quote from Reihaku Museum
Monobe masks and the Izanagi-ryu
. . . .  masks are several from the Monobe area in the eastern part of Kochi Prefecture. Other Monobe masks in storage at the museum bring the total of Monobe masks to eight (all are reproductions). 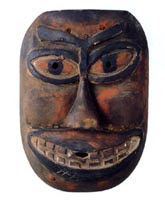 As masks that are used in performing arts such as kagura and plays and that are the object of prayers and worshipped as embodiments of deities, folk masks from all parts of Japan have been handed down with strong links to local religious beliefs. Monobe masks also have strong local associations and have typical designs. In their case, however, they are linked to a folk religion called the Izanagi-ryu, which is still practiced in the area today, and as such they provide insights into a distinctive folk belief and usage.

Masks for placating evil spirits
In Monobe it is not uncommon to find households that worship the spirits of ancestors in the ceiling as miko-gami -- onzaki-gami and Hachiman-shin, as well as taka-gami, deities with high status. In these homes, believers of Izanagi-ryu called tayu are called upon to perform yagito prayers between November and February. In addition, every ten to thirty years a grand festival of yagito prayers called the Takujin-sai is held at a family's home. As well as taking place inside the home, a large ritual altar is built in the garden to worship the sun and the moon as part of the Nichigetsu-sai (Sun and Moon Festival).

The Nichigetsu-sai is held at the end of the Takujin-sai, which lasts for approximately one week. In addition to family members and relatives, local villagers also gather for the festival. Up until around the mid 1970s, people wearing masks performed a humorous play.

For example, a play might show the comical antics of a go-between running to and fro between two families to carry out marriage negotiations, or a play in which a performer wearing the mask of an old man goes into the mountains to gather wood or food. In the case of this second theme, the audience might ask to see the old man puffing on a cigarette while resting. While this jesting might make the audience laugh, it is interesting to note that such performances were followed by rituals enacted by a Izanagi-ryu tayu wearing a mask in which the tayu placated the spirits of rivers and mountains. One such ritual is called "Henbai," which originates from Onmyodo (lit: the way of ying-yang), in which spirits of the earth are placated. In Monobe, situated deep in the mountains, people were afraid of the spirits of animals and trees, which were frequently the cause of calamities such as sickness, and regarded them as evil spirits. People believed that masks had magical powers which could placate such mountain and river spirits.

Twelve Hinago Mask
Rekihaku's collection of Monobe masks includes a mask called the "Twelve Hinago" mask. This mask is one of a set of seven masks that has survived, and as the name suggests, there was originally a set of twelve masks.

There is an interesting story about this set of twelve masks. It was said that if food such as riceballs were left as offerings for the masks, during the middle of the night they would take axes or saws and go and fell trees and bring back the wood. It is said that the reason why there are only seven masks today is that five masks died after having been pinned underneath trees. The Twelve Hinago masks were made from a single piece of wood and all of the remaining bits of wood were burnt. It is said that the spirit of the tree was incorporated in the masks and that when all twelve were together they possessed an awesome power.

Nestled deep in the mountains, felling wood has been an important occupation in this area since the Early Modern period. These woodsmen were called soma. According to a chilling yet mysterious story told by these soma working in the mountains, at night they could hear the sound of trees being felled by the ghosts of soma from days gone by, but when they went to the source of the sound there was no-one there. It is interesting to note that the tradition of the Twelve Hinago masks is related to this occupation in Monobe.


Shiki-kui Masks
In Monobe, better known than the Twelve Hinago masks are the paper cutouts modeled on chicks that are hung from thick ropes hanging down from the four corners of the stage where Izanagi-ryu kagura is performed. Possessing magical powers that repel evil spirits and non-believers, these cutouts act as barriers that stop evil spirits and non-believers from coming onto the stage and disrupting festivities and bringing calamity to those present. The mask's name "Twelve Hinago" is also related to this kind of Izanagi-ryu ritual.

According to the Izanagi-ryu folk religion, in addition to the aforementioned yagito prayers said at the homes of individuals and the Takujin-sai festival, prayers are also said to heal the sick. At one time, however, people also requested prayers that took the form of spells that brought misfortune to others.

Today in Monobe the term "shiki wo utsu" is used to refer to the recitation of spells by not only tayu, but also by ordinary people. There was a mask that used to repel such spells. Called the shiki-kui mask, it would eat up the spell, thus rendering it powerless. It was made as one of the Twelve Hinago masks and featured horns. According to the journal "Religious Rituals" published in 2000 by Toyonori Komatsu, an Izanagi-ryu tayu born in 1923, at home only the master of the household was allowed to touch the mask .The author refers to the mask as a "troublesome mask," as the family had to abstain from eating meat on non-religious days as well. Certain daily rituals were required of the owner of the mask if the mask was to exhibit powers capable of repelling others.

Although the oni (devil) mask held in the Museum's collection does not have horns, it is painted red and is adorned with large gold eyes and has tusks at the edge of its mouth. Possessing a countenance that is far more frightening than any other of the Monobe masks, one may presume that this is a shiki-kui mask. 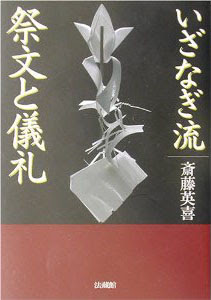 Every family has its own patterns of devine sticks. 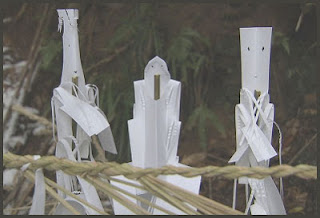 
Izanagi (イザナギ, recorded in the Kojiki as 伊邪那岐 and in the Nihon Shoki as 伊弉諾) is a deity born of the seven divine generations in Japanese mythology and Shinto, and is also referred to in the roughly translated Kojiki as "male-who-invites" or Izanagi-no-mikoto ("Lord Izanagi"). It is also pronounced Izanagi-no-Okami ("The God Izanagi").
source : en.wikipedia.org 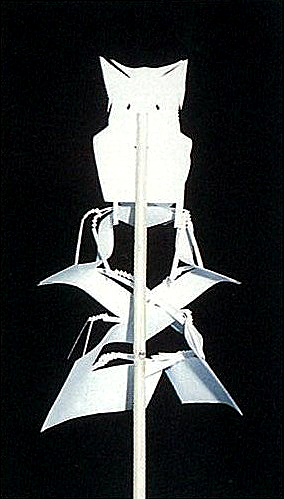