In the first half of the first month (February) of 1820, a couple of weeks after the end of the year evoked in Year of My Life, Issa composed in his diary a series of five hokku on The Tale of Genji, probably Japan's most famous work of prose fiction, written by Lady Murasaki in the early 11th century. The Genji hokku begin with the fourth hokku in the series translated below, since the first three hokku help to establish the context. A few comments follow after the translations.


as tasty as human flesh!
I set the louse crawling
on a pomegranate


a louse in paradise --
I let it crawl into
my sleeve


don't cry, don't cry
or a demon will get you --
night shower in winter


Kiritsubo
Prince Genji lost his mother when he was three, and I also lost my mother at three.

we're both motherless
but I'm a firefly
that doesn't shine

6. ame no yo ya hachi no botan no shina-sadame


brushwood fence --
escaping a bad direction
in a cool shadow

how dear she was
how beloved -- a cicada's
cast-off cloak

In the first, half-humorous hokku, Issa continues with a theme he develops in Year of My Life: the importance of not killing other creatures. It was believed that the taste of pomegranate fruit was similar to the taste of human flesh, so Issa, not wanting to kill the louse, hopes to keep it satisfied by taking it from his skin placing it onto the skin of a pomegranate.

In the second hokku, Issa allows another louse to go inside his wide sleeve, where it can bite his arm and other parts of his body. The blissful louse seems to be in paradise -- literally on the Buddhist Other Shore, which to Issa usually meant the Pure Land -- and Issa doesn't want to spoil its rapture. One other interpretation would be that the time is now the spring Other Shore (Higan) prayer week, centering on the vernal equinox, about five weeks after Issa is writing. During this time of deep thought and prayers, Issa might feel he must not kill lice:

spring prayer week --
I let a louse crawl
into my sleeve

However, this reading would imply that at other times killing lice might be permitted.

The third hokku creates a lullaby-like rhythm, though the soft song is Issa's interpretation of the sound of the cold night rain shower outside. The early thaw that year may also have reminded Issa of lullabies -- perhaps of lullabies his wife used to sing to his young daughter, who died on 6/21 of the previous year. The content of the song sounds frightening to adults, though it was typical for Issa's time. But who is the rain singing to now? Is Issa telling himself not to give in to self-pity and further weeping for his daughter? Is Issa remembering a part of a song his mother sang to him when he was very young? Are his memories eating into his body and mind a little like lice?

The fourth hokku has the name of a female character from The Tale of Genji placed before it. A young woman referred to as Ukifune, Floating Boat, is being pursued by two rival courtiers from Kyoto in the final chapters of the long novel/tale, chapters that follow the death of prince Genji, the main male protagonist. It seems a little surprising that Issa would begin his series of hokku on Genji with a character from the end of the book, after Genji is gone, but perhaps Ukifune, who becomes deeply unhappy about being the object of two men's competition, seems to express Issa's own feeling of loss after the death of his first two children.

The hokku evokes one of the rivals, the playboy prince Niou, whose name means a perfumed scent. He is very dashing and handsome, and he is compared with a bush warbler (uguisu) singing sweetly in early spring at one point in the book. In the hokku, the warbler is singing outside Issa's thatched house, while the scent of the plum blossoms comes inside the house. Issa himself seems to be in the position of the woman Ukifune, into whose country house in Uji prince Niou slips in Chapter 51 of Genji and abducts her like the demon in the previous hokku. The sweet-talking prince takes Ukifune to a rundown house and there seduces her, causing her to later attempt suicide and, when that fails, to become a nun and reject both suitors. This hokku makes one wonder whether Issa or his wife had contemplated suicide the previous year.

The fifth hokku leaps to the first chapter of Genji, named after prince Genji's mother, deeply loved by the emperor but without any powerful relatives to support her at court. Constantly harassed by those at court jealous of her closeness to the emperor, Kiritsubo falls ill and returns home to the country, where she soon dies. Genji is only three at the time by Japanese counting, Issa's age when his mother died. Issa enjoys this formal similarity, which ironically makes him feel lacking in almost everything Hikaru Genji, the "shining prince," had. Issa half-humorously compares himself to a firefly which can't shine (an image that makes this a summer hokku). Still, he may be acknowledging that many of the women prince Genji loves in the book are similar in some way or another to Genji's dead mother. Is Issa also suggesting that he feels his wife reminds him of his mother and her lullabies?

In the sixth hokku Issa again continues to compare himself with prince Genji. In one of the most famous scenes in The Tale of Genji, in Chapter 2 the 17-year-old Genji and some other young men pass time on a rainy summer night by describing different kinds of women and discussing which type is most attractive. It is a thoroughly young-male-centered discussion which Lady Murasaki evokes with wonderful irony, though many generations of male readers have given the scene such a special prominence, as if it were a key to the whole novel, that the phrase "appraising/judging on a rainy night" has entered ordinary Japanese as an idiom. Issa seems to be using it mainly ironically, as a foil against which to compare himself.

Although Genji and other courtiers were constantly having affairs with beautiful, intelligent, and sensitive women who could write outstanding waka at a moment's notice, the only thing Issa has to judge on this rainy night are some winter peonies lined up in pots -- although he is not, of course, denying the beauty of the peonies. Or perhaps this is a summer verse, since the rainy night in Genji takes place in summer, and in this hokku it may be that it is the season in Genji that is most important. In any case, Issa seems to be indirectly mourning the loss of his mother and his daughter.

In the seventh verse, Issa compares himself a third time with Genji, who consults a yin-yang fortune teller before he travels outside the palace. If the direction in which he wanted to travel was full of negative energy on a certain day, his route would be changed, and he would stay the previous night somewhere in a safe direction and then set out from there for his destination the next morning. This seems to be a summer hokku, so Issa is probably continuing to refer to Chapter 2 of Genji, in which the rainy night scene is followed by a section on prince Genji avoiding travel in a certain unlucky direction. Issa may be overlapping himself with the prince and redefining the meaning of "bad/dangerous direction." For Issa bad seems to mean walking in the heat of the sun on a hot summer day, and a good/lucky direction is one in which there is cool shade. He stays close to a brushwood fence and may now be standing in the shadow of the house beyond the fence.

The eighth hokku has a headnote that refers to the name Lady Murasaki gives a women prince Genji loves in Chapter 3 of the book, Utsusemi, or Cicada Shell Woman. After a single night of love, the woman rejects Genji, and when he is helped by her brother to spy on her in her home, she catches the scent of his incense and rushes off, leaving behind her outer cloak, which she'd taken off in the summer heat. Not long after, Genji writes a poem comparing her outer cloak to the shell left behind by a cicada. Genji later tries again to approach her, and he is again unsuccessful: after her husband's death she becomes a nun. The hokku represents Genji's feelings toward Utsusemi after her refusal to meet a second time, but Issa also seems to be playing on another meaning of cicada shell, a common image for mortality and the transience of all things. Genji's loss of Utsusemi and his obsession with the cloak she left behind are matched by Issa's loss of his beloved daughter and his inability to stop thinking about her.

After these hokku about prince Genji, the hokku in Issa's diary seem to return to the present of the first month, and the subjects change back to images typical of that season. The way Issa momentarily overlaps himself with and also distances himself from prince Genji is striking, as is the mixture of an elegiac tone with ironic humor. The images also probably reflect the simultaneous efforts of Issa and his wife to make another child, and they certainly succeeded, since their second son Ishitaro, or Big Rock, was born nine months later. 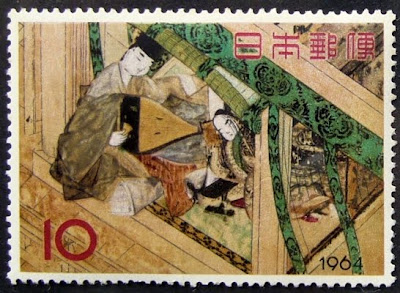