a popular song of the Edo period.
This kind of song had been popular in Kyoto for a long time, now popular as kayoo 歌謡 song.

The singer of a Rosai song is accompanied by a shamisen. He can make up a text as he goes and as the situation calls for.

It began to appear in the pleasure quarters of Kyoto in the Kanei period ((1624‐44) and then moved on to Edo as 江戸弄斎 Edo Rosai .
From the Edo version evolved another popular song called nagebushi 投節.

Another popular humorous song evolved as the dodoitsu 都々逸節 in the form of 7 7 7 5.

Now there is also enka 演歌 and karaoke カラオケ as entertainment and song.


Legend says the name comes from a monk named Roosai 弄斎 Rosai, who used the popular
Ryuutatsubushi 隆達節 Ryutatsu song and added the shamisen player to it.
The singer can also dance or rather move his legs in a funny way to accompany his words, while the onlookers hum the tune with him. 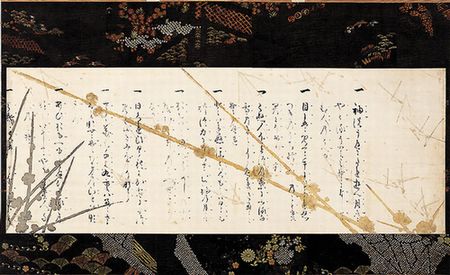 Ryuutatsu 隆達 Ryutatsu (1527 - 1611)
高三隆達 Takasabu Ryutatsu
was a monk of the Nichiren sect. He lived in the town of Sakai near Osaka.
He was gifted in song, painting and reciting the sutras with a powerful voice. He also collected popular songs of his time. 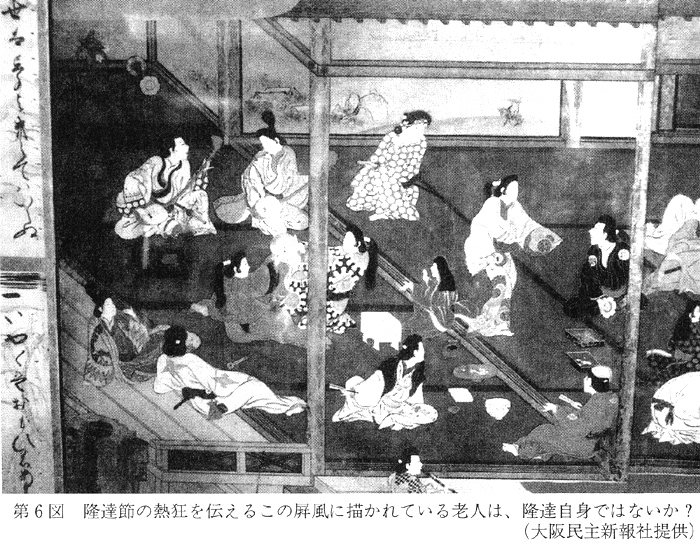 This is a folding screen with people enjoying the Ryutatsu song.
The old man in the painting might be Ryutatsu himself ? 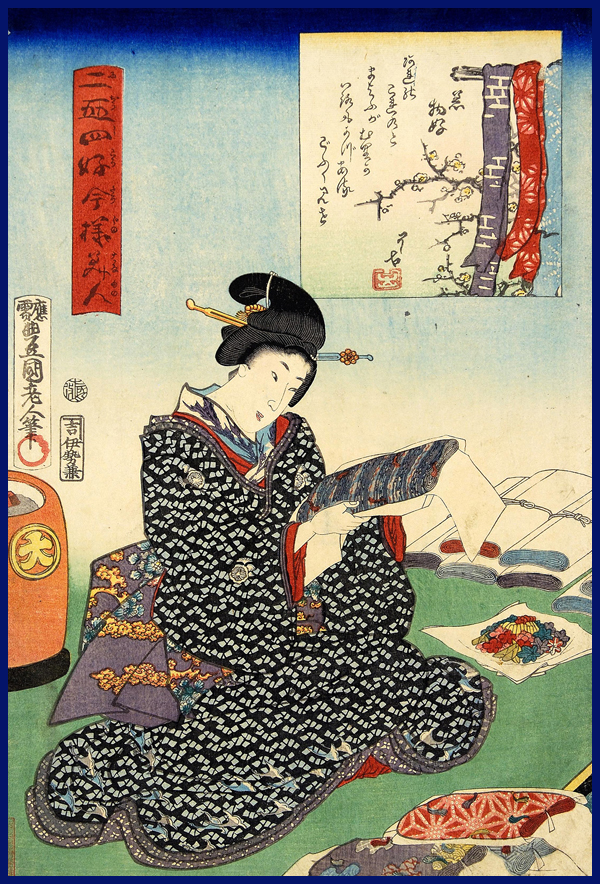 - quote -
Contemporary Beautiful Women who Like Kimono
今様美人 着物好 (Nijūshi Kō Imayō Bijin)
The Twenty-Four Paragons of Filial Piety is a Chinese book about 24 people who possesed filial piety who would be model sons/daughters for coming generations. In consideration of the policy of the Tokugawa shogunate that promoted Confucianism, this was used as a textbook at a temple school.
In immitation of this book, Contemporary Beautiful Women Who Like Kimono covers 24 women.
- source : Tokyo Metropolitan Library -

The hookan 幇間 male entertainers of the pleasure quarters of Edo made this song quite popular.

The yakko here are male servants who took care of the straw sandals of their masters. In the Edo period it was custom to take off the sandals when entering a room. Rich people had a servant to hold the sandals while the owner was inside and rush to the entrance when he appeared to go home, putting the sandals in front of him to step in easily. 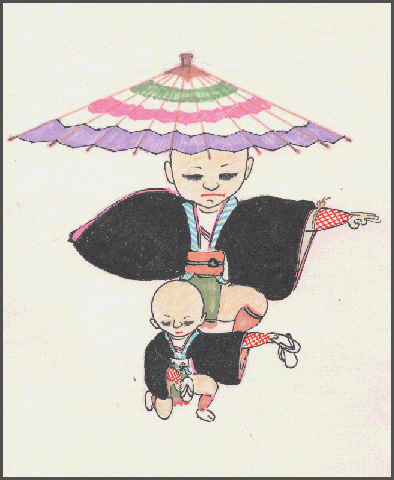 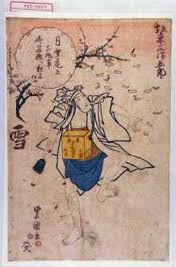 
quote
imayoo, imayō 今様 Imayo, popular song , imayoo uta 今様歌
Imayo is an old Japanese word meaning "modern" or “nowadays,” and also refers to a certain type of songs which came to popularity for its new and new style in the 11th century to the 13th century in Japan. Although the Japanese culture had been dominated by aristocrats until then, Imayo arose among the people and then attracted aristocrats.

The themes of imayo songs ranged widely. Religious beliefs were often expressed in imayo, but people sang about love and other ordinary things as well as Buddhist hymns and pilgrim songs.
snip
Imayo Awase: Song contest in the Heian period
In ancient times, there was a unique contest format in Japan in which two sides of contestants, the Left and the Right, strive for mastery of various kinds of skills. This contest format was called awase-mono.

In imayo awase, singers were selected respectively from the Left and the Right sides, and they sang imayo songs that they spontaneously made themselves to compete on voice, and melody and intonation.
snip
Nihon Imayo-Uta Bu-Gakukai ( Japan Imayo Society)
Imayo declined around the 13th century. There have been literatures and illustrations describing imayo and therefore it is possible to understand to a certain extent what imayo was like in terms of lyrics and words, and costumes. However, there was of course no recording device to record rhythm and melody of imayo from the time of the Haian period.

Nihon Imayo-Uta Bu-Gakukai (Japan Imayo Society) was founded by Taizan Masui in 1948 in Kyoto in hope of revival of imayo as a great performing art. Based on his study, the unique rhythm and melody, and choreography of imayo have been reproduced. Nihon Imayo-Uta Bu-Gakukai provides performances of imayo in various locations under Satsuki Ishihara, who succeeded the rhythm, melody, and choreography
source : imayo_english.pd 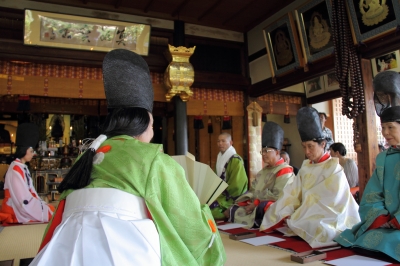 
Emperor Goshirakawa 後白河天皇 Go-Shirakawa (1127 - 1192)
was very fond of the Imayo dance, which he had studied with a Geisha in Kyoto.
... he probably discerned in imayo a possible means of revitalizing court music.

- quote -
Songs to Make the Dust Dance - Go-Shirakawa and Imayo
Emperor Go-Shirakawa played a crucial mediatory role in the history of imayo . Under his aegis, a number of imayo concerts in which asobi or kugutsu participated were held in his palace. In addition to performing, these singers actively participated in informal critical discussions on imayo as an art form, demonstrating their mastery and esoteric knowledge of the medium.[68] What emerges from these occasions is a picture of an unusual artistic moment, in which upper and lower classes interacted in a special and creative milieu.

As his memoir indicates, when it came to imayo Go-Shirakawa did not hesitate to associate with members of the lower classes; in fact, he sought them out as his musical instructors and companions: "I associated not only with courtiers of all ranks, but also with commoners of the capital, including women servants of various places, menial workers, the asobi from Eguchi and Kanzaki, and the kugutsu from different provinces. Nor was this company limited to those who were skillful. Whenever I heard of any imayo singers I would have them sing together, and the number of these people grew quite large."[69]

...The memoir chronicles his growth as a practitioner, patron, connoisseur, and authority as the head of his own school of imayo singing. He opens the memoir by detailing his long and arduous training. It was not unusual for him to forgo sleep for days or to endure physical discomfort in his efforts to master the art. His interest was not transitory, as some around him may have assumed. It seems clear that the aesthetic satisfaction he derived from imayo was in no way inferior to that which other courtiers found in waka . He wrote:

I have been fond of imayo ever since my youth and have never neglected it. On balmy spring days when cherry blossoms open on the branches and then fall to the ground, and in the cries of the bush warbler and the song of the cuckoo, I have perceived the spirit of imayo . On lonely autumn nights as I gazed at the moon, imayo added poignancy to the cries of the insects. Ignoring both summer's heat and winter's cold, and favoring no season over another, I spent my waking hours in singing; no day dawned without my having spent the whole night singing. Even at dawn, with the shutters still closed, I continued singing, oblivious to both sunrise and noon. Rarely distinguishing day from night, I spent my days and months in this manner."

He was clearly not pushed to study imayo , but rather found it to be the most congenial medium of self-expression. In writing about the art form, Go-Shirakawa employs the same poetic idiom and images usually associated with waka aesthetics: the spring and cherry blossoms, bush warblers and cuckoos, and the autumnal moon and the cries of insects. For him, waka's refined sentiment of aware could be evoked equally well by imayo ; if waka helped to heighten one's aesthetic sensibility, so did imayo . Indeed, in power, utility, and effect imayo is just as potent as waka , if not superior. 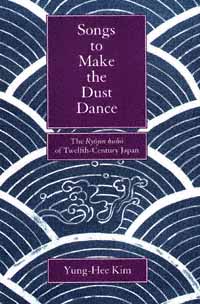 In the late Edo period an entertainment establishment named 藁店亭 Waradana Tei was built and 都々逸坊扇歌 Dodoitsubo Senka the First (1804 - 1852) was active here.
He was a singer- raconteur who scored his greatest triumphs singing dodoitsu and other popular songs.
In the Meiji period, this became the 和良店亭 Waradana Tei, where 夏目漱石 Natsume Soseki used to come visiting.

Dodoitsu (都々逸) is a form of Japanese poetry developed towards the end of the Edo Period.
Often concerning love or work, and usually comical, Dodoitsu poems consist of four lines with the syllabic structure 7-7-7-5 and no rhyme for a total of 26 syllables, making it one of the longer Japanese forms. The form, tone and structure of Dodoitsu derive from Japanese folk song traditions.
.
https://edoflourishing.blogspot.jp/2017/03/ushigome.html
.