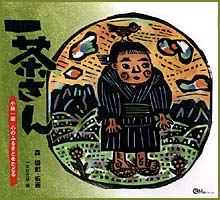 we humans
in a field full of small stones
fleas jump on us
Tr. Chris Drake

This ironic, humorous hokku was written in the intercalary 6th month (July) of 1827. A variant from the same year has a different middle line:

These hokku are part of a group of hokku about fleas placed in Issa's diary at the beginning of the section for the 6th intercalary month, so they were probably written in response to a major event in Issa's life -- the great fire that broke out in his hometown on the first day of the month and burned down Issa's house together with eighty-two other houses. Luckily the earthen-walled storehouse near his house wasn't burned, and soon it was turned into a simple living space for Issa and his third wife. A little more than a year later, however, Issa died.

The hokku and its variant translated above seem to be concrete and written in response to the great fire rather than abstract statements about the whole world of human existence. The phrase translated as "human world" sounds abstract and general in English, but in Issa's time it mainly meant something like "human relations" or "among/between humans/people" or "for humans." In a Shinto context the phrase meant "the age of humans" as contrasted with "the age of the gods" in ancient myths, and in romantic contexts it mainly meant "relationships between men and women." In the hokku translated above Issa seems to be using it to refer to how the human inhabitants of his hometown look at the fire in contrast to how the other creatures affected by the fire, especially the fleas, reacted. It is in contrast to these creatures that Issa seems to invoke the human world or point of view. The two hokku seem to imply that both humans and fleas are interdependent and need to understand each other better.

Issa does not seem to be assuming that he is living in a degenerate, hopelessly corrupt age. In the early medieval period most schools of Japanese Buddhism embraced the notion that in 1052 Buddhism had entered the last and worst of three historical periods, known as the Mappo Age, or the Age of the End of the Dharma, in which extraordinary methods and approaches were needed because disasters and corruption were gradually destroying the fabric of society and the ability of people to understand the Buddha's message. However, by the 17th century, when centuries of civil war were finally brought to an end and cities and towns began to prosper, this pessimistic worldview was largely replaced by world-affirming interpretations of Buddhism, and in Issa's time it was often said that "Buddhism is at high noon" (buppou no hiru).

Many new temples had been built; roads were safer, allowing believers to make many pilgrimages; and woodblock printing meant commoners could afford books about Buddhism and have copies of sutras in their homes. Generally speaking, Japanese commoners embraced optimistic and world-affirming ways of thought, and Issa's famous love of the world as it is, in spite of the many hardships causes, reflects this general optimism pervading commoner thought and folk religion and draws on the optimistic belief in the True Pure Land school that the Pure Land could be experienced in this world. Issa here and there writes hokku that are obviously critical of the samurai class and of corrupt officials and merchants, yet he is rarely pessimistic, and he doesn't condemn the world or his age as a whole.

In the present hokku, the aftermath of the big fire is evoked with amazing affirmation. The small stones and sand in the two versions of this hokku may well be references to Issa walking through the ruins of walkways or gardens near the smoking remains of his home or in the ruins elsewhere in his hometown. Perhaps the field full of small stones is a gravelly area, since gravel is commonly used in Japanese architecture, but it could be a field where people whose houses burned gather after the fire. Normally lice wouldn't be found in sandy, gravelly, or rocky areas, but because of the fire the lice, too, had to suddenly leave the houses in which they lived and take refuge outside. In this context both versions of the hokku appear to be full of black humor.

The "human world" here seems to be the fragile world of transient human houses and relationships that, in the long run, can't escape radical change and even disasters, yet in the flea world the shock and sense of loss after the fire is if anything even greater. Just a day earlier the fleas were living in luxury in human houses and burrowing into the skin of the inhabitants and their pets just as they wished, but now, because of a human-caused fire, they find themselves homeless and forced to jump onto humans from inhospitable sand and small stones. As for the humans, what more needs to be said? Wherever they stay in the future, they're fated to act once more as well-stocked flea houses. The upside is that if humans and fleas realize they're partners for life, then they can begin to better understand each other's point of view.

The fire that burned down Issa's house did not throw the weak, ageing Issa into despair, and he has several humorous hokku from this period. For example, the very first hokku after the fire is this:


Even though Issa's house has burned down, Issa assures the mother flea that she and her children will surely find a new dwelling soon -- as soon as Issa himself does. And, in the hokku just before the first hokku translated above in Issa's diary, Issa realizes what a large effect his own absence from the ruins of his house will have:

poor scrawny flea,
the owner of the house
will be away awhile!

hey, lice
even you guys are here
to view the blossoms
Tr. Chris Drake

This humorous hokku is from the 3rd month (April) of 1815, when Issa was traveling around near his hometown. Issa addresses the lice directly, strongly, and informally to remind them of something important. They're not just any lice. They're "blossom-viewing lice," the name for lice in late spring when they appear on and in people's sleeves and collars as the weather warms and the cherry blossoms reach full bloom. The hokku seems to be set during an outing to see the cherry blossoms.

As Issa scratches himself he tells the lice how beautiful the blossoms are, as if they would notice and stop biting him. He even uses (in this context) a mock-polite form (de sourou) to stress how beautiful the blossoms are. No doubt Issa would like to view the beauty of the blossoms together with the lice, but lice will be lice, and the second best thing to that is the realization that all the beings in the area, including cherries, lice, and humans, are regaining their vigor and acting even more like themselves than they were earlier in the spring and are thus "blossoming" as themselves, another meaning of the word hana, "blossom."

For some reason Issa's collected works insert the particle ni at the end of the second line instead of de, the more usual particle, especially in a colloquial context when the polite verb sourou is used as a verb of existence. Issa's diary doesn't bother to give the particle, since it is presumably obvious, but an anthologized version from the same year gives de. Recent Japanese editions also give de for the hokku, and I follow their usage.

This hokku is a variant recorded by Issa's follower Kijou (希杖). The original version of this blackly humorous hokku is found in a letter by Issa to his student Shunkou who, with his wife, sometimes linked renku with Issa. The letter is dated intercalary 6/15 (August 7) 1827, two weeks after Issa's house burned down in a great fire that destroyed eighty-three houses in his hometown on July 24. In that letter the hokku goes:

Both versions seem to have been written soon after the fire, when the charred ruins and ground beneath were still warm. The ground must have been at around the temperature of the human body, a temperature that fleas love, and Issa is surprised at how happy they seem in his former house. The first version stresses only the warmth of the ruins, which seems to make the ruins a living presence to the fleas, while the variant suggests that both the ruins and fleas are warm -- the fleas probably in the further sense of hot, excited, acting more energetically than usual. In both versions Issa seems happy for the fleas and glad that at least the fleas can find something good in the aftermath of the fire and continue to live in what was his house, though he also suggests the fleas are literally walking "on the roof of hell," as he once put it, since the ground and ruins will soon be cold and then frozen when winter comes. Which is about the same as what Issa can expect in the future

Right after the fire Issa and his third wife Yao had to leave the area where their house had stood. Issa went to visit some of his students, completing several kasen renku sequences with them, and returned, after the storehouse had been renovated and its roof replaced, on 11/8 (Dec. 25, 1827), more than four months after the fire. Until the fire, the storehouse had been used mainly to keep valuables, including Issa's many books and probably some of his manuscripts, and it had to be completely remodeled as a living space. The radical changes caused by the fire and the very cold weather must have put a great strain on Issa, who was already frail, and he died in the storehouse eleven days later, on 11/19 (Jan. 5, 1828). Issa's wife was pregnant, and Issa's only surviving child, a daughter, was born in May.

Issa's storehouse is kept in good condition even today: 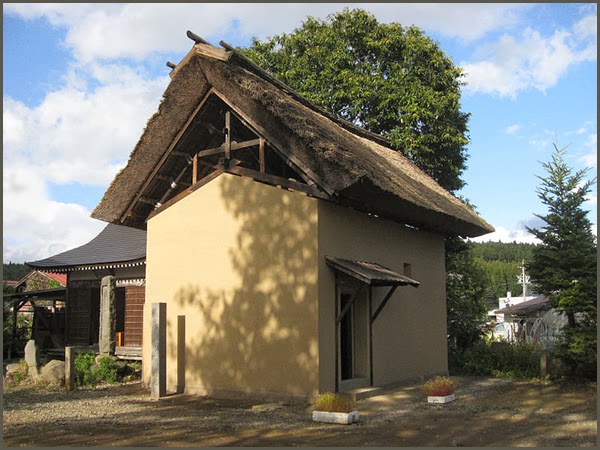