The local lords had to have a residence in Edo at all times.

quote
One of the residences granted to daimyou 大名 by the Edo government, as part of the system where feudal lords were compelled to spend alternate years away from their provinces, in Edo.
A daimyou's main residence in Edo was called kamiyashiki 上屋敷; the shimoyashiki, located outside of central Edo, was an additional residence used as a refuge in emergencies, or as a holiday retreat. Another spare Edo residence was the nakayashiki 中屋敷, usually inhabited by the younger generation who will succeed to the daimyou.
source : JAANUS

This report focused on the visual relationship between daimyo yashiki (daimyo's residence) and water, through old pictures and photos.

Many mansions of daimyo were built along the waterfront and along the Sumida River in Edo. Many of them were shimo yashiki (a spare residence of daimyo located in the suburbs) with gardens, where the view toward the ocean or a river was important as borrowed landscape (shakkei) of the garden. For example, Hamayashiki of Sadanobu Matsudaira (Fig.1 Fukagawa) was built for water view from a shed called Shogetsusai, by borrowing the ocean view as the pond in the garden. In other mansions for daimyo, creative spaces for water view were commonly found such as a kind of lookout tower and tsukiyama (artificial hill in a garden). Meanwhile, the mansions with water view were not limited to waterside shimo yashiki; mansions on the upland of Yamanote (High City) had often the view of the bay of Edo.

The third storey lookout tower in a daimyo yashiki was based on the awareness of water view. Naka yashiki of the domain of Shimabara (Shimabara han) of Mita had three- storey building called "Tsukinami-rou", which was compared to Tungting lake (洞庭湖) and Yueyang tower (岳陽楼) in China ("Views of famed edo spots"). Other three-storey buildings were naka yashiki of Matsuyama-han on the north side of the Tsukinami-rou, Shimoyashiki of Shibata-han (Fig.2 Kobikicho), and kami yashiki of Hitotsubashi-Tokugawa family (wthin the Hitotsubashi-mon (gate)). The characteristics of "culture of view" in Edo focusing on the visual relationship with "water" can be seen in the locations or buildings of daimyo yashiki.

On the other hand, the buildings of daimyo yashiki composed the view of urban space of Edo. Though excluded from the list of notable spots, daimyo yashiki had been the original architecture of the Capital, Edo, attracting attentions of people by their magnificent facade. While daimyo yashiki can rarely be found in pictures, they had been often drawn in combination with water; e.g., kami yashiki of Saga-han (within the Yamashita-mon) painted in "Edo Shokei" by Hiroshige Ando, kami yashiki of Hikone-han (Fig.3, Sotosakurada) and kami yashiki of Nobeoka-han (Fig4, Toranomon). The waterside mansions were painted as a beautiful notable spot, and the water provided the spatial spread highlighting the architecture. 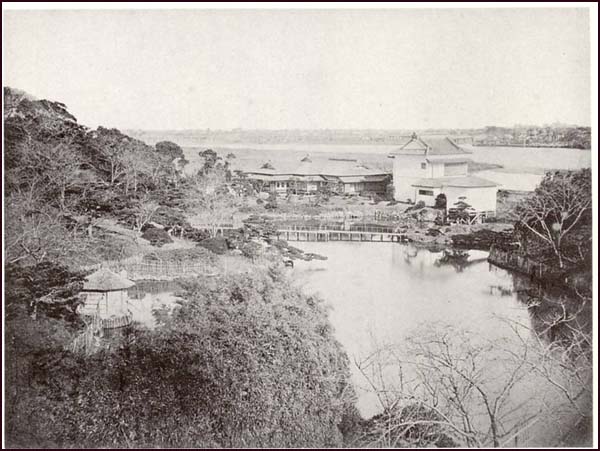 In the Meiji era, mansions of nobility often took over former daimyo yashiki along the Sumida river, such as Hakozakitei of Yamauchi family (former lord of Tosa-han) (Fig.5 Shimo yashiki of former Tayasu-Tokugawa family). These residences had gardens and buildings with scenery, obtained by famous feudal domains in the early years of Meiji. This fact may show that water view had been considered as one of the values of a residence.

the war lord's
nightingale
is an apprentice
Tr. David Lanoue