This was done not only at home but in temples and shrines too. With long bamboo poles and sakaki sacred branches the bad influences of the passing year, the vicious demons hiding somewhere in the corners and the roof beams, were cleared away, together with the real soot. 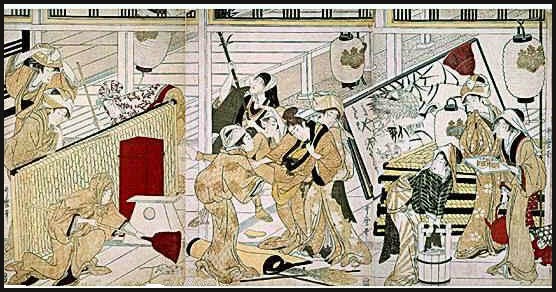 Making a gesture
of sweeping the cobwebs,
I leave it at that.
Tr. Max Bickerton


my hut's soot--
going through the motions
of sweeping it
Tr. David Lanoue

my hut's soot--
I go through the motion
of sweeping it
Tr. David Lanoue

singing practice
every morning
with the warbler

These two hokku appear in this order in Issa's diary for the 12th month (January) in 1814, a few months after he had finally been able to move into the half of the house left to him by his father in his hometown. It is the first time Issa has experienced various year-end activities in his own house, and he is honest about his lack of interest in housekeeping. In the middle of the 12th month almost everyone in the village is doing a big year-end cleaning -- washing everything and sweeping not only the floors but the soot-covered pillars, beams, rafters, and dark corners -- yet Issa feels no need to do anything but move his broom around for a short time, and he soon gets bored with his own pretense.

Bush warblers (Heronries diphone) have begun to sing again, though it's still a couple of weeks before the new year and lunar spring. In the 12th month not many people listen to them, but Issa hears one loud warbler outside singing morning after morning, and he feels the bird must be practicing its song so it will be perfect when the New Year comes and people strain to hear the "first warbler song" of the new year. Hearing it every morning, Issa seems to find himself repeating the warbler's call to himself and wonders if he, too, needs to improve his warbler singing technique.

It is also possible to read the second hokku as, "every morning it practices singing uguisu." However, if Issa intended uguisu to be the sound the bird makes, I think he would probably have used katakana syllabic letters. There is a folk etymology that takes the name bush warbler (uguisu) to be onomatopoetic, this theory is not widely accepted. Issa seems to have believed the bird's name originally meant "first appearing deep in the mountains" (oku ni izu). In Issa's time the main call of the warbler was usually described as hou-(hou-)hokekyo, a sound that suggested, when translated, Lo-Lotus Sutra or Lo-Lo-Lotus Sutra.

Here is a good recording of the call:
- http://www.youtube.com/watch?v=oftfpDAfLHE

By putting these two hokku next to each other, Issa might be suggesting that for him it's more important to learn about other voices and improve his singing/writing than to clean all the sooty beams in his house.


名月や松の天窓の煤もはく
meigetsu ya matsu no atama no susu mo haku


and many more - 76 haiku
- translations by David Lanoue -

- Utagawa Toyokuni III
This illustration shows the scene of Susuharai, the annual custom of indoor cleaning and the cleansing of shrines. In the Edo period, Susuharai was set to take place on December 13th and so this was a kind of Shinto event called such names as
'Jū san-nichi (13th) Sekku' 十三日節供（せっく）.
The tradition called "Susuharai", or the year-end cleanup, was enjoyable only when all the work was finished. As it can be seen in this painting, people enjoyed eating onigiri (rice balls) and nishime (simmered vegetables) contained in a lacquered box. This was called "osame no iwai" (celebration of finishing the cleanup) at which the food and wines were offered to the people who joined the cleaning.
During the occasion, some people were being tossed in the air in celebration and others made a special performance. Indeed, this ukiyo-e depicts not only the occasion of "susuharai" actually held at the end of each year, but represents another meaning.
This nishiki-e (colored wood-block prints) was published in November, 1855 (Ansei 2), which was one month after the Ansei Earthquake. It has been pointed out that this painting has a purpose to let the public know of the fact that these actors survived the earthquake, as it can be understood that this depicts the neighborhood of Saruwaka-cho, as the rooftop of Sensōji and the five-story tower are painted behind two people. These two people in this painting were supposedly popular kabuki actors such as Nakamura Kantarō and Iwai Kumesaburō, as Shibai-machi was still in chaos.
- source : Tokyo Metropolitan Library -

hey, you can play now
sparrows at the door --
I swept even the soot

This humorous hokku is from the end of the eleventh month (early January) of 1818, when Issa was living in his hometown. Issa's been doing a little cleaning, at least in his own way. "Sweeping soot" means cleaning thoroughly, that is, cleaning everything in a house or hall, even the soot in the rafters and corners. Usually a thorough sweeping at the end of the year took a whole day, but Issa seems to be apologizing to the sparrows just outside his door for inconveniencing them for a short while. Japanese farmhouses had a large open earthen floor area just inside the main door that was separate from the raised floor of the living space area, so the sparrows may have been hopping around just inside the partially open door looking for grains of food until the sight of Issa moving his broom scared them away. They are still nearby when he's finished, so he doesn't seem to have been sweeping very long. Perhaps he's briefly swept the area just inside the doorway, since it's the most prominent part of the house and seen by visitors. Issa directly addresses the sparrows with the interjection sore and the emphatic particle zo as if the birds were his friends. I think Issa says "even the soot" because he feels, in his personified universe, that the sparrows won't believe he could have finished sweeping in such a short time and will know from his joking tone that it's all right now to play in the doorway, since Issa thinks the same way they do.

In Issa's diary this hokku is followed by a confession:

Issa laughs at himself, implying he's tried hard not to disturb the soot, as if it were his friend and house companion -- although on one one level he might actually consider the soot to be his friend. Likewise, in the first hokku above, the tone seems to suggest, "Hey, it's time for us all to play!" The first hokku may even be a conscious self-reference to Issa's first known hokku, possibly written at age six, that asks an orphaned sparrow to play with him.