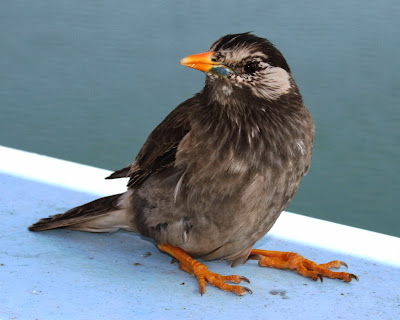 kigo for all autumn

"Country bumpkins" such as Issa were called "(gray) starlings" (mukudori) by sophisticated Edo-ites.
It also refers to migrant workers from the countryside who came to work in Edo during the winter months.

people get worked up,
blame "those starlings" --
it's cold tonight
Tr. Chris Drake

This autumn hokku is from the beginning of the eighth month (September) in 1815, when Issa was in his home province of Shinano. The exact circumstances aren't mentioned in the hokku, so it's impossible to be certain, but it's still three months before the migration season begins, and Issa is in or near his hometown, and not on the road traveling to Edo, so he probably wouldn't be mistaken for a winter migrant worker. As a child, Issa was probably called lots of names when he first arrived in Edo, but he lived in Edo for many years and was not a seasonal migrant to the big city. I take this hokku to be about some prejudiced people in Issa's home province who are criticizing to Issa or to someone nearby Issa the many migrant seasonal workers who leave Issa's home province and go to Edo to work every winter and then return in the spring as soon as fields need to be prepared for planting. In Issa's time more seasonal workers came to Edo from Shinano than from any other area, so they were often singled out for biased remarks.

Most of the winter migrant workers were poor tenant farmers who didn't own their own land and had a hard time making ends meet, and they were criticized by people both in Shinano and in Edo. People called them many names, especially "gluttons," since some spent much of what they made on eating out and drinking in Edo, "blockheads," since they didn't speak the Edo dialect or care very much about Edo customs, and "starlings" (literally, white-cheeked or gray starlings). "Starlings" seems to have had many meanings, but one was a reference to the fact that Japanese starlings gather together in huge flocks of tens of thousands of birds during the winter, making a lot of noise and treating the natural environment rather roughly.

Another sense of the word criticized migrant workers for staying in groups and not trying to mix with Edo people. Still another sense was that migrant workers wore clothes that looked as shabby as the feathers of the starlings. To some people living in Shinano the term also seems to have referred to migrant workers' alleged lack of interest in contributing to their own communities. "Starlings" was a very negative word, and when Issa heard it used on this night, he surely felt sympathy for the migrants. He probably also remembered the cold reception he himself received as an outsider when he returned to live in his hometown.

In 1819, however, the year evoked in Year of My Life, Issa himself was definitely called a migrant starling. In the eleventh month (December) he wrote:

I've become
one of the starlings --
cold evening rain

In Issa's diary this hokku follows a hokku about being called a starling, a hokku that also appears toward the end of Year of My Life. In a letter to his follower Toyuu written on 9/14 in 1820, Issa briefly explains how he came to compose that hokku:

Last winter on the third of the twelfth month I grabbed my walking staff and set out for Edo in the east. As I went along I composed this hokku, saying it out loud under my breath:

Just then wet sleet began splashing down and turned the whole road into deep mud. I still hadn't reached Usui Pass, which is very difficult for anyone to cross over, but my old legs were already worn out, so I turned around and retraced my steps until I'd returned home.

The coldness in the hokku of course refers equally to the weather and to Issa's feelings.

Did Issa set out in the eleventh month, as his diary suggests, or early in the twelfth month (January), as his letter says? In either case, he took to the road in simple robes at a time when large numbers of seasonal workers were also heading for Edo, and he was taken to be one of them. He was still in his home province of Shinano when he was called a starling, probably in villages he passed through as he walked along the Nakasendo road toward Edo, and the repeated slur must have hurt even more because it came from people so close to home.