. Samurai of the Edo Period - Introduction . 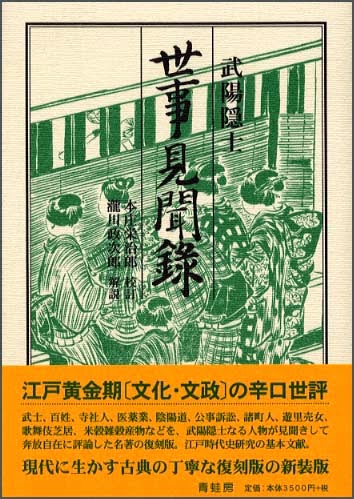 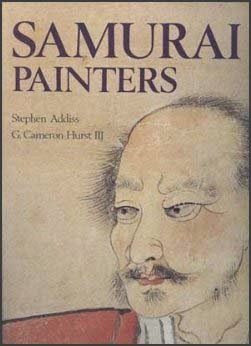 
Lust, Commerce, and Corruption:
An Account of What I Have Seen and Heard, by an Edo Samurai
by Buyo Inshi 武陽隠士
Translated by Mark Teeuwen, Kate Wildman Nakai, Fumiko Miyazaki, Anne Walthall, John Breen. 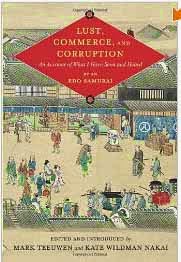 - quote
By 1816, Japan had recovered from the famines of the 1780s and moved beyond the political reforms of the 1790s. Despite persistent economic and social stresses, the country seemed to be approaching a new period of growth. The idea that the shogunate would not last forever was far from anyone’s mind.

Yet, in that year, an anonymous samurai author completed one of the most detailed critiques of Edo society known today. Writing as Buyō Inshi, “a retired gentleman of Edo,” he expresses a profound despair with the state of the realm and with people’s behavior and attitudes. He sees decay wherever he turns and believes the world will soon descend into war.

Buyō shows a familiarity with many corners of Edo life that one might not expect in a samurai. He describes the corruption of samurai officials; the suffering of the poor in villages and cities; the operation of brothels; the dealings of blind moneylenders; the selling and buying of temple abbotships; and the dubious strategies townspeople use in the law courts. Perhaps the frankness of his account, which contains a wealth of concrete information about Edo society, made him prefer to remain anonymous.

This volume contains a full translation of Buyō’s often-quoted but rarely studied work by a team of specialists on Edo society. Together with extensive annotation of the translation, the volume includes an introduction that situates the text culturally and historically.
- source : cup.columbia.edu 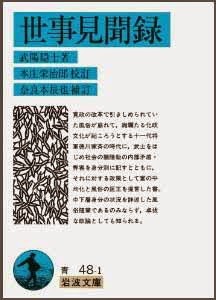 - quote
A firsthand account of vice and profit in Edo
By selecting it as the seat of his power in 1603, Shogun Tokugawa Ieyasu raised Edo from rural backwater to de facto national capital. Its ascension was swift, and the population nearly tripled in the century following the year 1650. By the time this book was written in 1816 by an anonymous samurai calling himself Buyo Inshi, Edo had nearly twice as many denizens as Paris.

In his account, Buyo pulls back the curtain on a diorama of Edo with an acerbic social critique that seeks in its roughly 400 pages to leave no stone unturned.

Beginning with warriors and farmers, he moves on to temple and shrine clergy, doctors, the guild of the blind, townspeople, rice agents, prostitutes, brothel keepers, actors, outcasts and more, outlining the position of each group within the larger society.

By extensively detailing the many schemes through which the poor scrape by and the rich bolster their advantage, Buyo evokes a world rife with avarice and moral decay. He longs for imagined bygone days when “the feelings of (the) people were clear and bright, without duplicity and never obscured by a single cloud or wisp of mist.”

Besides the intricacies and mechanisms of vice peculiar to his time and place, Buyo also frequently remarks on the general state of “the realm” and the people:

“People at the zenith of prosperity have grown numerous, and there are many who live in such comfort that they could not suffer hardship even if they wished to. … On the other hand, there is also a growing number of people who are so used to constant hardship that they are not even aware of their own misery. …
The rise of some and the fall of others are two sides of the same coin —  such is the unbalance of our age.”

Among the many social issues of his day, Buyo examines closely the culture of rampant litigation and the ways that townspeople leveraged lawsuits to gain advantage over warriors. The population drain from the provinces to the cities is also discussed, along with the impact of kabuki and prostitution, and a great many other elements of Edo life.

Besides being a fascinatingly detailed look into the culture and fashion of the times, Buyo’s writing is also an examination of the effects of free enterprise unchained in an era of peace.

He exhaustively sets down the frivolity and conspicuous wealth that become available in large cities such as Edo, and the underbelly that always attends such excess: crime, usury and the singular pursuit of profit.

“When did the concept of interest appear in the world?” he asks. “It seems that it was the doing of those engaged in the marketing of goods. How contemptible!”

A good deal of this book’s charm stems from its author’s fallibility. Buyo is prone to blanket statements, is often corrected by the book’s editors on his facts (especially those concerning the provinces) and not infrequently misremembers his quotes from the Chinese classics and other sources. Buyo’s penchant for repetition and nostalgia confirm him as the type who walked to school and back uphill both ways in his youth.

As a scholarly text, “Lust, Commerce, and Corruption” is superior. Included in the useful apparatus are notes on currency and measure, and a map of Edo showing warrior and townspeople residential areas and temple grounds. A 30-page introductory essay by the editors, “Buyo Inshi and his Times,” is a lucid, comprehensive beacon that sheds light on the groups Buyo deals with as well as his historical perspective.
- source : Tyler Rothmar / Japan Times 2014 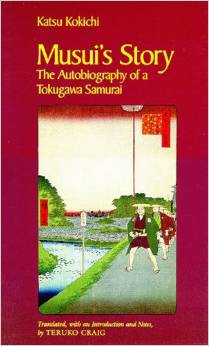 A series of picaresque adventures set against the backdrop of a Japan still closed off from the rest of the world, Musui's Story recounts the escapades of samurai Katsu Kokichi. As it depicts Katsu stealing, brawling, indulging in the pleasure quarters, and getting the better of authorities, it also provides a refreshing perspective on Japanese society, customs, economy, and human relationships.
From childhood Katsu
was given to mischief. He ran away from home, once at thirteen, making his way as a beggar on the great trunk road between Edo and Kyoto, and again at twenty, posing as the emissary of a feudal lord. He eventually married and had children but never obtained official preferment and was forced to supplement a meager stipend by dealing in swords, selling protection to shopkeepers, and generally using his muscle and wits. Katsu's descriptions of loyalty and kindness, greed and deception, vanity and superstition offer an intimate view of daily life in nineteenth-century Japan unavailable in standard history books.
Musui's Story
will delight not only students of Japan's past but also general readers who will be entranced by Katsu's candor and boundless zest for life.
- source : amazon com -