nori 糊 natural glue (rice starch) was used when changing paper for the sliding doors, for example. It was also used for robes.
Another name is  himenori 姫糊 "princess nori glue".

. kan nori 寒糊 (かんのり) glue made in the cold .
from the root of the Tororo aoi plant.
kigo for winter


- quote
himenori 姫糊 "princess glue"
Paste is the basis of color and must be mixed on the block with the pigment by use of a brush. The process must be done only just before printing, and not previously. This gives substantial body to the pigment and thus secures its uniform application to the block. It should be noted that this procedure is not for the purpose of making the pigment adhere to the paper. If too much paste is used, the paper will stick to the block and cannot be removed.

The paste, which is called himenori, is made of refined rice and water in the proportion of 50 grams (1.78 ounces) of rice to 340cc (.72 pint) of water. The method of preparing the paste is as follows:

The refined rice is placed in 50 cc of water and allowed to stand for two or three days.
When the rice has fully absorbed the water, the mixture is placed in a suribachi (earthenware mortar) and pounded until it is of uniform consistency.
The mixture is then placed in a pan with the remaining 290cc of water and set on a heater. During the heating process the mixture must be stirred constantly with a spatular stick.
As the mixture comes to a boil it begins to turn translucent. It must be removed from the heater at the moment when it becomes about seventy percent translucent. This is the most important part of the procedure.
Stirring must be continued vigorously until the mixture becomes tepid and returns to a more or less opaque condition.
Next, particles of foreign matter and grains of rice that have escaped the pounding process must be removed by squeezing the mixture through a cotton-cloth bag.

The consistency of the paste should be the same as that of cooked oatmeal. But for the purpose of pasting a hanshita, this must be as dense as that of cold cream, the water proportion being reduced by one-third at preparation. If it were boiled, it would soon lose the requisite consistency later on. It should be sufficiently fluid to be poured into another container, but thick enough so a drop smaller than thumb-tip size clings to the end of a stick.
- source : woodblock.com/encyclopedia


Starch to be used after washing a kimono was sold in units of 1 mon.
The outfit of a vendor was almost like a tofu vendor with two tubs on a pole over the shoulders.
They uses two spatula made from bamboo to scoop the starch out of their buckets into a pot offered by the customer.

It was often sold by old ladies. On rainy days people did not to any washing, so the old ladies (baba ばば、ばあー) did not have to go out.

Here is a sample from workers putting new paper on sliding doors.


look carefully at the lower right to find the detail above  . . . 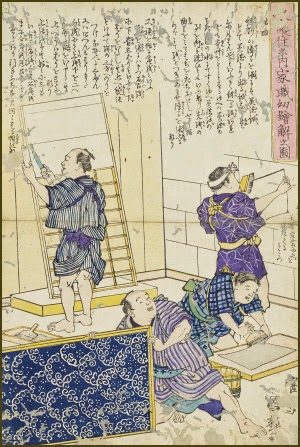 - Great source for checking out the tools of glueing paper on sliding doors
- source : db.ebiki.jp/annotations


- quote
Shita-kiri Suzume (舌切り雀 shita-kiri suzume)
"Tongue-Cut Sparrow"
is a traditional Japanese fable telling of a kind old man, his avaricious wife and an injured sparrow. The story explores the effects of greed, friendship and jealousy on the characters.

The plot
Once upon a time there lived a poor old woodcutter with his wife, who earned their living by cutting wood and fishing. The old man was honest and kind but his wife was arrogant and greedy. One morning, the old man went into the mountains to cut timber and saw an injured sparrow crying out for help. Feeling sorry for the bird, the man takes it back to his home and feeds it some rice to try to help it recover. His wife, being very greedy and rude, is annoyed that he would waste precious food on such a small little thing as a sparrow. The old man, however, continued caring for the bird.

The man had to return to the mountains one day and left the bird in the care of the old woman, who had no intention of feeding it. After her husband left, she went out fishing. While she was gone, the sparrow got into some starch that was left out and eventually ate all of it. The old woman was so angry upon her return that she cut out the bird's tongue and sent it flying back into the mountains from where it came. 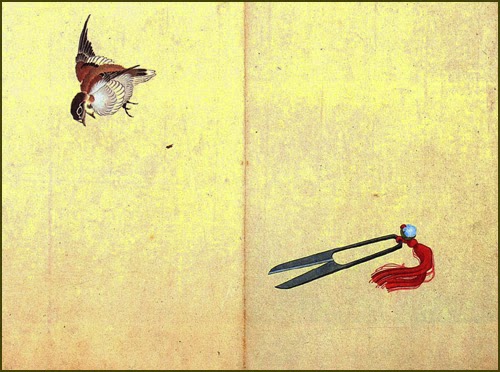 The old man went searching for the bird and, with the help of other sparrows, found his way into a bamboo grove in which the sparrow's inn was located. A multitude of sparrows greeted him and led him to his friend, the little sparrow he saved. The others brought him food and sang and danced for him.

Upon his departure, they presented him with a choice of a large basket or a small basket as a present. Being an older man, he chose the small basket as he thought it would be the least heavy. When he arrived home, he opened the basket and discovered a large amount of treasure inside. The wife, learning of the existence of a larger basket, ran to the sparrow's inn in the hope of getting more treasure for herself. She chose the larger basket but was warned not to open it before getting home.

Such was her greed that the wife could not resist opening the basket before she returned to the house. To her surprise, the box was full of deadly snakes and other monsters. They startled her so much that she tumbled all the way down the mountain, presumably to her death.

Moral
- The purity of friendship overcomes the evil of greed and jealousy.
- Greed only leads to one's own demise.
- source : wikipedia


- quote
nikawa 膠
A transparent or semi-transparent animal glue, used as a binder *baizai 媒剤, and an adhesive.
Nikawa is durable and elastic, although it loses flexibility with age. It is made from the skins, bones, tendons and intestines of animals or fish skins and bones, which are boiled in water to extract gelatin. Excess water is evaporated away, and after cooling leaves a jelly-like glue. Nikawa does not dissolve in cold water, but can be dissolved when heated.

A solution of a few percent concentration is used in Japanese painting *nihonga 日本画 to adhere the pigments *ganryou 顔料 and fix them to the picture surface. Nikawa is mixed with alum to make *dousa 礬水 for sizing paper and is used as a primary coat in oil painting, abura-e 油絵.

Nikawa has many uses as an adhesive for wood, paper and cloth, and acts as binder for substances such as the white pigment *gofun 胡粉, and *tonoko 砥の粉, applied to statues before painting.
- source : JAANUS