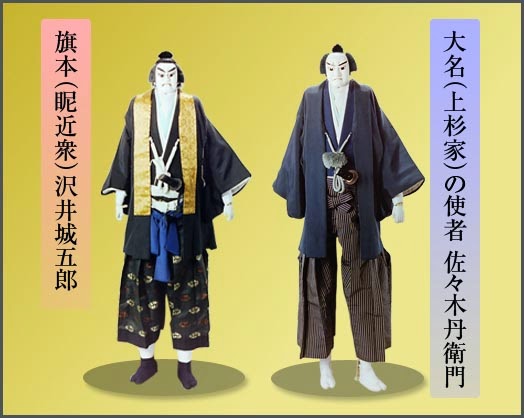 - quote
A hatamoto (旗本, "under the banners") was a samurai in the direct service of the Tokugawa shogunate of feudal Japan. While all three of the shogunates in Japanese history had official retainers, in the two preceding ones, they were referred to as gokenin 御家人.
However, in the Edo period, hatamoto were the upper vassals of the Tokugawa house, and the gokenin were the lower vassals. There was no precise difference between the two in terms of income level, but hatamoto had the right to an audience with the shogun, where gokenin did not. The word hatamoto literally means "at the base of the flag" and is often translated as "bannerman".
Another term for the Edo-era hatamoto was jikisan hatamoto (直参旗本), sometimes rendered as "direct Shogunal hatamoto", which serves to illustrate the difference between them and the preceding generation of hatamoto who served various lords.

- History -
The term hatamoto originated in the Sengoku period. The term was used for the direct retainers of a lord; as the name suggests, the men who were grouped "at the base of the flag". Many lords had hatamoto; however, when the Tokugawa clan achieved ascendancy in 1600, its hatamoto system was institutionalized, and it is to that system which we mainly refer today when using the term.

In the eyes of the Tokugawa Shogunate, hatamoto were retainers who had served the family from its days in Mikawa onward. However, the ranks of the hatamoto also included people from outside the hereditary ranks of the Tokugawa house. Retainer families of formerly defeated provincial strongmen like Takeda, Hōjō, or Imagawa were included, as were branch families of feudal lords. Also included were heirs to lords whose domains were confiscated (for example, Asano Daigaku, the brother of Asano Naganori), local power figures in remote parts of the country who never became daimyo; and the families of Kamakura Period and Muromachi Period Shugo (Governors) : some of these include the Akamatsu, Besshō (branch of the Akamatsu), Hōjō, Hatakeyama, Kanamori, Imagawa, Mogami, Nagai, Oda, Ōtomo, Takeda, Toki, Takenaka (branch of the Toki), Takigawa, Tsutsui, and Yamana families.
The act of becoming a hatamoto was known as bakushin toritate (幕臣取立て).

The hatamoto remained retainers of the main Tokugawa clan after the fall of the Shogunate in 1868, and followed the Tokugawa to their new domain of Shizuoka. The hatamoto lost their status along with all other samurai in Japan following the abolition of the domains in 1871.

- Ranks and roles -
The line between hatamoto and gokenin, especially amongst hatamoto of lower rank, was not rigid, and the title of hatamoto had more to do with rank rather than income rating. In the context of an army, it could be compared to the position of an officer.
Throughout the Edo period, hatamoto held the distinction that if they possessed high enough rank, they had the right to personal audience with the shogun (these hatamoto were known as ome-mie ijō 目見以上).
All hatamoto can be divided into two categories, the kuramaitori 蔵米取, who took their incomes straight from Tokugawa granaries, and the jikatatori 地方取, who held land scattered throughout Japan.
Another level of status distinction amongst the hatamoto was the class of kōtai-yoriai 交代寄合, men who were heads of hatamoto families and held provincial fiefs, and had alternate attendance (sankin kotai 参勤交代) duties like the daimyo. However, as kōtai-yoriai were men of very high income in terms of the spectrum of hatamoto stipends, not all jikatatori hatamoto had the duty of alternate attendance. The dividing line between the upper hatamoto and the fudai daimyo — the domain lords who were also vassals of the Tokugawa house — was 10,000 koku.

Some hatamoto could be granted an increase in income and thus promoted to the rank of fudai daimyo 譜代大名. However, this did not happen frequently. One example of such a promotion is the case of the Hayashi family of Kaibuchi (later known as Jozai han), who began as jikatatori hatamoto but who became fudai daimyo and went on to play a prominent role in the Boshin War, despite their domain's relatively small size of 10,000 koku.

The term for a hatamoto with income in the neighborhood of 8,000 koku or greater was taishin hatamoto 大身旗本 ("greater hatamoto").

The hatamoto who lived in Edo resided in their own private districts and oversaw their own police work and security. Men from hatamoto ranks could serve in a variety of roles in the Tokugawa administration, including service in the police force as yoriki inspectors, city magistrates, magistrates or tax collectors of direct Tokugawa house land, members of the wakadoshiyori council 若年寄, and many other positions.

The expression "eighty thousand hatamoto" (旗本八万旗 hatamoto hachimanhata) was in popular use to denote their numbers, but a 1722 study put their numbers at about 5,000. Adding the gokenin brought the number up to about 17,000.
- source : wikipedia 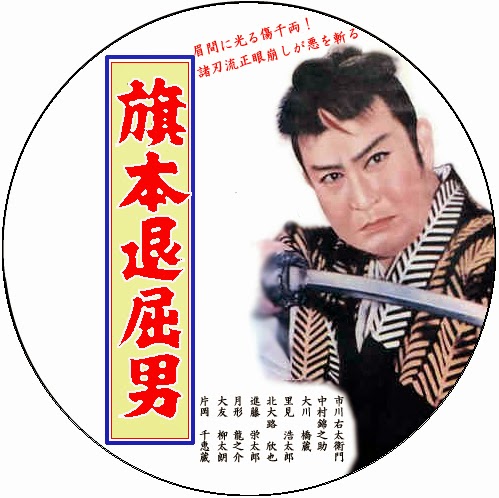 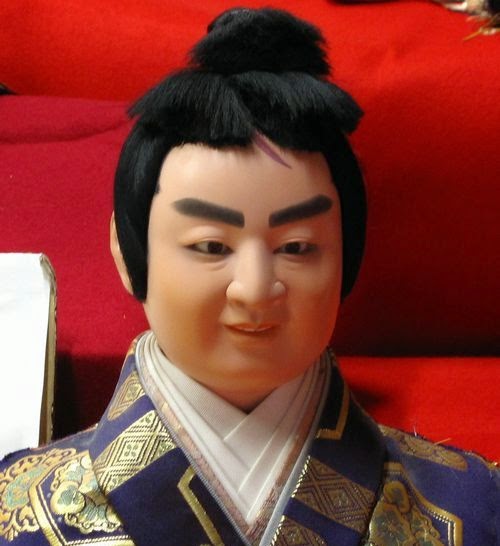 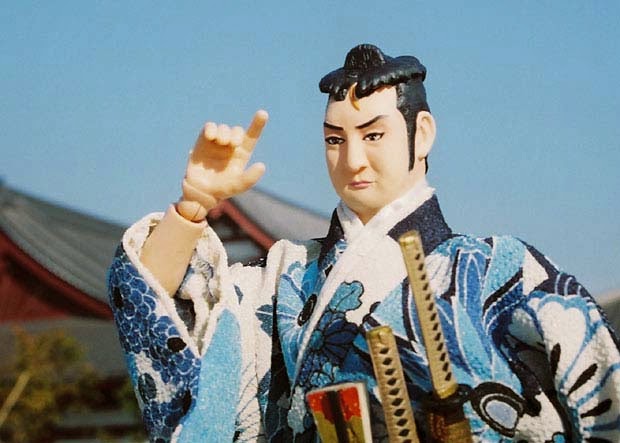 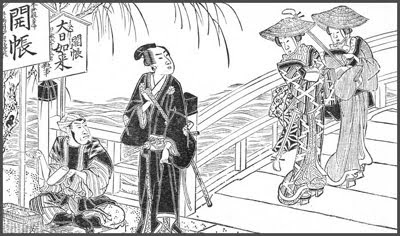 GENZABURÔ'S MEETING WITH THE ETA MAIDEN