shibui, in its original meaning, is the adstringent taste of food.

- quote
Calling kakishibu a “dye” is a bit of a misnomer. Made from the fermented juice of unripe astringent persimmons, the color comes from the tannin molecules linking together and forming a coating. More than a coloring agent, kakishibu also has strengthening, antibacterial and waterproofing properties. Kakishibu was used in China and Korea, but reached its ultimate utilization in Japan. It was used as a wood preservative, waterproofer, insect repellent, folk medicine, and on washi (Japanese paper), fans, parasols, clothing and in sake production.
. Persimmon (kaki) and kigo . 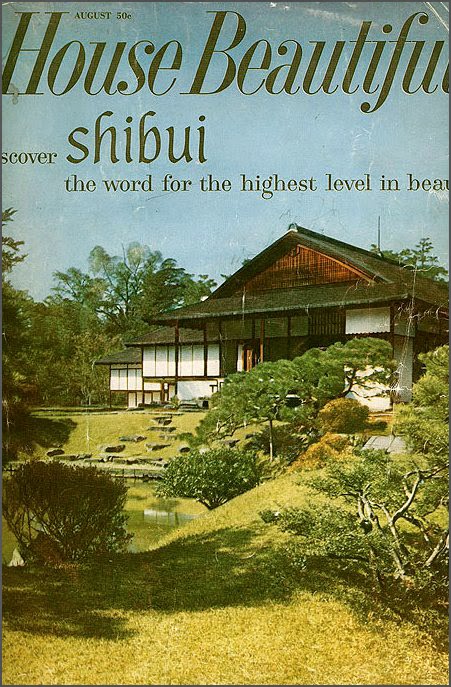 August 1960 House Beautiful -" Discover Shibui:
The Word for the Highest Level in Beauty. "

“One of the most influential issues ever by a design magazine” is how the August 1960 issue by House Beautiful magazine titled, “ Discover Shibui: The Word for the Highest Level in Beauty” is described in the archives of the Smithsonian Institution (The Elizabeth Gordon Papers. Freer Gallery of Art and Arthur M. Sackler Gallery Archives). The August “Shibui” issue was followed by the September 1960 issue
“How to be Shibui with American Things”.


These two landmark magazine issues introduced the American public to Japanese aesthetic of shibui (or shibusa). Elizabeth Gordon, House Beautiful editor (1941-1964) wrote in the August issue “Shibui describes a profound, unassuming, quiet feeling. It is unobtrusive and unostentatious. It may have hidden attainments, but they are not paraded or displayed. The form is simple and must have been arrived at with an economy of means.
Shibui is never complicated or contrived.”


EAST MEETS WEST
While Western art had certainly been influenced by the decorative arts of Japan before these issues, nothing in English had been written on the Japanese aesthetic of shibui before Elizabeth Gordon introduced shibui to the American public. “These issues were published just as I was finishing high school and preparing to go into design so they were incredibly timely in my development,” Says Bob Garcia (Therien & Co.). “Fortunately I went to The Rudolph Schaeffer School of Design soon thereafter and given the Asian bent to the school's curriculum. The colors and compositions of Shibui were engrained in my own aesthetic.” 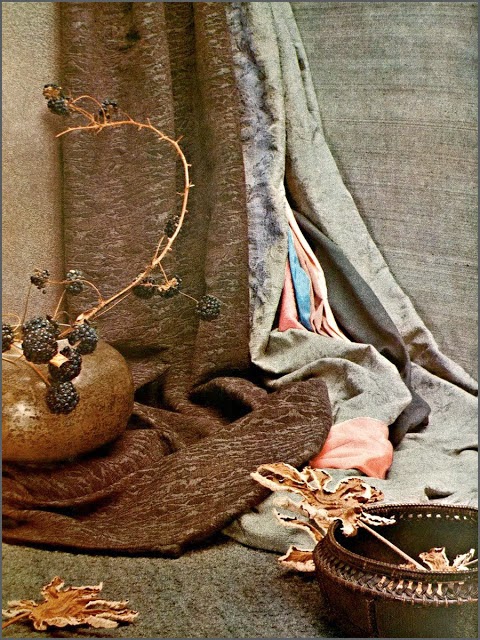 Shibui beauty, as in the beauty of Tea Ceremony,
is beauty that makes an artist of the viewer."
Elizabeth Gordon


- quote
Shibui (渋い) (adjective), shibumi (渋み) (noun), or shibusa (渋さ) (noun)
are Japanese words which refer to a particular aesthetic of simple, subtle, and unobtrusive beauty. Like other Japanese aesthetic terms, such as iki and wabi-sabi, shibui can apply to a wide variety of subjects, not just art or fashion.

- - - - - Defining shibui or shibusa
Shibusa is an enriched, subdued appearance or experience of intrinsically fine quality with economy of form, line, and effort, producing a timeless tranquility. Shibusa includes the following essential qualities:

(1) Shibui objects appear to be simple overall but they include subtle details, such as textures, that balance simplicity with complexity.
(2) This balance of simplicity and complexity ensures that one does not tire of a shibui object but constantly finds new meanings and enriched beauty that cause its aesthetic value to grow over the years.
(3) Shibusa is not to be confused with wabi or sabi. Though many wabi or sabi objects are shibui, not all shibui objects are wabi or sabi. Wabi or sabi objects can be more severe and sometimes exaggerate intentional imperfections to such an extent that they can appear to be artificial. Shibui objects are not necessarily imperfect or asymmetrical, though they can include these qualities.
(4) Shibusa walks a fine line between contrasting aesthetic concepts such as elegant and rough or spontaneous and restrained. 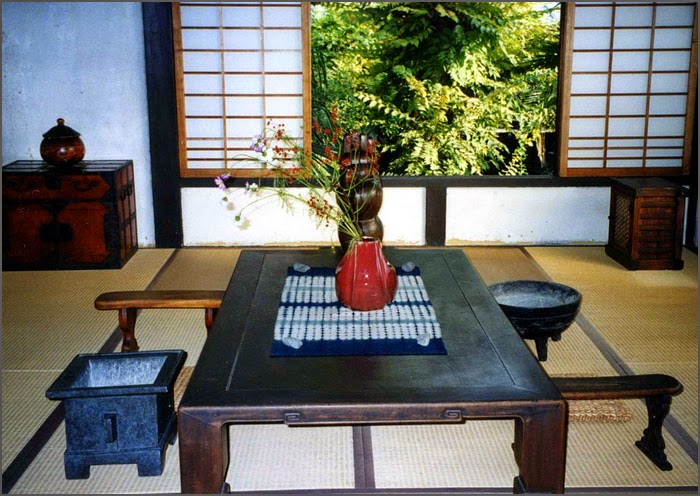 The colors of shibusa are "muddy" colors. For example, in interior decorating and painting, gray is added to primary colors to create a silvery effect that ties the different colors together into a coordinated scheme. Depending upon how much gray is added, shibui colors range from pastels to dark. Occasionally, a patch of brighter color is added as a highlight.

The seven elements of shibusa are simplicity, implicity, modesty, silence, naturalness, everydayness, and imperfection.
The aristocratic simplicity of shibusa is the refined expression of the essence of elements in an aesthetic experience producing quietude. Spare elegance is evident in darkling serenity with a hint of sparkle. Implicity allows depth of feeling to be visible through a spare surface design thereby manifesting the invisible core that offers new meanings with each encounter. The person of shibusa modesty exalts excellence via a thoroughness of taking time to learn, watch, read, understand, develop, think, and merges into understatement and silence concerning oneself. Shibusa's sanctuary of silence, non-dualism—the resolution of opposites, is intuition coupled with beauty and faith as foundations for phases of truth revealing the worship and reverence for life. Naturalness conveys spontaneity in growth, unforced.

The healthy roughness of texture and irregular asymmetrical form maintain shibusa freedom wherein the center lies beyond all particular things in infinity. Everydayness raises ordinary things to a place of honor refined of all artificial and unnecessary properties thus imparting spiritual joy for today is more auspicious than tomorrow. Shibusa everydayness provides a framework, a tradition for an artist's oeuvre to be a unit not a process. Hiroshi Mizuo argues that the best examples of shibusa are found in the crafts, which are ordinary objects made to be used; also, since they are mass-produced, they tend to be more spontaneous and healthy than many of the fine arts. Imperfection in shibusa Soetsu Yanagi in The Unknown Craftsman refers to as "beauty with inner implications". It is not a beauty displayed before the viewer by its creator; creation here means making a piece that will lead the viewer to draw beauty out of it for oneself. Shibui beauty, as in the beauty of Tea Ceremony, is beauty that makes an artist of the viewer."

In James A. Michener's book Iberia the adjective 'shibui' is referenced as follows: "The Japanese have a word which summarizes all the best in Japanese life, yet it has no explanation and cannot be translated. It is the word shibui, and the best approximation to its meaning is 'acerbic good taste.'"

The author Trevanian (the nom de plume of Dr. Rodney William Whitaker) wrote in his 1979 best-selling novel Shibumi, “Shibumi has to do with great refinement underlying commonplace appearances.” In the business fable The Shibumi Strategy, the author, Matthew May, wrote that shibumi "has come to denote those things that exhibit in paradox and all at once the very best of everything and nothing: Elegant simplicity. Effortless effectiveness. Understated excellence. Beautiful imperfection."

- - - - - History of the term
Originating in the Muromachi period (1336–1392) as shibushi, the term originally referred to a sour or astringent taste, such as that of an unripe persimmon. Shibui maintains that literal meaning still, and remains the antonym of amai (甘い), meaning 'sweet'. 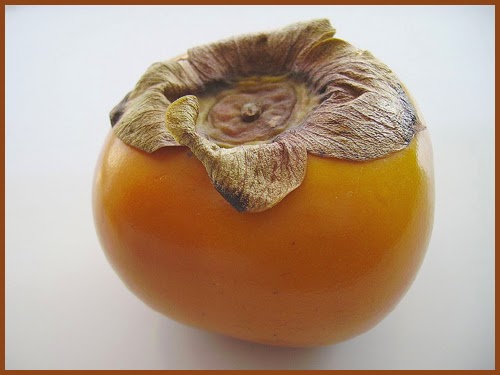 An almost ripe Shibui, the fruit of Diospyros kaki

However, by the beginnings of the Edo period (1615-1868), the term had gradually begun to refer to a pleasing aesthetic. The people of Edo expressed their tastes in using this term to refer to anything from song to fashion to craftsmanship that was beautiful by being understated, or by being precisely what it was meant to be and not elaborated upon. Essentially, the aesthetic ideal of shibumi seeks out events, performances, people or objects that are beautiful in a direct and simple way, without being flashy.

Expert singers, actors, potters, and artists of all other sorts were often said to be shibui; their expertise caused them to do things beautifully without making them excessive or gaudy.

The concept of shibusa was introduced to the West in August and September, 1960, in publications of the American magazine House Beautiful.

Today, sometimes baseball players are even said to be shibui when they contribute to the overall success of the team without doing anything to make themselves stand out individually. The apparent effortlessness displayed by athletes such as tennis player Roger Federer and hockey great Wayne Gretzky are examples of shibumi in personal performance.

With a long list of additional reading
- - - More in the WIKIPEDIA !


- quote
Everett Brown's lifestyle is a reflection of his philosophy on life.
American photojournalist combines traditional with modern in daily life

Brown uses the term "shibu-modern" to explain the theme in his lifestyle and his design for his country inn.

Several examples of shibu-modern can be seen at Jiji no Ie. One example is the suikinkutsu — an underground ceramic urn in the inn's Japanese garden that makes a beautiful sound when water drips into it.
Brown said he wanted to re-create the aesthetic of an Edo Period tea house garden. He asked Yosuke Yamaguchi, an award-winning gardener from Nagasaki, to design the garden, to build the suikinkutsu as an aesthetic feature in the inn's garden.

Wabi and Sabi: The Aesthetics of Solitude

- quote
Haiku and the Perception of the Unique
Richard Gilbert, Japan
Egalitarian Typologies Versus the Perception of the Unique,
by James Hillman
Hillman interests me because he poses a deeper polarity or dichotomy, regarding excellence: egalitarian typology versus the perception of the unique. It may be that any critic (“person of taste”), in advancing a rationale for excellence, unavoidably presents a schema as part and parcel of a logical, formal argument for quality.
For haiku, one can speak of yugen, shibumi, karumi, wabi-sabi, etc. These terms, taken together, form an egalitarian typology. Critics will say that this or that haiku possesses more or less of one and another.


Can haiku be distinguished from other short forms of poetry?
..... beginning with the first requirement: shibumi.

English haiku must not be pale imitations of Japanese haiku, or mere ... advantages of sabi, shibumi and similar aesthetic qualities cannot but improve the climate ...

The most common terms for aesthetics and design will be introduced here.
.
http://edoflourishing.blogspot.jp/2014/10/aesthetics-bigaku.html