- quote
Galápagos syndrome (ガラパゴス化 Garapagosu-ka) is a term of Japanese origin, which refers to an isolated development branch of a globally available product. The term is a reference to similar phenomena Charles Darwin encountered in the Galápagos Islands, with its isolated flora and fauna, which were key observations in the development of Evolutionary Theory.

The term was originally coined to refer to Japanese 3G mobile phones, which had developed a large number of specialized features and dominated Japan, but were unsuccessful abroad.[2][3] The term arose as part of the dialog about Japan's position as an island nation, and related anxiety about being isolated from the world at large. The term has since been used for similar phenomena in other markets. A derived term is
Gara-phone (ガラケー gara-kei),
blending with "mobile phone" (携帯 keitai), used to refer to Japanese feature phones, by contrast with newer smart phones.


"Japan’s cellphones are like the endemic species that Darwin encountered on the Galápagos Islands — fantastically evolved and divergent from their mainland cousins — explains Takeshi Natsuno, who teaches at Tokyo’s Keio University."

"Japanese phones suffer from 'Galapagos Syndrome' — are too complex to survive abroad.

The United States' outdated usage of magnetic stripe for credit cards can also be considered a form of the Galapagos Syndrome as everywhere else has moved onto using EMV smart cards. "In the Americas, the more mature, out-dated magstripe cards are the dominant if not exclusive technology for swiping a payment. In Europe and Asia -- virtually everywhere else, they use a smart chip technology which is a little, gold square on the front of every debit and credit card which you insert, not swipe. This is also known as "EMV" (Europay, MasterCard, Visa)."

"It has been claimed that the indigenous American automotive industry has suffered from the Galapagos Syndrome – its products have evolved separately from the rest of the world."

"The Galapagosization of Japan continues. According to a survey released today, a shocking two-thirds of the country’s white-collar workers said they didn’t want to work abroad - ever."

"The same question has occurred to me recently upon hearing, with greater and greater frequency, the "explanation" of Japanese culture being garapagosuka ("galapagosized")."
- source : wikipedia 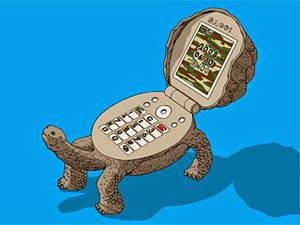