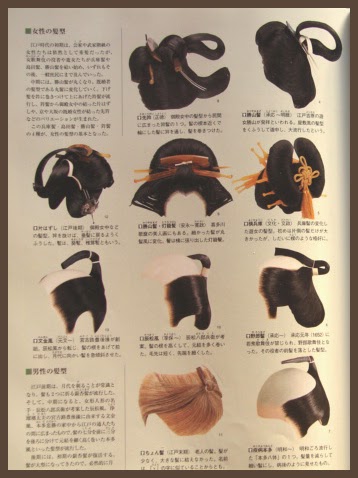 katsurashi, katsura shi 鬘師 wig maker
In the Edo period, wigs were not usually worn by normal people, but only by actors.
The wigs had to be carefully adjusted to the face of an actor in a certain role he was going to play. 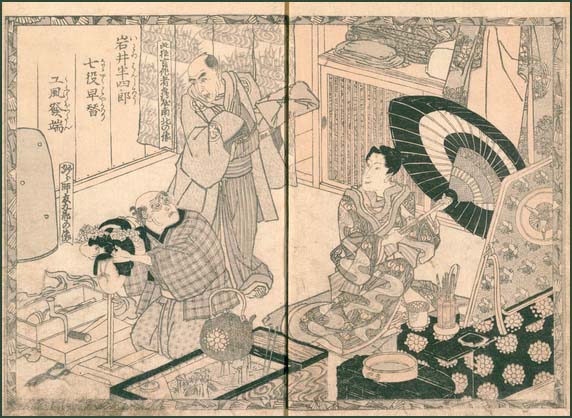 - quote -
A wig for an actor or for a puppet. 役者や人形のための鬘。
Wigs used in Kabuki 歌舞伎
Japanese wig-making techniques date back to the 17th century Kabuki theater when men, who traditionally shaved the top of their heads, had to play the roles of women, Thus a wig-making industry grew up to serve the onnagata Kabuki actors (men playing the roles of women).
The wig is based on a "daigane" [台金 base-metal], a thin copper plate which is pounded to fit the shape of actor's head, onto which the hair weave (蓑 mino) is attached. It is said that this technique was invented in the Enpo Era (1673-1681). In the late Edo Period, "habutae" [羽二重 a kind of thin silk cloth] was attached to the thin copper plate to make the hairline appear more natural. This made the hair appear as though it were actually growing from the head.
They are basically constituted of 4 parts:
bin 鬢 [the sections of hair on both sides of the face],
tabo 髷 [hair on the back of the head],
mage 髱 [central section of hair done up in various shapes] - and
maegami 前髪 [forelock].
The shape of each of these parts can be changed with use of accessories called kakemono 掛け物 ("things attached") or sashimono さし物 ("things stuck through").
The roles and their characteristics are expressed by variations and combinations of each of these parts. For the same reason as for costumes, the degrees of exaggeration and stylization in Jidaimono are more extreme than for Sewamono.
The variety of wigs for Tachiyaku (male roles) is said to be about 1,000 kinds, but for Onnagata (female roles) there are only about 400, because the roles and their characteristics set for Tachiyaku are more complex.
- source : glopad.org/jparc -


kamioki, kami oki 髪置 (かみおき) binding up the hair
..... kushi oki 櫛置（くしおき） using a comb
November 15, the full moon night of the Asian lunar calendar
Boys and girls at age three are combed tn this fashion for the first time. This is a celebration of growing up for the whole family.
A wig is made from white hemp or cotton and put on the head of the children, to show they will grow to ripe old age. After visiting the family deity (ujigami) there is a feast with all the relatives.
Boys are next celebrated at age 5, when they put on their first hakama trousers.
Shichigosan . Seven-Five-Three Festival

chonmage ちょんまげ/ 丁髷 topknot
"samurai buns"
traditional hairstyle for samurai in the feudal era
It was originally a method of using hair to hold a samurai helmet steady atop the head in battle, and became a status symbol among Japanese society.
A traditional Edo-era chonmage featured a shaved pate. The remaining hair, which was long, was oiled and tied into a small queue which was folded onto the top of the head in the characteristic topknot.
During the Edo period, men of the hinin outcast class were required to keep their hair cut short without topknots.
Westerners associated the chonmage with backwardness and a lack of civilisation and this was one reason why Japanese cut their hair.
- source : more in the wikipedia


The law sanpatsu dattoo 散髪脱刀 was enacted in 1871
In 1876, the haitoo-rei廃刀令 forbade non-uniformed personnel from wearing swords.
- quote -
(1871) Japan Abolishes the Samurai Topknot
On August 9, 1871 (Meiji 4), the Japanese government issued the danpatsurei (断髪令, Cropped Hair Edict), encouraging samurai to cut their distinctive chonmage topknot. It created a minor photography boom when samurai rushed to photo studios to get their photo taken before their chonmage was cut off. As a result of the edict, Western hair styles, called zangiri (散切り), became increasingly popular. This became a powerful symbol of the dramatic change overtaking Japanese society.

True reformation of the samurai system started when on January 10, 1873 (Meiji 6), the samurai’s right to be the only armed force was abolished and replaced by a modern, western-style, conscripted army. The new system was called chouheirei (徴兵令, Conscription Ordinance) and was the beginning of the end of the samurai system in Japan.

Samurai now became shizoku (士族). They retained some of their salaries, paid for by the government, but these were so low that many samurai were forced to find new employment.
- source : meijishowa.com/calendar -

Most of the female kamiyui went from home to home in the morning to cater to their regular customers. Some later on opened their own shop.
If a woman worked as a kamiyui, she made enough money to earn her own and feed her husband and family. 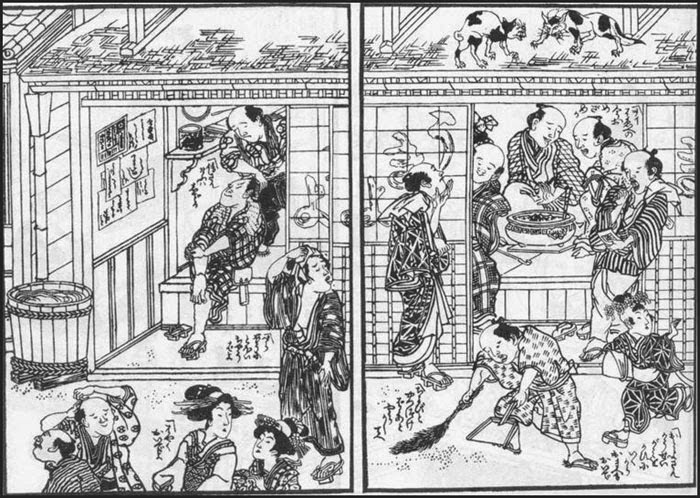 - quote -
The Independent Working Woman as Deviant in Tokugawa Japan,
1600-1867
snip
According to historian Nishioka Masako, the first female hairdressers were spotted in Osaka sometime between the Meiwa (1764-71) and Anei (1772-80) eras. While the early hairdressers catered mostly to women of the pleasure quarters, it was not long before they began attracting women of the artisan and merchant classes. Yasukuni has pointed out that popular hairstyles were not only fashionable but also convenient, particularly for the townswomen who could maintain the same set for up to one or two months. By the Kaei (1848-53) era, there were more than 1,400 female hairdressers in Edo alone.

The emergence of the hairdressers exemplifies how far female labor had developed by the mid-Tokugawa period. In writer Tamenaga Shunsui's Shunshoku umegoyomi (1832), one of the female characters is a young hairdresser who is described as a tomboy, otherwise known as "anego" (female boss) among the town youths. While there is no reason to assume that all hairdressers took on a masculine character, it is likely that many were either self-sufficient or less dependent on the ie. Given the phrase, "kamiyui no teishu" (the hairdresser's husband) that referred to a man who lived off a woman's income, historian Seki Tamiko has suggested that the hairdressers' earnings were often on a par with men's.

The newly invented stereotypes that address the hairdressers' potential self-sufficiency must be considered within the context of a rapidly expanding commercial economy that supported the employment of independent wage-earning women and the society's continued fascination with yet denigration of female labor. As historian Susan Hanley has pointed out, during the course of the Tokugawa period the townspeople spent large proportions of their incomes on status goods and gifts to maintain and enhance existing social networks. These acts were serious challenges to the rigid social distinctions of the period and frowned upon by the Tokugawa government. In an episode in businessman Mitsui Takafusa's (1684-1748) Chonin kokenroku (ca. 1730), a merchant of Edo is severely punished when his spendthrift wife is mistaken for a lady by none other than the Shogun himself.

As historian Mikiso Hane has explained, some merchant households lost their fortunes by incurring the wrath of the ruling authorities. Hence the women who catered to the extravagant needs of merchant wives and daughters faced heavy consequences when they violated the official banning of hairdressers in a series of moral reforms in the late eighteenth century. Not only were the hairdressers fined, but their husbands and parents were also held accountable. Nevertheless, the hairdressers were continually brought back by popular demand.
- - - - - more  - source : Shiho Imai 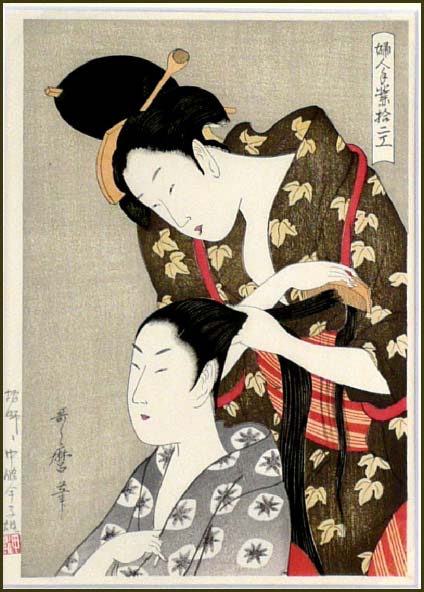 The first shop of this kind was opened by the hairstylist of Tokugawa Ieyasu、北小路藤七郎
Kitakoji Toshichiro. He got the permission to travel freely in Japan and finally settled in 赤羽 Akabane in Edo. In the time of the fourth generation, 幸次郎, he was allowed to open a shop in each suburb of Edo 一町一軒の髪結床. 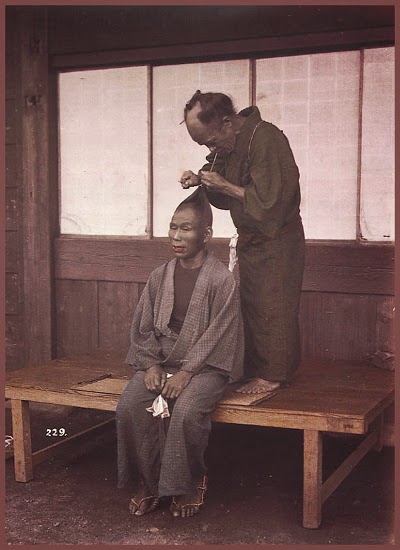 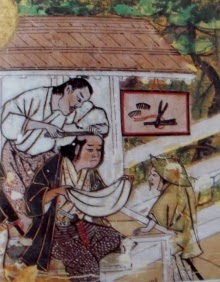 dedoko 出床 hairdresser setting up a mobile shop at a busy road or bridge. Some also worked there with the order of keeping an eye on the people crossing the bridge (a sort of spy for the local police station).

bindarai 鬢盥 hairdresser working in the home of a client 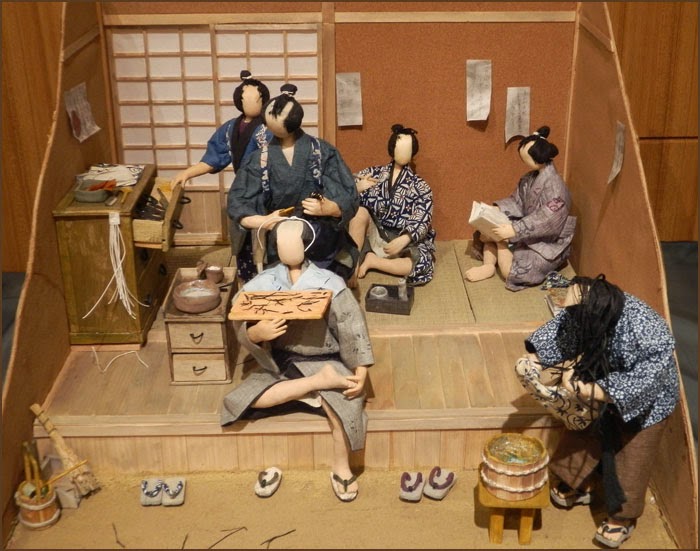 「かみいどこ」 kami idoko in the local dialect of Edo.
Exhibit at the Fukagawa Edo Museum 深川江戸資料館

- summary
Shinza has enticed Chushichi, the Shirakoya clerk, to aid him in kidnapping Okuma, daughter of the Shirakoya's owner. Shinza sent back Yatagoro Genshichi, the gang leader who came to negotiate with him, but the landlord Chobe who comes to see Shinza is more than Shinza can cope with, and Shinza decides to release Okuma in exchange for 30 ryo in cash. But Chobe talks Shinza down and cheats him out of 15 ryo and half of a large bonito. Later, Genshichi ambushes Shinza and kills him to avenge the humiliation he suffered because of Shinza.
Usually this work is performed from the 'Shirakoya misesaki' scene in which Shinza persuades Chushichi to join his plot, to the 'Fukagawa emmadobashi' scene in which Genshichi takes his revenge on Shinza.

- Read the full text of the play here
- source : kabuki21.com/kamiyui_shinza 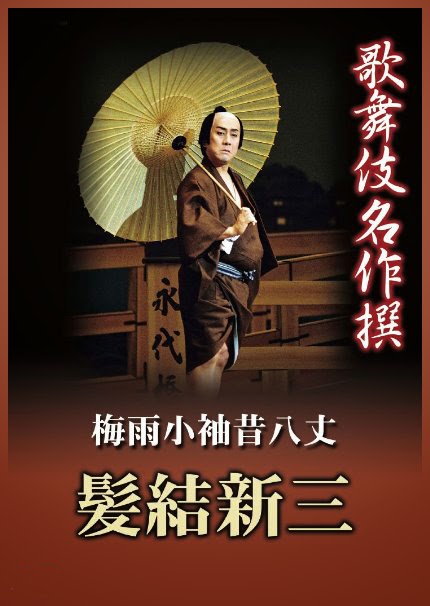 - Costume
Kamiyui Shinza is one of the dramatis personae of a Sewamono which realistically describes the lives of common people of the Edo period, so his costume is not exaggerated compared to the common people's clothing in that period. The characteristics of each role are expressed by the colors and patterns of their kimono. Shinza's costume is blue as shown in the photograph. This blue color shows that he is a stylish character, a fashionable edokko.
A tasuki (cord used to tuck up sleeves) is made by connecting pieces of mottoi (paper cords for tying up hair) used to tie mage (topknot or chignon), showing a customs of the kamiyui (hairdressers) of the period.

- Props
Kamiyui Shinza holds props reproduced so that they are identical to the tools used by ordinary hairdressers in the Edo period, and realistically acts out the situation of dressing hair. The actor playing this role learns in advance how to handle the tools and how to do hairdressing from the artisan called Tokoyama who dresses wigs, so that onstage the actor can look like a real hairdresser.
- source : Japan Arts Council, 2007

the hairdos
of companions all white...
blossom shade

rainstorm--
outside the hairdresser's
a potted pine 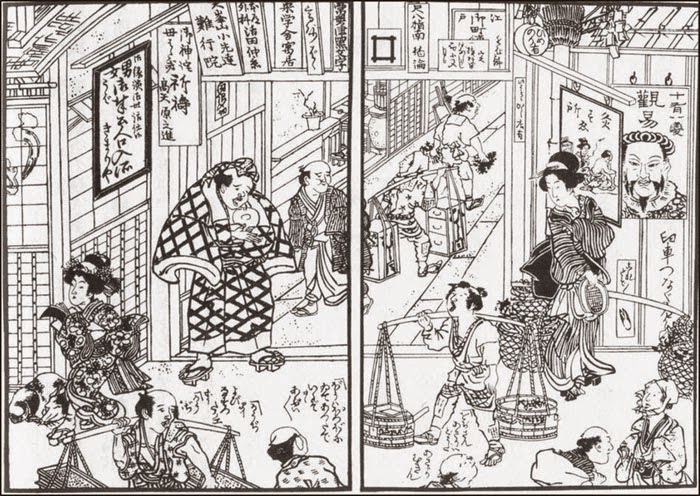 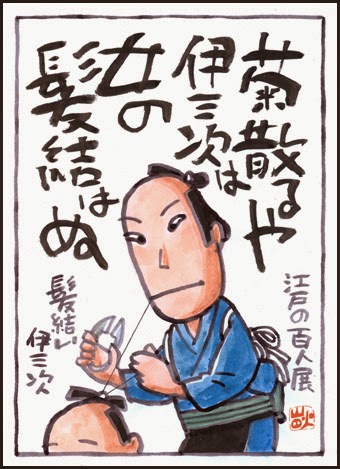 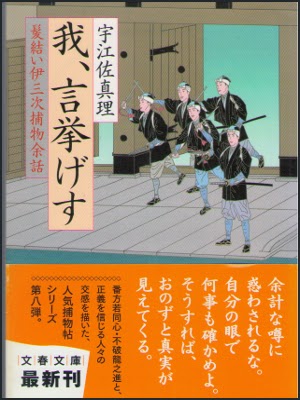 Do You Have the Patience to Wear an Ancient Japanese Hairstyle?
.
The hairstyle is called the mage. There were different styles of mage for different periods in Japanese history. The process of putting it all together like this, this kind of ceremony, is called the mageyui.
.
http://www.visiontimes.com/2015/04/21/do-you-have-the-patience-to-wear-an-ancient-japanese-hairstyle.html
.