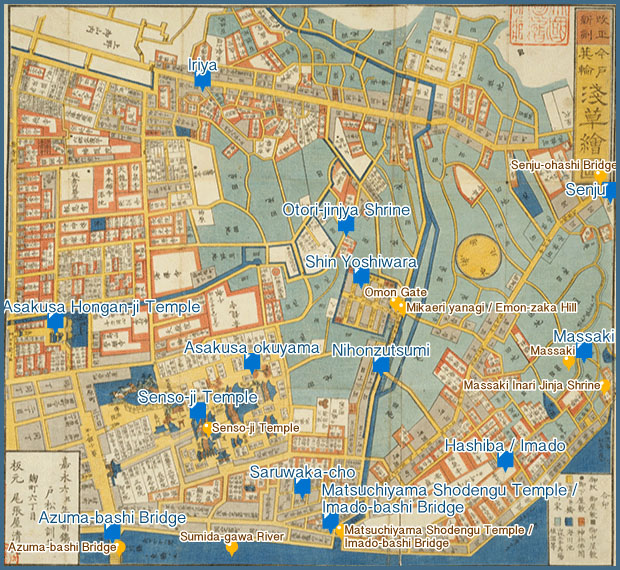 - quote -
The Origin of Asakusa
During the Jomon era, Asakusa was under the sea. They say it came over the sea in the Yayoi era.
By the way, what is the place name"Asakusa" based on? According to the historical materials of Tokyo-fu, "the name Asakusa came from little grass, meaning that there was little grass in the area in Musashino region where weeds overrun. Thus the sandy banks of river Sumidagawa were easily ready for construction works and dwellings.
This is the common theory.
When we are requested to tell some story about Asakusa, we will tell about "Sensouji temple".
- source : asakusaimahan.co.jp- 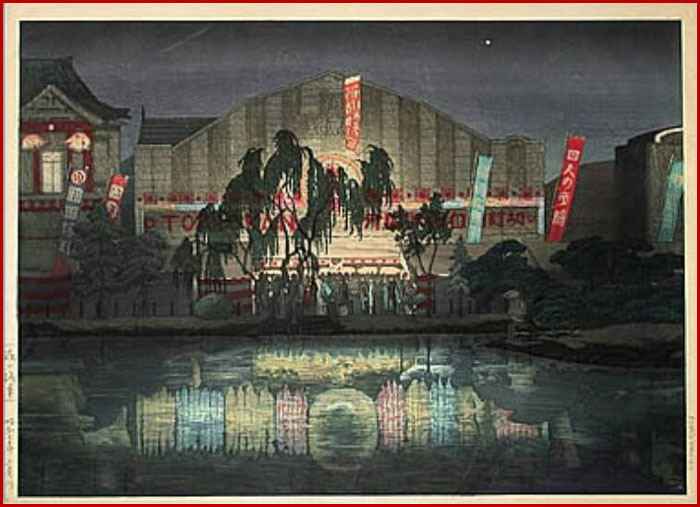 However, it should be noted that an 浅草区 Asakusa-ku Asakusa Ward existed from 1878-1947. At that time, the places called Asakusa increased. After 1947, the number of Asakusa place names decreased dramatically until what is today considered is Asakusa is defined by little more than a train station here or there and a few vestigial postal addresses. But some 江戸っ子 Edokko 3rd generation Tōkyōites might consider some nearby neighborhoods as Asakusa, when technically they are not. 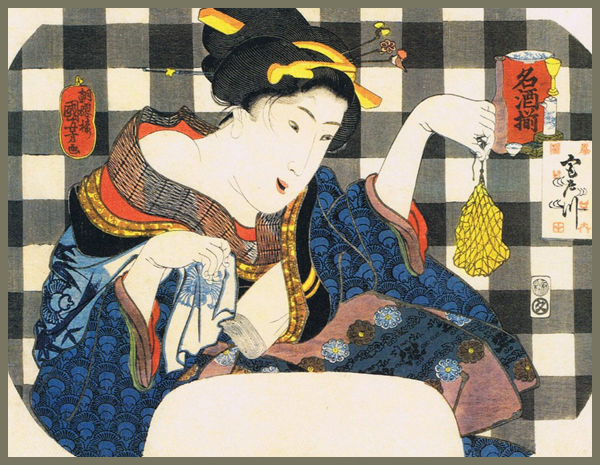 The Story So Far
The beginnings are purely mythical. In 628, some brothers were fishing in the 宮戸側川 Miyato-gawa Miyato River[iii] and – surprise, surprise – they caught a statue of 観音 Kan’non the goddess of mercy in their fishing nets. The brothers enshrined the statue in their home and kept it for private worship. It’s interesting to note, that this year, 628, just happened to be the same year as the death of 推古天皇 Suiko Tennō Empress Suiko, whose reign had seen great encouragement of Buddhism. This time in general is seen as a tipping point for the broader acceptance of Buddhism in Japan.
In 645,
having been shared with the local villagers from time to time, the statue was made into a 秘仏 hibutsu, image of Buddha hidden from the public. Then a proper temple was established.
Both dates, 628 and 645, are considered the founding of Asakusa-dera or Sensō-ji (we don’t know which pronunciation was prevalent at the time). Also both dates would still earn it the title of the oldest temple in Edo-Tōkyō. It seems that by 942, the first 雷門 kaminari mon thunder gate had been established, although in a different location.

From here on out we will see a dichotomy between
Asakusa (the area) and Sensō-ji (the temple).

Remember, all of this is preserved in the legends and records of the temple itself. There doesn’t seem to be any corroborating evidence elsewhere. In fact, the area isn’t recorded by non-temple sources until around 1266. At that time it is mentioned in a Kamakura Period text called the 吾妻鏡 Azuma Kagami Mirror of the West.
The common understanding is
that the temple was founded on a small plateau on the west bank of the Sumida River. A 門前町 monzenchō / monzenmachi formed around the temple precinct and continued growing from that time. Because of the town’s location on the Sumida River, which was good for trading, the town not only prospered, but attracted the best craftsmen of the region. Temple records indicate thriving trade between the Kamakura area and this region.
Legend has it
that when 源頼朝 Minamoto no Yoritomo Minamoto Yoritomo chose Kamakura as his capital (thus establishing the first of the 3 great shōgunates), he couldn’t find sufficiently skilled craftsmen in the area. On one occasion, he camped along the Sumida River near Asakusa. He visited the temple, as one does, and was so impressed with the builders that he hired them to come to Kamakura to build 鶴岡八幡宮 Tsuru-ga-oka Hachiman-gū which is still one of Kamakura’s grandest shrines. It’s said that trade between Asakusa and Kamakura was so intense that by the time the shōgunate collapsed, many of Kamakura’s merchants and artisans had relocated to Asakusa.
Temple and shrine building wasn’t a big deal in the Sengoku Period, but carpentry and building skills were definitely in demand. It’s not hard to imagine some of the craftsmen of Asakusa being hired to help the Toshima, the Hōjō, the Edo Clan, or even crazy ol’ Ōta Dōkan in their building efforts.
Prior to the Edo Period,
Asakusa was just a prosperous temple town on the river. But with the coming of the Tokugawa, everything changed. Urban sprawl from nearby by Chiyoda/Edo soon brought the area under the influence of the shōgun’s capital at such an early stage that Edo Period people and modern Tōkyōites generally just considered the area to have been part of Edo since time immemorial – even though for most of its existence, Asakusa was a separate town from the hamlet of Edo.
The temple
came under a particularly special patronage by the shōgun family because the head priest of Zōjō-ji had claimed that Asakusa Kan’non was the strongest deity in the Kantō area and that she had served Minamoto Yoritomo well. Tokugawa Ieyasu believed this deity helped him achieve total victory at the Battle of Sekigahara and as such it received great honors from the shōgunal family. While the temple was endowed by Edo’s most elite, its main mission was catering to the common people – a brilliant PR move on both Ieyasu and the temple’s parts[xii]. The temple has always been important to the commoners of Edo-Tōkyō.
In 1657,
after the Meireki Fire burned Edo down to the fucking ground, the licensed pleasure quarters called Yoshiwara was relocated from Nihonbashi to the area north of Asakusa because this was just a northern suburb at the time. Remember, we’re only 57 years into the Edo Period, son. Anyways, this transformed the area from just a pilgrimage spot to a proper tourist destination. And not just any old tourist destination; a tourist destination with a happy ending – if you know what I mean.
As lively as the area had become, its fame was only getting greater. In the 1840’s, after some crack downs on unlicensed kabuki theaters[xiv], the three prominent licensed kabuki theaters were forced to relocated to the Asakusa area. The area’s reputation as a center of nightlife was already secured, but adding popular theater to the area guaranteed this legacy for several more generations.
In the Meiji Era,
kabuki received imperial patronage and the underground kabuki theaters were as legit as the formerly licensed ones. Soon cinemas opened up in the area which showcased a foreign art form that the Japanese immediately became infatuated with. The area was now a bigger destination than ever; home to one of Tōkyō’s grandest temples and a vibrant theater district. Nearby Yoshiwara was still going off like crazy. Until WWII, Asakusa and Yoshiwara defined nightlife Japanese style. 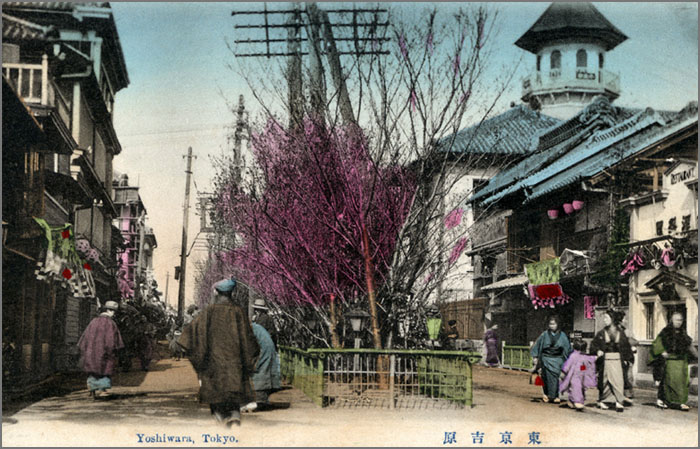 It should be noted that in the Meiji Period, the temple lands were made into a park, naturally called 浅草公園 Asakusa Kōen Asakusa Park. The area was not unlike modern 上野公園 Ueno Kōen Ueno Park. The centerpiece of the park was Sensō-ji, but the real attractions were the theaters, cinemas, izakaya, and pleasure quarter overflow.
- snip -
What’s the Etymology?
The etymology of Asakusa has been researched by people since the Kamakura Period[xviii] and people have been coming across the same roadblock every time.
浅草寺 Asakusa-dera - 浅草寺 Sensō-ji
Same Kanji, Different Readings 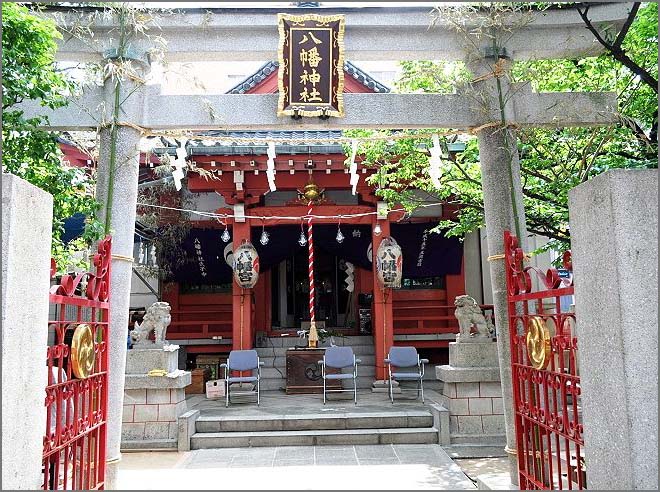 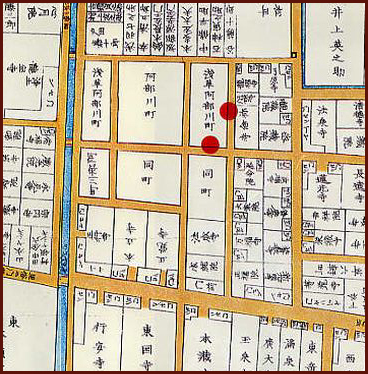 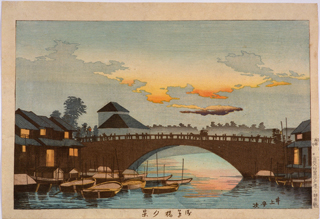 - quote -
Asakusabashi 浅草橋
The district is traditionally known for many wholesale stores, and recently known for its large stores selling traditional Japanese dolls (although some of the largest doll stores, such as Kyugetsu and Shugetsu, are located across Edo-dori avenue, thus belonging to the Yanagibashi neighborhood), or packaging materials, and it hosts a very large concentration of beads stores.
The Ryuhoku campus of the Lycée Franco-Japonais de Tokyo (Franco-Japanese High School of Tokyo) is also located in this neighborhood. 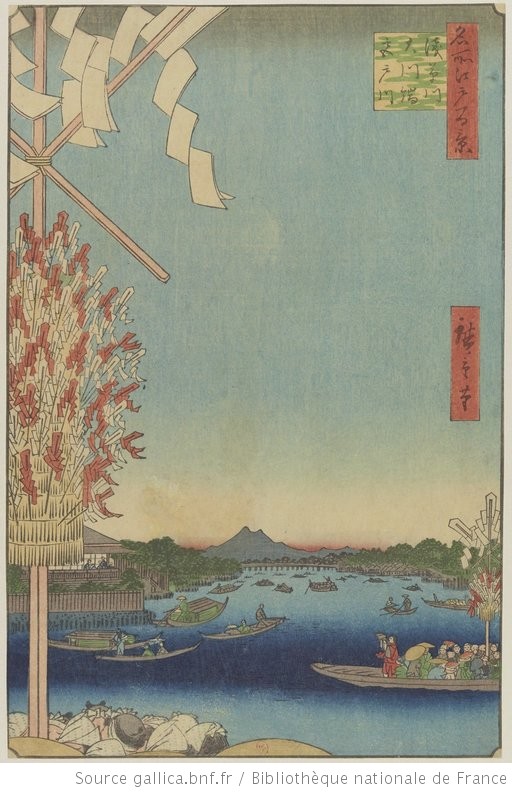 One famous resident of Hanakawado was
. Banzuin Chobei 幡随院長兵衛 Chobei of Bandzuin . - (1622–1657)
who led of a band of machi-yakko street toughs to fight against injustice.

The temple was founded in 1598. During the Great Meireki fire in 1657 a statue of a seated Amida Buddha was erected to pray for the souls of the many dead people. The statue sits on a lotus podestal with engravings of the names of the people who contributed.
- source : asakusanioideyo.com -

Another famous statue of the temple :
- - - - - . kutsubaki Jizo son 沓履地蔵尊 Jizo Bosatsu wearing shoes .
In Hanakawado there lived many craftsmen making straw sandals and other kinds of shoes (hakimono 履物). Even now there are more than 70 dealers in this district.

At the confluence of the rivers Sumidagawa and Kandagawa. It is named after
村田平右衛門守勝 Murata Heiemon Morikatsu.
When Tokugawa Ieyasu came to Edo in 1590, Heiemon came with him from Hamamatsu, Shizuoka. He also followed Ieyasu on the visits to temple Senso-Ji 浅草寺 and was then ordered to built a town here. In 1616 he had finished his own machiya 町家 "town house" and the district was named after him.
Heiemon helped with the official planning of the town of Edo and was involved in the building of bridges too. 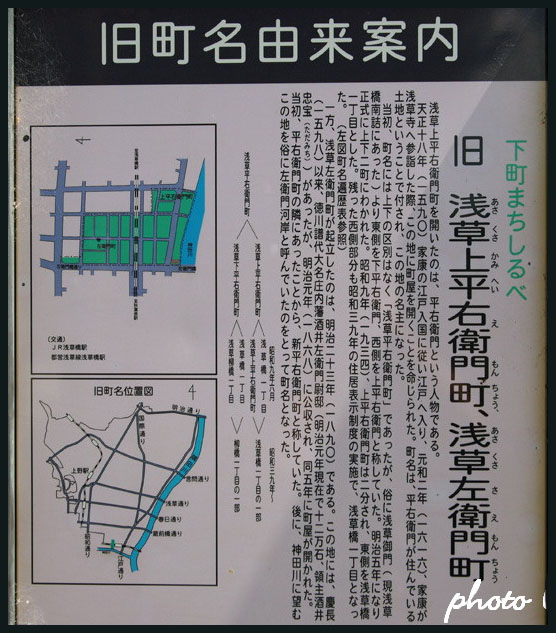 Others say it is a pun with right 右 and left 左 of the road from the Asakusa gate toward the river.
- source : city.taito.lg.jp - 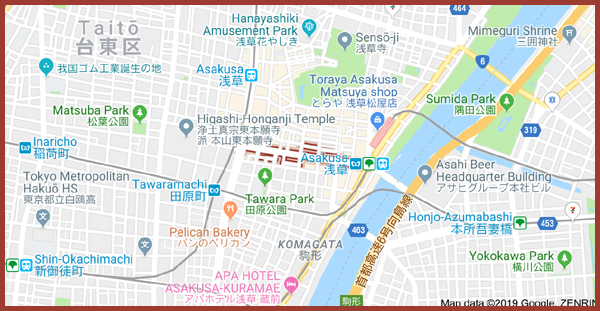 
. Kuramae 蔵前 "before the store houses" .

Asakusa Tame 浅草溜（あさくさため）/ （あさくさだめ） Asakusadame
A place behind the Asakusa temple where ill and dying prisoners had to find their last rest.
It was abolished in 1699.

This district of former fields (tahara 田原 ) belonged to the compound of Senso-Ji. The fields were turned to human settlements from first to third 丁目 Chome.
It was also called kamisukichoo 紙漉町 Paper Making District / kamisukichoo かみすき丁 / 紙すき町.
The paper made here is the Asakusagami 浅草紙 Paper from Asakusa.
..... the very first Paper factory in Edo tha was here and prosperd from the late 17th Century through the 19th Century.
- source : tokyotaito.blog.shinobi.jp -

The third Chome of Tawaracho ended in front of the Kaminarimon gate of the temple, so this street was very lively with all kinds of entertainment business.
Asakusa hirokooji 浅草広小路 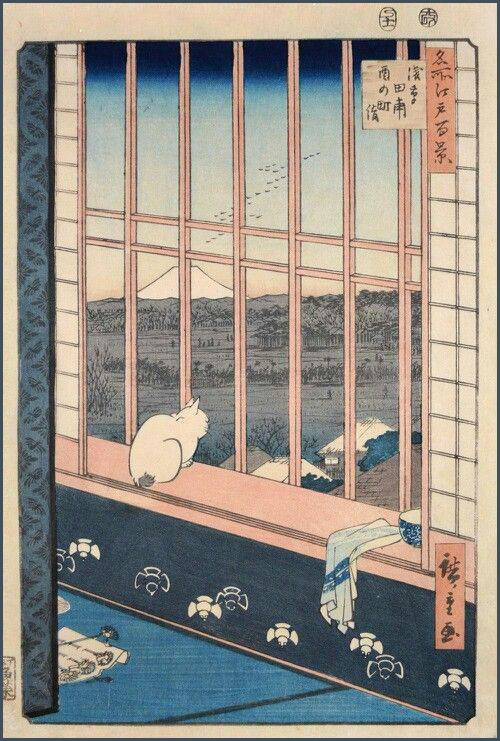