佃 refers to a cultivated rice field, but the area is better known for its special food preparation

. tsukudani つくだに (佃煮) simmering in sweetened soy sauce .
It has been used since olden times as a kind of food preserve. It started with the fishermen from Tsukuda island, who prepared the leftovers of fish in this way. They came originally from Settsu in the Osaka area and Shogun Tokugawa Ieyasu settled them at Tsukuda island.
The village head of Tsukuda village 佃村 in Settsu was 森孫右衛門 Mori Magoemon, who came with 32 of his fellow fishermen to Edo. The fishermen had helped Ieyasu make escape from the Osaka region after Oda Nobunaga killed himself in the Honnō-Jji incident.
Tsukudani 佃煮 soon became a speciality of Edo and Tokyo. 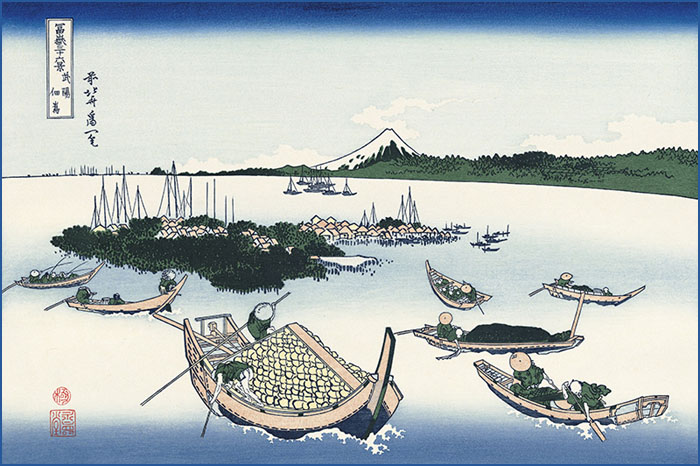 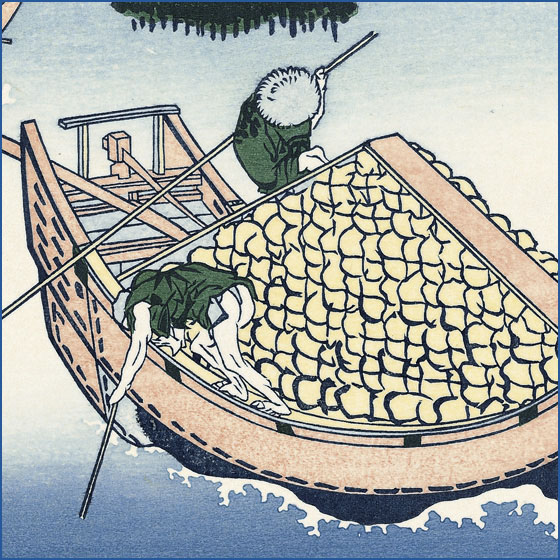 - quote
Tsukuda-Shima
The boat slides smoothly up onto the sand beach of a small but bustling island. Tsukuda island is a low, sandy islet at the mouth of the Sumida river, which runs through the heart of Edo. Apart from a few patches of trees and small vegetable gardens, the entire island is occupied by a thriving village of fishermen and boat pilots, who make their living from the commerce of Edo Bay.

This island is located in an ideal spot for people who make their living from the sea. It is located right at the mouth of the Sumida river -- the largest waterway in Edo. From here, small boats can easily make their way up the river and through the network of canals to most of the neighborhoods in downtown Edo. To the south, deep water channels extend out into Edo bay. The docks of Shiba and Tsukiji are nearby, so large boats can anchor near the island as they wait to be unloaded.

The volume of goods brought into Edo is so large that no single port could possibly handle it. Although the most important cargoes are unloaded at the docks of Shiba, Tsukiji, Minato and Shinagawa, a lot of ships unload their cargoes directly onto small barges and takase-bune as they lie at anchor here, in the lee of Tsukuda island. The smaller boats then carry the goods through Edo's network of canals and waterways to small, riverside wharves, known as kashi.

Because of its location, Tsukuda island is a convenient spot for barges and small boats to stop while waiting for the large ships to start unloading. The beaches are almost always crowded with small boats, and the few chaya (teahouses) on the island are filled with customers chatting, gossipping and sipping their tea as they wait.

In addition to these visitors, the island is home to a thriving village of fishermen. The residents of Tsukuda island came to Edo in the mid-1600s at the request of Shogun Ieyasu. Edo needed to increase the supply of fish to the city, because its population was growing too fast for the existing fishermen to keep up with demand. To convince people to leave their homes in western Japan and move to Edo, the Shogun offered them the special right to fish anywhere in Edo Bay that they want. Entire villages of fishermen accepted the offer, and moved to Edo, establishing large villages in the "Edo-mae" area, including one on Tsukuda island and one on the other side of the Sumida river, in Fukagawa.

Although these fishermen are not allowed to sell their products to the Shogun and his court, they do supply a large share of the fish bought by average citizens. Edo Bay is a rich source of all kinds of seafood, and the fishermen of Tsukuda island have developed many different methods of catching each type. Solitary fish, such as tai (red snapper) are usually caught with a regular fishing line. Other fish can be caught the same way, but it is usually more effective to use nets. 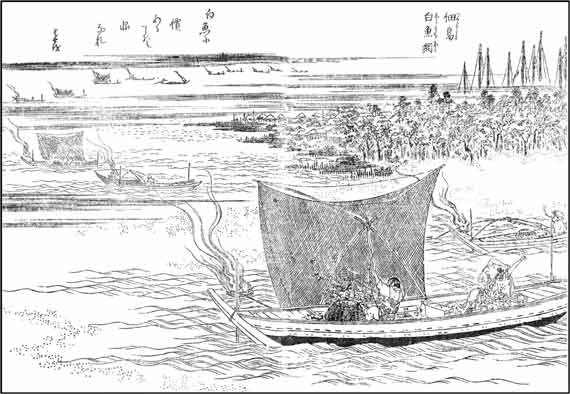 The fishermen have developed a wide variety of different nets to catch different types of fish. Triangular nets on the end of long forked poles are used to catch fish that live in the mud at the bottom o the bay, such as hirame (flatfish) or tako (octopus). Small fish that swim in schools, for example iwashi (sardines), can be caught by just one person using a throwing net. But in order to catch larger fish, like saba (mackerel) and katsuo (bonito), the fishermen have to use huge nets, and work together in a group. Sometimes they use nets that are so big, they have to work in large groups, to haul the nets back in to shore.

Most of the fish can be caught right here in Edo Bay, but some of the largest types, such as maguro (tuna), can only be caught out in the open sea. Once in a while, fishing fleets will leave the bay for several days at a time to chase the huge schools of tuna. They may even attempt to catch a whale. When they are successful, these ocean expeditions can be very profitable. A big load of tuna or whale meat will bring a great price in the fishmarkets of Nihonbashi. However, fishing boats are not as well built as cargo ships; storms can blow up at any time out in the open ocean, so long trips to sea can be very risky. Even here in the Bay, life for most fishermen is difficult and dangerous.

Although fishing is the traditional work of the people from Tsukuda island, many of them have now taken new professions. Because of all the ships that anchor in this area to unload their cargoes, there is always demand for experienced boat pilots, who can transport goods from the large, seagoing vessels to the canal-side markets in different parts of the city. Other people work in the city, transporting people from place to place by boat -- as a sort of a "water taxi driver".
- source : Edomatsu 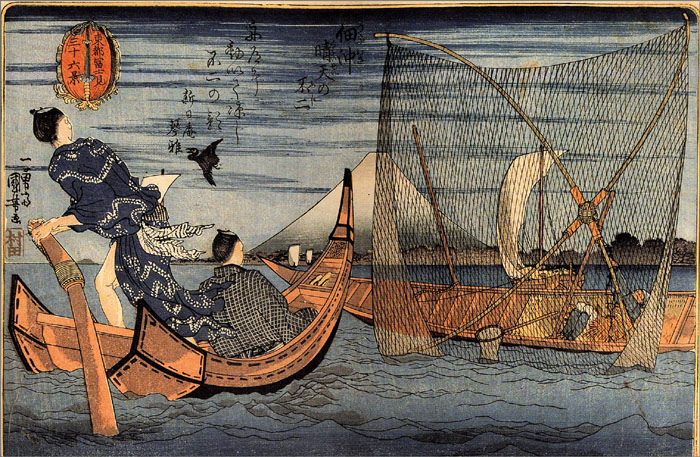 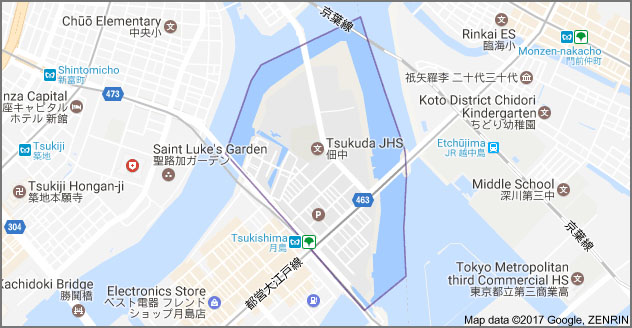 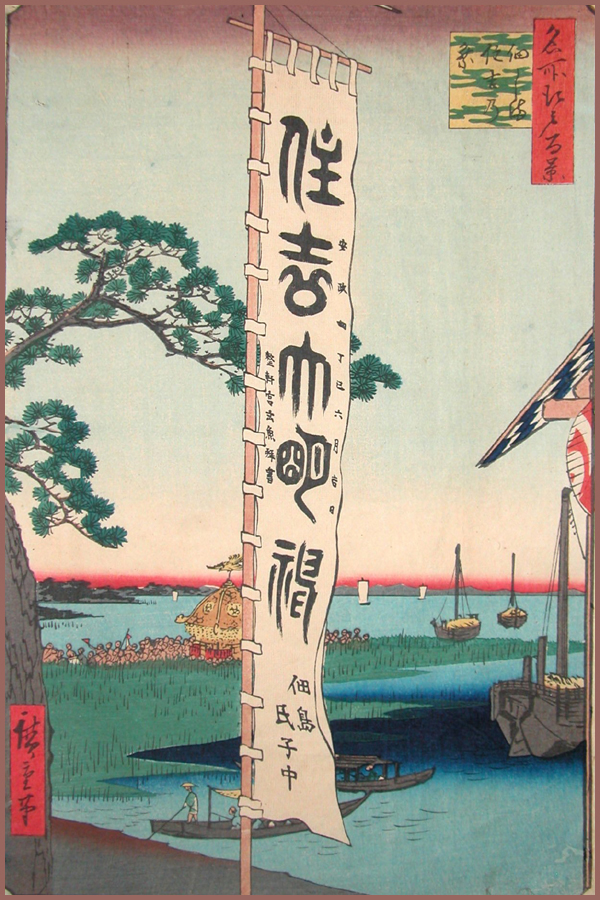 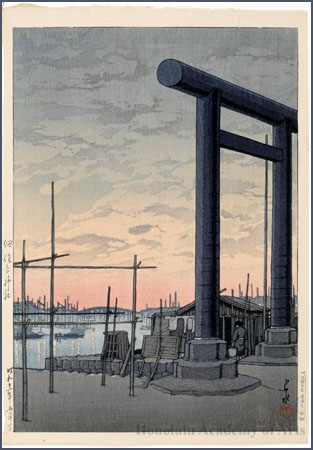 - quote -
Tsukudajima
is on the opposite side of Nishinaka Dori from the Tsukishima Subway Station. Fishermen in Tsukuda Village, Settsu (the current name is Nishiyodogawa-ku, Osaka City) moved to Tsukudajima under orders from Tokugawa Ieyasu in 1644, and developed the area they had been moved to. As nothing remains the same for long in Tokyo, it has been developed rapidly over recent years but older houses that escaped both the 1923 quake and the infamous air raid remain standing, sandwiched in between enormous skyscrapers.
Shumiyoshi Shrine
is related to the Sumiyoshi Shrine in Osaka. When fishermen from Tsukuda Village in Osaka moved here, they divided the enshrined spirit and established this branch with the part transported to the Kanto region.
Local residents, fishermen and those who work on water often visit the shrine to pray for their safety when at sea.
- source : att-japan.net/en/city -