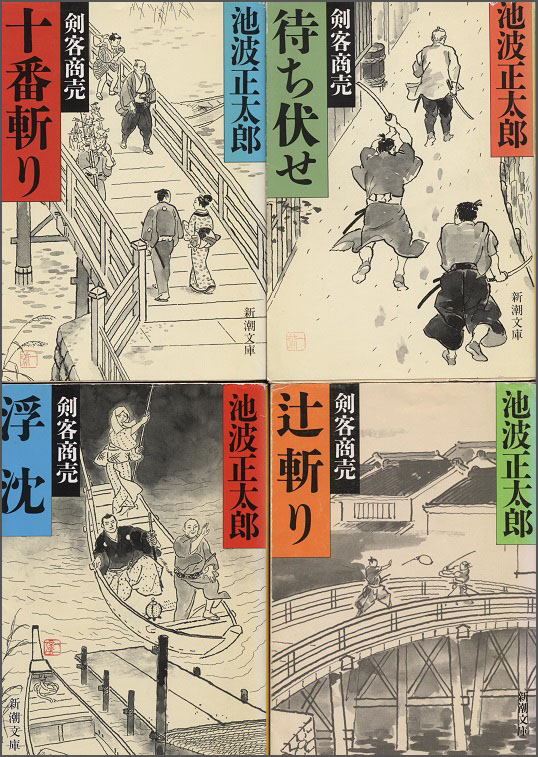 Tsujigiri killings are a well-loved subject of the Samurai Jidaigeki literature and films.

- quote
Tsujigiri (辻斬り or 辻斬 tsuji-giri, literally 'crossroads killing')
is a Japanese term for a practice when a samurai, after receiving a new katana or developing a new fighting style or weapon, tests its effectiveness by attacking a human opponent, usually a random defenseless passer-by, in many cases during nighttime. The practitioners themselves are also referred to as tsujigiri.

In the medieval era, the term referred to traditional duels between bushi, but in the Sengoku period (1467-1600), widespread anarchy caused it to degrade into indiscriminate murder, permitted by the unchecked power of the bushi. Shortly after order was restored, the Edo government prohibited the practice in 1602. Offenders would receive capital punishment. The only known incident where a very large number of people were indiscriminately killed in the Edo period was the 1696 Yoshihara spree killing (吉原百人斬), where a wealthy lord named Yoshihara had a psychotic fit and murdered dozens of prostitutes with a katana. He was treated by authorities as a spree killer and sentenced to death. Later, a kabuki play was made about the incident.
The practice of tsujigiri has been cited in the philosophical debate over moral relativism, notably by Mary Midgley in her 1989 work Can't We Make Moral Judgements?.

Kiri-sute gomen 斬捨御免 or 切捨御免,
literally, "authorization to cut and leave" - the body of the victim
is an old Japanese expression dating back to the feudal era right to strike (right of samurai to kill commoners for perceived affronts). Samurai had the right to strike with sword at anyone of a lower class who compromised their honour.
- - - - - Conditions
Because the right was defined as a part of self defense, the strike had to follow immediately after the offense, meaning that the striker could not attack someone for a past grievance. Also, due to the right being self-defense, it was not permissible to deliver a further coup de grâce. Moreover, the samurai who exercised the right had to prove the correctness of his action in court by producing a witness. Punishment for the incorrect exercise of this right was severe. An offender could be beheaded without being allowed to perform seppuku and have his house abolished, meaning that none of his sons could succeed the title. Due to the seriousness of the punishment, many performed seppuku to pre-empt the verdict. A samurai visiting a different feudal province had to be extremely careful, especially if it was in Edo, the seat of the Shogun. Wrongful executions of commoners from different feudal provinces were seen as an offense against a feudal state. It was thus advisable for samurai visiting different provinces to be accompanied by a servant, so as to provide witness.

- - - - - Right of defense
Because of the somewhat arbitrary nature of this right, anyone who was at the receiving end had the right to defend themselves by wakizashi (short sword). This situation was most common in the case of a higher samurai exercising the right against a lower ranked samurai as samurai would always carry wakizashi.
The expression is still sometimes used in modern-day as "I apologize in advance for this one" for the subtle humor in offering what amounts to an unsympathetic apology.
An instance of Kiri sute gomen is described in the story of the Hōgyū Jizō statue. A boy, whose father was killed by Kirisute gomen, made 100 stone statues in later life, in Kumamoto.
- source : wikipedia


tameshigiri (試し斬り, 試し切り, 試斬, 試切)
is the Japanese art of target test cutting. The kanji literally mean "test cut" (kun'yomi: ためし ぎり tameshi giri). This practice was popularized in the Edo period (17th century) for testing the quality of Japanese swords. It continues to the present day, but has evolved into a martial art which focuses on demonstrating the practitioner's skill with a sword. 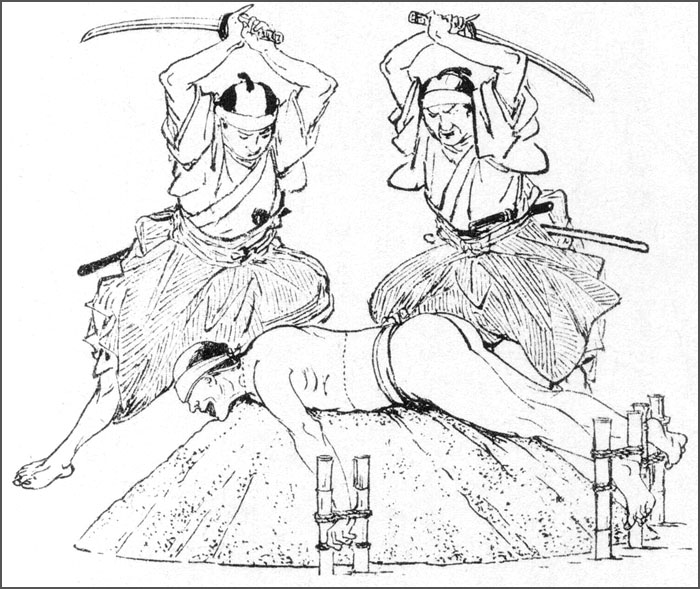 . . . . . there were a wide variety of cuts used on cadavers and occasionally convicted criminals, from tabi-gata (ankle cut) to O-kesa (diagonal cut from shoulder to opposite hip). The names of the types of cuts on cadavers show exactly where on the body the cut was made.
- source : wikipedia

Shinto in History: Ways of the Kami
By John Breen, Mark Teeuwen
On his deathbed Tokugawa Ieyasu had the sword 三池光世 Miike Mitsuyo “tested” on a prisoner, only to declare the sword to be the seat of a kami he himself is going to become after his death.
- reference : books.google.co.jp -

Miike Mitsuyo
The Tokugawa shogunate founder Ieyasu had such an unswerving belief in the spiritual power of this sword that on his death bed he officially transferred his spirit to it, vowing to ensure the eternal prosperity of the shogunate. As a gesture to indicate the Tokugawa family’s position of ultimate control, he ordered the tip of the sword, when displayed, to be pointed toward the region of the Toyotomi clan, which had threatened his hegemony. The sword was the symbol of Ieyasu’s role as protector of the country and became treasured as the main object of worship in the deification of Ieyasu as Tosho Shinkun, the Great God of the Shrines of Eastern Japan.
- source : Yoko Haruhara -

"Trying Out One's New Sword," by Mary Midgley
- - - - - Summary
Midgley argues that not only is moral isolationism – the view that one ought to respect other cultures but not judge them – incorrect, it is logically incoherent. She does so by presenting four self-contained arguments: that judgment is logically antecedent to respect, that outsiders can judge foreign cultures, if on a provisional basis, that moral isolationism leads to a complete inability to make moral judgments of any kind, and that cultures are not, as moral isolationism holds, subject to isolating barriers.
. . . . . First, she argued that
"there is a contradiction between the claim that we cannot understand these rules, and the claim we must respect them." (Midgely) This only means that we, ourselves, can understand people in other cultures. In the following paragraphs, Midgely was able to illustrate some relevant examples to explain the importance of analyzing other culture’s morals in order to form educated judgments about them. She gives an example of ancient Chinese samurai warriors whom before going off to battle would test the sharpness of their swords on innocent strangers. (Midgely)
. . . . . "The Japanese custom tsujigiri involves an owner of a sword and a traveler; the situation is that this owner will have to try out his/her sword to any traveler. This is to check if the blade is really that sharp and that the sword can really kill someone in just a single blow."
source : npapadakis.wordpress.com 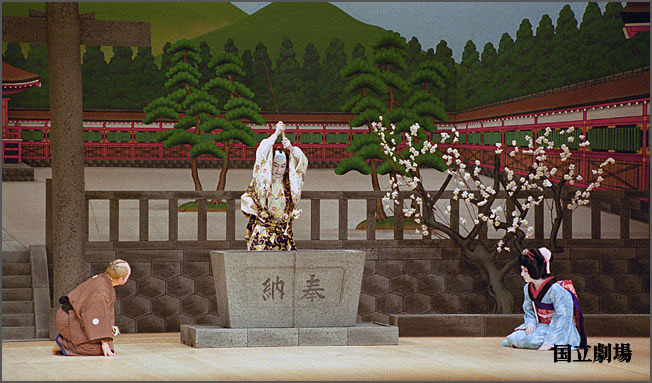 Ôba Saburô and his bombastic villainous brother Matano Gorô, who are both Heike warriors, are at a shrine in Kamakura celebrating their recent victory over the enemy general, Yoritomo, when Kajiwara Heizô, who also fought in the same battle, enters and joins them.

An elderly man and his daughter then appear and approach Ôba. Old Rokurôdayû wishes to sell a precious sword in his possession to help his daughter Kozue, and asks Ôba to buy it. Just as Ôba is about to go ahead, his brother objects and says that before anyone parts with 300 gold pieces he wants the sword examined. Kajiwara, who is known to be an outstanding swordsman, agrees to examine the sword. As he does so, he notices not only its excellence but sees something on the hilt that indicates the sword is a treasure of the enemy Genji, but he keeps that information silent. Kajiwara gives the sword his unqualified approval, and the sale is about to through again when Matano says that if it doesn't cut well it is more useless than a rusty fish knife, and insists that it is tested-by cutting two condemned prisoners in half.

The prison official reports that unfortunately there is only one prisoner currently under the death sentence, so Ôba says that he cannot buy the sword and readies himself to leave. Rokurôdayû, however, is desperate to sell the sword because he is secretly a Genji sympathizer and he needs the money to give to the Genji cause, so he offers himself as the second body, on the understanding they give the money to his daughter after his death. Matano is satisfied and plans to do the slicing himself, but Kajiwara intervenes and says he will test the sword. The condemned man is brought in and lain on top of Rokurôdayû. Kajiwara brings down the sword with precision, but only the criminal is killed. Rokurôdayû is still safely in one piece. Matano is disgusted that the sword has failed its reputation and leaves with Ôba. Kajiwara then reveals that he deliberately gauged the power of his stroke so that Rokurôdayû would not die. He, Kajiwara, recognizes the power and significance of the sword, and will buy it for himself, for he is also secretly a Genji sympathizer. And to prove the sword is in no way defective he brings it down on a stone water trough, cutting it clean in two. All three are delighted with the outcome and leave for Kajiwara's mansion to settle payment.
- reference : kabuki21.com/ishikiri -

In Kanagawa, Yokohama 横浜市, 泉区
To appease the souls of people who got killed in a hold-up (追剥ぎ oihagi) or Tsujigiri people built a 供養塔 stone memorial for prayers.
Later wild cats begun to dance around this stone.

Hōgyū Jizō 放牛地蔵 Hogyu Jizo, Kumamoto
are Japanese stone statues; mostly of Ksitigarbha and other kinds of stone statues made by Buddhist monk Hōgyū (around 1672-1732) between 1722 and 1732 in Kumamoto, Japan. When Hōgyū was about 14, in 1686, his father was killed by a samurai. Later he made stone statues for the repose of the soul of his father.
In January 1686,
a blacksmith called Hichizaemon, a heavy drinker, threw a bamboo blower at his son. It accidentally hit the forehead of a samurai, Ohyano Genzaemon. Despite repeated apologies, Genzaemon immediately killed Hichizaemon with a sword, that being legal at the time by kiri sute gomen. Genzaemon, the son and his sister all wrote witness statements, and the Bugyō did not punish Genzaemon.
Out of grief,
the son entered the Buddhist priesthood for the repose of his father, and offered a prayer with a vow that he would make 100 stone statues. He made 107 stone statues between 1722 and 1732. He died in 1732. The 100th statue was in Ōjō-in Temple in Kumamoto, and it was the biggest statue (186 centimetres (73 in) high) among others standing on the big stone lotus. 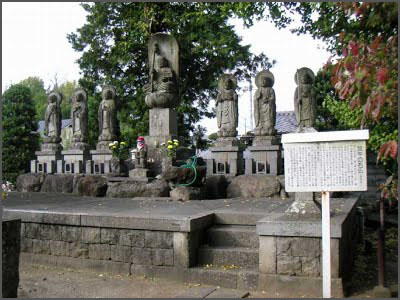 - - - - - maybe
Hideo Nagata studied every statue of Hōgyū and stated that the Hogyu was not the boy whose father was killed. The statues might be connected with the circumstances of the time such as famine.
- source : wikipedia - 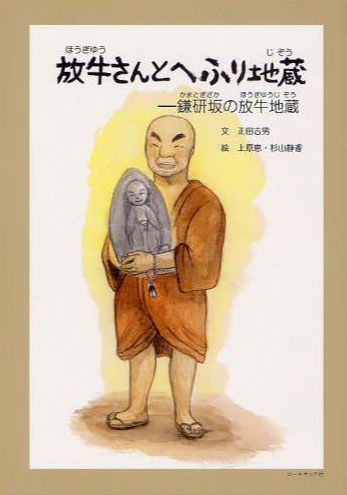 At the part where the main road enters a village, Dososhin deities are enshrined, sacred 注連縄 shimenawa ropes (or sometimes snakes made of straw) and other amulets are hung and 草履 zori (or waraji) straw sandals are offered to the deities in order to prevent evil spirits and monsters (or Kappa in this story) from entering and drive them away.