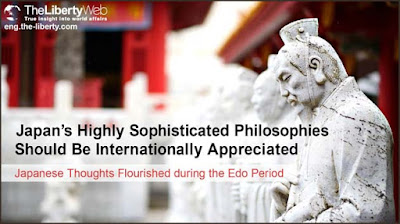 What kind of an image comes to mind when you hear the “Edo period”?
Some people may have an image of a peaceful era when war did not exist for a long time and the performing arts and high culture flourished with the support of the merchants while others may associate it with a dark period of national isolation when people groaned under heavy taxation. Different people have different impressions about the Edo period.

It should be noted in particular that the era saw the appearance of a lot of ideas that were unique to Japan along with the Chu Hsi and Wang Yang-ming schools of Confucianism. Mito-gaku, a style of learning cultivated in the Mito Domain and the study of Japanese classical literature were such examples.

Mr. Shoichi Watanabe, Professor Emeritus of Sophia University, recommends that we view history as if we were looking at a rainbow. There are fine water drops in the sky after it rains. Water drops seems like mist, but when viewed at a certain distance and from a certain direction, you can see a rainbow there. Like the droplets in the air, there are myriad historical facts, and when you look at them from a fixed distance and a certain direction, you can see something like a rainbow there.

There were so many studies during the Edo period, and they were seemingly separate from each other. But if we try to understand the flow of those studies, we will be able to look at them like one big rainbow.


The Power of Thought Started the Meiji Restoration
The Edo period often reminds us of the “Meiji Restoration”, which was the climax of the era. There are many NHK Taiga drama series that deal with the last days of the Tokugawa shogunate. In the spiritual messages series, Master Ryuho Okawa, the founder and CEO of the Happy Science group, has often summoned the spirits of people who played important roles in the Meiji Restoration.

One of those spirits is the spirit of Shonan Yokoi, a Japanese scholar and political reformer. He said, “The Meiji Restoration was a revolution, based not only on Western learning, but also on traditional Confucian thought.”

The spirit of the first Japanese Prime Minister, Hirobumi Ito, said, “It was the power of thought, not military force, that was the driving force for the success of the Meiji Restoration. It was the thought of Shoin Yoshida, more fundamentally, the Wang Yang-ming school of Confucian thought.”

Those spiritual messages revealed that the power of thought achieved the Meiji Restoration, and that it was an almost bloodless revolution.


Japan Saw the Age of the Hundred Schools of Thought
Some spiritual truths that those spiritual messages revealed highlight very interesting facts. (See the figure on the right.)

From this figure, you will find that Confucius and Mencius, the two most significant figures in Confucianism, were both born in the Edo period of Japan.

Confucius was reincarnated as Issai Sato, a famous Confucius scholar during the late Edo period, whose teachings had a deep influence on Shozan Sakuma and many other figures. Mencius was reincarnated as Sorai Ogyu, who insisted on going back to the original teachings of Confucianism. He presented many policy recommendations as an advisor close to the eighth Shogun, Yoshimune Tokugawa.

Confucius and Mencius, who had formed the basis of Confucianism, were reincarnated in the Edo period of Japan to lead the restoration movement of Confucianism. This shows that the Chinese era, called the era of the “Various Masters of the 100 schools”, also emerged in the history of Japan.


A Fusion of Confucianism and the Shinto Religion
Along with the rise of Confucianism in Japan, Shinto gods, including Izanagi-no-mikoto, were reincarnated in Japan as scholars of Japanese classical literature and the Wang Yang-ming school to start the movement for the restoration of Shinto. Japanese classical scholars taught that Japan was a great nation, inspiring many people and ingraining the spirit of Japan in people’s minds. Influenced by their ideas, the patriotic samurais of the Restoration also adopted Western values, and launched an anti-Shogunate movement. Eastern and Western values intertwined to raise the revolution.


Edo Period Thought Was Not Inferior to the Philosophies of the West
It has long been considered that Japan does not have thoughts and ideas that have been internationally recognized. In terms of philosophical thought, the country has been regarded as inferior to the West because it produced philosophers like Locke and Rousseau, who provided a basis for the modern political system and spread the Enlightenment.

However, when viewed from the perspective of spiritual truth, this idea is obviously wrong. In fact, the Edo period was a miraculous era when the ancient Shinto gods descended to Japan one after another and raised eastern philosophy to a higher level.
The Japanese should know more about the dynamic ways of thinking that they had during the Edo period. They were virtues of the East that the Japanese boasted to the world.

From now on, we will introduce the Japanese thought, which flourished during the Edo period, in these columns.