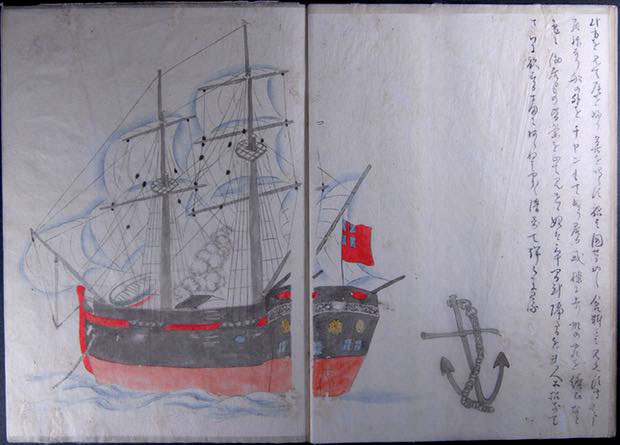 An amateur historian has unearthed compelling evidence that the first Australian maritime foray into Japanese waters was by convict pirates on an audacious escape from Tasmania almost two centuries ago.

Fresh translations of samurai accounts of a “barbarian” ship in 1830 give startling corroboration to a story modern scholars had long dismissed as convict fantasy: that a ragtag crew of criminals encountered a forbidden Japan at the height of its feudal isolation.

The brig Cyprus was hijacked by convicts bound from Hobart to Macquarie Harbour in 1829, in a mutiny that took them all the way to China.

Its maverick skipper was William Swallow, a onetime British cargo ship apprentice and naval conscript in the Napoleonic wars, who in a piracy trial in London the following year told of a samurai cannonball in Japan knocking a telescope from his hand.

Swallow’s fellow mutineers, two of whom were the last men hanged for piracy in Britain, backed his account of having been to Japan.

Western researchers, citing the lack of any Japanese record of the Cyprus, had since ruled the convicts’ story a fabrication.

But that conclusion has been shattered by Nick Russell, a Japan-based English teacher and history buff, in a remarkable piece of sleuthing that has won the endorsement of Australian diplomatic officials and Japanese and Australian archival experts.

Russell, after almost three years of puzzling over an obscure but meticulous record of an early samurai encounter with western interlopers, finally joined the dots with the Cyprus through a speculative Google search last month.

The British expatriate all but solved what was for the Japanese a 187-year mystery, while likely uncovering vivid new detail of an epic chapter of colonial Australian history.

“If you’d said I was going to go hunt and find a new pirate ship, I’d have gone, ‘you’re crazy’,” Russell told Guardian Australia. “I just stumbled on it. Boom. There it was on the screen in front of me.

“I immediately knew and as soon as I started checking, everything just fitted so perfectly.”

The ship anchored on 16 January 1830 off the town of Mugi, on Shikoku island, where Makita Hamaguchi, a samurai sent disguised as a fisherman to check the ship for weapons, noted an “unbearable stench in the vicinity of the ship”.

The site is about 900m from where Russell’s holiday house now stands.

It was Hamaguchi’s watercolour sketch of an unnamed ship with a British flag that first intrigued Russell when he saw it on the website of the Tokushima prefectural archive in 2014.

With the help of a local volunteer manuscript reading group, Russell has since worked at translating written accounts of the ship’s arrival by Hamaguchi and another samurai, Hirota, now held by the Tokushima prefectural archive. Hamaguchi’s is called Illustrated Account of the Arrival of a Foreign Ship, while Hirota’s is A Foreign Ship Arrives Off Mugi Cove.

Russell first thought it may be a whaling ship, but the manuscript readers were skeptical. Having learned mutinies were common among whalers, Russell last month Googled the words “mutiny 1829”.
This stumbling upon a link between a samurai record and the story of the Cyprus was the research equivalent of finding a needle in a haystack, according to Warwick Hirst, the former curator of manuscripts at the State Library of New South Wales.
“It was a fantastic find,” Hirst, author of The Man Who Stole the Cyprus, told Guardian Australia. “I have no doubt that the Japanese account describes the visit of the Cyprus.”
What emerges is a picture of a desperate band of travellers, low on water and firewood, who provoked curiosity and suspicion among local warlords vexed by their appearance.
Bound to violently repel them by order of Japan’s ruling shogun, the samurai commanders showed some restraint, giving the foreigners advice on wind direction after raining down cannon balls and musket shot on their ship.

Hamaguchi wrote of sailors with “long pointed noses” who were not hostile, but asked in sign language for water and firewood. One had burst into tears and begun praying when an official rejected an earlier plea.

A skipper who looked 25 or 26 placed tobacco in “a suspicious looking object, sucked and then breathed out smoke”.

He had a “scarlet woollen coat” with “cuffs embroidered with gold thread and the buttons were silver-plated”, which was “a thing of great beauty, but as clothing it was gaudy”.

Hamaguchi’s watercolour sketch of the coat has what Russell said may be a telling detail on the sleeve: a bird that could be a swallow, the skipper’s own stamp on a British military officer’s jacket taken as a souvenir in the mutiny.

The skipper gave instructions to a crew that “in accordance with what appeared to be some mark of respect” followed orders to remove their hats “to the man, most of them revealing balding heads”.

Another samurai chronicler called Hirota noted the crew offered gifts including an object he later drew, which looks like a boomerang.

One sailor bared his chest to the disguised samurai to reveal a tattoo of “the upper body of a beautiful woman”, Hamaguchi wrote.

Another produced “a big glass of what appeared to be an alcoholic beverage and indicated that we should drink”.

“We declined by waving our hands, upon which they passed the glass around themselves, one by one tapping their heads as they drank to indicate the good feeling it brought them, and finished the lot.”

Onshore, the samurai commanders were anxious to follow an 1825 edict by the shogun bolstering Japan’s isolationist policy.
Advertisement

It stated: “All foreign vessels should be fired upon. Any foreigner who landed should be arrested or killed. Every interaction should be reported in the utmost detail.”

Hamaguchi quoted Mima, a local commander, saying he had been “suspicious of that ship since it arrived”.

“The men on the ship do not look hungry at all and in fact they seem to be mocking us by diving off the stern and climbing back onto the ship again,” Mima said. “It is very strange that everyone who goes out for a closer look returns feeling very sorry for them.

“I think they are pirates. We should crush them!”

Mima stayed up till dawn discussing what to do with his superior Yamauchi, who decided: “We should take out a large lead ball and tell them that if they don’t leave immediately, we will fire on them and reduce them to matchwood.”
Yamauchi later told an underling to give some water and firewood if the sailors agreed to leave.

The “barbarians” in sign language told the samurai go-betweens they needed five days to mend sails and paint the ship, one making “a fist with one hand and put it under his cocked head indicating sleep”.

When Yamauchi refused, the skipper asked for three days, then gave the samurai messengers a letter to pass on.
“Commander Yamauchi was not happy. ‘What did you accept a letter from them for? Take it back at once!’” Hamaguchi wrote.

When the ship did not raise its anchor, a cannon fired on the ship like a “thunder clap … followed by an eerie screeching noise as the old deeply pitted ball flew between the two masts of the barbarian ship”.

“Irritatingly, without sign of haste or panic, the crew leisurely spread one sail,” Hamaguchi said.

The ship spread another sail but did not move, prompting an infuriated Yamauchi to order more cannon fire.

With little wind but an onshore breeze, the ship could not sail out to sea and “instead, ignoring the hail of cannon and musketoon balls” sailed west between two samurai firing positions.

Hamaguchi wrote that “at about this time the feudal overseer realised it was a British ship and became extremely angry”, ordering fire on the ship’s waterline.

“Two cannon balls hit and shook the ship badly. The foreigners were standing and yelling.”
Another cannon ball smashed into the ship’s hull, and one or two crew lay on the deck appearing “killed or injured”.

--- Photo --- the watercolour picture of a British-flagged ship that arrived off the coast of Mugi, in Shikoku,

“The others turned towards commander Yamauchi’s boat, all removed their hats and appeared to be praying,” Hamaguchi wrote.

Yamauchi asked an underling when the wind would improve, then was “good enough to share this knowledge with the barbarians through sign language and they swiftly turned the brig across the wind”.

The smaller samurai boats surrounded the foreigners and “a foul stench was coming from the ship”.
When a samurai musketeer
“showed his courage by brandishing his big gun in their faces”, the “barbarians looked worried, cried out and trembled with fear”, Hamaguchi wrote.

This article was amended on 29 May 2017. An earlier version mistranslated Yamauchi as Yamanouchi.
This has been corrected.

Legend of an Australian Pirate Ship in Japan Confirmed 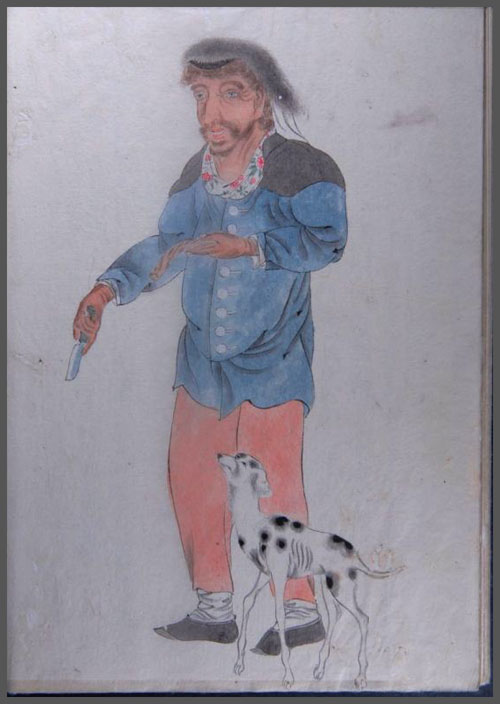 Convicts in Australia hijacked the British ship the Cyprus in 1829. When they were eventually captured,
William Swallow, leader of the pirates, and some of his men were put on trial. They gave an account of sailing to Japan in 1830, but no one believed them. Almost 200 years later, the story was considered a legend -until now.
Nick Russell searched through 19th century Japanese writings and found and translated an account from samurai Makita Hamaguchi that confirms a Western ship showed up at Shikoku island on January 16, 1830.