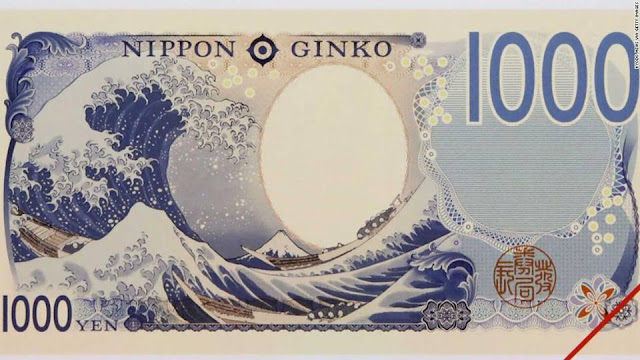 - quote
Japanese banknotes get a makeover
On Tuesday, Japanese finance minister Taro Aso announced that Japanese banknotes will be getting a redesign. The new notes are expected to enter circulation around 2024, the first change since 2004.
Three historical figures
have been chosen for the new designs, selected based on several guidelines. They include that the figures must be widely known in Japan, that their achievements be such that the Japanese people take pride in them, and that precise pictures of them exist so as to prevent forgeries.
There are a couple exceptions to the makeover. The 2000 yen note will remain unchanged, as there are not many in circulation, while the 500 yen coin will be redesigned around 2021.

The new 10,000 yen note will feature famed industrialist Eiichi Shibusawa. He was a driver of Japanese industry from the 19th through early 20th century, and is considered the "father of Japanese capitalism."
Following the Meiji Restoration, Shibusawa worked with the finance ministry before becoming a businessman. He helped establish and develop more than 500 businesses. Among them was Japan's first bank, which eventually became Mizuho Bank. He also created the predecessors of the Tokyo Stock Exchange and the Tokyo Chamber of Commerce.
The reverse side of the note will feature the Tokyo train station building.

The 5,000 yen note will feature Umeko Tsuda, a pioneer in Japanese women's education. She became one of the first Japanese women to study in the United States at 6 years old, and went on to found Tsuda University in Tokyo.
The reverse side will have wisteria flowers.

The 1,000 yen note will feature bacteriologist Shibasaburo Kitasato. His achievements in the field of infectious disease prevention include the development of a treatment for tetanus.
The reverse side is Japanese ukiyoe master Katsushika Hokusai's "In the Well of the Great Wave off Kanagawa." It's one of the world's most famous woodblock prints.

The new notes will be the same size as the current ones but the Arabic numbers will be written in larger letters.

The notes will also incorporate new 3D holograms and other anti-forgery technology. The images will look like they're moving as the angle changes. It's believed this is the first time this technology is being incorporated in banknotes anywhere in the world.
Aso said banknote designs have to be changed every 20 years or so to prevent counterfeiting. He said the changes were announced now because it takes about five years to prepare the new bills.
The finance minister also said the three figures on the notes each made huge contributions to issues that remain relevant today and are appropriate for the upcoming Reiwa Era.
Economic benefit
Experts say the redesign will also be a boost to the economy, creating demand in a range of industries. ...
- source : NHK world / Maiko Eiraku 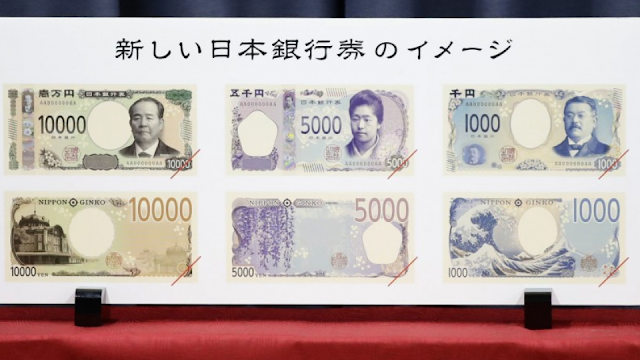 . Hokusai and the great wave .