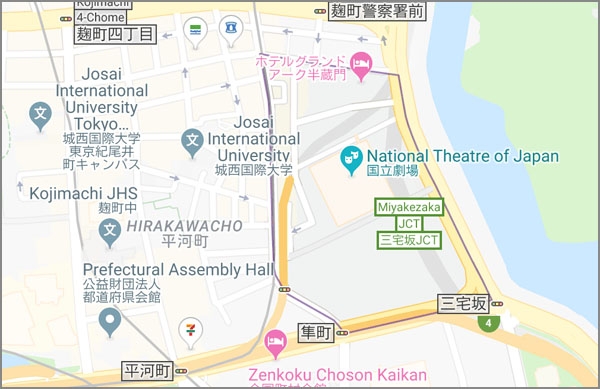 When Tokugawa Ieyasu moved to Edo, he loved falconry and his falconers lived in this district.
Also written 鷹匠町 Takajo cho, falconers district.
There were also many estates of 旗本屋 Hatamoto Samurai in the area.
The name was given to the area after 1868. 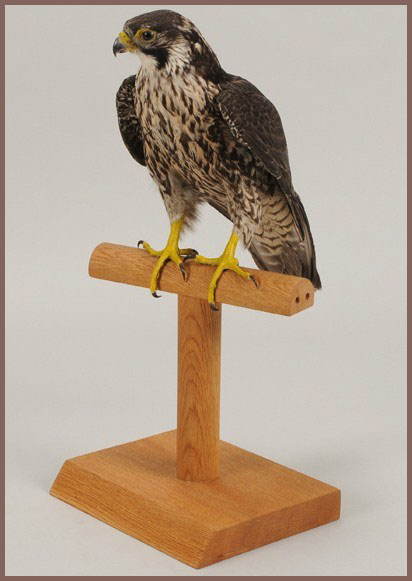 
After the 明暦の大火 great fire of Meireki in 1657 the area was devastated and came under the protection of the Shrine 日枝神社 Hiei Jinja.
In 1691 large parts became hiyokechi 火除地 fire barrier zones.
In 1697, homes were built again and Hayabusacho grew.

The origin of the slope 三宅坂 Mitakezaka goes back to the kamiyashiki上屋敷 main residence of the 田原藩三宅家 Mitake family of the Tahara domain, now 渥美半島 Atsumi peninsula in Aichi.
It is also the place where 渡辺崋山 Watanabe Kazan (1793 - 1841) was born.

During WWII, most of the Mitake estate was used by the military.
A large hospital was built for the soldiers, now known as
国立国際医療研究センター National Center for Global Health and Medicine - NCGM, . 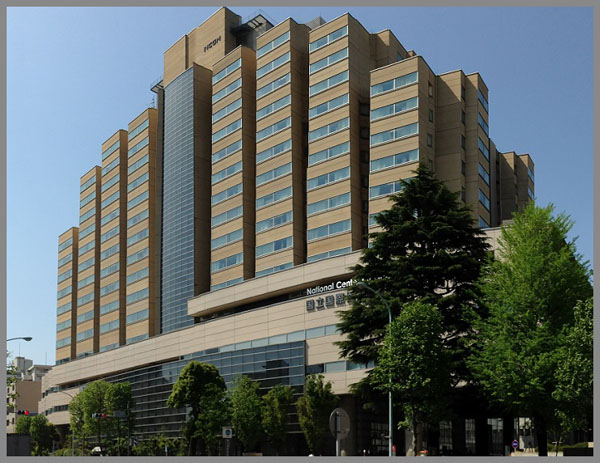 The “Phantom Hospital” appears - NCGM’s origin
-- After the Boshin War (1868–1869), the shoguns kept their soldiers stationed in the outer moat of Edo Castle, even after the transition from wartime to peacetime. In addition, an increasing number of residents of Tokyo started to demand healthcare. The NCGM has its origins in a provisional military hospital established for the sick and wounded inside the Yamashita Gate (Yamashita Gate provisional hospital) on October 1, 1868.
-- Yamashita Gate was located near the intersection of Miyuki-dori and the expressway behind the Imperial Hotel in present-day Ginza; however, today, the only traces of its existence can be found in the name of the Yamashita-bashi elevated bridge. The gate was built by Hosokawa Tadatoshi from Kumamoto Prefecture in 1636, and was said to be the smallest gate of the Edo Castle.
-- The Yamashita Gate provisional hospital was the army’s first core hospital, but it went through a series of name changes and there are no records of its existence, hence, the name “Phantom Hospital.”
-- This provisional hospital had been originally known as the Gunmukan (Bureau of Military Affairs) Treatment Center until Gunmukan was replaced by the Ministry of the Military in 1869, whereupon it became the Treatment Center of the Ministry of the Military. The Kutsuki house of the Fukuchiyama feudal estate of Uchiyamashita-chō provided the hospital with its daimyō’s mansion, located inside what is now Hibiya Park.
-- Its name was changed to Tokyo Garrison Provisional Hospital in 1871, and again to Second Provisional Hospital of the Army a year later. After the closing of the First Provisional Hospital inside Gokoku-ji temple, it was used to house beriberi patients. (Kurosawa Yoshiyuki, Journal of the Japanese Society for the History of Medicine., vol. 40）
-- After that, the army established a hospital in Kōjimachi at the suggestion of Matsumoto Ryōjun. The hospital was newly rebuilt on August 1, 1873 to inherit the work of its predecessor, and served as the army’s main hospital.
- reference source : hosp.ncgm.go.jp/en... -

Kokuritsu Gekijō 国立劇場 National Theater of Japan
- quote -
The National Theatre of Japan (国立劇場 Kokuritsu Gekijō) is a complex consisting of three halls in two buildings in Hayabusa-chō, a neighborhood in Chiyoda, Tokyo, Japan. The Japan Arts Council, an Independent Administrative Institution of the Ministry of Education, Culture, Sports, Science and Technology, operates the National Theatre. It primarily stages performances of traditional Japanese performing arts.
- - - More in the WIKIPEDIA !

最高裁判所 Supreme Court of Japan
- quote -
The Supreme Court of Japan (最高裁判所 Saikō-Saibansho, called 最高裁 Saikō-Sai for short), located in Hayabusachō, Chiyoda, Tokyo, is the highest court in Japan. It has ultimate judicial authority to interpret the Japanese constitution and decide questions of national law (including local bylaws). It has the power of judicial review; that is, it can declare Acts of the National Diet, local assemblies, and administrative actions, to be unconstitutional.
- - - More in the WIKIPEDIA ! 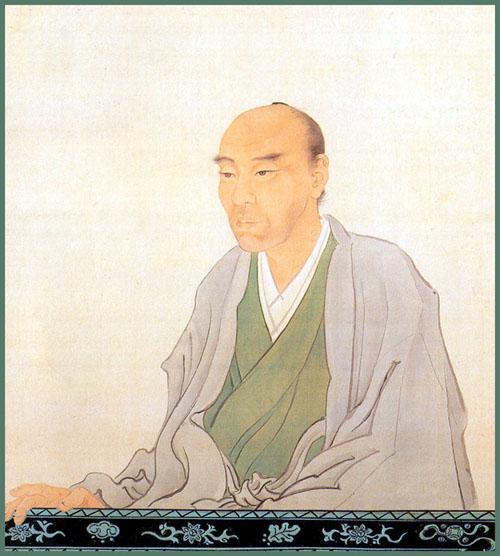 - quote -
... a Japanese painter, scholar and statesman member of the samurai class.
He was born Watanabe Sadayasu in Edo (now Tokyo)
to a poor samurai family, and his artistic talent was developed from an early age. His family served the lord of the Tahara Domain, located in present-day Aichi prefecture. Watanabe himself served the lord of Tahara as a senior councilor, one of his achievements being said to be protecting the domain from even a single death from starvation during the Tenpō famine. He was heavily influenced by the artistic styles of the West, forming a unique style with elements of Japanese and European art.
Like many other Edo-period artists,
Kazan painted realistic portraits of his subjects using the effects of shading which he learned from European paintings. On the one hand, he was a traditionalist Confucian, who believed in filial piety and loyalty to his daimyō, and on the other he was enthusiastic about Western ideas regarding science and politics. He wrote two private essays which were interpreted as being critical of the Shogunate's defense of Tokyo Bay and promoting Western ideas. Although these papers were discarded by Watanabe, they were found and he was tried and exiled to his home province of Tahara. One of the conditions of his exile was that he wouldn't sell his paintings, however Watanabe continued selling his paintings in secret due to financial hardships. This was eventually discovered leading to the suppression of his works and house arrest.
Due to the political turmoil involved in this,
Watanabe committed ritual suicide (seppuku) as a way to amend for the embarrassment he caused his lord.
- - - More in the WIKIPEDIA ! 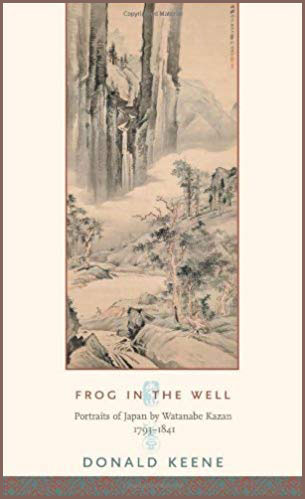 Frog in the Well
is a vivid and revealing account of Watanabe Kazan, one of the most important intellectuals of the late Tokugawa period. From his impoverished upbringing to his tragic suicide in exile, Kazan's life and work reflected a turbulent period in Japan's history. He was a famous artist, a Confucian scholar, a student of Western culture, a samurai, and a critic of the shogunate who, nevertheless, felt compelled to kill himself for fear that he had caused his lord anxiety.
During this period,
a typical Japanese scholar or artist refused to acknowledge the outside world, much like a "frog in the well that knows nothing of the ocean," but Kazan actively sought out Western learning. He appreciated European civilization and bought every scrap of European art that was available in Japan. He became a painter to help his family out of poverty and, by employing the artistic techniques of the West, achieved great success with his realistic and stylistically advanced portraits.
Although he remained a nationalist
committed to the old ways, Kazan called on the shogunate to learn from the West or risk disaster. He strove to improve the agricultural and economic conditions of his province and reinforce its defenses, but his criticisms and warnings about possible coastal invasions ultimately led to his arrest and exile.
Frog in the Well
is the first full-length biography of Kazan in English, and, in telling his life's story, renowned scholar Donald Keene paints a fascinating portrait of the social and intellectual milieus of the late Tokugawa period. Richly illustrated with Kazan's paintings, Frog in the Well illuminates a life that is emblematic of the cultural crises affecting Japan in the years before revolution.
- source : amazon.com... -