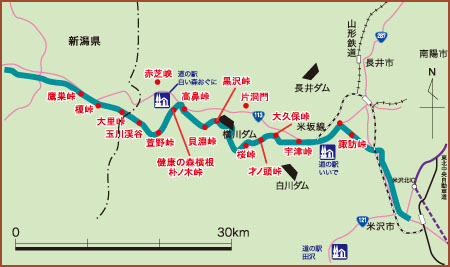 
- quote -
Yonezawa (米沢市 Yonezawa-shi) is a city in Yamagata Prefecture, Japan. Yonezawa is most famous for its local delicacies (apples, yonezawa beef, and carp) and for being a castle town that was once home to the Uesugi clan, including the daimyō Uesugi Yozan.
The area of present-day Yonezawa was part of ancient Dewa Province and was controlled in the Sengoku period by the Date clan. The famed warlord Date Masamune was born in Yonezawa. During the Edo period, the area became Yonezawa Domain under the Tokugawa shogunate, ruled by the Uesugi clan. After the start of the Meiji period, the area was organized into Minamiokitama District, Yamagata Prefecture. The modern city of Yamagata was established on April 1, 1889. ...
- - - More in the WIKIPEDIA ! 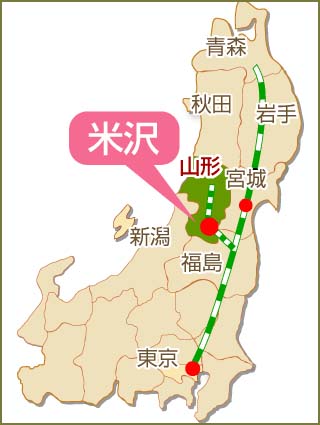 Connecting 山形 Yamagata city with 米沢 Yonezawa city. (and on to 新潟 Niigata)
Present-day highway Nr. 348 leads via 白鷹町 Shirataka town, 宮内 Miyauchi, 飯豊 Iide to 長井市 Nagai city.
This side-road was mostly used for the transport of goods. One important good was salt transported to
置賜 Okitama and the surrounding villages.
Dried fish and even 漆液 liquid lacquer was also transported along this road.
akinai no michi 商いの道 trade road
yama-ai no shiruku roodo 山あいのシルクロード "silk road in the mountains"

In Kotaki there was also a kuchidome bansho 口留番所 checkpoint.
This shows that the highway was of great important to the province governors.
- - - More in the WIKIPEDIA ! 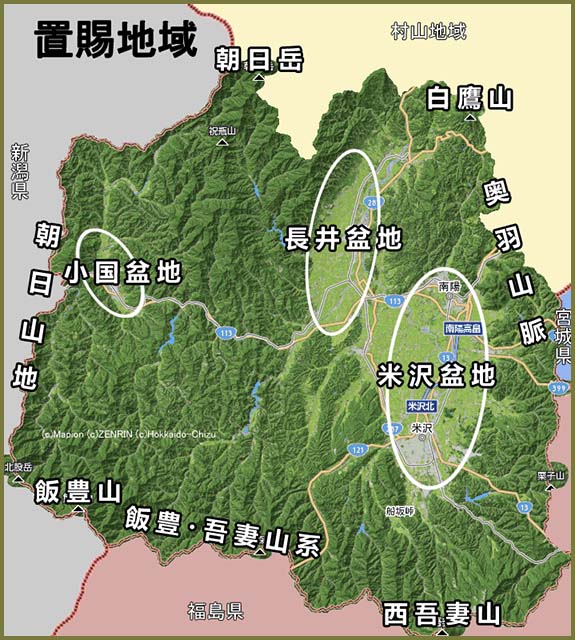 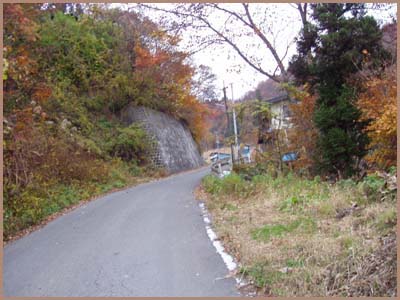 The pass 小滝峠 Kotaki Toge (600m) is now crossed via a tunnel. 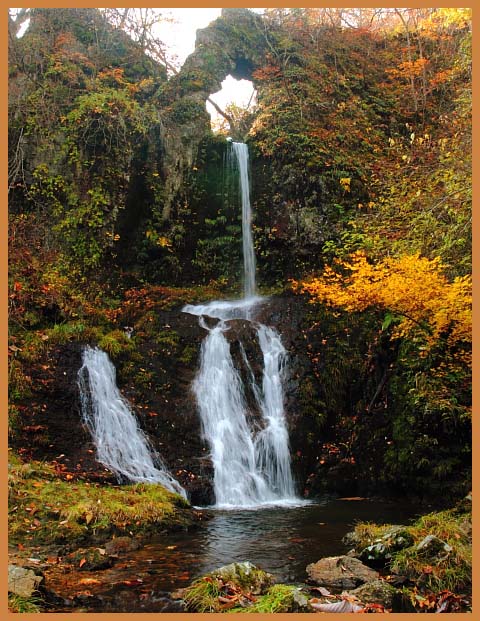 On the way is the waterfall くぐり滝 Kuguri Taki. 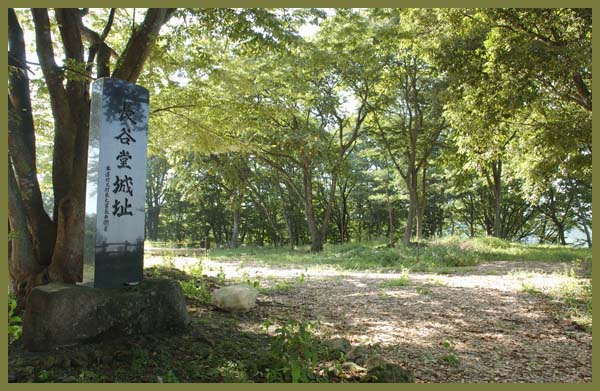 - quote -
The siege of Hasedō 長谷堂城の戦い
was one of a series of battles fought in the far north of Japan's main island of Honshū (the Tōhoku region) contemporaneous with the famous and decisive campaigns between Tokugawa Ieyasu and Ishida Mitsunari further south. Over the course of the year 1600, Naoe Kanetsugu, a general loyal to Ishida Mitsunari, would lead a campaign in Tōhoku, which included the siege of Hasedō castle, near Yamagata, which was his ultimate goal. Hasedō was held by Shimura Takaharu, and backed by a Tokugawa-loyal army of the Date clan.
Three thousand of Naoe's men
moved towards Yamagata from the north while Naoe began his siege on Hasedō. Having received reinforcements of 100 horsemen and 200 arquebusiers, he laid siege to Hasedō for fourteen days before an army under Rusu Masakage arrived to relieve the castle. Upon the arrival of the Date forces, Naoe stepped up his siege, and the vanguard under Kasuga Mototada actually reached the walls of the castle before they retreated before arquebuse fire. The garrison then sallied forth and attacked the retreating vanguard in the rear, leading to the near-complete retreat of Naoe's forces.
A small besieging force remained, and fighting continued, in which Naoe's general Kamiizumi Yasutsuna was killed. Shortly afterwards, however, news arrived of Tokugawa Ieyasu's victory at Sekigahara, and so Naoe called a full withdrawal of all his forces back to Yonezawa, putting an end to his campaigns in the north.
- - - More in the WIKIPEDIA !

This old road was already used in the Heian period by the mendicant priest
. 西行法師 Saigyo Hoshi (1118年 - 1190) .
At his time, the pass on the Kotaki road was called 黒森峠 Kuromori Toge.

Deep within the mountains
the mind's moon
shines so bright.
It's light mirrors all things
like the enlightened mind.


- quote -
Nanyo (南陽市 Nan'yō-shi)
is a city located in Yamagata Prefecture, Japan. As of October 2015,
... The area of present-day Nan'yo was part of ancient Dewa Province.
After the start of the Meiji period, the area became part of Higashiokitama (Higashi-Okitama 東置賜)  District, Yamagata Prefecture. The modern city of Nan'yo was established on April 1, 1967 by the merger of the former towns of Miyauchi and Akayu with the village of Wagō (和郷村 Wago).
Akayu 赤湯町 is famous for its hot springs, cherries and hang gliding and includes the former village of Nakagawa.
Miyauchi 宮内町 is famous for its chrysanthemum festival and the Kumano-taisha Shrine, and includes the former villages of 漆山 Urushiyama, 吉野 Yoshino, and 金山 Kaneyama.
The village of Wago was created in 1955 by the merger of the villages of Okigō 沖郷 and Ringō 梨郷.
The English travel-writer Isabella Bird visited Akayu in 1878 and wrote about the town in Unbeaten Tracks in Japan. The city is named after Nanyang, China, where according to legend a chrysanthemum spring can make drinkers immortal....
- - - More in the WIKIPEDIA ! 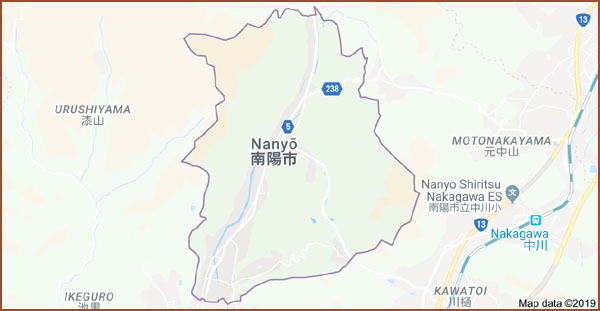 Inari sama 稲荷様 Inari fox deity
Walking along the 小滝街道 Kotaki Kaido toward 富ノ中 Tominoju, there is a place called 「しらすば」Shirasuba.
The road becomes very narrow and
to the left is「しげだ」 Shigeda, the home of the 吉田家 Yoshida family with 地蔵様 a Jizo sama,
to the right is「しらすば」Shirasuba, the home of the 阿部家 Abe family with 稲荷様 an Inari sanctuary.
Jizo and Inari of them often meet secretly at night. If someone observes them during these visits, he will be cursed.

buyobuyo shita pinku iro no kaibutsu ブヨブヨしたピンク色の怪物 a pink flabby monster
A villager felt something strange and opened the door, when he saw a pink, flabby monster outside. Something like the arm of a starfish sneaked through the gap in the door and grabbed his neck. He was torn out of the house and died. Similar stories happened until the Meiji period.

- - - - -
gairaago ガイラーゴ Gairaago
Gairaago looks like a frog, but is very feroucious. When it sees a person, he begins to shout ゲエッ geeee geee and pursues the human, then jumps on it.
Some say it is a toad monster of more than 10 m hight, sometimes coming down from the mountain and crushing the homes of people.
Gairago ガイラゴ
looks like a namekuji ナメクジ slug of about 1 meter long. It crawls around the river pool and when it sees a human it hides in the shade. It does not harm humans, it is very coward.
geerago ゲーラゴ a special frog monster
Another monster, like Gairago, living on trees. If a human passed below it, it falls down, clings to the neck and begins to suck blood.
It is about 20 cm long and shouts キーキー gii gii .
It does not have eyes but catches any sound. Its mouth is very large and has fangs.

Iwakura sama no rei 岩倉さまの霊 the spirit of Mister Iwakura
In the family of 大津清孝 Otsu Kiyotaka there is a photo of Mister Iwakura.
The daughter-in-law had tried yoosan 養蚕 to grow silk worms and worked very hard on it, but one morning she found something under the boards that looked like the scaled of a serpent.
When she told the neighbours about it, they said because she had been so diligent and serious with the silk worms, Mister Iwakura (the patron of local silk worms) had come.
On the photo there is something flimmering in the background of the room.

. hebi densetsu 蛇と伝説 Legends about snakes and serpents .
A monk who could not see well had been lost at night on the mountain road and spent the night in a cave. Because he felt lonely he begun to play his biwa 琵琶 lute. In no time a young woman appeared and asked for more music. He played a long sond and then asked who the lady might be. She said she was the local serpent, and also had some children. She said they were very hungry and to get food she would produce a flooding and then they can eat the villagers who have drowned.
When the monk came to the village next morning, they went out and found a dead serpent. She had died after telling her story to the monk and now the villagers built a small sanctuary for her.
- - - - -
In Mokusawa town 杢沢 / 杢の沢 there is an old swamp called 沼の平 Numa no Daira. Once it rained for more than 10 days in the region and the villagers were in danger of flooding.
In this swamp lived a serpent, who might have called for the rain. The villagers consulted with others and then decided to throw a kanabo 金棒 metal stick into the swamp, to make the serpent go away. They went to a kajiya 鍛冶屋 blacksmith, had him make a large metal stick and threw it into the swamp. On this day, the rain stopped!

. Legends about kajiya 鍛冶屋 the blacksmith .

. kitsune densetsu 狐と伝説 fox legends .
A man on his way home from a memorial serivce for a dead relative was carrying some presents, but was bewitched by a fox.
He went to the deep mountain forest, spread firewood like a bed and slept there. When he woke up he found that he had broken a rib bone. 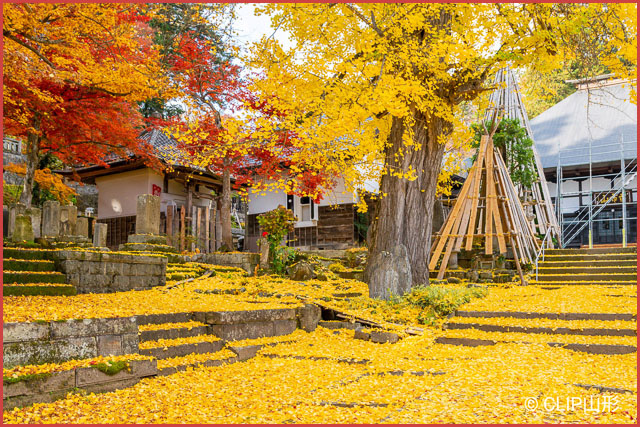 oo icho no ki no sei 大いちょうの木の精 the spirit of the huge Gingko tree
At the Temple 珍蔵寺 Chinzo-Ji lived a priest who liked to drink. Since he needed money to buy Sake he thought of selling the huge Gingko tree in the temple compound.
That night a beautiful woman appeared in his dream and asked him with tears in her eyes not to cut down the tree.
So the priest did not have it cut down. In the dream the lady had told him her name was 「いちょう」 Ichoo, he was sure it must have been the spirit of this wonderful old tree.
-
This temple is famous for the story about tsuru no on-gaeshi 鶴の恩返し
- The Gratitude of the Crane -