Emperor proclaims enthronement in a ceremony 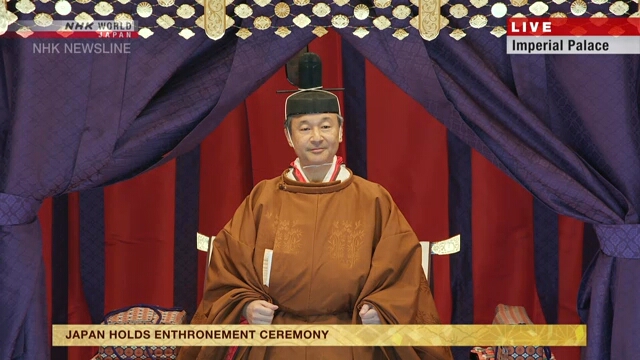 A ceremony to mark the accession of Japan's Emperor Naruhito has taken place at the Imperial Palace in Tokyo. He took the throne in May. Today his accession is being celebrated by leaders of Japan and dignitaries from around the world.

He gave the following speech:

Having previously succeeded to the Imperial Throne in accordance with the Constitution of Japan and the Special Measures Law on the Imperial House Law. I now perform the Ceremony of Enthronement at the Seiden State Hall and proclaim my enthronement to those at home and abroad.
I deeply reflect anew that for more than 30 years on the Throne, His Majesty the Emperor Emeritus constantly prayed for the happiness of the people and world peace, always sharing in the joys and sorrows of the people, and showing compassion through his own bearing. I pledge hereby that I shall act according to the Constitution and fulfill my responsibility as the symbol of the State and of the unity of the people of Japan, while always wishing for the happiness of the people and the peace of the world, turning my thoughts to the people and standing by them.
I sincerely hope that our country, through our people's wisdom and unceasing efforts, achieves further development and contributes to the friendship and peace of the international community and the welfare and prosperity of humankind. 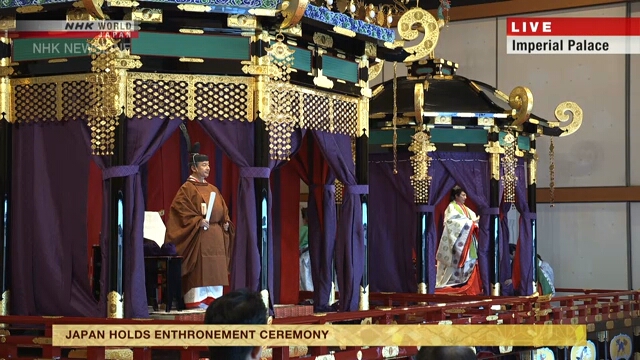 The "Takamikura" throne is said to have been used for important ceremonies since the Nara period, which began in the 8th century.
The current throne, along with the Empress' "Michodai," or the "August Seat", was made in 1913 upon the accession of Emperor Taisho. It has since been used by his two successors: Emperor Showa and the current Emperor's father, Emperor Emeritus Akihito.
The "Takamikura" stands nearly 6.5 meters high. It consists of an elaborately decorated octagonal canopy on a 6-meter-square dais.
The sides of the raised platform are decorated with panels of a phoenix and a dragon-headed creature, called a "Qilin."
The canopy is topped with a large golden statue of a phoenix. Smaller statues adorn the eight corners, with 28 mirrors between them.
Stands called "An" are placed inside the "Takamikura". It is where the sacred sword and the sacred jewel, along with the State Seal and the Privy Seal will be placed.

The "Michodai" has a similar structure, but it is slightly smaller. It's 5.5 meters high, with a 5-meter-square dais.
Curtains hang under the canopies with chairs for the Emperor and Empress in the middle.
At the enthronement ceremony, the Emperor ascends the dais and proclaims his accession.
The Emperor and Empress will only be seen once the curtains are opened. 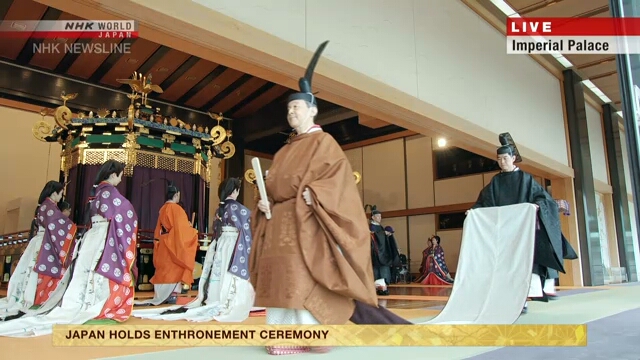 The Emperor will wear a traditional reddish brown robe called the "Kourozen-no-Gohou" that can be worn only by an emperor.
The robe was already used as attire for emperors in the 9th century.
It has patterns of paulownia, bamboo, phoenix, and the imaginary Chinese beast called "Qilin" woven in the cloth.
Emperor Meiji was the first emperor who wore the Kourozen-no-Gohou for his enthronement ceremony in 1868.
His predecessors, including his father Emperor Komei, wore a Chinese-style red robe called "benpuku" for their enthronement ceremonies.
Currently, Kourozen-no-Gohou is most commonly worn for rituals at the Imperial Palace.
The Emperor wore the attire a week after his accession to the throne in May for the first time. He performed rituals to report to his ancestors and various deities the dates of main ceremonies following his accession.


A new role as Emperor and Empress
It's been almost half a year since the Emperor ascended the throne. While Emperor Naruhito has been following in his father's footsteps as a Symbol of the state, he's also been searching for a more modern vision as Emperor.
On May 1, the Emperor took part in the "Kenji-to-Shokei-no-gi" -- a ceremony to inherit the Imperial Regalia from his father, Emperor Emeritus Akihito.
"I sincerely pray for the happiness of the people and the further development of the nation, as well as the peace of the world," the new Emperor said in his first speech.
To celebrate the succession, 140,000 people visited the Imperial Palace. The couple appeared on the palace balcony six times three days later to greet the public.
The couple has embarked on a new period of imperial diplomacy. Both have spent years living overseas, and have a wide range of international experience to draw on in their interactions and activities going forward.
In late May, the US President came to Japan as a state guest. Both the Emperor and Empress were able to talk with the Trumps without translators.
The imperial couple has visited many regions of the country. One destination was Aichi Prefecture, in central Japan. Crowds of people gathered along the roads to welcome the pair. One woman said, "I don't know why but I have tears in my eyes." A young mother said, " Seeing them inspires me to do my best in life, with my child."
The imperial couple went to a facility for people with disabilities in the prefecture, staying beyond their scheduled hours so they could speak with everyone.
On August 15th, the couple attended a government ceremony to mark the 74th anniversary of the end of World War Two. The Emperor expressed his hope for peace.
He said, "Reflecting on our past and bearing in mind the feelings of deep remorse, I earnestly hope that the ravages of war will never again be repeated.
Together with all of our people, I now pay my heartfelt tribute to all those who lost their lives in the war, both on the battlefields and elsewhere, and pray for world peace and for the continuing development of our country."
Emperor Naruhito and Empress Masako have continued to travel across the country, as part of their goal in building a strong bond with the Japanese people, from children to elders.


Who are ceremonial attendants?
People in traditional robes will line the palace corridor, as the central enthronement ceremony, called "Sokuirei-Seiden-no-gi," takes place in the "Matsu-no-Ma" State Room.
Ceremonial attendants including "Iginomono," who each carry a sword, a bow and arrows, as well as "Igimono Hojisha," who bear ceremonial items and officials in charge of gongs and drums were originally scheduled to take part.
A total of 78 of the attendants were planned to stand in line outside in the courtyard, along with other officials. But the Imperial Household Agency decided at the last minute to reduce the number to 25 because of heavy rain.
Twenty-six banners, called "ban," will be displayed in the courtyard, as originally planned.
Two bear the word "Banzai" and are nearly nine meters long. The word is embroidered in gold yarn, based on calligraphy drawn by Prime Minister Shinzo Abe.


Ceremony marked with commemorative events
Railways and other businesses across Japan are celebrating the Emperor's enthronement ceremony with special offers.
The operator of the 333-meter-tall Tokyo Tower started selling 10,000 tickets to its main observation deck from 9 a.m. on Tuesday.
The tickets, featuring designs marking the ceremony, are priced the same as regular tickets. Many visitors purchased them, with some saying they made the trip just to get the souvenirs.
Visitors to the 150-meter-high deck were enjoying the view of the capital under rainy skies.
A man in his 60s said he wants people to use the national holiday to celebrate the enthronement and think about the preciousness of peace.
Osaka Metro is also selling commemorative tickets. More than 100 people waited in line early on Tuesday morning at a special sales booth set up at Shin-Osaka Station on the subway Midosuji Line.
The 9-by-20-centimeter ticket features phoenixes, chrysanthemum flowers and other images. One set contains five tickets. A total of 5,000 sets were on offer.
A sixth-grader says he will put his set on display in his bedroom.
People in Dazaifu City in Fukuoka Prefecture, western Japan, are also in a festive mood. The city is associated with an ancient poem from which the name of Japan's new era, Reiwa, was taken.
West Japan Railway added a supplementary name, "Reiwa no Sato," to its Tofuro-mae Station, which is close to the Sakamoto Hachimangu shrine.
The railway unveiled a new name plate for the station in a ceremony on Tuesday.
The design features images from Japan's oldest poetry anthology, which inspired the name Reiwa.