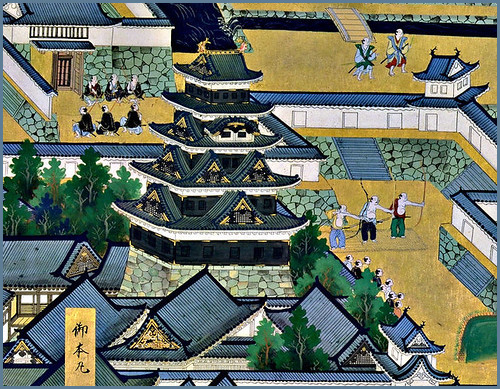 What was inside the castle?
When considering Edo-period castles, many people imagine castle keeps (tenshukaku 天守閣). 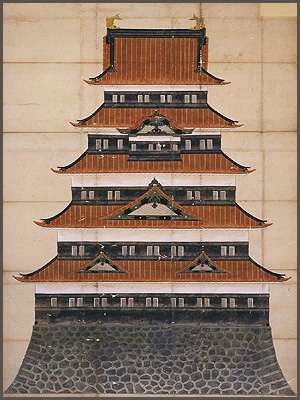 In 1607 (Keichō 12), on the orders of Tokugawa Ieyasu, the initial keep of Edo Castle (called the Keichō Keep) was constructed on a scale that was far in excess of that of Osaka Castle, which had previously been constructed by Toyotomi Hideyoshi. The size of the Keichō Keep was designed to symbolize Tokugawa’s authority. Thus, at the time of its building it was the largest castle keep in Japan.

The castle keep was subsequently rebuilt on two occasions, firstly during the administration of Tokugawa Hidetada in 1623 (Genwa 9) and secondly during the administration of Tokugawa Iemitsu in 1638 (Kanei 15). Unfortunately, the keep was subsequently lost in 1657 (Meireki 3) to the so-called furisode kaiji (the kimono fire), which is better known to history as the Meireki no taika (The Great Fire of Meireki). Following this, the keep was not rebuilt and instead, greater emphasis was placed on reconstructing Edo. Indeed, it is said that reconstruction of the keep was halted in response to an opinion that "expending money on such a scenic site represented a waste." Later, the issue of reconstruction was again floated in 1712 (Shōtoku 2), however, reconstruction was not realized before the Tokugawa Shogunate ended.

Edo Castle is circled by an inner trench and consists of two parts: one is the residence of Tokugawa shōgun, while the other is that of the prospective Tokugawa shōgun. The former consists of three parts, such as "Honmaru", "Ninomaru", and "Sannomaru", while the latter consists of three parts, such as "Nishinomaru", "Fukiage", and "Kitanomaru". Outside of this interior trench, there were residences of local feudal lords and those of townspeople as well as temples and shrines, all of which are surrounded by the outer trench. These two make up the whole part of the Edo Castle. Tokugawa Ieyasu commissioned Edo Castle and the city of Edo and they were finished as a whole in 1636 (the 13th year of kan-ei era) at the time of Tokugawa Iemitsu. The city was burnt down several times and reconstructed, but the size itself remained unchanged throughout the Edo period.

The Omote area of the palace contained the formal rooms Ō-hiroma, and Shiro Shoin and Kuro Shoin drawing rooms where a number of different ceremonies and events were held.
Closest to the entrance, the Ō-hiroma was made up of areas such as the upper chamber, middle chamber, lower chamber, second chamber, third chamber, fourth chamber, tatami-matted corridors, and planked verandas. The hall spanned over 50 meters from east to west, making it the largest room in the castle. The coffered ceilings of the upper, middle, and lower chambers looked like a grid sheet. Each level up to the upper chamber was higher than the ones before, as did the floors, and featured more splendid ornamentation. The partitions between rooms were adorned with those motifs considered most formal—pine trees and cranes—painted by artists of the highest standing, further enhancing the majesty and solemnity of the Ō-hiroma.

Important events were held in the Ō-hiroma, such as the New Year’s ceremony and audiences with foreigners. By viewing the Shōgun seated in the upper chamber from their seats assigned to his household status, each Daimyō inescapably recognized the master-servant relationships. The formal Ō-hiroma served as the ultimate stage set for exemplifying the dignity of the Shōgun. 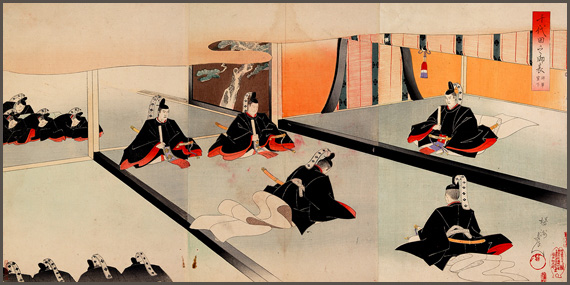 The Shiro Shoin (map)
consisted of five rooms—the upper chamber, lower chamber, Teikannoma (Chamber of the ancient Chinese emperors), Renganoma (renga no ma 連歌の間 Chamber of linked poems), and a Nandogamae (納戸構え closet style doorway) — which were encircled by a veranda.
The Teikannoma (Teika no ma 帝鑑の間) served as the antechamber for Daimyō from the oldest servant households of the Tokugawa household.
The upper chamber of the Shiro Shoin was decorated in the formal style of traditional Japanese architecture and was the second most formal room after the Ō-hiroma. The paintings on the walls depicted the normative deeds of famous Chinese emperors (teikan-zu).
The Shiro Shoin was used to meet with the Gosanke households (three households with direct kinship to the Tokugawa household) and others during celebrations such as the Five Festivals and New Year's holiday. Depending on the ceremony, it was sometimes used together with the Ō-hiroma. The courtyard in front of the Shiro Shoin was also used to showcase kemari (a type of ball game) and martial arts performances, which the Shōgun would view from the lower chamber. 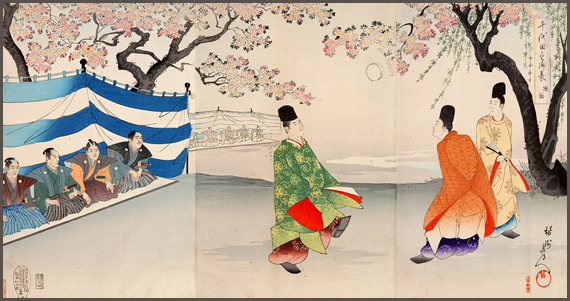 The Kuro Shoin (map)
was used for the most routine meetings within the Omote Front Palace, such as the ones known as the Tsukinami held on the 1st, 15th, and 28th day of each month with the Council of Elders and high-ranking Daimyō from the Gosanke households (three households with direct kinship to the Tokugawa household), the Kaga-Maeda household, and the Echizen-Matsudaira household. Special meetings between the Shōgun and various government officials were also held here.
The Kuro Shoin consisted four rooms surrounded by a veranda: the upper chamber, lower chamber, Saikonoma (Saiko no ma 西湖之間) (Chamber of Lake Sai), and Irorinoma (Irori no ma 囲炉裏之間) (Fireplace Chamber).
While other palaces were constructed of Japanese cypress, the Kuro Shoin was built from Japanese red pine. As reflected in its name, the Irorinoma contained a sunken fireplace (irori) in the center of the room.
Ink paintings of landscapes adorned the upper chamber, lower chamber, and Saikonoma of the Kuro Shoin, and the north face of the upper chamber featured a tokonoma (alcove) with tatami flooring and a set of staggered shelves. This room layout combined with the lack of a built-in table and storage area like those found in the Shiro Shoin tells us that the space was used for routine, everyday meetings. 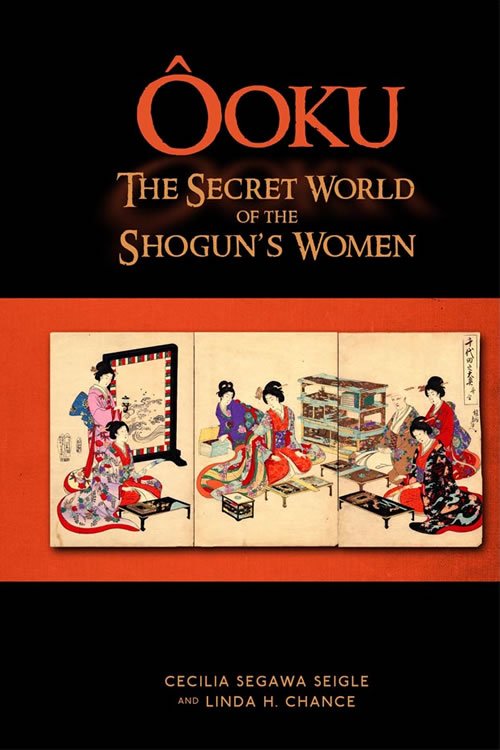 Ōoku, The Secret World of the Shogun’s Women
Cecilia Segawa Seigle and Linda H. Chance
- quote -
The institution of the “Great Interior,” or Ooku, was the residence for the Tokugawa shoguns’ wives, concubines, mothers, daughters, and their female servants for close to three hundred years, from about 1600 to 1868. “Great Interior” also referred to the network of its residents. Run by and for women, yet situated at the apex of the Japanese social order, as the samurai warrior class and its ruling shogun designated themselves, the Ooku was simultaneously a world hidden from public view by well-guarded walls and a focus of enduring questions about its customs and power.
The Ooku was built, and its rules developed, to protect and promote the women of the shogunal household, and to project the masculine authority of the shogun as the head of the premier military family. Samurai attitudes toward and views of women prior to these three centuries, Tokugawa period Neo-Confucian ethics, the societal emphasis on female virtue according to Confucian and Buddhist precepts, and women’s own self-evaluations, all infused the character of the Ooku.
The focus of this study is the power structure, formal and informal, of the women who lived in the Ooku, especially the core phalanx of this institution, the ladies-in-waiting. They constituted the larger part of the Ooku staff who forged its character. Most of them were the daughters of knighted-class samurai (hatamoto, bannermen) and were brought up to dedicate themselves to their Tokugawa master and mistress, many of them for life, never forming any personal relationships with men. This single-minded loyalty united the young women in the Ooku, who prove to be on the whole well-disciplined, well-intentioned women, faithful to their duties and respectful to superiors in the hierarchical structure, who steadily grew more powerful through the Ooku’s history. The role of these ladies is key to understanding this remarkable, long-sustained institution, which grew during a time when the notion of women leading an institution was very much out of character.
Their power was a hidden phenomenon few people paid any attention to for many generations.
In the last several decades, scholars of all areas of Japanese studies, but particularly historians, have paid extraordinary attention to the Edo period, which roughly coincides with the time the Ooku existed. Whereas the early feminist investigation of Japanese history in the 1970s emphasized the patriarchal nature of Japanese society and designated women as the oppressed class, more recent studies have made great strides in reevaluating and celebrating them, stressing the positive aspects of women’s lives in Japanese history and highlighting their contributions to the civilization and culture as well as the socioeconomic and even political development of Japan.
The “Great Interior,” both an enormous space and a set of rules and protocols, existed to protect the aristocratic wife of the ruling shogun and to secure an heir by concubinage in order to sustain Tokugawa prosperity. Organized as tightly as the samurai in a bureaucratic structure, women there led disciplined and professional lives. Unlike their counterparts in the imperial court, however, these samurai women wrote little themselves because they had sworn upon entry to the Ooku not to speak or write of what they saw or heard. The primary records of their institution were destroyed at the end of the shogunate. Reconstructed through original research in manuscripts legible only to the highly trained few, diaries, historical records, and testimonies about life in the Ooku offered long after its demise, the account in this book details not only the physical and organizational layout, but also the aspirations and expectations of women who lived in this singular hierarchical world. Bound to serve for life, held to standards of loyalty and tradition, these women at once complete and complicate the understanding of the era.
The field of early modern Japanese studies is burgeoning, but the number of scholars who have the linguistic skills to deal with such a wide array of manuscript materials in out-of-the-way archives and present the results of their research in English is miniscule––this makes this book all the more valuable given how the authors have made painstaking efforts in locating, making sense of, selecting, and translating a vast range of material for a scholarly audience. The book will thus be an invaluable, essential resource for those in Asian studies, specifically Japanese studies, and women’s studies. Specifically, it will be essential reading for all those interested in Edo period history and in gender studies of Japan more broadly. It is also important for the comparative history of palace women, and for studies of the early modern world, which increasingly take a global approach.
- source : cambriapress.com/pub ... -

Email ThisBlogThis!Share to TwitterShare to FacebookShare to Pinterest
Labels: - - - Architecture