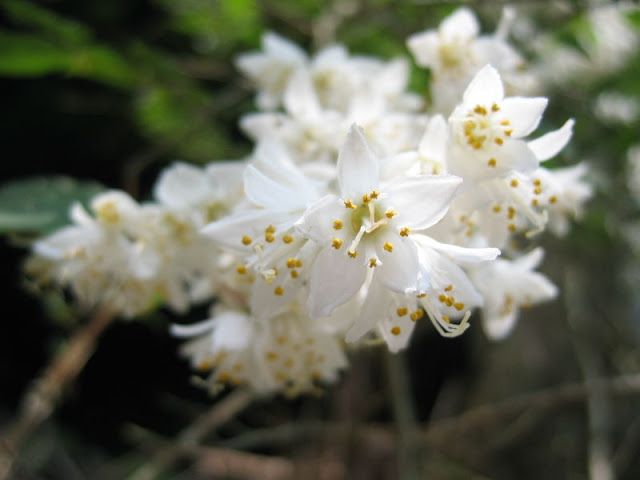 
The first version of this hokku was written in the 4th month (May) of 1819, the year recorded in Year of My Life, though in the final draft of that haibun work the last line, "moonlit night," has been replaced by "light [from deutzia blossoms]." The hokku before this hokku in Year of My Life has a third-night crescent moon in it, so Issa may have felt it would be redundant to mention the moon again, since the hokku in that work form series and reverberate with each other. Thus the moon in the hokku above is probably also a faint crescent moon, as mentioned in the previous hokku.

The hokku above seems to be about a haikai poet who went by the haikai name of
Dokurakubou (獨楽坊), Monk Who Enjoys Being Alone (or: Monk Who Is Spontaneously Happy), and also by the name Chidou, (知洞) Chido, Knower of Caves.
He was Issa's friend and student for many years and head priest at the old Shingon Buddhist temple of Baishooji (梅松寺) in Rokugawa in Obuse, a town not far from Issa's hometown. Issa writes the monk-poet's name before the hokku, indicating that the hokku is about the monk.

If it were about Dokurakubo's living quarters, Issa would probably have used the name of the temple, which he often visited. In the hokku it is an early summer night, and there is a slender moon in the sky, but when Issa reaches the temple, there doesn't seem to be anyone there. Issa seems to go around to the head monk's bedroom, which probably opens toward the back of the living quarters building, and when he nears the bedroom the sliding doors between the room and the low porch are still open, and inside he is able to barely make out, in the dim light of the moon that is reflected softly by the white deutzia flowers just outside, the shape of the monk already asleep. Since the light is so faint, perhaps it is an otherworldly moment.

Here is the same hokku as it appears in Year of My Life, together with the previous and following hokku:

dharma-filled temple --
a snake, too, has left behind
its worldly robes


The first and last hokku deal directly with transformation -- a larva becoming a mosquito ascending and somehow communing with the crescent moon and a snake shedding its skin in the precincts of Baishoji Temple, so it's likely the middle hokku is also about transformation -- perhaps evoking the way the head monk has reached a higher spiritual level and just sleeps when he feels like sleeping, even though the night has just begun and his visitor hasn't arrived yet. Or perhaps in the faint moonlight the monk seems to Issa almost transhuman, as if he were hovering as he sleeps and apparently about to ascend to a new level of being.

These three hokku stand out and not only reverberate together but clearly mark the end of one section of Year of My Life, and thus they may also refer back (the first hokku rather directly) to the beginning of the section, in which Issa says some people claim to have heard heavenly music every eighth day starting at New Year's, and he wonders whether such heavenly music really exists or not. He is agnostic at the beginning of the section, but perhaps the last three verses of the section are Issa's positive reply to his earlier question to himself: perhaps they are meant as examples of at least semi-heavenly visual "music" which he was fortunate enough to see. 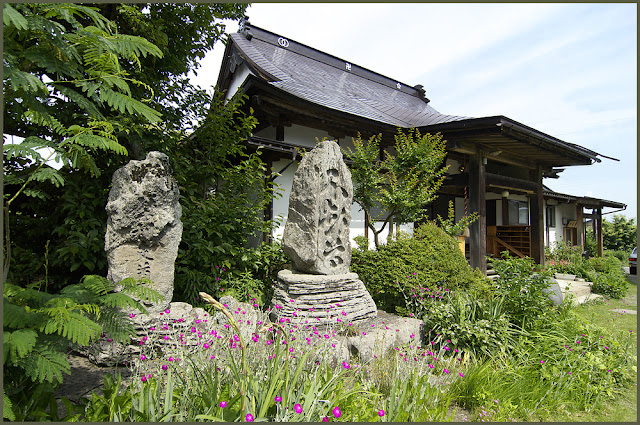 The temple was founded by Saint Seyama 瀬山上人 in the Muromachi period.
Issa visited here first in 1809, to meet his friend Saint Chidoo 知洞上人 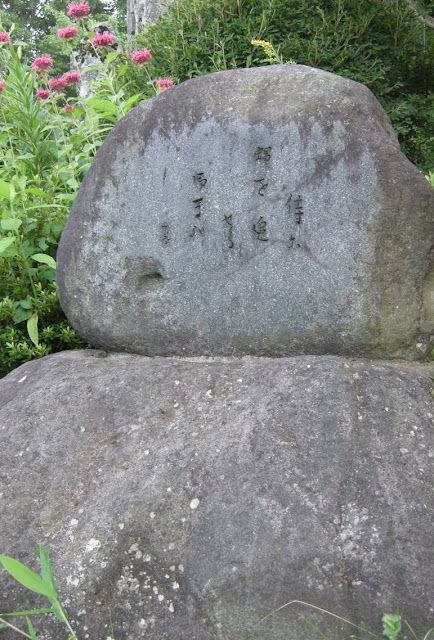 the samurai is ordered
to shoo the flies . . .
Sir Horse

This is a humorous role reversal, as the samurai is commanded to chase off Sir Horse's flies. Shinji Ogawa notes that suru after owa ("to chase") in this context "functions just like the 'make' in the phrase 'make someone do something'."
Perhaps the horse belongs to the samurai's superior, the daimyo?
Tr. and Comment : David Lanoue 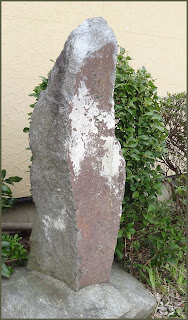