Gestures are part of the daily conversation, but they are differend in each culture. 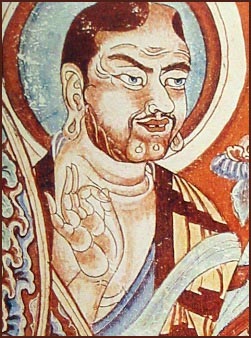 A gesture is a form of non-verbal communication in which visible bodily actions communicate particular messages, either in place of speech or together and in parallel with words. Gestures include movement of the hands, face, or other parts of the body. Gestures differ from physical non-verbal communication that does not communicate specific messages, such as purely expressive displays, proxemics, or displays of joint attention.

Gestures allow individuals to communicate a variety of feelings and thoughts, from contempt and hostility to approval and affection, often together with body language in addition to words when they speak.
© More in the WIKIPEDIA !

. How to count on your fingers - in Japanese .

This autumn hokku was written in the 9th month (October) 1819, the year evoked by Issa in Year of My Life, and the rice heads are ripe and bending over just before harvest. Perhaps the dragonfly is now on one head of ripe rice, and two of its six legs are touching at their tips as if they were palms placed together in prayer or thanks for the good harvest. Or perhaps the dragonfly holds its front two legs around a husk of rice in a way that suggests folded hands. Issa was a realistic and knowledgeable person, however, and it's unclear whether he actually believes dragonflies express thanks by imitating the hands of humans. It's impossible to know from the language of this hokku whether Issa thinks the dragonfly is literally praying or not, so each reader must make her or his own interpretation.

The word tetsuki, "shape, appearance of the hands" suggests to me that Issa knows the dragonfly isn't intentionally folding its front two legs together as if they were hands. My guess is Issa is suggesting that it's a miracle simply that the dragonfly has made a shape that humans can interpret as being an expression of prayer, even though he knows that the shape of two of the dragonfly's "hands" in itself isn't a prayer. Surely Issa realizes the dragonfly must be expressing its thanks in its own complex dragonfly-like way to the rice for providing it with a watery paddy home, yet he's glad that the dragonfly's "hand shape" happens to provide humans with a wonderful utopian "what if" moment.

In another hokku Issa clearly uses "hand shape" to contrast the shape with the reality. In 1825 he mentions the Buddha's hand shape in a hokku about Shakyamuni's birthday, traditionally celebrated on lunar 4/8. The ceremonies include pouring sweet tea over a small statue of Shakyamuni Buddha as a baby in order to symbolically bathe it. The statue is of the baby Buddha standing with his right arm raised and his left arm hanging down, since it is believed that soon after being born the Buddha pointed to heaven with one finger on his right hand and pointed at earth with one finger on his left hand. Thus the right hand of the statue of the baby Buddha usually points heavenward with one finger or sometimes two fingers, a shape that reminds Issa of the hand shape of a child making a strict promise by sticking up its little finger and then hooking it around the little finger of the person to whom the promise is made (see the picture of a baby Buddha below).
Here is Issa's hokku:

Issa does not of course think the statue of the baby Buddha is actually making a finger-promise, but the thought of the baby Buddha making a child's promise is inspirational and mind-opening and is a real contribution to our way of thinking about the Buddha and his compassion toward children. In the same way, the thought that the dragonfly looks as if it were actually praying is inspirational and delightful -- as is Issa's somewhat similar request in another hokku to some melons to become frogs.

Issa likely knows from observation or from farm lore that dragonflies are not passive. Rather, they are active protectors of the rice plants. They are carnivores who eat smaller insects, so the dragonfly in this hokku must be vigilantly waiting as it tries to spot smaller, harmful insects flying by. Traditionally the presence of dragonflies was believed to be a sign of good luck for a rice paddy, and probably the main reason was because dragonflies were known to eat harmful insects and thus significantly reduce crop damage. Surely Issa was aware of this traditional relationship, and he may regard the presence of the protector dragonfly to be part of a wordless mutual expression of thanks exchanged between the rice and the dragonfly, each of which is indebted to the other.

Issa often expresses his personal dislike for working in rice paddies and admits feelings of guilt for usually staying inside while tenant farmers and sometimes his wife did the actual rice farming on the land he received as an inheritance from his father. But he no doubt sometimes looked closely at the rice, especially at harvest time, and he must have been fascinated by the small occurrences going on in the paddies, so I take the mo, "too," in this hokku to include Issa's point of view as well as the view of his wife and the farmers renting his fields.

Here's a photo of people at Sensoji temple in Asakusa in Edo/Tokyo, a temple often visited by Issa. The visitors pray and pour sweet tea over the statue of the baby Buddha on his traditional birthday. The Buddha's right forefinger is in a shape that to Issa resembles the way a child sticks up a finger in order to make a promise: 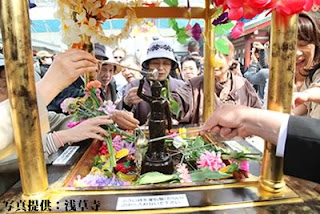