Ishin Sūden (以心崇伝, 1569-1633?) also known as Konchiin Sūden, was a Zen Rinzai monk and advisor to Tokugawa Ieyasu, and later to Tokugawa Hidetada and Iemitsu on religious matters and foreign affairs.
He played a significant role in the initial development of the Tokugawa shogunate.

Sūden oversaw the administration of Shinto shrines and Buddhist temples in the country alongside Itakura Katsushige, and was involved in a great many diplomatic affairs along with advisors Hayashi Razan and Honda Masazumi. Sūden made his home at the Konchi-in temple 金地院 he founded in Sunpu, and founded another one by the same name in Edo in 1618. He was abbot of Nanzen-ji 南禅寺 in Kyoto.

Sūden played an important role in negotiations with the Chinese Ming court over the reopening of trade and the problem of piracy. Sūden was also involved in communications with the Spanish authorities in Manila and with the Kingdom of Siam. He was instrumental in organizing and receiving Korean embassies to Japan. He drafted a great many communications during this period, some of the more notable ones being rejections of the notion that the shogun should be referred to as a "king" (王, ō), as this would imply subordination to the Emperor of China and tributary status within the Sinocentric world order.

Among his other works was the draft in 1615 of the Buke shohatto, which he then read at an assembly of daimyō at Fushimi, and the draft of the edict banning Christianity in the previous year. In 1616, he oversaw the funeral services for Tokugawa Ieyasu, along with priests Tenkai and Bonshun.

Sūden compiled all the diplomatic records of his period of service into the Ikoku nikki 異国日記(Chronicle of Foreign Countries). He authored the Honkō kokushi nikki 本光国師法語 (Chronicles of Master Honkō), both of which remain valuable primary sources on the nature of diplomacy of the time, and on specific events.
© More in the WIKIPEDIA !

Originally established at Takagamine in 1400 .
It was moved to its present site at the beginning of the Edo Period by Ishin Suden.

The Hojo hall is specified for the important cultural asset. In the room, there is famous partition paintings created by Kano school.

The Hassoseki teahouse was designed by Kobori Enshu. It is specified for the important cultural asset. 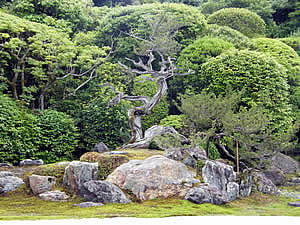 . Buke shohatto 武家諸法度 Laws for the Samurai .
They had been compiled by a number of scholars in service to the shogunate including Ishin Sūden, and were aimed primarily at limiting the power of the daimyō and thus protecting the shogunate's control over the country.