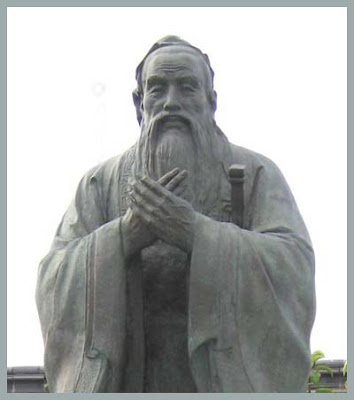 
Confucius said,
I dislike foxtails because they can be mistaken for rice plants.

This hokku was written on lunar 1/8 (Feb. 18) of 1804, when Issa was in the city of Edo. The hokku is about a rice paddy in late July, when the rice plants are growing taller and just beginning to put out heads or ears with rice grains in them. One field, however, turns out not to be growing much rice, although its green stalks look a bit like stalks of young rice plants. If you look closely you can see that many of the new heads that are beginning to take form on the grass contain no signs of rice grains at all. Instead, tufts with seeds for reproduction are appearing where rice heads should be. The name of the grass in the headnote indicates that they are a wild grass in the rice family known as Setaria viridis, or foxtail (莠), which is distantly related to foxtail millet (awa). In Japanese it is called "puppy tail grass" (enokoro-gusa) because of its tufts. 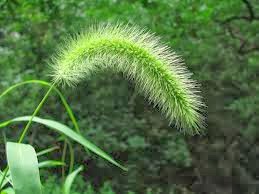 The headnote also indicates that this hokku, unlike an earlier hokku by Issa from 1794 in which millet (hie )invades a rice field, has a strong, explicit ethical dimension to it, since it quotes from a passage in Mencius, or Mengzi, a collection of dialogs and sayings attributed to the ancient Confucian thinker Mencius (Mengzi ). In the passage alluded to by Issa (see the translations below), Mencius explains why Confucius (Kongzi) said that many of the people generally regarded as being most virtuous are actually "thieves of virtue" who look virtuous but are actually simply skillful at adapting and adjusting to the latest fashions and conventions and flattering those in power.

At one point Confucius compares these fake ethical leaders to wild grass that looks like a grain-bearing crop but actually bears no grain, and he declares he dislikes wild-grass weeds. It's this comparison that Issa quotes in the headnote. although in the hokku Issa interprets grain specifically as rice, and the word for weeds or wild grass in Confucius' comparison is usually referred to in Japanese specifically as foxtails. Issa thus turns the rice field in the hokku into an ethical statement, and the "hated" weeds are hated by Confucius for reasons that also apply in Japan. Since the imitation moralists are the great majority, the green field in the hokku is presumably mostly wild grass, and since Issa is in Edo at the time, he is presumably indirectly criticizing the false sense of virtue held by so many self-righteous people in the city, especially by people in the warrior class who can quote Confucian classics in detail while contradicting those teachings with their actions. It seems possible Issa is also suggesting here that the True Pure Land Buddhist beliefs he holds are based on a clear system of ethics and amount to much more than an amoral belief that whatever is is right.


- - - From The Confucius
the A. Charles Muller translation at
source : www.acmuller.net/con-dao

“[And they criticize the prudent], saying, ‘How can they be so aloof and cold? We are all born in this world, so we should be part of it. Being good here and now is sufficient.’ They obsequiously flatter their contemporaries. These are the so-called ‘conventional townsmen.’”

Mencius answered:
“If you want to blame them for something, there is nothing in particular that you can blame them for. If you want to correct them, there is nothing in particular that you can correct them for. They follow the current customs and consent to the vices of the age. They seem to abide in loyalty and honesty, and their actions seem pure. Everyone follows them and because people follow them, people become incapable of entering the Way of Yao and Shun. Thus, they are called ‘thieves of virtue.’”

“The Noble Man returns to the constant and nothing more. Once the constant is properly apprehended, the people will be awakened. Once they are awakened, there will be no more of their evil.”


- The classic James Legge translation of the key passage: