. Nishiyama Soin 西山宗因 .
（1605 - 1682）
He was the first to introduce mosquitoes, fleas and other low insects into haikai poetry, since "every living creature has a heart". 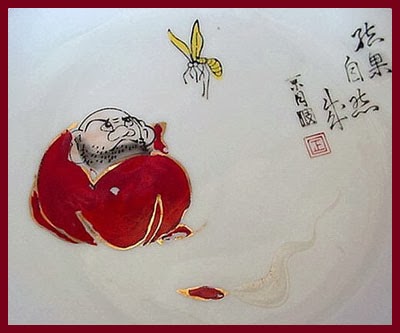 wind blows -
even with lots of holes this is
my mosquito net
Tr. Gabi Greve

a good place
to hear the hototogisu
but all these mosquitoes . . .
Tr. Gabi Greve

The cut marker KANA is at the end of line 3. 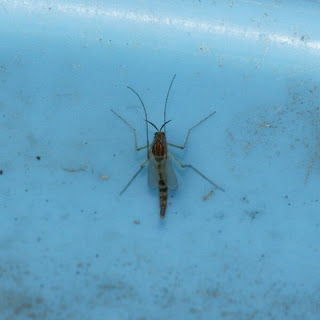 a larva flies, now
a mosquito, up to heaven --
moon above the gate
Tr. Chris Drake

a larva flies, now
a mosquito, up to heaven --
thin crescent moon

In the original version a third-night crescent moon shares heaven with the newly matured mosquito. When Issa put this hokku into Year of My Life he changed three syllables to make it a little softer, but the difference isn't major. See my April 10, 2013 post.

Of course Issa knows larvae can't fly, and he is not suggesting that the larva here is flying up toward heaven. His concise verse implies that the larva has at last turned into a mature mosquito that is able to fly. The term "flying/rising up to heaven" seems to have three meanings here. First, the mature mosquito takes off for the first time into the evening sky. Second, the mosquito must be so glad to have left behind its larva and pupa stages that it's as happy as if it were in heaven. And third, Issa celebrates the mosquito's growth from a mere larva and then pupa and its discovery that it can fly. Momentarily he seems to feel none of the ordinary aversion humans have toward mosquitoes. Instead, he seems to be imagining what it must feel like to be a newly mature mosquito that believes it can fly anywhere, even to heaven. However, the moon rising above the gate suggests that heaven is a actually a bit higher than the mosquito thinks it is. 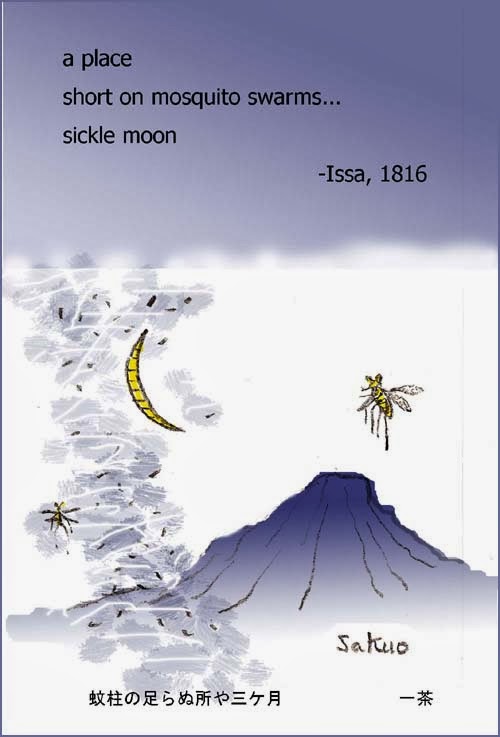 not enough mosquitoes
in part of the swarm --
thin crescent moon

This humorous, ironic hokku was written in the 6th month (July) in 1816, when Issa was living in his hometown. Tall mosquito columns are formed at twilight on summer evenings by male mosquitoes hoping to mate with females. Perhaps the height of each column allows females to view the maximum number male candidates. In any case, individual females fly over to a swarming column and choose a mate, and the two then leave the column and fly off together mating. In the hokku, a mosquito column now seems to be taking shape above Issa in the eaves of his house. It covers most of the sky visible to Issa, but in one part of the forming column there aren't many mosquitoes yet, allowing him to fairly clearly see the very slender crescent moon -- a third-night waxing moon curving toward the left. Or perhaps Issa is walking somewhere and looks up at the sky. The many mosquito columns above him seem to cover the sky, but they leave one narrow section of the sky uncovered, and through it the thin crescent moon manages to shine. The single-column reading seems more powerful, since the mosquitoes are closer to Issa and easier to see as they fly across the moon.

This also seems to be the situation in the hokku placed two hokku later in Issa's diary:

mura no ka no oo-yoriai ya noki no tsuki

a big meeting
in the mosquito village --
moon in the eaves

Issa imagines a town meeting of a whole village of mosquitoes who have chosen to use his eaves as their gathering place before they collectively fly out to a field nearby. The rising moon must look rather fragmented yet dynamic when viewed through a swarm.

This short clip gives a rough idea of just how tall a mosquito column can be:
- source : www.youtube.com

upon inspection
it's covered with patches...
my mosquito net

a celebration--
this year's mosquitoes too
feast

even the horses
sleep in light green
mosquito nets!

from deep inside
the pretty flower...
thicket mosquito


kayatsurigusa 蚊帳吊草 "plant to hang in the mosquito net"
Cyperus microiria. Zypergras - kigo for late summer
Grows wild on abandoned fields. It has a strong fragrance against mosquitoes. 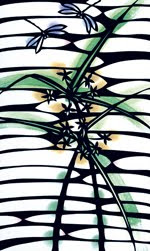 when lying down in the wilderness
we should also get some
mosquito net grass
Tr. Gabi Greve