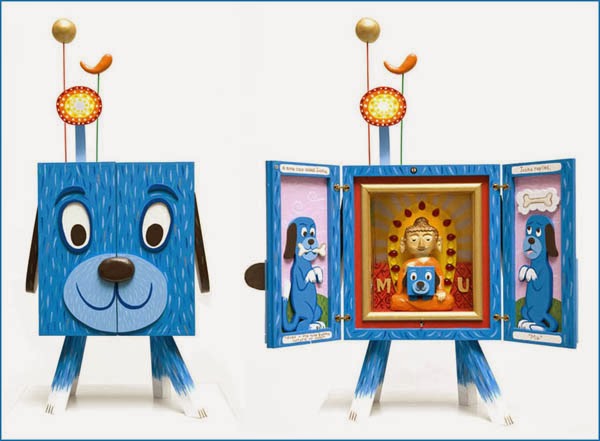 A monk asked Joshu,
"Do dogs have a Buddha-nature?"
Joshu answered, "Not."

Joshu's koan on the Buddha-nature of dogs, winter --

dogs
avoid it --
the snowy path

snowy field --
the path curves
by itself


the sumo wrestler
kindly stays away
from the snowy field


a difficult journey
also grows older
under the foot warmer


the path
to paradise approaches --
this coldness


you go out to have fun,
meet someone, end up
pounding rice cake dough


These eight hokku, in this order, appear as a series in Issa's diary for the intercalary or extra lunar 1st month in 1822, two months before Issa's third son Konzaburo was born in his hometown. The word "winter" in the headnote indicates that the eight hokku are about winter, not spring, the current season. The sequence is framed by two humorous hokku about a bush warbler nearby singing pompous and overly serious things.
The warbler, of course, suggests Issa himself.

Issa writes the hokku series on one of the most famous Zen koans, or difficult, suggestive questions given to students by Zen masters. Supported mainly by warriors in the medieval period, Zen became popular among commoners in the Edo period, and many books were published about it. Issa was not a Zen monk, but he could easily have read Zen koans in various printed editions. The koan about Joshu and dogs is the first koan in the popular Chinese koan anthology with commentary entitled The Gateless Barrier (in Japanese Mumonkan 無門関), compiled by the Chinese Chan monk Wumen Huikai (1183-1260). Since Issa may be using this collection, an English translation of its comments on Joshu's dog koan is given below. It is one of many translations that can be found online.

A monk asked Joshu,
"Has the dog the Buddha nature?"
Joshu replied, "Mu"

- Mumon's Comment:
For the pursuit of Zen, you must pass through the barriers (gates) set up by the Zen masters. To attain his mysterious awareness one must completely uproot all the normal workings of one's mind. If you do not pass through the barriers, nor uproot the normal workings of your mind, whatever you do and whatever you think is a tangle of ghost. Now what are the barriers? This one word "Mu" is the sole barrier. This is why it is called the Gateless Gate of Zen. The one who passes through this barrier shall meet with Joshu face to face and also see with the same eyes, hear with the same ears and walk together in the long train of the patriarchs. Wouldn't that be pleasant?

Would you like to pass through this barrier? Then concentrate your whole body, with its 360 bones and joints, and 84,000 hair follicles, into this question of what "Mu" is; day and night, without ceasing, hold it before you. It is neither nothingness, nor its relative "not" of "is" and "is not." It must be like gulping a hot iron ball that you can neither swallow nor spit out.

Then, all the useless knowledge you have diligently learned till now is thrown away. As a fruit ripening in season, your internality and externality spontaneously become one. As with a mute man who had had a dream, you know it for sure and yet cannot say it. Indeed your ego-shell suddenly is crushed, you can shake heaven and earth. Just as with getting ahold of a great sword of a general, when you meet Buddha you will kill Buddha. A master of Zen? You will kill him, too. As you stand on the brink of life and death, you are absolutely free. You can enter any world as if it were your own playground. How do you concentrate on this Mu? Pour every ounce of your entire energy into it and do not give up, then a torch of truth will illuminate the entire universe.

Has a dog the Buddha nature?
This is a matter of life and death.
If you wonder whether a dog has it or not,
You certainly lose your body and life!


Issa's eight hokku are his responses.
The sixth hokku suggests Issa maybe wondering if satori leads to enlightenment in the Pure Land, but Amida doesn't directly appear in any of the hokku, unless snow is taken to be an image of Amida's compassion. Many different interpretations are possible for each verse, and it seems worth mentioning that the standard Mahayana teaching is that all animals and even bushes and trees have sentience and Buddha-nature, that is, have the ability to become a buddha, so if Joshu's mu 無 answer is taken simply as "No!" or "Not!" this is rather shocking to the first-time reader, since it is an apparent denial of a central Buddhist doctrine. The eight hokku are not a formal renku sequence, but the subtle links between the various hokku in the series are also worth savoring. 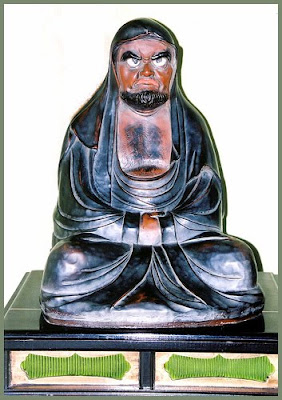 This hokku is from the 7th month (August) of 1820, when Issa was living in his hometown. The 7th month is the beginning of lunar autumn, and the year begins its gradual end. Issa is fifty-seven and has had a hard life, so his body is beginning to show signs of age, and he views the coming of autumn a bit wistfully. In contrast, the puppy knows nothing of the change of seasons yet and won't until large changes begin to occur outside. Issa draws on a proverb, shiranu ga hotoke, "unknowing, a Buddha," that is fairly similar to "Ignorance is bliss" to praise the puppy as a peaceful, happy Buddha for not being aware of time passing and its own mortality and to humorously criticize himself for worrying too much about time passing. There is another level, however.

Most schools of Buddhism in Japan, including the True Pure Land school to which Issa belonged, taught that all plants and animals had sentience and the ability to become a Buddha, and it was commonly believed that dogs, cats, and other animals had purer minds than humans and were not subject to the 108 bonnou or kleshas -- the negative mental states that cause so much human suffering. So Issa probably takes the peaceful breathing of the puppy to indicate a level of spiritual knowledge-within-ignorance deeper than what he is aware of in himself, even though he has more specialized knowledge about the passing of calendar time.