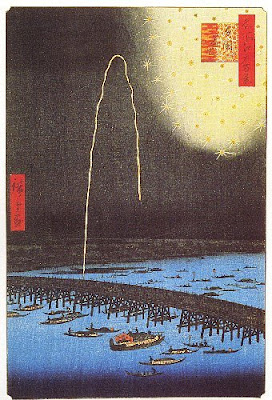 
The bridge Ryogokubashi was constructed after the Great Fire of Meireki 明暦の大火 in 1657, where many people died because they could not cross the river to safety.


- quote
Ryōgoku (両国) is a neighborhood in Sumida, Tokyo. It is surrounded by various neighborhoods in Sumida, Chūō, and Taitō wards: Yokoami, Midori, Chitose, Higashi Nihonbashi, and Yanagibashi.

In 1659, the Ryōgoku Bridge was built, spanning the Sumida River just upstream of its confluence with the Kanda River. Its name, meaning "two provinces," came from its joining Edo (the forerunner of Tokyo in Musashi Province) and Shimōsa Province. The neighborhood derived its name from that of the bridge.

The Forty-seven Ronin avenged the death of their lord, Asano Naganori, by breaking into the mansion of his enemy, Kira Yoshinaka, in 1703. Part of the mansion has been preserved in a public park in Ryōgoku.

It is regarded as the heartland of professional sumo. Most training stables or heya are based there. The first Ryōgoku Kokugikan 両国国技館 stadium for sumo was completed in 1909. The present one was built in 1985 in the Yokoami neighborhood north of Ryōgoku. Three of professional sumo's six annual official tournaments take place there.
© More in the WIKIPEDIA ! 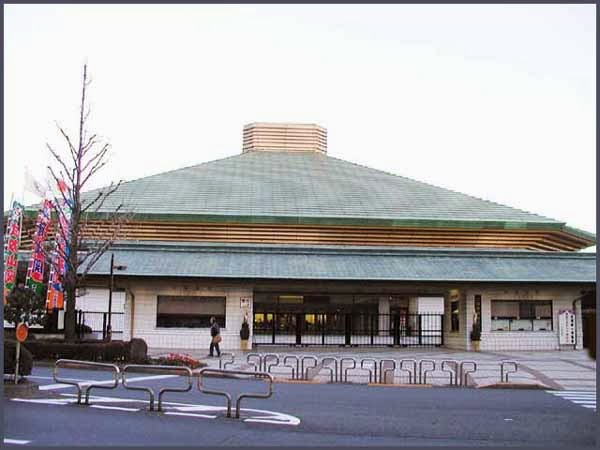 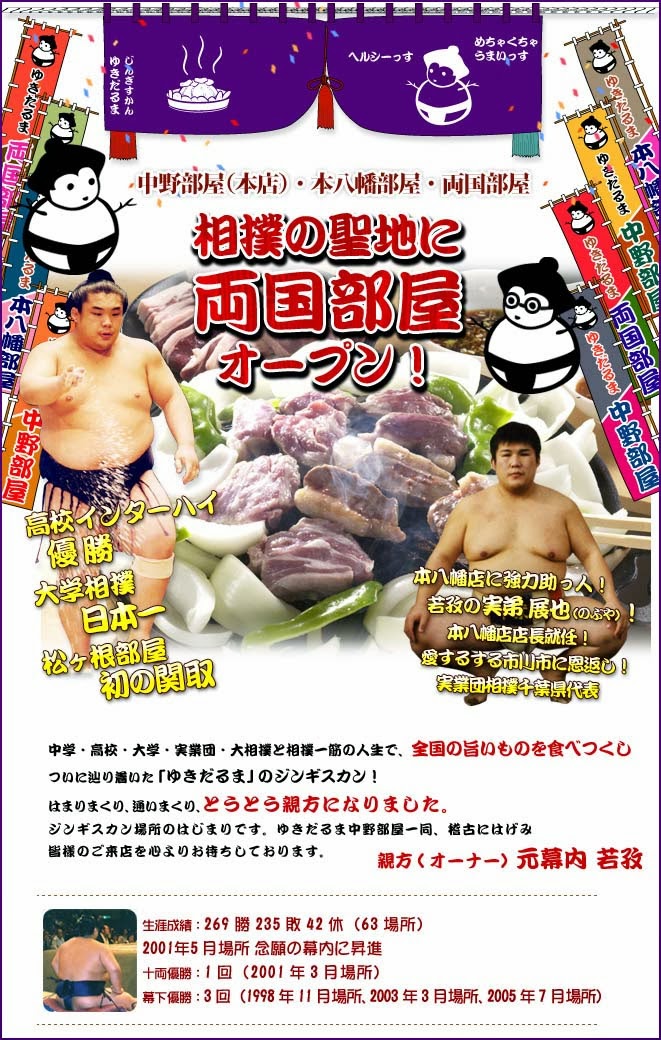 A trip on a boat for the fireworks cost about 23000 Yen.
The food served was dengaku tofu on skewers with miso paste, sushi, tenpura, mochi rice cakes, and of course sake and cold water. 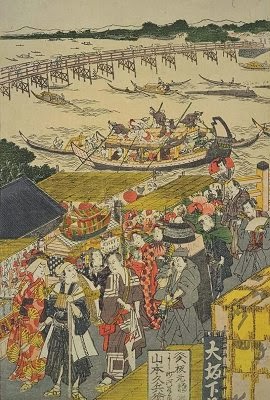 During the evening of the great firework display, all the tea stalls and eateries along the river were full of people.

kaen 火焔 flames
On the 13th day of the 7th lunar month in 1816, around midnight, a man was crossing the Ryogoku bridge when he saw a row of flames on the river. In its front and back were people on horses, clad in traditional court robes, brotecting the flames. Two months later there was a great storm and flooding, so this might have a warning of bad things coming. 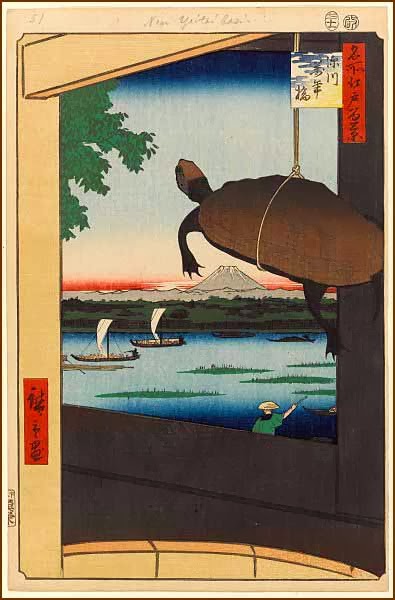 year's end --
how long must the turtles
hang in the air?
Tr. Chris Drake

This hokku was written on 12/27 (Jan. 24) in 1808, when Issa was in Edo and is about turtles being sold on Ryogoku Bridge, a large, busy bridge going over the Sumida River. Ceremonies for the release of living beings (Houjou-e) were held by both Buddhist temples and Shinto shrines, at some on a monthly basis and at some mainly in the first and eighth lunar months. One temple in Edo, Houshouji, was build mainly to carry out such ceremonies, in which turtles, eels, fish, birds, fireflies, and other animals living in captivity were released into their natural element. In addition individuals carried out personal acts of release accompanied by prayers throughout the year whenever they felt an impulse to do so. The turtles in this hokku are being sold by one or more turtle dealers to individuals who cross the large, crowded bridge in downtown Edo.

After buying a turtle (for about US $1), the customer will take the turtle to the banks of the Sumida River or to a pond in a temple or shrine and release it while saying a prayer for it. Most of the turtles are in a wooden tub, but the dealer hangs two or three turtles from strings tied to the railing to attract customers. There are probably fewer customers at the end of the year, although some people are no doubt planning to buy a turtle for their children to play with at New Year's, when it will be an auspicious symbol of a very long life, after which they plan to release the turtle at one of the big ceremonies in the first month. Issa lived near the bridge and no doubt has seen the hanging turtles before, but since there are fewer customers at the end of the year he wonders if it isn't cruel to keep hanging the turtles up even now. Of course it is cruel at any time of the year, but Issa's understatement makes the hokku more powerful. And the fact that it's the end of the year makes it very clear that turtles will hang in the air on the bridge year after year without end.

Issa is no doubt indignant about the hypocritical custom of catching turtles and other beings just so they can be sold and later released, and he himself surely sympathizes with the hanging turtles and feels he can understand to a certain extent how they must feel. During the lunar year that is now ending, Issa has been back to his hometown twice to negotiate with his half-brother about their inheritance. During the second visit he signed an agreement to share the house and fields, but his brother has remained cold to him and has kept asking for more time before they implement the agreement. Issa must feel as if he is suspended indefinitely between his hometown and Edo, and he no doubt wonders whether his brother will ever implement the agreement. Issa returned to Edo from his second visit to his hometown only ten days before he wrote this hokku, so his feeling of homelessness must be very strong. Using irony, Issa may be asking, Must we turtles hang in their air our whole lives, that is, as tradition has it, for ten thousand years?

The woodblock print by the print artist Hiroshige of a turtle for sale hanging in the air above a wooden tub on Mannen-bashi, or Ten Thousand Year Bridge, another large Edo bridge. Mt. Fuji can be seen far away in the west below the suspended turtle, which seems to soar above it. This may well be an ironic comment by Hiroshige.

Ryogoku Bridge--
even on a boat, people
drinking away the year

Ryôgoku Bridge is the oldest of the major bridges crossing the Sumida River in Edo (today's Tokyo). It links the provinces of Shimosa and Musashi, hence its name, which means, "Both Provinces."
According to Maruyama Kazuhiko, Ryôgoku was a famous east-west bridge where people would gather to enjoy the cool of evening. In this case, instead of pleasant cool air, the bitter cold of night stretches to the east and west.

on Ryogoku Bridge
in both directions...
the cold night
Tr. and Comment - David Lanoue

Ryogoku Bridge--
even in this moment of cool air
a lost child sign
Tr. David Lanoue

my life alone--
all the way to Ryogoku Bridge
for medicine
Tr. David Lanoue 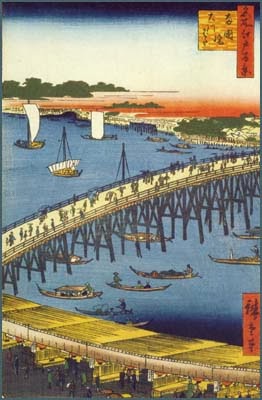 . Edo no hashi 江戸の橋 the bridges of Edo .