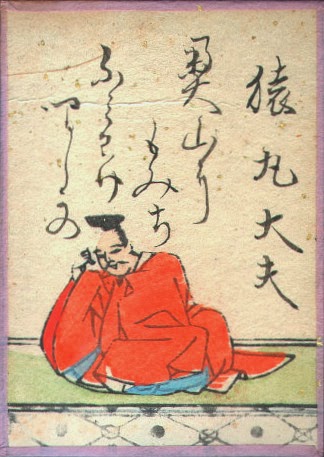 a waka poet in the early Heian period. He is a member of the Thirty Six Poetic Sages (三十六歌仙, sanjūrokkasen), but there are no detailed histories or legends about him. There is a possibility that there never was such a person. Some believe him to have been Prince Yamashiro no Ōe.
© More in the WIKIPEDIA !

Once Sarumaru Daiyu was hunting a white deer and came down all the way to Nikko. The Huge Mukade 大ムカデ from Nikko eats the children of the white deer, this deer mother had called the famous arrow shooter Sarumaru to help.
He put some spittle on his arrow and shot the mukade dead.
Even now if people want to kill a mudake, they use spittle.

This hokku is from the second month (March) of 1816, when Issa was living in his hometown. Issa writes the word monkey with the suffix "-maru" (also read "-maro"), a common suffix used in the names of men -- such as the waka poet Hitomaro -- from the ancient period on. In Issa's time it was a standard friendly term for a monkey. Even today, adult Japanese will often speak of a monkey or group of monkeys as saru-san, or "Mr./Ms. Monkey," as if the monkeys were honorary humans, a usage which is both respectful and intimate and neither elevates nor lowers the status of monkeys in relation to humans. The suffix -san is not as consistently used by adults for other non-human animals and continues the usage in Issa's time, when monkeys were addressed as equals in many contexts, as in this hokku. The use of "Mr. Monkey" is different from the use of "-dono," that is, Lord or Sir, which Issa uses in many hokku, since "-dono" is a metaphor based on hierarchical class society and often includes ironic or humorous overtones as well as respect.

In ancient Japanese myth the greatest of the earth gods is named Saruta-hiko, Monkey Field Man, and in traditional Japanese society monkeys were believed to be the messengers of mountain gods and able to move freely back and forth across the border between the invisible divine world and the visible everyday world as well as the border between the animal world and the human world.

One of the Thirty-Six Waka Poet Wizards in ancient Japan was named Sarumaru Dayuu, and his name "Great Priest of the Monkeys" (literally Great Monkey-Man Priest) indicates he was regarded as a powerful shaman or Shinto priest ("Dayuu") who prayed to various monkey gods. Nothing certain is known about him, and scholars believe his few remaining waka poems may have been written by a line of wandering priests or shamans using the same title, a title which indicates that "monkey-man" was a term of high respect in ancient Japan.
Later, in medieval Japan, a kind of shamanic drama known as Sarugaku, or "Monkey Music," developed into No drama.

In Issa's age, monkeys were sometimes the butt of jokes, but they were also regarded as intelligent and semi-divine, depending on the situation. In Issa's hokku, the monkey seems to be either a dancing monkey who travels with a trainer and gives roadside performances or a monkey living near a shrine at which monkeys are worshiped, since he seems to be familiar with humans and with a pipe someone has loaned him. The pipe has a long bamboo stem with a metal mouthpiece and bowl, and the monkey seems to know what to do with it, since he holds it properly in his mouth between his teeth.

Issa doesn't say whether the pipe is lit, but it might be, since in Issa's day many people liked to drink and celebrate as they viewed the plum blossoms, which were regarded as second only to cherry blossoms in terms of beauty. Perhaps the monkey is resting after a performance or a festival, and the trainer is thanking him by giving him a few puffs, or perhaps by now the monkey has his own pipe. There might be a submerged image here of the long pipe as an object suggesting nearly verbal yet still nonverbal communication between monkeys and humans, with the pipe extending like semi-words from the monkey's mouth. 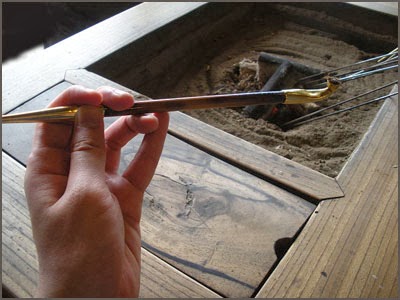 This shows the kind of pipe the monkey has in his mouth.

The name refers to the performer clan of
Kanze Dayuu 観世大夫 Kanze Dayu, who had his residence in this area. He moved here in 1659, after the construction of waterways along the river Kandagawa claimed his former residence.
Saru 猿 was called ETE エテ by the normal people, and the district was also called
etegaku choo エテガク丁 Etegaku cho.
sarugaku is an old form of the Noh theater.
In the Edo period, there were many residences of the Samurai, along the road 錦華通り Nishikihanadori, 表猿楽丁 Omote Sarugakucho and 裏猿楽丁 Ura Sarugakcho.

In the Edo period, there used to be many theaters to perform Sarugaki Noh.

Sarugaku 猿楽 "Monkey music
The Imakumano Shrine has close linkes to the earliest form of Noh called Sarugaku (猿楽). The sarugaku Noh troupe Yuzaki, led by Kan’ami, performed in 1374 before the young shogun Ashikaga Yoshimitsu (足利 義満). The success of this one performance and the resultant Shogunal patronage lifted the art form permanently out of the mists of its plebeian past.
The Birth Place of Noh: 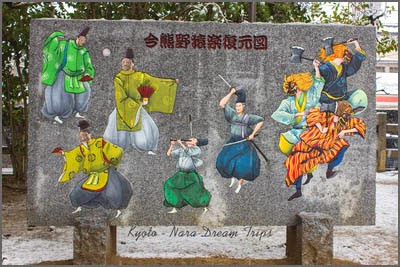 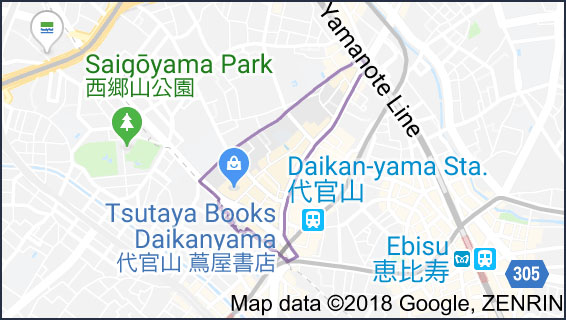 There is another one in
東京都渋谷区 Shibuya ward.

There used to be a kofun 古墳 mound called 猿楽塚 Sarugakuzuka.
From the mound there was a wide view over the area, it was also called 斥候（ものみ）塚 / 我苦塚 Monomizuka.
29-9 猿楽町 渋谷区
There used to be two mounds and the 鎌倉街道 Kamakura Kaido highway run right between them. 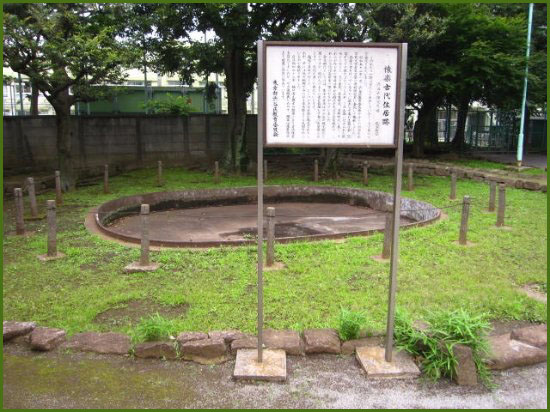 - quote -
Monkeying around in Sarugakucho
Sarugakucho — which loosely translates as “monkey fun town” — is a hot spot near Daikanyama Station in Shibuya, Tokyo.
As a place to hang out, this area sets the bar pretty high: Its backstreets are a zoo of uber-cute boutiques offering exclusive jeans, aromatic drip coffee made with gourmet beans, wee French restaurants and a smattering of traditional goods such as indigo-dyed clothing and souvenir tenugui (cotton towels). It’s all great fun, but please note: the area has been so over-blogged (without permission, or precision, apparently) that many shop owners have posted “No photos” notices in their windows — so ask before you shoot, and don’t make a monkey of yourself.
... Kyu Yamate-dori, the main avenue through southwest Sarugakucho. Located here is the Tokyo campus of world-famous cooking school, Le Cordon Bleu, which has a cafe, and which puts fin to la resistance.
... Kyu Asakura-Ke Jutaku (the former home of the 朝倉家 Asakura family).
Peeking in the front gate, I can instantly tell the ¥100 entrance fee is going to be coin well spent. Chatting with the attendant, I learn that Sarugakucho was once the location of two burial mounds from sixth or seventh century, and that throughout the Edo Period (1603-1868) the Kamakura Kaido (highway from Edo —modern-day Tokyo — to Kamakura) ran between the two mounds. The Asakura family leveled one of the mounds to build their estate.
The residence of Torajiro Asakura (1871-1944), the former chairman of the Tokyo Prefectural Assembly and Shibuya Ward Office, is perched majestically on the area’s natural hillside. Designated an Important Cultural Property overseen by the Shibuya Ward Office, the estate’s impressive roof tiles are topped by the Asakura family mon (crest) of a flowering quince. A nod to foreign influences — often the hallmark of Taisho Era (1912-26) design — is evident in the delicate glass windows on one side.
- source : Kit Nagamura 2015 -