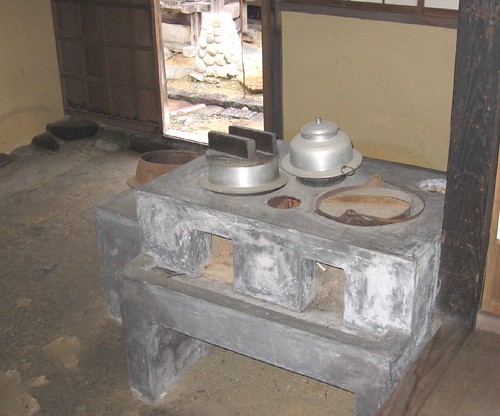 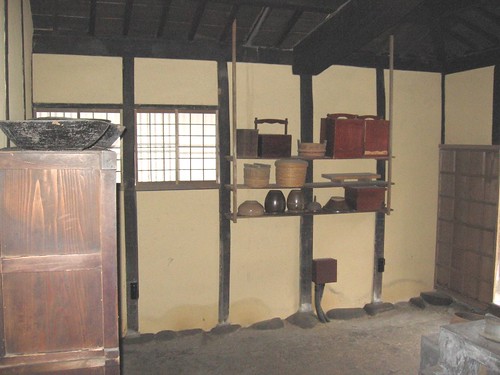 - - - kitchen, from my visit to Katsuyama, Okayama

. Kitchen (daidokoro) and hearth (kamado) .
My first introduction, with haiku from Matsuo Basho and others

- quote - JAANUS
1 Believed to be an abbreviated form of *daibandokoro 台盤所. The most common Japanese term for kitchen. From at least the Heian period, the term was used in the emperor's residential compound, Dairi 内裏, of the imperial palace and in the mansions of the aristocracy to refer to a room used for the final stages of food preparation and serving. By the medieval period the term was used in warrior houses.

2 From the 13c-19c, a building in upper class residences, used to prepare and cook food. Typically, it included an earth-floored area *doma 土間, equipped with a cooking range *kamado 竈, and sometimes a well *ido 井戸, and sink *nagashi 流し. In addition it incorporated a suite of raised floor rooms, some of which were equipped with an open hearth *irori 囲炉裏, where more advanced stages of food preparation and serving took place.

There was generally a smoke louvre *kemuridashi 煙出, in the roof. The building also contained storage space for food and utensils, and particularly in the medieval period, it is believed to have included accommodation for servants and lower members of the household. In large residences, such as the baronial mansions, daimyou yashiki 大名屋敷, of the Edo period, the main kitchen was often divided into two: a lower kitchen *shimodaidokoro 下台所, and an upper kitchen *kamidaidokoro 上台所. Alternative medieval terms for the upper class daidokoro include *mizushidokoro 御厨子所, zendokoro 膳所, and zenbu 膳部. In the Edo period the upper kitchen might alternatively be referred to as *kiyodokoro 清所 or *ryouri-no-ma 料理の間, and the lower kitchen as oodaidokoro 大台所.

3 In vernacular houses *minka 民家 of the Edo period daidokoro was: a term for the earth-floored area doma, in parts of Tokyo, Saitama, Kanagawa, Fukushima and Iwate prefectures: a cooking area in the rear part of the earth-floored area in houses with their entrance on the non-gabled side *hirairi 平入, in the Izumo region of Shimane prefecture ; a timber platform projecting from the raised living area, kyoshitsubu 居室部, into the earth-floored area in parts of Aomori, Yamagata Fukushima and Nagano prefectures and throughtout Hokuriku 北陸. The latter generally had an open hearth irori, cut into the floor and was used for food preparation, dining, and as a place for sedentary work, especially in winter.

4 In vernacular houses minka, of the Edo period in many districts, a term for the main living room *hiroma 広間, which extended the full cross-sectional depth of the building from front to back, in *hiromagata 広間型 houses. The boarded floor was often exposed and there was usually an open hearth irori. It served as a living and dining space and some cooking was done in the irori.

5 In vernacular houses minka of the Edo period with a 4-room or 6-room raised living area kyoshitsubu 居室部, the room in the rear range adjacent to the earth-floored area doma. It was used as a family parlor, dining room and for the preparation of food. It might be open to the doma or divided from it by sliding panels. In certain districts it contained an open hearth irori, though rarely in the Kinki 近畿 region, where the four-room house first emerged as a common minka type. It could also be a space toward the rear of the main living room hiroma, in kobeyatsuki hiromagata 小部屋付広間型 houses.

6 In urban vernacular houses *machiya 町家 of the Edo period, especially in the Kyoto area and regions influenced by it, a room to the rear of the shop *mise 店, adjacent to the earth-floored area doma, used for dining and the preparation of food and as a family parlor. It was also often referred to as the naka-no-ma 中の間. In all regions, daidokoro was often abbreviated to daidoko 台どこ and in certain areas to dedoko でどこ. Daidokoro is sometimes written 大所.
- source : JAANUS 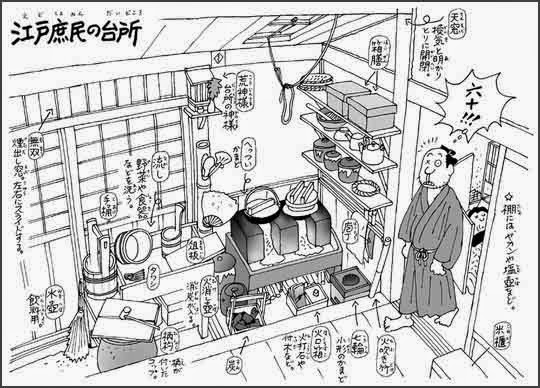 長屋の台所風景 Kitchen of a nagaya living quarter in Edo

naka no ma, naka-no-ma 中の間 kitchen of a town house 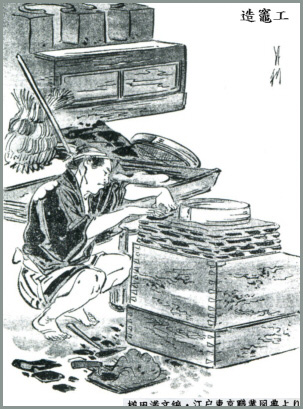 - quote -
By the late Edo period (1615-1867), some households had a variety of kamado:
kamado for use in a raised floor space rather than the doma;
small portable kamado (this was also the commonest type in cramped urban tenements;
a large one for preparing fodder for domestic animals; and often
a special one for use only on festive occasions and for preparing rice cakes.
The symbolic significance of the kamado was in proportion to its functional importance as a cooking appliance and adjunct of the hearth.
Its tutelary spirit, kamadogami, was one of the principal household deities, revered as provider of the means to cook and feared as a potential cause of conflagration.
- source : nakedwhiz.com/kamadotheword -

For fear of fire, many homes in a Nagaya living quarter in Edo did not have a stove. Some kitchens did not even have a knife. The vegetables were torn by hand, the Tofu was deliverd as it was eaten and the fish came cut by the fish vendor.
The hearth-making craftsmen were a group in itself with special skills according to the type of hearth to be made.
Homes in Kyoto usually had three "mouths" 三つ口, some even nine 九つ口.
The hetsui hearth of Edo was built with the back to the doma 土間 entrance hall, so the wife could see the living room. Most hearths were coverd with a black coating.

This was the job of a professional
. shakan, sakan 左官 plasterer, stucco master .

The kamado (also called hettsui へっつい in Edo) was used every day to prepare the meals.
Usually it had two openings to fire up separately.
To put new plaster earth around the hearth as a fire protection was usually done as one of the preparations for the New Year. 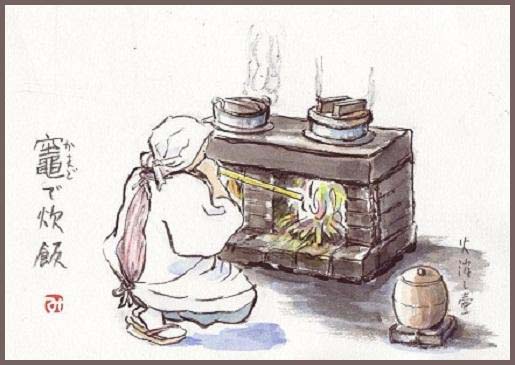 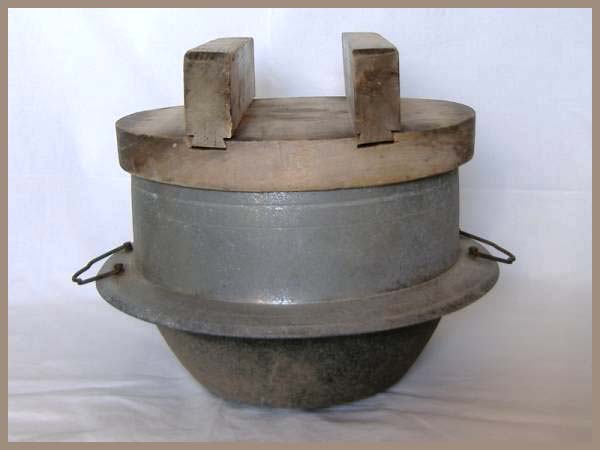 kamabutashi, kamabuta-shi 釜蓋師 making a lid for the iron pot
釜蓋職人
Craftsmen who made these wooden lids made also many other wooden tools for a home and kitchen, for example the wooden cutting boards.
The lids had to fit well to make sure no steam was coming out of the pot.
The wood was about 3 cm thick.

. kamabuta tsuitachi 釜蓋朔日 opening the chauldron on the first day .
- kigo for early autumn -
On the first day of the seventh lunar month (now August 1) the chauldron of hell was opened to let the souls out for their visit to the family graves.
From this day on, the Urabon ceremonies were started. 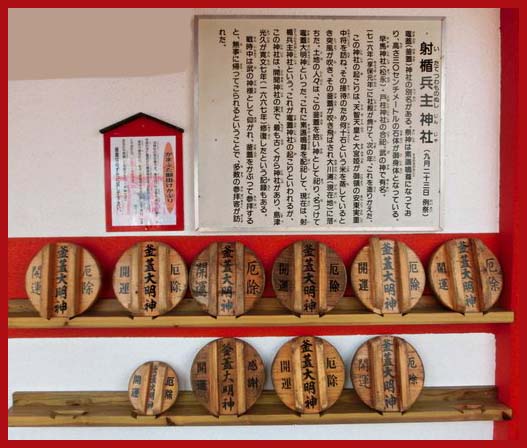 The deity of this shrine has long been venerated by the Samurai. To pray for victory before a battle, they came here with an old lid or kettle and offered it with the wish that bullets from the enemy gun would not hit them. So ever more Samurai visited here.
Now people also pray for good luck and luck with a new business, even victory in sports.
They put a lid on their head and walk from the entrance Torii gate of the Shrine building. If the lid does not fall down, their wish will be granted . . . 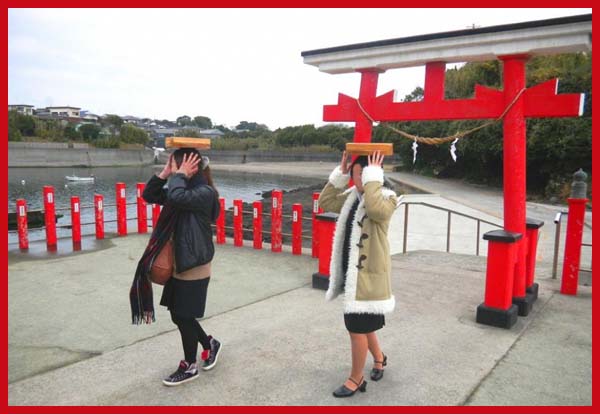 . kigo related to the kitchen .


猫の妻竃の崩れより通ひけり
. neko no tsuma hetsui no kuzure yori kayoi-keri .
and more kitchen haiku by Matsuo Basho and others 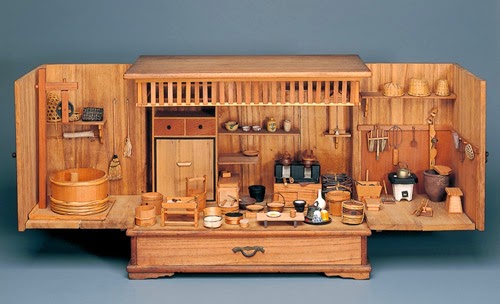 If someone places a knife on the kama 竈 hearth, Ido no Kamisama 井戸の神様 begins to cry.
.
https://japanshrinestemples.blogspot.com/2019/06/ido-no-kami-well-legends.html
.