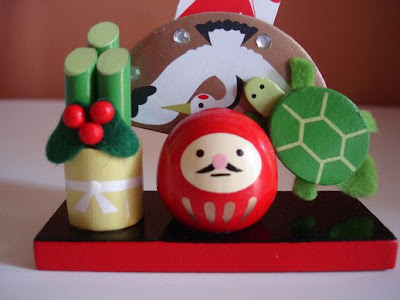 The beginning of a kasen renku written on lunar New Year's Day in 1827:

1
New Year's Day --
we, too, bloom in our
blossoming world


2
this our guest book
for all three to sign


4
sideways I swing up
onto the horse


These are the the first four verses of a 36-verse kasen renku written by Issa, his follower Baijin, and Baijin's father Ranchou, also a haikai poet. Issa was staying with them in Nakano, a few miles from his hometown, at lunar New Year's in 1827 -- what turned out to be the last lunar year of Issa's life. Baijin, head of a firm that produced soy sauce and soybean paste, was one of Issa's closest followers in his final years and helped publish a collection of his hokku after his death.

As the visitor, Issa writes the hokku. In it he expresses his warm, ebullient regards and his deep friendship with Baijin. He mentions blossoms, and since this is New Year's, before the cherries have begun to bloom, he must be referring to the friendship and love of haikai that is blossoming and bringing all three people together. And Issa goes farther. He feels they are also part of the larger wave of blossoming humanity that is now enjoying New Year's celebrations and good feelings across the land or perhaps all over the world. Issa writes "blossoming world," but the world (shaba) here refers mainly to the world of humans, to society or humanity.

The word shaba began as a Buddhist term for the samsaric world of imperfect and delusion-filled human life as opposed to other modes of existence, such as animals, fierce shura demons, or hungry ghosts. It is the world into which Buddhas and bodhisattvas are born and teach and the world in which human beings are able to achieve enlightenment and freedom from suffering. Gradually the word also became an ordinary secular Japanese word meaning this world, the human world, the everyday world, this life, human relations, society, the material world, and it came to resemble the phrase "floating world," which had both positive and negative meanings. When Issa writes about suffering in the human world he often uses ku no shaba, the world of suffering, and when he wants to praise the world, he uses a phrase like the blossoming world, as he does here.

Issa's reference in the hokku to the world being filled with blossoming people at New Year's is an expression of praise for his hosts and for all the people in the human world who are trying to find happiness at New Year's. It is not related, however, to the separate concept of the "degenerate latter days of the Dharma" (masse, mappou). This was a belief that became widespread in the medieval period in Japan according to which Buddhism had entered its third and most degenerate age after beginning with the appearance of Buddha in the Age of Correct Dharma, followed by the Age of Semblance Dharma. In the contemporary degenerate age, it was believed, monks and ordinary people were too weak and confused to be able to follow Buddha's original teachings, and society had become thoroughly corrupt. Honen and Shinran, who founded the two main schools of Pure Land Buddhism in Japan, used the doctrine of the age of degenerate Dharma above all as justification for founding their new schools.

The high-ranking clerics of the older Tendai school declared chanting the Buddha's name to be a heresy and exiled both of them, so Honen and Shinran needed the degenerate age doctrine in order to establish their new, simpler schools of Buddhism for ordinary commoners. According to their argument, ordinary humans, including farmers and fishers, were too weak to understand sutras and to do difficult meditation or rituals, and therefore deep, sincere belief in Amida Buddha, the chanting of Buddha's name, and the simplification of Buddhism itself were all necessary in order to give ordinary people access to salvation. Shinran even allowed priests to marry and declared chanting Amida Buddha's name was not necessary but only an expression of thanks. Issa's age was more peaceful and more world-affirming than was Shinran's, and the degenerate age doctrine was mainly quoted not to condemn the contemporary world but to state the basic reason why the Pure Land schools were necessary. Issa's hokku, however, does not refer to degeneration but to the ordinary concept of the impure samsaric human world in general, a world that was believed, following Book 16 of the Lotus Sutra, to be non-separate from and thus overlapped with the Pure Land. Issa seems to imply that at New Year's people's hearts and minds blossom in a way that is reminiscent of Amida Buddha's love, and the world may thus suggest the temporary blossoming of the Pure Land itself in this world.

In verse 2, the wakiku, Baijin responds to Issa's friendly praise and says that all three members writing the renku have signed the visitor's book -- the book of the world. New Year's Day was a busy day, and people went around to other people's homes for brief visits during which they offered their best regards to their friends, relatives, and neighbors and signed the visitor's book at each house they visited. In Baijin's version, the three poets give their best regards not only to each other but to the whole world and to everyone alive. In the verse the visitor's book seems to be the thick paper on which the kasen is being written, which the poets sign (tsukeru) by linking (tsukeru) verses.

In verse 3, the daisan, Ranchou evokes sake drunk to greet a visitor to his house. The sake has been heated and is still too hot to drink, but a fresh spring breeze from the east blows on the sake and cols it until the people are able to toast each other. The verse says that it seems as if the breeze has kindly blown into the house in order to cool the sake for the humans.

In verse 4, the yonku-me, Issa seems to be making a scent link. The sake has been drunk in order to say farewell to someone. After exchanging cups of warm sake, the traveler seems to put one foot in a stirrup and then swings his body upward and sideways over the horse in order to sit on it. His swinging motion is very light, according to the language used, so perhaps, helped by the sake, he feels as if the wind is helping him up onto the horse. From this upward swinging motion begin all the wide-ranging images that fill the kasen, which Issa literally imagines as a journey. It seems possible that Issa's image of leaping sideways up onto a horse is a reference to one of Shinran's most important teachings called ouchou 横超, to pass or cross over sideways -- what The Collected Works of Shinran calls "to transcend crosswise." Simply put, this means that it is possible for some believers, if their trust in and reliance on Amida is total and complete, to rapidly pass over all minor stages and enter directly into the Pure Land with Amida's help. Is the rider in verse 4 setting out for the Pure Land? If so, then the renku paper itself is a sudden opening onto the Pure Land that keeps blossoming with each new verse. There are no commentaries on this kasen, however, and this remains just an hypothesis.


. shaba 娑婆 / しゃば / シャバ this world of Samsara .
more haiku by Issa on this subject