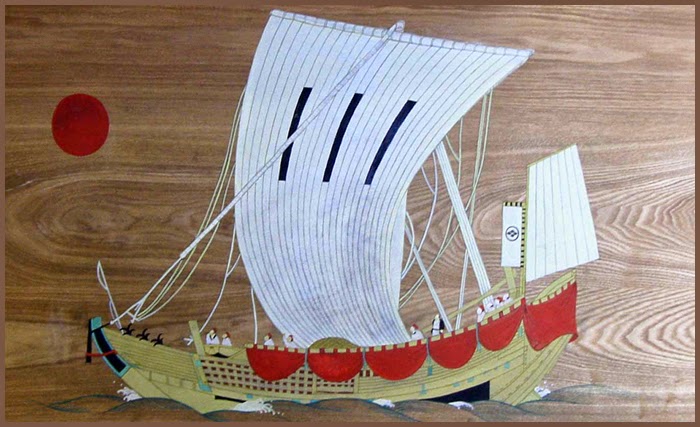 - quote
The Kitamaebune (北前船 literally northern-bound ship)
was a shipping route (and also the ships involved) in Japan from the Edo to the Meiji periods. The route went from Osaka through the Seto Inland Sea and the Kanmon Straits to ports in Hokuriku on the Sea of Japan and later to Hokkaidō.

The Kaga Domain, which sold approximately 70,000 koku of rice every year in Osaka, succeeded in sending 100 koku by boat through this route in 1639. The Tokugawa Shogunate also received rice from Dewa Province through merchant Kawamura Zuiken in 1672, but it is thought to be a response from these ships. Japanese ships at the time normally could only make one trip per year, but with the arrival of Western schooners in the Meiji Period, ships were able to make up to four trips annually. 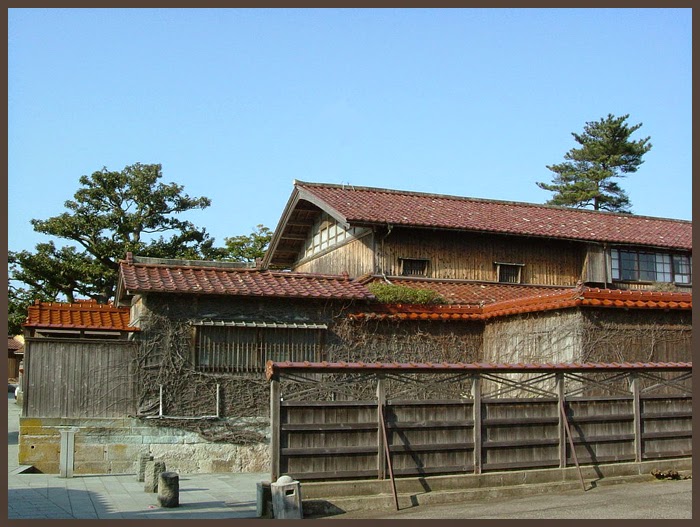 A house of kitamaebune sailors, now a museum in Kaga, Ishikawa.

However, the Meiji Restoration also brought the end of the feudal system and the introduction of the telegraph, getting rid of gaps between regional markets and making it difficult for the shipping routes to make large profits. The national construction of railroads further led to the end of the Kitamaebune.

Currently, the Shin-Nihonkai Ferry is sometimes called the modern Kitamaebune, with stops along the old route at Maizuru, Niigata, Akita, Tomakomai, Hokkaidō, and Otaru.
- source : wikipedia 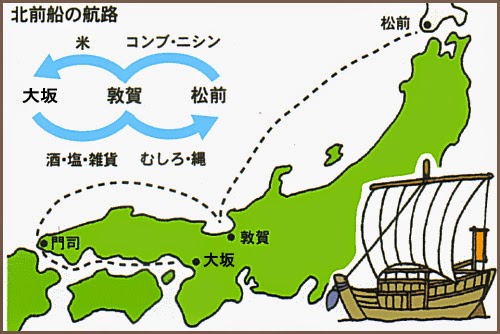 - quote
The Kitamaebune is a shipping route mainly through the Sea of Japan from late Edo Period to the Meiji Period. The ships spent a year to sail a round-trip between Osaka and Hokkaido and transported a great amount of fortune and culture. The facility itself was built by a former owner of a Kitamaebune Ship named Chohei Sakatani in 1878 (Meiji 11), and is registered as one of the national tangible cultural assets.
The beams and pillars inside the Museum were constructed with expensive materials transported from different regions, and with many layers of lacquer painted on them, these beams and pillars still have the lust and shine even after 120 years. 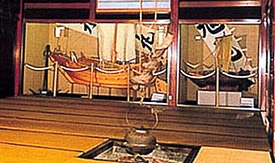 Inside the Museum, there are various exhibitions on everything about the Kitamaebune Ships including navigating tools, ship cabinets, a 20:1 model and other information on the lives as a sailor on the Ships.
- source : www.hot-ishikawa.jp


. Matsumae in Hokkaido 松前 .
Matsumae, one of the oldest port towns in Hokkaido, used to be busy during the summer months in the Edo period for fishing.
The name Matsumae at that time was almost identical with the old name of Ezo / Hokkaido.


The Matsumae clan (松前藩, Matsumae-han)
was a Japanese clan which was granted the area around Matsumae, Hokkaidō as a march fief in 1590 by Toyotomi Hideyoshi, and charged with defending it, and by extension all of Japan, from the Ainu 'barbarians' to the north.

. Takadaya Kahei 高田屋嘉兵衛 (1769 - 1827) .
In 1795, he constructed a ship named Shinetsu-maru with a displacement of 417 tons in Dewa (Yamagata and Akita Prefectures) and captained it. The following year he opened trading stores with the name of Takadaya in Hyogotsu and Hakodate, and started selling goods he transported between Ezo and the Osaka area.

During the Edo period, sailors on the Northern-bound trade ships (Kitamaebune 北前舟) came here to pray for safety on sea. 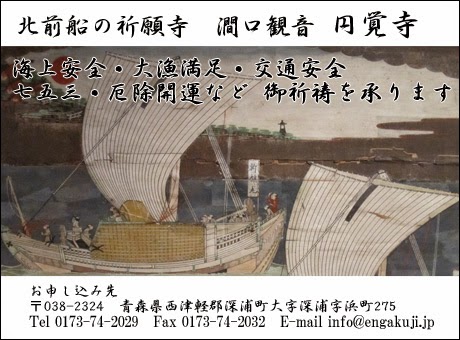 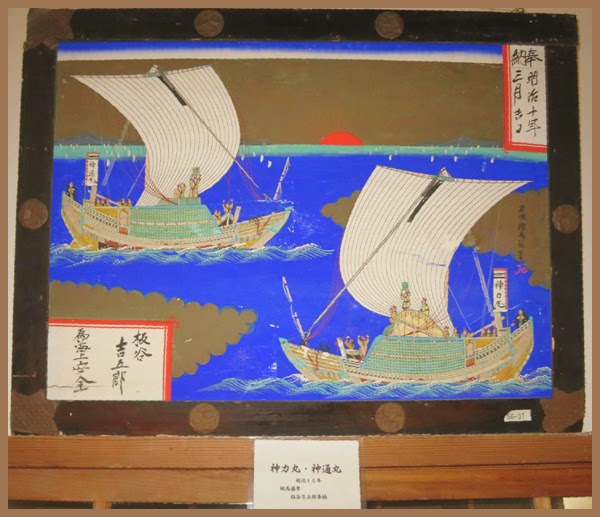 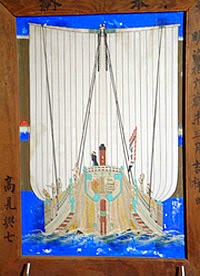 CLICK for more ema 絵馬  votive tablets with Kitamaebune in temples and shrines along the road.

High-quality konbu are softened in vinegar and then shredded into very thin pieces.
They can be eaten in sumashi soup or used for aemono dressing, placed into onigiri rice balls or eaten like this with a bit of additional flavored vinegar or sanbaizu vinegar.

Most oboro come from Tsuruga 敦賀, Fukui. There was even an old road connectiong Tsuruga with Kyoto to transport the freshly shredded oboro konbu (oboro kaidoo おぼろ街道).
The oboro must be shredded by hand, which is quite a delicate job.
Tesuki Oboro Konbu (hand-sliced tangle seaweed) is produced after dampening it with vinegar and soften it.Today, 85% of the Japanese hand-sliced silk-like tangle kombu is produced in Tsuruga.
This tradition dates back to the Kitamaebune ships, which brought dried konbu from Hokkaido.
http://www.fukui-c.ed.jp/~cdb/shoku/konbu/index.html

. WASHOKU - denbu 田麩 and oboro shredded fish .
For food, we have oboro of fish, oboro of konbu seaweed, oborodoofu of tofu and others.


Tsuruga 敦賀, a traditional harbour where the ships from Hokkaido (Kitamaebune 北前船) used to stop over and unload things, mostly marine products, that were transported to Kyoto by land via the Shiotsu Kaido 塩津街道 along the lake Biwako, linking to Kohoku Shiotsu in Omi. (Kohoku is Northern Shiga region.)
Tsuruga was also the endpoint of the road Tango Kaidoo 丹後街道 Tango Kaido. 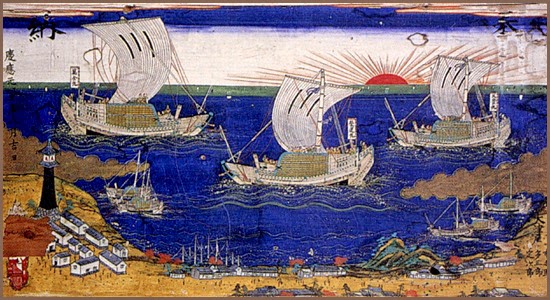 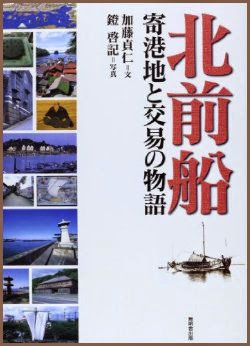 - quote
Back in Edo era not only “Kitamae-bune” route but also other sea routes flourished.
snip
Japanese traditional ships such as “Kitamae-bune” had some different points than western-styled ships.
Japanese ships didn’t have their keels, that western ships had.
Ships without keels were relatively weak, and they easily got broken when they were confronted with strong waves.
Another different point was that Japanese ships had only one mast per a body. Western ships usually had two or three masts per a body, that enabled ships to raise many sails upon the bodies and take advantage of the power of winds efficiently. On the other hand a Japanese traditional ship raised only one large sail with one high mast in order to let it go as rapidly as possible. But that lost a Japanese ship’s balance and made it vulnerable to heavy winds
and waves.
All in all, Japanese traditional ships had a higher risk to be wrecked or capsized than western ones.

Why had Japanese traditional ships kept such disadvantages?
Because Tokugawa Shogunate didn’t permit building any advanced ships and kept them old-fashioned and unable to sail a big travel.
Edo government closed Japan’s borders and prohibited any immigrations and emigrations across the sea.
So they banned residents to build any ships that could sail over the oceans.
As a result Japanese traditional ships lacked a structure for long travels – strength and stability of their bodies to defy wild waves in oceans.
Against such disadvantages and risks, though, Japanese sailors carried a vast amount of loads across Japan to meet an increasing demand of Japanese economy.

“Kitamae-bune” carried various kinds of loads from contemporary Hokkaido and Aomori prefecture , via many ports along Sea of Japan, to Osaka.
Osaka in Edo era was the largest market for trading goods made in all places of Japan.
Products from rice crops to salt and dried seafood were transported into Osaka, wholesaled there and distributed to all over Japan.
And the Kinki region (近畿地方) including Osaka was once the most advanced manufacturing center in Edo Japan.
Industry such as brewery, oil processing, and shipbuilding were conspicuous in Kinki region.
Producers along Sea of Japan sent their goods to Osaka to sell them, and bought processed goods from Kinki region. To link them “Kitamae-bune” took their voyages and carried goods frequently. 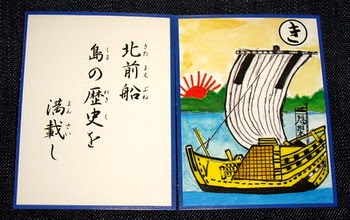 Kitamae sailboat -
it carries the history
of this island
Tr. Gabi Greve

South Wind
for the Matsumae Sailboat
with a nun on board . . . 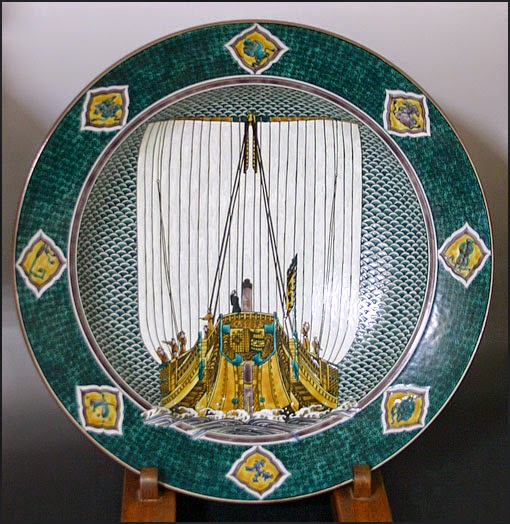 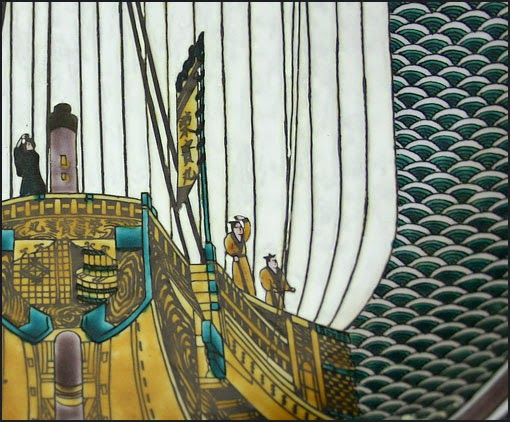