Until then most of the tax payments had been the rice produced by the farmers of a domaine.
With natural disasters, drought and the great famine Tanuma turend to the merchants for more tax money and licensing fees.
He also introduced tax pamyemnt like
myoogakin 冥加金 and
unjookin 運上金 transportation tax, 長崎運上 related to Nagasaki since 1699

But all this in the end only leads to bribes and more bribes of those who have accumulated riches. 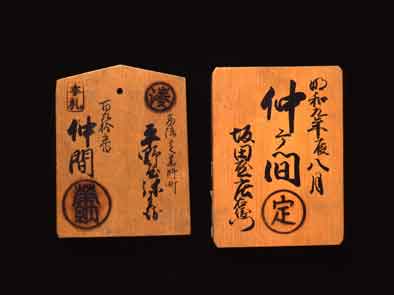 - quote
... merchant guilds in Edo period Japan, which developed out of the basic merchants' associations known as nakama. The kabunakama were entrusted by the shogunate to manage their respective trades, and were allowed to enjoy a monopoly in their given field.

Some kabunakama, known as gomen-kabu, were even allowed to set prices and manage the operations of other nakama. Though the shogunate originally opposed monopolies, they eventually gave in to the increasing numbers and organization of merchants' associations, and decided to make an attempt to control them by officially licensing them. In 1721, the government began to authorize individual nakama to become kabunakama (kabu refers to "shares", though these were themselves not tradeable), and to oversee the organization and trade within given fields. The goal was to encourage cooperation, not competition, and always to work towards the goal of advancing the economy. It is said that these groups became quite social and merchants' moral codes thus developed to a significant degree. Those who were not following ethical market behavior, behaving uncooperatively, or encouraging competition, were shunned by their kabunakama comrades, and likely by the larger market community.

The structure was originally created to replace older guilds, known as za 座, and by 1785, there were over one hundred kabunakama in Osaka alone, including a number granted special privileges by the shogunate, but taxed heavily in exchange. Some of these were groups entrusted and authorized to control the nation's trade in precious metals, iron, and copper.

In the 1840s, rōjū grand chancellor Mizuno Tadakuni attempted to do away with the kabunakama, in order to combat monopolies, but this and many of his other reforms were resisted so strongly by the merchants of Osaka (and others) that he was forced to abandon his efforts.
The kabunakama were all dissolved, however, in 1870 as the economy modernized and new forms of business associations appeared.
- source : wikipedia


- quote -
The za (座 lit. 'seat' or 'pitch')
were one of the primary types of trade guilds in feudal Japan.
They grew out of protective cooperation between merchants and temples and shrines; merchants would travel and transport goods in groups, for protection from bandits and the vacillating whims of samurai and daimyo (feudal lords). They would also enter into arrangements with temples and shrines to sell their goods on a pitch or platform in the temple's (or shrine's) grounds, placing themselves under the auspices and protection of the temple or shrine. The word za, meaning seat, pitch, or platform, was thus applied to the guilds. The name may have also come, more simply, from the idea of merchants within a guild or association sharing a seat or platform in the marketplace.
. . . The earliest za
came into being in the 12th century, consisting not only of trade guilds, but also guilds of performers and entertainers. Even today, performers of kabuki and noh are in associations called za (see Kabuki-za).
The za trade guilds appeared as a major force in the 14th century, and lasted in their original forms through the end of the 16th, when other guilds and trade organizations arose and subsumed the za.
Za in the Muromachi period
Za in the Sengoku and Edo periods
"free" markets and guilds, known respectively as rakuichi (楽市) and rakuza (楽座).
... One of the new types of organization was called nakama (仲間), or kabunakama (株仲間) when they were authorized by the Shogun.
... Another type of trade group, called toiya (or tonya in Edo), served as wholesale merchants, focusing primarily on shipping and warehousing. At this time, Osaka came into its own as a great port, and eclipsed Kyoto as the nation's primary center of trade, contributing further to the downfall of the original za.
- continue reading
- source : wikipedia -

- quote -
Ton'ya 問屋 trade brokers
called toiya outside of Edo, were trade brokers in Japan, primarily wholesalers, warehouse managers, and shipment managers; the term applies equally to the traders themselves and to their shops or warehouses. First appearing as early as the 12th century, ton'ya came to serve a crucial role in the economy of the Edo period (1603-1867).
The earliest record of a toi-otoko (問男) may be one from 1175, in which a number of Court officials hire an outside boatsman to transport them down the Yodo River. As he was not a servant or agent of the Court, or any manor, but rather a man hired out privately, this represents the emergence of the sorts of private enterprises which would come to dominate the economy centuries later.
The ton'ya of the Edo period were little different, essentially acting as independent agents for specific elements of the domestic trade; most often they were shippers, but many were local handlers, middlemen, or warehousers. They would be hired by a firm (a merchant, a shop, etc.) which operated out of one of the big cities to manage or handle the firm's goods in some other portion of the country. Wholesale freight shippers operating out of Osaka, transporting goods to Edo, numbered at least 24 in 1700, and a great many "guilds" existed specializing in the handling of individual types of goods, such as cotton, sugar, or paper. In addition, there were groups such as the Satsuma Tonya and the Matsumae clan Tonya, who specialized in the handling and transportation of goods within two of Japan's four great "gates" to the outside world; Matsumae, in Hokkaidō, governed the trade with the Ainu and Imperial Russia, while Satsuma, in Kyūshū, controlled trade with the Ryūkyū Kingdom and, through them, trade with Qing China.
Between the ton'ya and the numerous other types of groups in Osaka and Edo, including kabunakama, rakuza, and rice brokers (komedonya), Japan's primary urban commercial centers were extremely organized and powerful by the middle of the Edo period. Most of these groups would dissolve or evolve into something else entirely by the end of the Edo period, but they served an important role in facilitating the emergence of fully nationwide trade in early modern Japan.
- - - More in the WIKIPEDIA !

- quote -
. . . Merchants and shopkeepers occupied the bottom of the social scale.
Initially they were hampered by restrictions on travel and trade, but later the increase in urban population as well as the need for greater cooperation between fiefs, led to the creation of guilds, and restrictions were lifted. Through the formation of guilds, which required official sanction from the Baku-Han, a nationwide network of commerce was established. It met important needs of both the Tokugawa Government and the local Daimyo. Tokugawa officials needed a convenient way to exchange for gold the tax revenue they received in rice. The Daimyo needed a central location at which to exchange their provincial goods for the goods of other provinces and thereby enhance the self-sufficiency of their fief. Both the Daimyo and the Tokugawa lords were motivated to support the guilds by a desire to increase the splendor of their lives.

The Baku-Han designated the city of Osaka as the principle port of exchange. There, great rice warehouses were established and a central currency was promoted. Rice warehouses became brokers and then lenders, trading on rice futures. The sanction of specific trade guilds, such as silk and sugar, soon followed. Next were the shipping guilds which improved the flow of merchandise and the carpentry guilds which enabled large-scale construction. Osaka quickly became the country's main center of commerce and its population of sellers, buyers and middlemen steadily grew.
- source : Steven Hunziker - 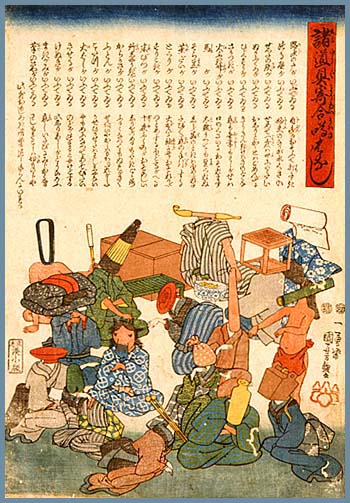 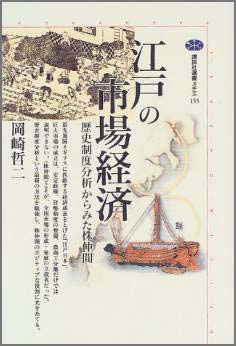 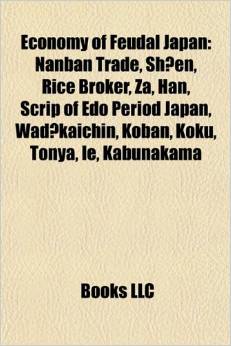