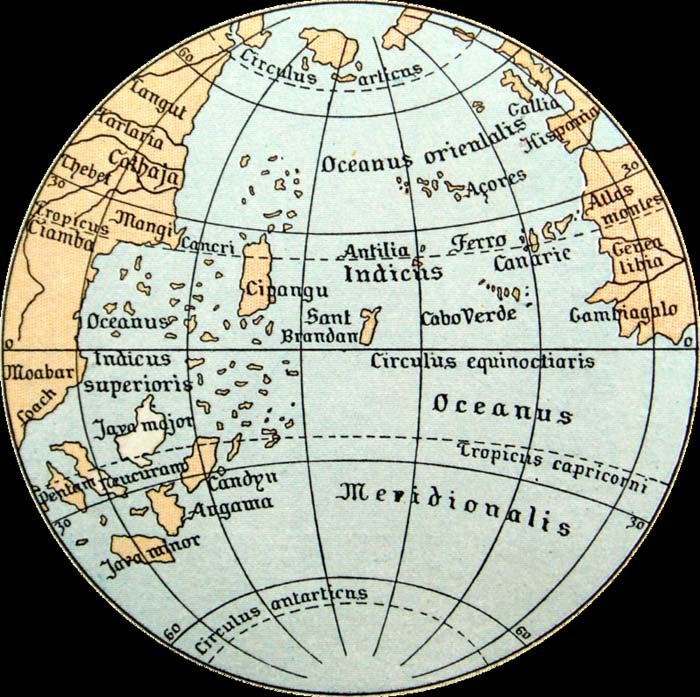 The English word for Japan came to the West from early trade routes. The early Mandarin Chinese or possibly Wu Chinese word for Japan was recorded by Marco Polo as Cipangu. The modern Shanghainese (a dialect of the Wu Chinese language (呉語) or topolect) pronunciation of characters 日本 (Japan) is still Zeppen [zəʔpən]. The Malay and Indonesian words Jepang, Jipang, and Jepun were borrowed from Chinese dialects, and this Malay word was encountered by Portuguese traders in Malacca in the 16th century. It is thought the Portuguese traders were the first to bring the word to Europe. It was first recorded in English in 1577 spelled Giapan.

Jipangu  Cipan (日本)
Cipangu was first mentioned in Europe in the accounts of the travels of Marco Polo. It appears for the first time on a European map with the Fra Mauro map in 1457, although it appears much earlier on Chinese and Korean maps such as the Kangnido. Following the accounts of Marco Polo, Cipangu was thought to be fabulously rich in silver and gold, which in Medieval times was largely correct, owing to the volcanism of the islands and the possibility to access precious ores without resorting to (unavailable) deep-mining technologies.

The Dutch name, Yatpun, is derived from the southern Chinese pronunciation of 日本, Yatbun or Yatpun.
The Dutch J is generally pronounced Y, hence Ja-Pun.
- - - More in the WIKIPEDIA !

- quote - Japan Times -
From ‘samurai’ to ‘Hello Kitty,’
search data show how the world’s view of Japan has changed
The analytics data are included in the online version of this article.

Has the image of Japan as the land of Hello Kitty upstaged its perception as a country full of swaggering samurai and mincing geisha in the Western mind? That’s what the latest Web analytics data would seem to indicate.

Japan apparently first entered the Western psyche in the 15th century as European traders expanded eastward. Cartographers called the country Cipangu in its first depiction on a Western map in 1453; the first recorded use of Giapan in English came in 1577.

Some of the first literary references to provide a sense of how Westerners in the 19th century viewed Japanese culture appear soon thereafter. The words samurai and geisha enter Ngram almost as soon as data begins in 1800. “Samurai” starts to take off from the 1820s, while “geisha” comes into more common use from the 1840s. “Samurai” continues its steady rise almost to the new millennium, but “geisha” plateaus from around 1940.

For a more granular view of the past decade since Google’s search engine took off, Google Trends measures the frequency of Web search terms relative to total search volume from 2004 through the present. The term “samurai” continues to reign over “geisha” in the new millennium, but “geisha” has a brief moment of glory in 2006, when it eclipses the term “samurai” soon after the release of the film “Memoirs of a Geisha,” which was sold here as “Sayuri.”

Then, in 2007, something notable happens: Hello Kitty overtakes “samurai” as a popular search term. It retains its dominance for several years, a time that produced headlines like “Hello Kitty products target young males,” before subsiding into rough parity with “samurai” at the present.

Google Trends searches are “black boxes” into which one can read only so much without understanding Google’s “secret sauce” algorithms. But given how much perceptions of Japan have changed in recent decades, it’s perhaps not pushing things too far to take the triumph of “Hello Kitty” over “samurai” as a proxy for the shifting view of Japan from one of a warlike nation to that of the nonthreatening (notwithstanding Prime Minister Shinzo Abe’s push for remilitarization), ineffably cute land of “Cool Japan.”

Taking this trend to its logical conclusion, the Japanese word for “cute,” kawaii, barely registers a blip until 2010. But by July 2015, “kawaii” is up to four relative to samurai’s 10 and Hello Kitty’s eight on Google Trends’ scale of 0-100.

A sign of a continuing softening of Japan’s image in the English-speaking mind to come? Hard to say, but it should be noted that aside from a brief spike after the release of the latest Godzilla film in 2014, Hello Kitty also maintains her dominance over the iconic Japanese monster for the entire decade covered by Google Trends.

At the moment, both “Hello Kitty” and “kawaii” have also eclipsed “geisha” in the world’s imagination. Once again, it’s dangerous to draw conclusions with nontransparent data, but one could speculate that the image of Japan as the land of cute has overtaken its image as a country of exotic sexuality.

Eclipsing all cultural indicators, however, are keywords that represent Japan’s continuing reputation for manufacturing prowess. Toyota registers close to the top of the 0-100 scale throughout the Google Search decade from 2004 to 2015, while “Godzilla,” “Hello Kitty” and “samurai” generally remain at 10 or under.

Sony can take some comfort in the fact that, despite its recent woes, the electronics giant still maintains a lead over all major Japanese companies in search queries in the English-speaking world surveyed by Google Trends. No doubt this is due not only to iconic products like the Walkman but also to the international nature of Sony, with its Sony Pictures and Sony Music arms. “Sony” beats not only “Toyota,” but also “samurai,” “anime,” and even that most popular of Japanese delights, “sushi.”

Google Trends also offers insights into the regional popularity of search terms. Unsurprisingly, Southeast Asia remains the area most under Japan’s cultural spell. The Philippines ranks at the top for both “samurai” and “Hello Kitty,” as well as a term symbolic of contemporary Japan like “anime.”

The analytics data are included in the online version of this article.
Next week, Mark Schreiber looks at the Japanese words that have fallen in and out of fashion in 2015.