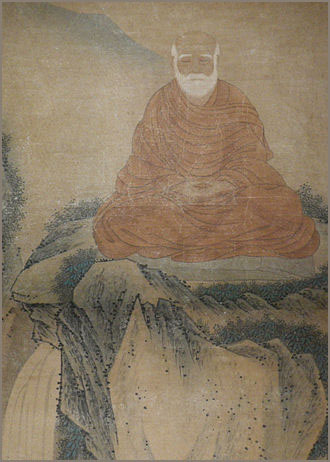 - quote -
Daruma: “I do not know”
This painting represents the first Zen patriarch, often referred to as Daruma in Japanese, but more properly called by his Sanskrit name Bodhidharma. He is believed to have been moved from India to China in the fifth and sixth century and there, through meditation, finally came to understand the Buddhist law (dharma). This is why his figure often occurs alongside Zen calligraphy, representing the continuous struggle to learning the Buddhist teachings.

Images of Bodhidharma express his effort to established continuity with Zen Buddhist teachings. This painting belongs to that tradition but Jiun, thanks to his unique flaked style, transformed the silhouette of the patriarch in an abstract form: with only two strokes, the artist portrays the monk in meditation while, above, two characters stand out: "I do not know" (Fushiki).

The concept is short, direct and powerful. It refers to a dialogue between Daruma and Emperor Wu of the Liang Dynasty and capture the essence of Zen Buddhism: as reported in 'Hekiganroku (published in 1300), the emperor met the monk in the year 520, and asked him about how he had obtained for supporting Buddhism; when he says "absolutely nothing" the Emperor, irritated, asked what was then the foundation of Buddhism and the answer was "a great void and no holiness.” More and more annoyed, he then asked "Who are you?" And Bodhidharma replied " I do not know".

After this dialogue Bodhidharma was no more welcome at the court and he took refuge in a cave in the Shaolin temple on Mount Song, where he sat in meditation for nine years. The painting represents this first development status of Chinese Zen tradition: Bodhidharma who sits still and quiet in front of a white wall. 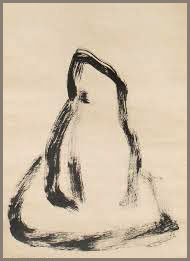 Jiun Onko (Jiun Sonja), one of the greatest Japanese Zen artist, born in Osaka, joined the cloister when he was thirteen, studied the Confucianism, the Shingon esoteric Buddhism and the Soto Zen. He was an excellent scholar, he learned Sanskrit been interested in ancient Buddhist manuscripts and learn the basic teachings of Buddhism; he founded in fact a movement that wanted to bring Buddhism back to its origins (“True Dharma”).

He was one of the reformers of the Edo period Zen and, still today, he is considered one of the greatest Zen calligraphers ever in Japan. His works are in all the museum collections of Japanese art all over the world.
- source : giuseppepiva.com/c -

- quote -
Unden Shinto was founded by Jiun Sonja (1718-1804), a Shingon priest who attempted to enhance Shinto through a fusion with Buddhist and Confucian ideas. Comparing the similarities between the I Ching and Shinto writings on such views as the heavenly mandate, divination, numerology, gods and spirits, and politics, he alleged that the creation of
the I Ching may have been influenced by Shinto. According to Chinese tradition, Fu Hsi created the eight trigrams based on the Ho t'u (Yellow River diagram). Jiun speculated that the Ho t'u was inspired by a Shinto mirror: "The images of the Ho t'u were manifested through the Okitsu Mirror [a round bronze mirror kept in the geku (Outer Shrine) of the Ise Shrine, one of the ten Shinto treasures]. Fu Hsi used the Ho t'u as the base for drawing the eight trigrams." .....
.....
Jiun's discussions on the Shinto origins of the I Ching were only piecemeal. He did not address important questions, such as how Fu Hsi and other Chinese sages were influenced by Shinto. A full-fledged theory of the Shinto origins of the I Ching did not appear until the emergence of the Hirata school a few decades later.
.....
Jiun strove to return to original Buddhism by studying Buddhist sutras in Sanskrit. For his Buddhist views, see Paul B. Watt, "Jiun Sonja (1718-1804): A Response Confucianism within the Context of Buddhist Reform," in Nosco, Confucianism and Tokugawa Culture, pp. 188-214.

The I Ching in the Shinto Thought of Tokugawa Japan
By Wai-ming Ng
- source : University of Hawaii Press - 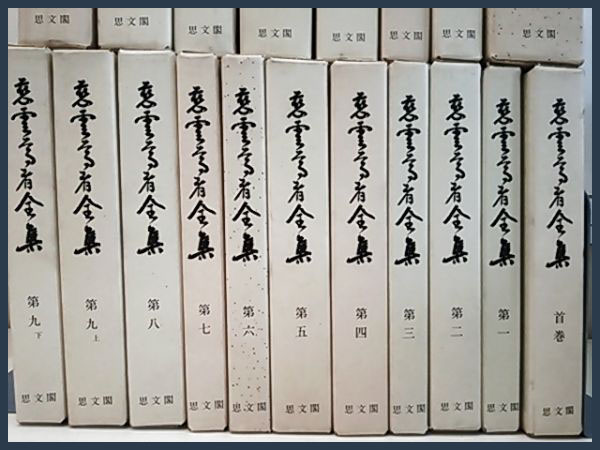 The Complete Works of the Venerable Jiun (Jiun Sonja zenshū).

- quote -
Unden Shintō
A branch of Shinto founded by the Edo-period Shingon monk Jiun Onkō (1718-1804).
As Jiun lived on Mt. Katsuragi, it is also called Katsuragi Shintō. Jiun's learning extended not only to esoteric Buddhism, siddham (Sanskrit philology), and Zen, but also to Confucianism and Shinto. In particular, he revived the monastic precepts through his promulgation of what he called the Precepts of the True Dharma (shōbōritsu). He also composed the Bongaku shinryō in one thousand fascicles, and made a great compilation covering the history of siddham studies; he was one of the outstanding scholars of his era. In response to the criticisms of Buddhism leveled by the Confucianists and Shintoists of his time, he attempted a reconstruction of the ancient Ryōbu Shintō. Some of his works relating to Shinto include Shin-Ju gudan (A Conversation Between Shintō and Confucianism), Shintō yōgo (Important Terms in Shintō), Shintō kokuga (Songs of the Shintō Realm), Shinchoku kuden (Oral Transmissions on the Oracles of the Gods), Ten no mikage (The Beneficence of Heaven).
Jiun held that no distinction existed between Shinto and esoteric Buddhism, and that it would be impossible to learn the essence of Shinto without also understanding esoteric Buddhism. Further, he was considered noteworthy for locating the basic meaning of Shinto in the relationship between lord and retainer while criticizing the Confucianists' emphasis on the marriage relationship or the relationship between friends; he is also known for arguing that Japan was a "divine land" (shinkoku) in which there was no need for the appearance of Confucian sages.
In these ways, Jiun diverged from the previous position that regarded Buddhism as principal and Shinto as subsidiary, taking a stance closer to Revivalist Shinto (Fukko Shintō) nationalism. Jiun's writings relating to Shinto are now collected in Volume 10 of The Complete Works of the Venerable Jiun (Jiun Sonja zenshū).
- source : Ito Satoshi - kokugakuin 2006 - 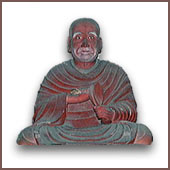