- quote
Teppo-gumi hyakunin-tai, or the Hundred-Member Gun Squad,
was founded by Tokugawa Ieyasu to defend his shogunate in the newly established capital of Edo. The squad was stationed in Shinjuku in an area named in its honor and known today as Hyakunin-cho (hundred-member town).
This Hyakunin-cho is home to the Kaichuinari-jinja Shrine, where many vassals of the squad visited to pray that their every shot hits the target. People later established the shustujin-shiki fair to commemorate the gun squad and also as thanksgiving for the luck bestowed by the shrine. 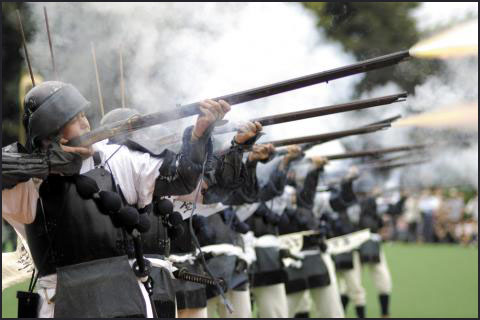 Today, the fair is held every odd year. Men clad in armor and helmet parade the neighborhood of Hyakunin-cho, test fire matchlock guns and give public demonstrations of battle field exercises.
- source : gotokyo.org/en/kanko/shinjuku

The Koshu Kaido was especially planned by Tokugawa Ieyasu to secure his route to escape Edo in case of an attack.
He had the group of 100 special armed guards live in Shinjuku to help and protect him in case of need. 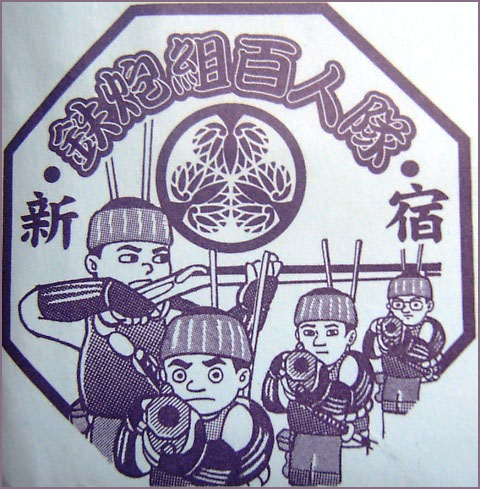 - quote -
During the Edo period, the villages of 柏木 Kashiwagi and 大久保 Okubo were agricultural districts on either side of Hyakunin-cho where samurai warrior residences were located.
These villages were known as vegetable producing areas. The samurai families cultivated plants and flowers and this a tradition was continued through the Meiji period (1868-1912) even though the samurai class itself had disappeared by then.
The area was particularly famous for its azaleas (tsutsuji).
Since Hyakunin-cho was a residential area of the constables (doshin) belonging to the Hyakunin (hundred-man) brigade of shooters operated by the Bakufu military government during the Edo period. During festivals held at the Kaichu Inari Shrine, they fired ceremonial volleys with firelocks.
- source : kanko-shinjuku.com - 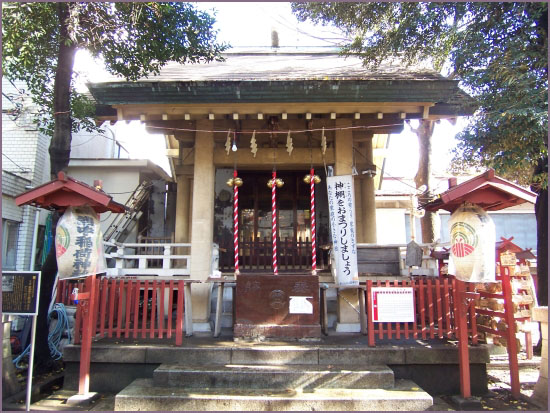 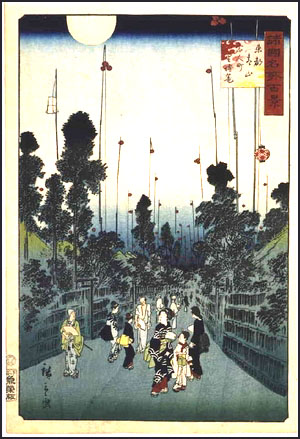 
At the temple 丸普陀山長楽寺 Choraku-Ji
there is a 鬼形の石 stone in the form of a demon, called
Yashajin 夜叉神 Yasha-jin, the Yasha Deity.
The stone had been in the garden of a member of a family in 青山百人町 Hyakunin-Cho in Aoyama.

- quote -
Choei Takano -
Physician and scholar of Western studies. Takano studied Dutch medicine in Nagasaki from a person named Siebold and opened his practice in Edo. He formed the research group of Western studies Shoshikai with Kazan Watanabe and others and delved into the study of Western culture. He was imprisoned for six years for writing “Yume Monogatari” (My Dream Vision), in which he criticized the diplomatic policies of the Shogunate, but he escaped from jail by bribing a prison guard to set fire to the prison. Although he returned to Edo and lived by hiding out in various places, he was eventually arrested and killed. 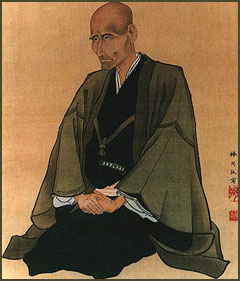 Choei changed his appearance by burning his face with chemicals and moved around the country, but he eventually returned to Edo in March 1850 and lived in hiding in Aoyama Hyakunin-cho. That area had a concentration of official residences of the Shogun’s foot soldiers and sympathizers, and the grounds of the residence of a foot soldier named Kojima contained a pawnbroker’s annex. Choei ran a medical practice on that premises under the false name of Sanpaku Sawa.

However, on the last day of October in the same year, he was attacked by a Shogunate official in an alley on his return home, arrested, and killed. A stone monument, inscribed with “The hiding place of Doctor Choei Takano,” stands where he died in what we know as Minamiaoyama. It was 48 years after his death before his honor was restored, and a commemorative monument inscribed with Kaishu Katsu’s composition was erected in Zenko Temple in Kita-Aoyama after he was posthumously bestowed the title of Lord.
In 1837, he wrote Yumemonogatari (My Dream Vision), which stressed the need to open Japan to the world after the 1837 attack on an American ship, the Morrison. He continued to translate Western books while on the run and translated such books as Iryo Suyo (Fundamentals of Medical Care). Although he was a brilliant scholar of Western studies and a pioneer in medicine, he had a rather unfortunate life.
- source : lib.city.minato.tokyo.jp -

平河天満宮 Hirakawa Tenmangu, Hirakawa Tenjin
Hirakawa Tenmangu shrine has been worshiped at by later scholars, notably the blind scholar 塙保己一 Hokiichi Hanawa (1746-1821) and the scholar of Western science, 高野長英 Choei Takano (1804-50), and continues to be associated with learning, and success in learning, to this day. As such, the shrine is a renowned destination for students praying for success in examinations.
.
EDO
Hirakawachoo 平川町 Hirakawa-Cho, Hirakawa district
.
https://edoflourishing.blogspot.jp/2018/03/otemachi-district.html
.