- quote -
the wife of Tokugawa Iesada (徳川 家定), the 13th Shogun of the Tokugawa shogunate of Japan 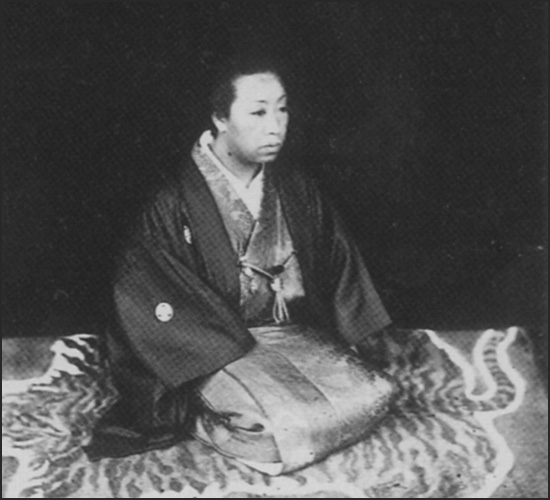 Tenshōin was born in Kagoshima in 1835. In 1853, she became the adopted daughter of Shimazu Nariakira. On August 21, 1853, she travelled by land from Kagoshima via Kokura to the Edo jurisdiction, never to return to Kagoshima again.

Atsuko was thought to have been sent to Edo castle with the aim of helping Shimazu Nariakira politically. The question of the next heir to the Shogunate was divided between the choice of Tokugawa Yoshinobu, then head of the Hitotsubashi-Tokugawa house and Tokugawa Yoshitomi, then head of Kii-Tokugawa house and later known as Tokugawa Iemochi. In order to ensure that Yoshinobu became the next in succession, Atsuko was arranged to wed into the Tokugawa clan.

In November, 1856, Atsuko married Tokugawa Iesada. In 1858, both Tokugawa Iesada and Shimazu Nariakira died. The 14th shogun was decided to be Tokugawa Iemochi. Following the demise of her husband, Atsuko took the tonsure, becoming a Buddhist nun, and took the name Tenshōin. In 1862, as part of the Kōbu Gattai ("Union of Court and Bakufu") movement, Iemochi was married to Imperial Princess Kazu-no-Miya Chikako daughter of Emperor Ninkō, and younger sister of Emperor Kōmei.
The Satsuma clan brought up the request for Tenshōin to return to Satsuma, but was rejected by Tenshōin herself. In 1866, Iemochi died. Tokugawa Yoshinobu became the next shogun. During the Meiji Restoration, Tenshōin and Seikan'in (Kazu-no-Miya's name after tonsure) helped negotiate for the peaceful surrender of Edo Castle.

She spent her remaining years nurturing Tokugawa Iesato, the 16th head of the Tokugawa clan. In 1883, she died in Edo at the age of 48. She was buried in Kaneiji in Ueno, Tokyo, together with her husband, Iesada.

The 2008 NHK Taiga drama Atsuhime (fifty episodes) was a dramatization of her life.
- - - More in the WIKIPEDIA ! 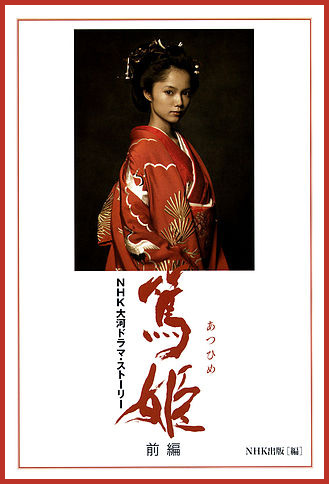 - quote
The Shogun's Queen: The Shogun Quartet
Lesley Downer
Only one woman can save her world from barbarian invasion but to do so will mean sacrificing everything she holds dear - love, loyalty and maybe life itself . . . 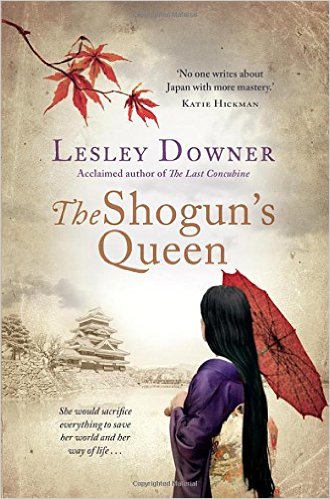 Japan, and the year is 1853. Growing up among the samurai of the Satsuma Clan, in Japan's deep south, the fiery, beautiful and headstrong Okatsu has - like all the clan's women - been encouraged to be bold, taught to wield the halberd, and to ride a horse.
But when she is just seventeen, four black ships appear. Bristling with cannon and manned by strangers who to the Japanese eyes are barbarians, their appearance threatens Japan’s very existence. And turns Okatsu’s world upside down.
Chosen by her feudal lord, she has been given a very special role to play. Given a new name - Princess Atsu - and a new destiny, she is the only one who can save the realm. Her journey takes her to Edo Castle, a place so secret that it cannot be marked on any map. There, sequestered in the Women’s Palace - home to three thousand women, and where only one man may enter: the shogun - she seems doomed to live out her days. But beneath the palace's immaculate facade, there are whispers of murders and ghosts. It is here that Atsu must complete her mission and discover one last secret - the secret of the man whose fate is irrevocably linked to hers: the shogun himself . . .
- source : amazon.co.uk/gp

Tokugawa Akitake (徳川 昭武, October 26, 1853 – July 3, 1910)
was a younger half-brother of the Japanese Shōgun Tokugawa Yoshinobu and final daimyō of Mito Domain.
He represented the Tokugawa shogunate at the courts of several European powers during the final days of Bakumatsu period Japan.
.
https://en.wikipedia.org/wiki/Tokugawa_Akitake
.