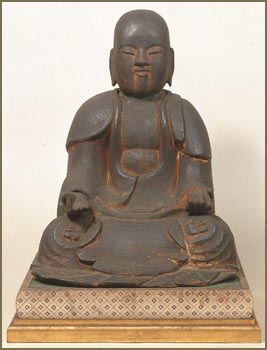 - quote
Chaya Shirōjirō
was the name of a series of wealthy and influential Kyoto-based merchants who took part in the red-seal trade licensed under the Tokugawa shogunate. Members of the Chaya family, they were also centrally involved in the country's production and trade in textiles. Along with the Suminokura and Gotō families, the Chaya were one of the top merchant families in Edo period Kyoto.

Chaya Shirōjirō Kiyonobu 茶屋四郎次郎清信 (1545-1596)
likely the first of the line, was the son of a ronin of the Nakajima family, descended from lords of a territory in Owari province. His father, a friend of Shogun Ashikaga Yoshiteru, was crippled in the wars of the Sengoku period. Adopted into the Chaya family, he established a humble business in Kyoto making drapes. He developed a strong business relationship with one of his clients, Matsudaira Hirotada, and later sent his son Chaya Shirōjirō Kiyonobu to Mikawa province to serve as a squire to Hirotada's son, now known as Tokugawa Ieyasu.

Kiyonobu thus became one of the primary suppliers of the Tokugawa family, and quickly came into great wealth and influence in Kyoto. He accompanied Ieyasu in battle, at both the Mikatagahara (1573), and served him in other ways, as an intelligence agent in Kyoto and in secretly transporting messages and goods for Ieyasu during the time when Toyotomi Hideyoshi held power. He obtained a red-seal license (朱印状 shuinjō) from Hideyoshi, permitting him to trade in the ports of southern Vietnam, where he obtained silks and other goods. Chaya was supposedly the one who informed Ieyasu of Oda Nobunaga's death in 1582, and thus allowed him to escape the forces of Akechi Mitsuhide and Hideyoshi, who seized power in the aftermath.

He is said to have helped design the layout of the city of Edo, and for his last year or so of life, did not leave Ieyasu's side. He repeatedly refused formal posts as governor of various Tokugawa lands, insisting that he was not a soldier, and was granted a stipend of 200 koku instead.

Chaya Shirōjirō Kiyotada  茶屋清忠 (1584-1603)
Following Kiyonobu's death in 1596, his son Kiyotada took over the family business, and succeeded his father in his relationship with the Tokugawa lord. Kiyotada fought at the battle of Sekigahara (1600), and soon afterward was made head of all the merchants in the Kansai region, "with particular jurisdiction over the business community of Kyoto".

However, Kiyotada died young, in 1603, at the age of nineteen.

Chaya Shirōjirō Kiyotsugu  茶屋清次 (1584-1622)
Thus, with the patronage of the shogunate behind them, the remaining brothers Kiyotsugu (1584-1622), Michizumi, and Nobumune took over the Chaya family business, worked to monopolize the trade in raw silk, and served as official suppliers of a variety of goods to the shogunate. Kiyotsugu was assigned by Ieyasu to help oversee shogunal operations at the formal trading post in Nagasaki, where he could keep an eye on the foreign traders and Christian missionaries, while working to his own commercial benefit as well.

A friend of artist Honami Kōetsu, Kiyotsugu was active socially in the Kyoto art world, and was known as both a patron of the arts in general, and a collector of tea bowls and other implements of the Japanese tea ceremony.

Shirojiro helped Tokugawa Ieyasu during his hasty retreat from Sakai (Osaka) via Iga to Mikawa by going before him, paying money to the village heads to let Ieyasu pass.
This was also achieved with the help of Hattori Hanzo, a Ninja from the Iga and Koga region.

- quote -
Iga-goe(Crossing Iga)
TOKUGAWA Ieyasu experienced four disasters in his life, among which, according to him, Crossing Iga was the most difficult. When he learned his predecessor ODA Nobunaga committed suicide because of rebellion, he was on his way home with only 30 odd allegiants in civilian clothes, although they were all chief retainers. Ieyasu said, “I should kill the rebel, but we are too small a party to fight against the rebel force. It may be better for me to remain in dignity by committing suicide by harakiri.” A follower then made a proposal, however, “Let’s return home, raise forces, and send a punitive expedition against the rebel. That is our obligation to Nobunaga.” So, they discussed how they would be able to escape.

Although they were annoyed by bandits and riots that usually accompanied rebellion, they could somehow come to Iga through a number of dangerous points with the aid of several local lords. After they entered Iga, local warriors of Koka and Iga guided them to Ise. Thereafter, they returned home on ships. Ieyasu later hired two hundred Koka and Iga men and appointed HATTORI Hanzo to the head of the group, which is the beginning of the Iga section of Tokugawa shogunate.
- source : ninja-museum.com/ninja-database - 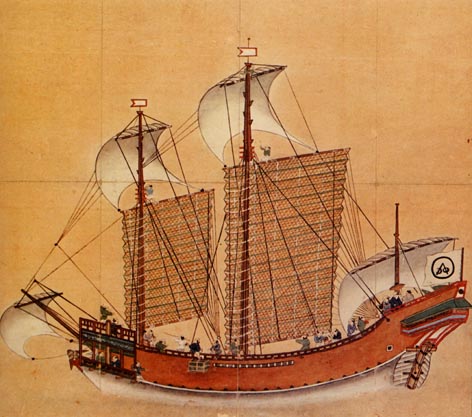 - quote -
Japanese armed merchant sailing ships bound for Southeast Asian ports with red-sealed letters patent issued by the early Tokugawa shogunate in the first half of the 17th century. Between 1600 and 1635, more than 350 Japanese ships went overseas under this permit system.
..... The Red Seal system appears from at least 1592, under Hideyoshi, date of the first known mention of the system in a document. The first actually preserved Shuinjō (Red Seal Permit) is dated to 1604, under Tokugawa Ieyasu, first ruler of Tokugawa Japan. Tokugawa issued red-sealed permits to his favourite feudal lords and principal merchants who were interested in foreign trade. By doing so, he was able to control Japanese traders and reduce Japanese piracy in the South Sea. His seal also guaranteed the protection of the ships, since he vowed to pursue any pirate or nation who would violate it.
..... Ship design ...
The ships were managed by rich trading families such as the Sumikura, Araki, Chaya and Sueyoshi, or by individual adventurers such as Suetsugo Heizo, Yamada Nagamasa, William Adams, Jan Joosten or Murayama Toan. The funds for the purchase of merchandise in Asia were loaned to the managers of the expedition for an interest of 35% to 55% per trip, going as high as 100% in the case of Siam.
..... The 350 Red Seal ships recorded between 1604 and 1634, averaging about 10 ships per year,
..... In 1635, the Tokugawa Shogunate officially prohibited their citizens from overseas travel, thus ending the period of red-seal trade. .....
- - - More in the WIKIPEDIA !

hototogisu
sing to the painting
the east is blanched white
Tr. Cheryl A. Crowley