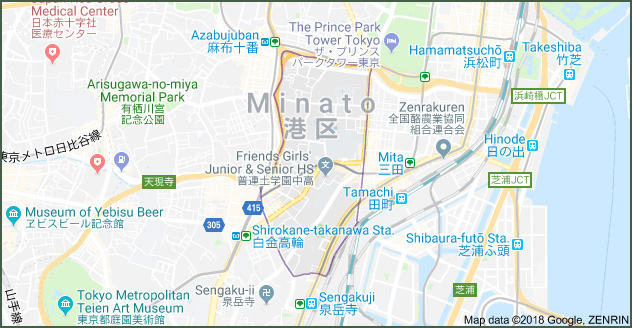 - quote
According to the 10th century book, 和名類聚抄 Wamyō Ruiju-shō (Japanese Names for Things), there was a place here written 御田 Mita.
(It’s referred to as 御田郷 Mita-gō, the 郷 gō just means “hamlet” or “small village”). That place name was originally written 屯田 Mita and fell under direct control of the Emperor and his court before the Taika Reform (645). 屯田 was specifically used for production of rice for the Imperial Court in Kyōto.
The Taika Reform
enacted sweeping land reforms and it makes sense that place names might change as the use of land changed. For a little while, the area was then used as a 神田 shinden (a rice field affiliated with a shrine), with the rice and/or its proceeds going to 伊勢神宮 Ise Jingū Ise Grand Shrine in Mie Prefecture.
The kanji 神田 can also be read as mita.
By the middle of the Edo Period, the area was coming to be increasingly written as 三田, which you have to admit is a lot simpler than the older ways. The reason is most likely that
御田 can be read as oden, onta, onda, and mita, while
神田 can be read as shinden, kamita, kanada, kada, kanda, kōda, and mita.
三田 also has variant readings, but is usually read as mita - or sanda, sata and mitsuda.
- source : japanthis.com/2013...


- quote -
... a district of Minato, Tokyo, located near Akabanebashi Station on the Toei Ōedo Line, Tamachi Station on the Yamanote Line, and Mita Station on the Toei Mita Line.
Mita is home to Keio University, Mita Hachiman Jinja, and the diplomatic missions of Kuwait, Italy, Hungary, Papua New Guinea and Australia.
- - - - - Slopes
Many roads up to the Mita plateau have named slopes of historical significance. Each is marked by a wooden post which explains the name.
Hijiri zaka 「聖坂」
corresponds to the ancient Tōkaidō 「東海道」 road. As for the slope, the name changes from the top of Isarago zaka 「伊皿子坂」to the Nihon enoki dori 「二本榎通り」.
. Gyoranzaka (魚藍坂 / 魚籃坂) .
Katsurazaka (桂坂)
is a hill road which lies between Takanawa 2-chōme and 3-chōme. A long time ago, ivy and vines covered the surface of this hill, though an alternate etymology says that a Buddhist priest who wore a wig (鬘 katsura) died along this slope suddenly on a return trip from Shinagawa.
Zakurozaka (石榴坂)
is a hill road which crosses between Takanawa 3-chōme and 4-chōme. The area has many hotels. The street was probably named because there was a pomegranate tree (石榴 zakuro) in the middle of a slope a long time ago.
Hebizaka (蛇坂)
is a slope which is in district four of Mita. Hebi means snake.
Anzenjizaka (安全寺坂)
is a hill road crossing between Mita 3-chōme and 4-chōme. The temple of Anzenji was built here in the Edo era.
Horazaka (洞坂)
is a hill road in Takanawa 3-chōme. The name means "cavernous slope," in Japanese. It is alternatively called Horazaka (法螺坂) or "conch shell slope" and Borazaka (鯔坂) or "herring slope."
Hiyoshizaka (日吉坂)
is a hill road which forms the border of Shirokane 2-chōme and 4-chōme. It goes from Meguro-dori in the southwest to Sakurada-dori in the northeast, and goes past the Kuwaharazaka (桑原坂) to the south.
The name originates from the Noh actor Hiyoshi Kahei who lived nearby.
Tsunazaka 綱坂 / 綱の手引坂
Mita Second district.
- - - More in the WIKIPEDIA ! 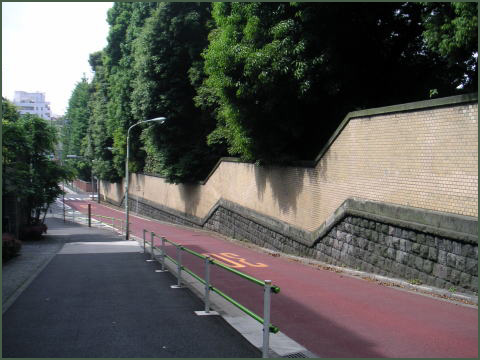 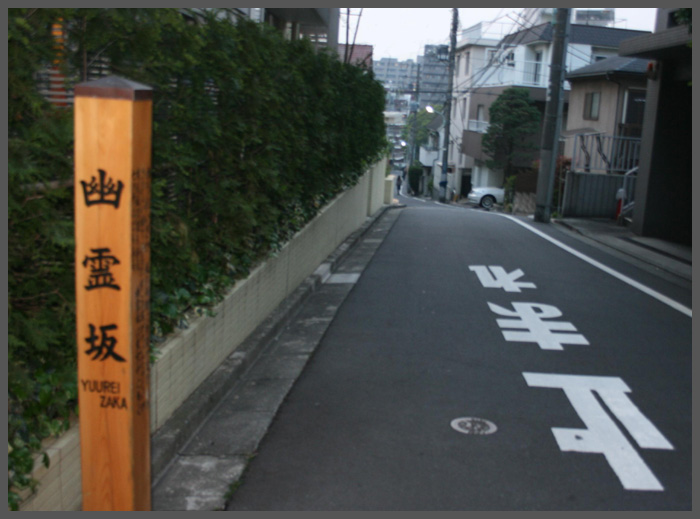 - quote -
a hill road located in Mita 4-chome in Minato, Tokyo.
The slope climbs the promontory from east to west, and climbs along busy Sakurada Avenue and terminates at the intersection with Hijiri zaka. There are two possible sources for the name of the avenue:
"Yūrei" meaning ghost, due to the presence of numerous temples along the street, giving it a desolate atmosphere such that ghosts might appear and
"Yūrei," an alternate reading for the given name of the first Minister of Education in Japan, and scholar Mori Arinori, who lived in the vicinity.
Mori Arinori 森有礼 (1847 – 1889)
- - - More in the WIKIPEDIA ! 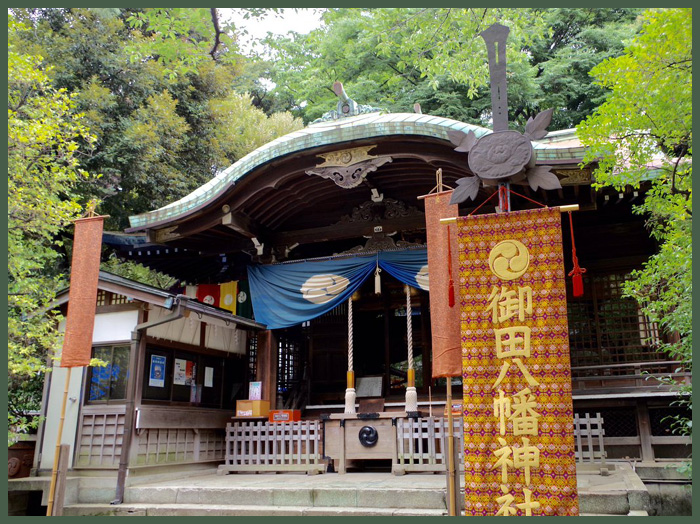 - quote -
This Jinja is one of the four candidates to be the Hiei Jinja mentioned in the Engi-shiki. Said to have been established in August 709 to enshrine the guardian deity of Japan’s eastern provinces. In 1011 the shrine was moved to what was then Mita District in Musashi Province and became a centre of worship of the tutelary kami of the Watanabe clan, a tributary family of the 52nd emperor, Saga (809-823).
Construction of a main hall at what is the present site of the shrine was completed in 1628. In 1668, however, it was destroyed by fire: rebuilding was completed in 1672. In September 1869 the shrine was renamed Hiei Jinja, before being again renamed, as Mita Hachiman Jinja in 1874. Come the fire bombings of 1945 and the main hall, which had survived since 1672, was burnt to a cinder, along with the rest of the shrine. Rebuilding was completed in 1954.
- source and photos : Rod Lucas - 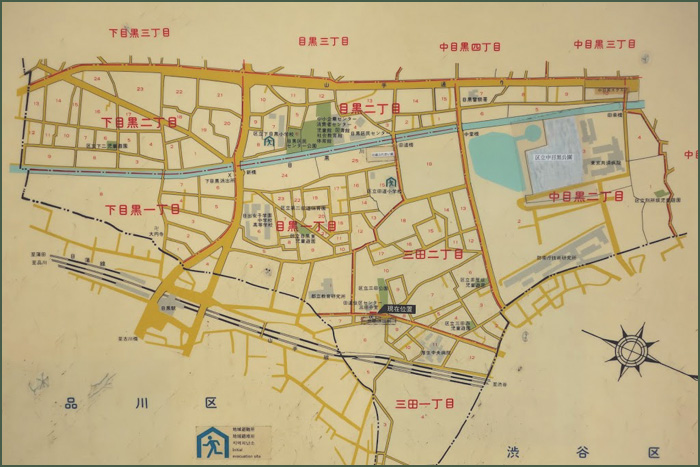 In 1722, the 8th Shogun Yoshimune ordered some josui上水 (waterways on the ground) to be put under ground, because some thought the wooden waterways would be at risk of fire.
Since 1724 the water from 三田用水 Mita Yosui was used for farming in 14 villages in Mita, Meguro and further downstream.
Because the Mita waterway came from a plateau, they could use water mills further downstream, since Meiji even for industrial purposes in Meguro.
After the war, the Mita waterway was abolished and now only a memorial stone in Meguro reminds of its existence. 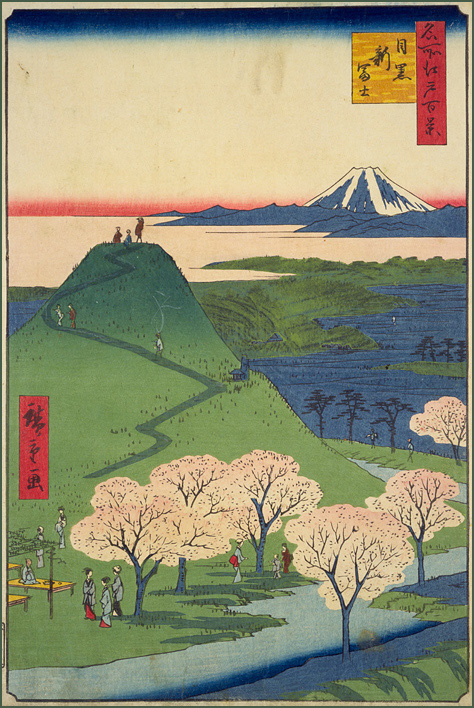 - quote -
View of a mini-Fuji built in 1829 on the estate of a shogunal retainer named Kondo Iuzo, well known for his exploration of the northern island of Hokkaido. It was a late Edo practice to construct miniature replicas of Mount Fuji. The first such mini-Fuji was built in 1779 in Takata (now the site of Waseda University) by a practitioner of Fujiko, a popular religion that worshipped Mount Fuji as a transcendent god. The miniature replicas enabled women, children, the elderly and infirm to climb Fuji.
The mountain shown in this print is smoother than most mini-Fujis, which were generally built of rough lava transported from Mount Fuji itself and the zigzag path mimicked the route up the real mountain. The Kondo Fuji came to be known as the "New Fuji," in distinction to the early mini-Fuji nearby, (shown in the following print). Known as a religious site it was also a pleasure spot, for the splendid view it offered of the real Mount Fuji, shown in the distance.
The stream below is the Mita Aqueduct, which ran along the bluff and around the New Fuji, and the shrine hidden in the trees in the middle distance is the popular Meguro Fuco, probably the destination for visitors stopping off at the mini-Fuji.
Seven years after the founding of the New Fuji, Kondo Iuzo's son killed a neighboring farmer and his family in a dispute in a right to sell souvenirs to mini-Fuji visitors, resulting in the disgrace of the Kondo family. The mini-Fuji was leveled in 1965 for the construction of a research institute of KDD, Japan's international telephone and telegraph company. Stone markers from the "New Fuji" are still preserved behind the hedge on the south side of the institute lawn.
- source : brooklyn museum -


. The many waterways of Edo - Introduction .