There are two districts with this name, one in 文京区 Bunkyo ward and one in nearby 豊島区 Toshima ward. 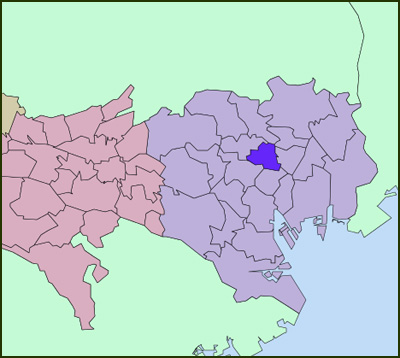 Bunkyō
"Literature Capital" is a special ward located in Tokyo, Japan. Situated in the middle of the ward area.
- - - More in the WIKIPEDIA ! 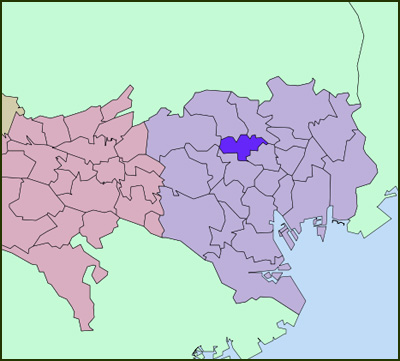 Toshima
is one of the eight central wards of the Tokyo Metropolitan area. Located in the northern area of Tokyo,
Toshima is bordered by the wards of Nerima, Itabashi, and Kita wards, in the north, and Nakano, Shinjuku and Bunkyo in the south.
- - - More in the WIKIPEDIA !


Horses were the most important means of transportation and very important to the people of Edo.
. uma 馬, koma 駒 - horse amulets .
The horse is also one of the 12 zodiac animals

In the early Edo period, Komagome was a plain, where many wild horsed lived, giving reason for its naming.
Another theory goes back to
Yamato Takeru, who was surprised to see the many horses of his allies gathered here for his Eastern Expedition and had used the many trees to bind the horses on them.
He called out: uma komitari 馬込みたり "So many horses have come together here!"
The komi later changed to gome.

It is composed of many sub-districts
駒込片町、駒込曙町、駒込富士前町、駒込上富士前町、駒込吉祥寺町、駒込浅嘉町、駒込動坂町、駒込神明町、小石川駕籠町
There were at one time seven Komagome sub-districts, called
Komagome shichiken mura 駒込七軒村 Seven villages of Komagome.
They also used to be called
. Somei shichiken mura 染井七軒村 .
Somei was a cluster of small towns and villages that specialize in growing ornamental plants and trees to plant in the gardens of all the wealthy Daimyo in Edo. 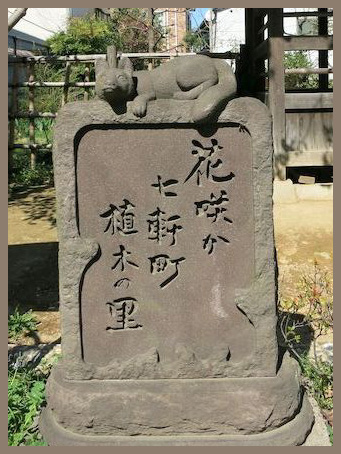 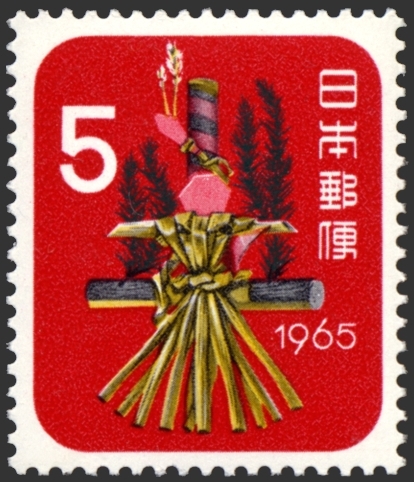 stamp with the straw serpent, from 1965

This shrine is located in :
5 Chome-7-20 Honkomagome, Bunkyo, Tokyo

Hon-komagome-eki 本駒込駅 Honkomagome Station is a subway station on the Tokyo Metro Namboku Line in Bunkyo.

- quote -
Rikugien is often considered Tokyo’s most beautiful landscaped garden. Built by the 5th Tokugawa Shogun Tsunayoshi in the 17th century, it reproduces 88 scenes from famous Japanese poetry. It has a traditional Edo-period design with a pond, small hill and trees. The garden was later neglected following the death of it’s key designer and was restored in 1878 by the owner of Mitsubishi, Iwasaki Yataro before it was donated to the Government in 1938.
It is one of Tokyo’s more spacious parks and takes roughly an hour to explore, and longer during cherry-blossom and autumn-leaf viewing seasons. There are different tea houses serving traditional tea and sweets to the public (around ¥500 each), including Fukiage Chaya which is located on the water’s edge. Seasonal flowers are a major attraction even in spring and summer, with plenty to explore and admire throughout the year.
- source : tokyocheapo.com/// -

The Nakasendo Highway branch off of the Nikko Highway at 駒込追分 Komagome-Oiwake.

In the Edo period, the village 駒込村 Komagome mura was located here.

- quote -
Is Hon-Komagome the Original Komagome?
- - - - - No, it isn’t.
When the same place name has variations, the kanji 本 is sometimes read as moto “source” (in place names, often “old, original.”
But Hon-komagome is different. In the former Tōkyō City, there was an ward called Hongō-ku 本郷区 Hongō Ward but in 1966 administrative units were re-assigned when the city became the Tōkyō Metropolis. At that time, Bunkyō Ward and Toshima Ward found themselves both in possession of areas called Komagome. The area in Toshima (the former Toshima District) kept the original name Komagome. The new Bunkyō Ward merged the former Hongō Ward name with the old name and so it became Hon(gō) + Komagome = Hon-komagome. So the meaning is not “Original Komagome” as some might think, the original Komagome is the area still called Komagome.
- source : japanthis.com... -


Komagome-eki 駒込駅 Komagome Station is a railway station in Toshima. 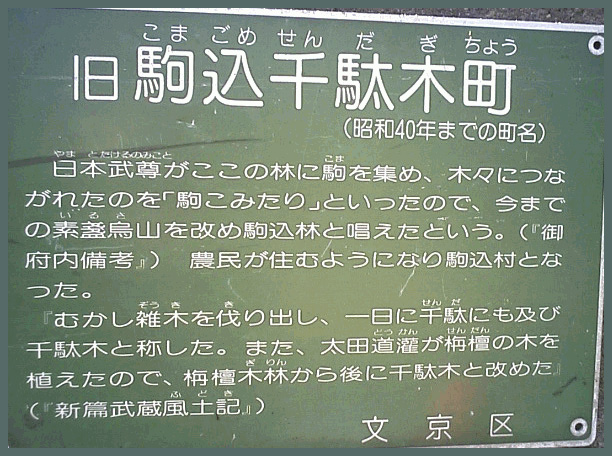 - quote -
Sendagi is a mixed residential and shopping area between Nezu and Yanaka. Today the area is distinctly shitamachi. However, if you go there you’ll notice slopes which are clear indicators that in the Edo Period the area was mixed with the elites living on the yamanote (high city) and the merchants and other people living on in the shitamachi (low city) while low ranking samurai naturally lived on the hillsides according to rank.
... 谷根千 Yanesen, an abbreviation based on the collective areas of 谷中 Yanaka, 根津 Nezu, and 千駄木 Sendagi.
The area is dotted with temples, shrines, shops dating as far back as the Edo Period, and is literally so steeped in history ...
The area was formerly part of Komagome Mura 駒込村 Komagome Village and in fact today is still officially part of Komagome. The name Komagome isn’t attested until the Sengoku Period. One the other hand, 千駄木 Sendagi isn’t attested until the early Edo Period when it appears as a label in a map. The label reads Ueno Tōzen'in mochi Komagome Sendagi o-hayashi 上野東漸院持ち駒込千駄木御林 the Komagome Sendagi o-hayashi which is controlled by Ueno Tōzen Temple.
Another early Edo Period map includes the label Ueno Kanshō'in mochi Komagome Sendagi o-hayashi 上野寒松院持ち駒込千駄木御林 the Komagome Sendagi o-hayashi which is controlled by Ueno Kanshō Temple. An 御林 o-hayashi was a hilltop wooded area owned by the shōgunate, but control of the area was granted to a lord or temple.
About 1656,
the former hilltop forest came to be the site of a daimyō residence of the lords of Bungo no Kuni Funai Han 豊後国府内藩 Funai Domain, Bungo Province (present day Oita Prefecture in Kyūshū). The family was the 大給松平家 Ōgyū Matsudaira, a samurai family from Mikawa no Kuni 三河国 Mikawa Province, Tokugawa Ieyasu’s homeland. As Edo depended on the shōgunate and the shōgun himself was from Mikawa, having a Mikawa family bearing the name Matsudaira bolstered the area’s prestige[. The hill became a yamanote town comprised of high ranking samurai residences. It seems that because the Ōgyū residence was first the prestigious palace built on the hilltop, the area came to be to be known as Ōgyūzaka 大給坂 Ōgyū Hill. If you go to the top of Ōgyūzaka there is a crappy little park with a huge gingko tree called the 大銀杏 Ōichō. They say this tree stood inside the original Ōgyū property.
Nearby
is another hill called 道灌山 Dōkanyama. It’s said that at the end of the Muromachi Period, 太田道灌 Ōta Dōkan had a branch castle here which he built for tactical support of Edo-jō 江戸城 Edo Castle.
..... 千駄 senda was another word for takusan 沢山 a lot.
- The 1000 Da Theory - firewood
da 駄 is a unit of measurement that describe how much stuff you can put on a horse’s back.
- The Ōta Dōkan Did It Theory
he re-forested the area by planting sendan 栴檀 Chinaberry trees here.
- It’s a Reference to a Traditional Japanese Prayer For Rain
..... amagoi 雨乞い prayer for rain. In the common parlance, this activity was called 千駄焚き senda-taki burning 1000 da.
There is also the district 千駄ヶ谷 Sendagaya.
- source : japanthis.com... - 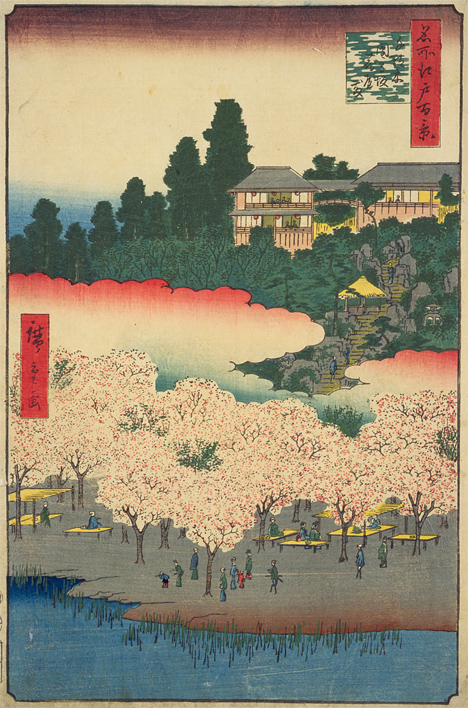 This area was originally forest land called 千駄木御林 Sendagi Ohayashi, and was contributed as a supply area for firewood after the construction of Ueno Kan'ei-ji Temple. It is said that the area was named Sendagi because senda was the amount of goods carried by a thousand horses and a senda of firewood was cut each day. Because the top of 団子坂 Dango-zaka Hill, which runs from Sendagi to Yanaka and Ueno, overlooks 佃沖 Tsukuda-oki , it was also known as 汐見坂 Shiomi-zaka Hill, and there were many dango (rice dumpling) shops along the roadside. There were many gardeners on top of the hill, and some sort of garden plants could be seen throughout the year. In 1856, a gardener who cultivated chrysanthemum moved to Sendagi from 染井 Somei, and the area became known for kiku ningyo (dolls wearing clothing made of chrysanthemums).
At the bottom of the hill, the 谷戸川 Yato-gawa River (Aizome-gawa River) threaded between the Hongo and Ueno plateaus, but it was turned into a culvert after the Great Kanto Earthquake. It is said a gardener named 宇平治 Uheiji opened a flower garden called 紫泉亭 Shisentei and established a pond.
- source : ndl.go.jp/landmarks/e/sights/sendagi -


- quote -
Sendagi
Sendagi Station is located in the Sendagi district of Bunkyo Ward of Tokyo. It is operated by Tokyo Metro for its Chiyoda Subway Line.
Sendagi is part of the historical area known as 谷根千 Yanesen.
The atmosphere of this simple and cozy residential district still holds signs of the Edo period. One can still find traditional wooden houses, small old-styled pubs (Izakaya), and a large number of old temples here mainly because this area has miraculously survived the 1923 Kanto earthquake and the World War II bombings. Walking through the narrow streets of Sendagi will take you to many of these sights. Among the most prominent of these are:
Daienji Temple
Choanji Temple
Tennoji Temple
Yanaka Cemetery
Asakura Choso Museum ( Choso Sculpture Hall )
Yanaka Ginza
- source : tokyo-tokyo.com/Sendagi -