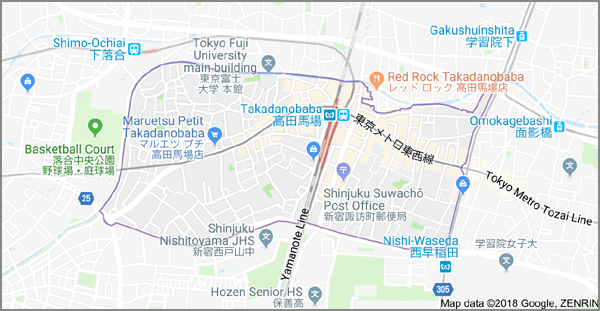 The original house grounds of the Edo period were called "Takatanobaba" (TakaTA no baba).
They soon became famous for its annual Yabusame archery on horseback.
When a train station was to be build about 1 km away from this horse racing ground, the local residents did not want their name to "move", so eventually they all settled with calling the station
Takadanobaba eki 高田馬場駅 Takadanobaba station


- quote
Originally, the area's name was read Takatanobaba and many Tokyo residents in their 50s or older pronounce it as such. However, younger Tokyoites and residents who have come from outside Tokyo, use the pronunciation Takadanobaba. The area is also often referred to simply as "Baba".
The area was previously and officially known as Totsuka (戸塚).
In 1636, the shōgun Tokugawa Iemitsu built in the area a baba, a ground for horseback riding and horse racing. Takata was the family name of the mother of Matsudaira Tadateru (the sixth son of Iemitsu's grandfather, the previous shogun Tokugawa Ieyasu) who favored the area as a sightseeing spot. The name stuck to prevent confusion with nearby Totsuka town near Yokohama (now Totsuka-ku, Yokohama).
In 1694, Nakayama Yasubei (later Horibe Yasubei, one of the forty-seven rōnin) took part in a battle (the Takadanobaba Kettō 高田馬場の決闘) there.
Like neighboring Waseda,
the area is synonymous with students (albeit with a somewhat less salubrious image). In addition to serving students commuting to Waseda University, the area is home to many educational institutions including vocational colleges and preparatory schools. Gakushuin University is nearby, one station stop away in Mejiro.
Astro Boy, a fictional character created by Osamu Tezuka in 1952, was supposedly "born" in Takadanobaba on April 7, 2003. In commemoration, starting in 2003, the JR platform uses the theme music from the TV series to signal the departure of a train. Also, many lamp posts in the area carry pictures from the TV series, and two large murals depicting Tezuka's works are across the street of JR Takadanobaba station.
- source : wikipedia 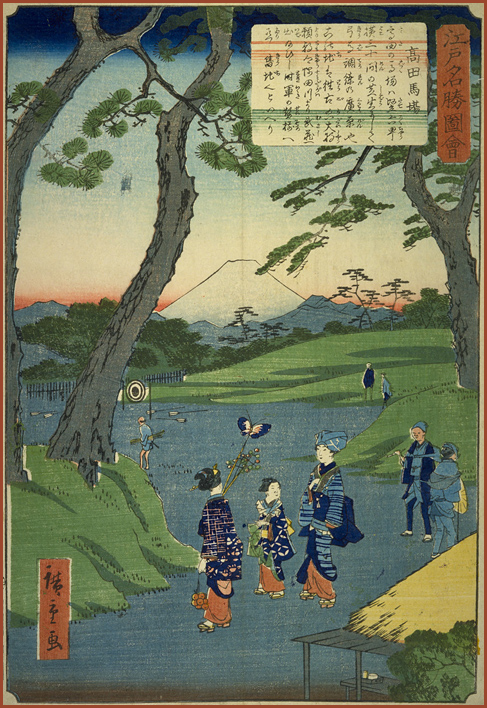 
- quote -
What Are Horse Grounds?
In the old days, the highest ranking samurai elite had horses and they needed large, open spaces to do horse stuff. Remember that Edo was a castle town. The main parts of the city radiated out from the castle. The city proper would have been too crowded for horses, so the suburbs and rural areas were better suited for that sort of thing.
...
Her Highness Takada's Horse Grounds
Much of the area that is now Niigata Prefecture was called Echigo no Kuni 越後国 Echigo Province. Inside that area was a fiefdom called Takada-han 高田藩 Takada Domain.
The mother of Tokugawa Ieyasu’s 6th son was from Takada-han. Her name was 茶阿局 Chā no Tsubone, but according to Japanese naming taboo and manners, she was referred to by most people as Takada-dono 高田殿 Her Highness Takada. She apparently loved the area for sightseeing because it wasn’t too far from the castle and she could watch strapping young samurai ride horses ... 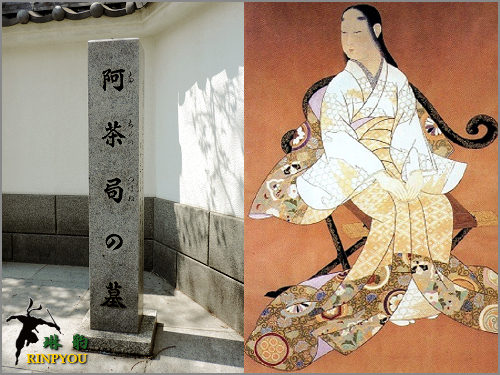 Because she loved the area, her son, Matsudaira Tadateru, built a park here to enjoy yūranchi enbō 遊覧地遠望 (something like “a scenic pleasure resort”).
..... The area was called 戸塚 Totsuka for a long time.
But when the Yamanote Line opened in 1910, the original station got the name Takada no Baba. (The local people rejected the official suggestion of Kami-Totsuka 上戸塚 (Upper Totsuka) in favor of Takada no Baba. Until 1975, this was just a station name, but the area was still called Totsuka. But in 1975, Shinjuku Ward did a revamping of their displayed addresses and the region that is now Takada no Baba became Takada no Baba officially.
- source : japanthis.com/2013... - 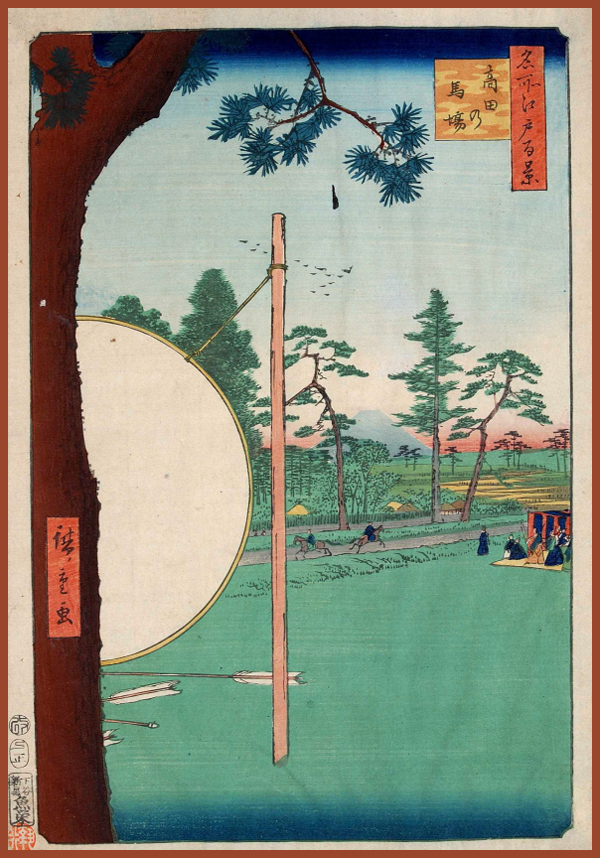 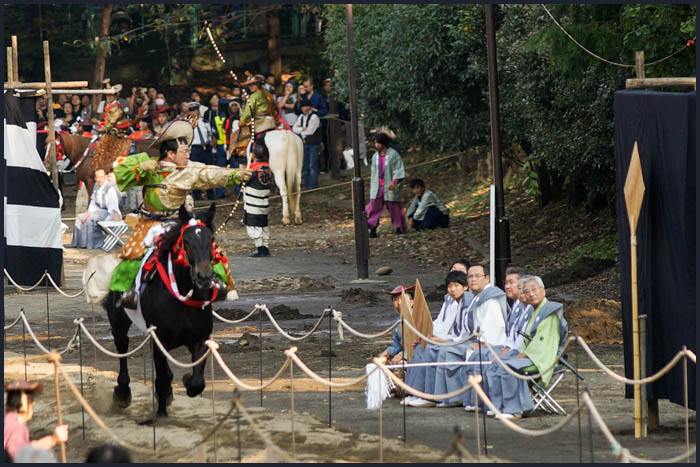 The yabusame practiced today at the Ana Hachimangū at Takadanobaba in Shinjuku, is said to go back to 1728 when the Shōgun Yoshimune ordered it as a petition for the healing of his son Ieshige's smallpox.
Yabusame is also an offering at festivals at the Tsuruoka Hachimangū and other regional shrines.
. Yabusame 流鏑馬 archery on horseback . 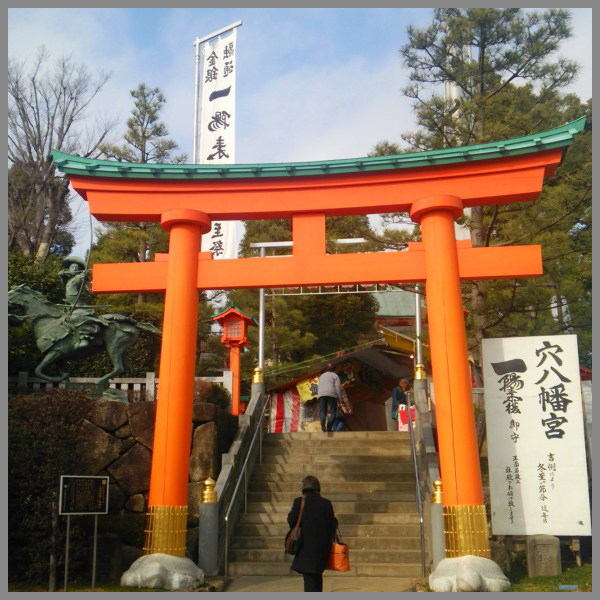 At the shrine Ana Hachimangu in Tokyo people come at the day of the winter solstice to buy this amulet. It is good for business and to make money, when they put it into the auspicious direction of the new year (ehoo 恵方).
They also hang it outside on the last day of the year and for the Setsubun rituals in February. The letters of the amulet have to face the auspicious direction.
Just as shadow receedes to new light, bad fortune will not receede and good luck is bound to come.
. tooji 冬至 Winter solstice .
ichiyoo raifuku 一陽来復" sun comes back" -- The 21st of December.

. Hachiman Shrines in the Edo . 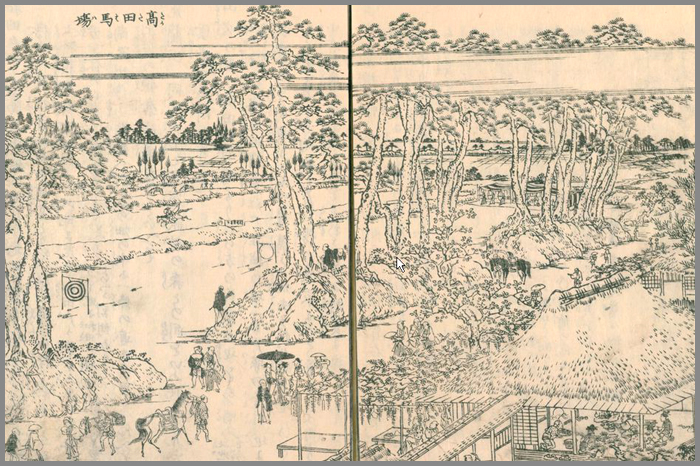 
- quote -
Takadanobaba Station (高田馬場駅 Takadanobaba-eki)
is a railway station in the Takadanobaba area of Tokyo's Shinjuku ward, situated between the commercial districts of Ikebukuro and Shinjuku.
新宿区高田馬場一丁目
- it serves
Yamanote Line
Seibu Shinjuku Line
Tokyo Metro Tozai Line (T-03)
It is mostly frequented by the students of Waseda University.
- - - More in the WIKIPEDIA ! 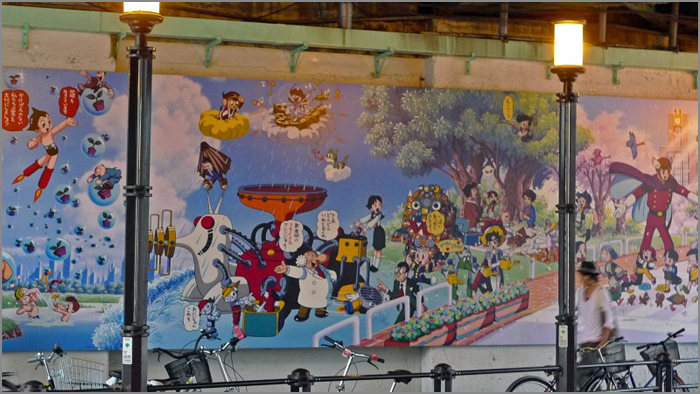 To bring back more life to the area, the local shop owners decided to use Astro Boy as their mascot.
Tezuka Osamu had lived in Takadanobaba for a long time and had his office there. 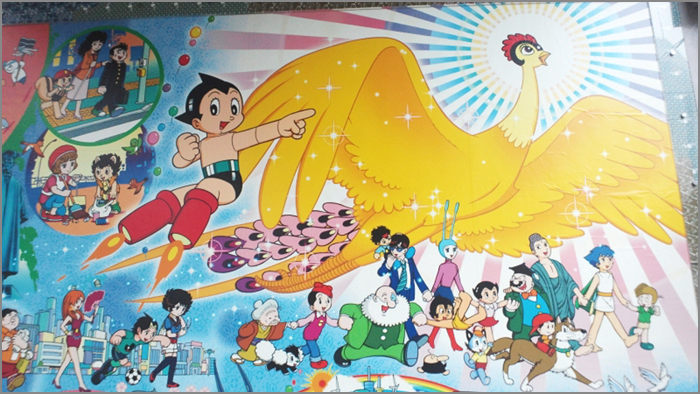