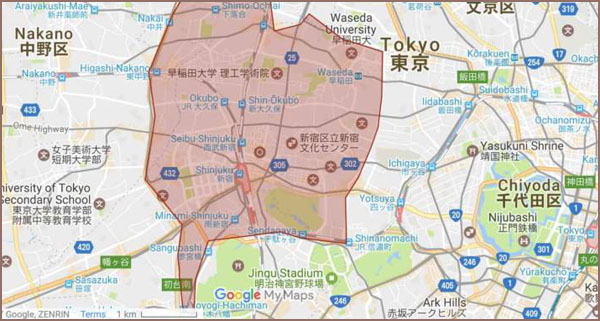 quote
In 1634, during the Edo period, as the outer moat of the Edo Castle was built, a number of temples and shrines moved to the Yotsuya area on the western edge of Shinjuku.
In 1698, Naitō-Shinjuku had developed as a new (shin) station (shuku or juku) on the Kōshū Kaidō, one of the major highways of that era. Naitō was the family name of a daimyo whose mansion stood in the area; his land is now a public park, the Shinjuku Gyoen.

In 1920, the town of Naitō-Shinjuku that comprised large parts of present-day Shinjuku, parts of Nishi-Shinjuku and Kabukichō was integrated into Tokyo City. Shinjuku began to develop into its current form after the Great Kantō earthquake in 1923, since the seismically stable area largely escaped the devastation. Consequently, West Shinjuku is one of the few areas in Tokyo with many skyscrapers.
© More in the WIKIPEDIA ! 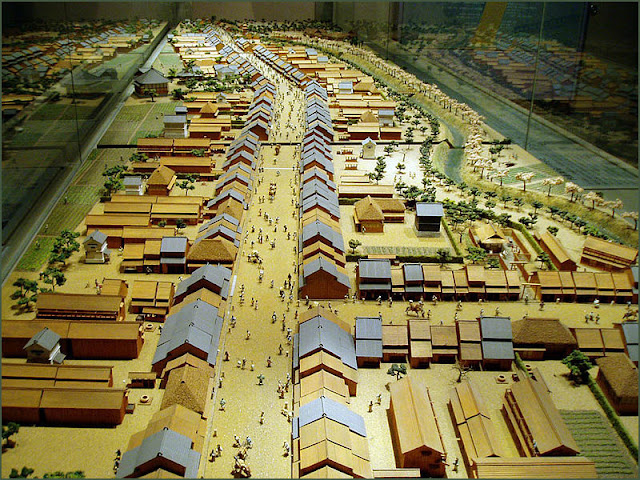 He is the "founding father of Naitō-Shinjuku 内藤新宿 Naito Shinjuku".
Kiroku was village headman of 浅草阿部川町 Asakusa Abekawamachi and helped develop Shinjuku after a new legislation in 1697.
Since his time, the head of the Takamatsu family took the name of Kiroku.

- quote -
Koshu-kaido Avenue was the main road from Nihon-bashi Bridge to Kofu, and from Kofu connected to Shimo-Suwa via the Nakasendo Avenue. Nihon-bashi Bridge was a long way from the first inn area —Takaido— on the Koshu-kaido Avenue, and travelers had a difficult time making the trip. For this reason, upon the request of Lord Takamatsu Kiroku , authorization was received to place an inn in an area midway.
Since the inn was placed on the property of 内藤 Lord Naito, who returned this land to the Shogun government, and since the inn was new, the area was called Naito-Shinjuku (Naito new inn), thus marking the origin of the name Shinjuku for the area.
On March 15, 1947, the three areas of former Yotsuya, Ushigome, and Yodobashi cities merged to create Shinjuku City. The name Shinjuku was used not only because of its historical significance, but also because Shinjuku Gyoen National Garden and Shinjuku Station were well known across Japan.
- source : city.shinjuku.lg.jp/foreign - 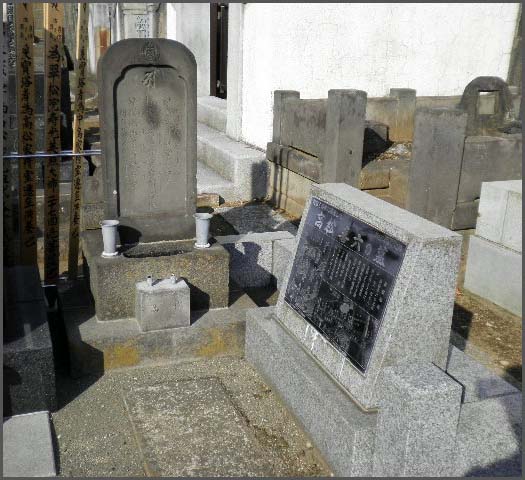 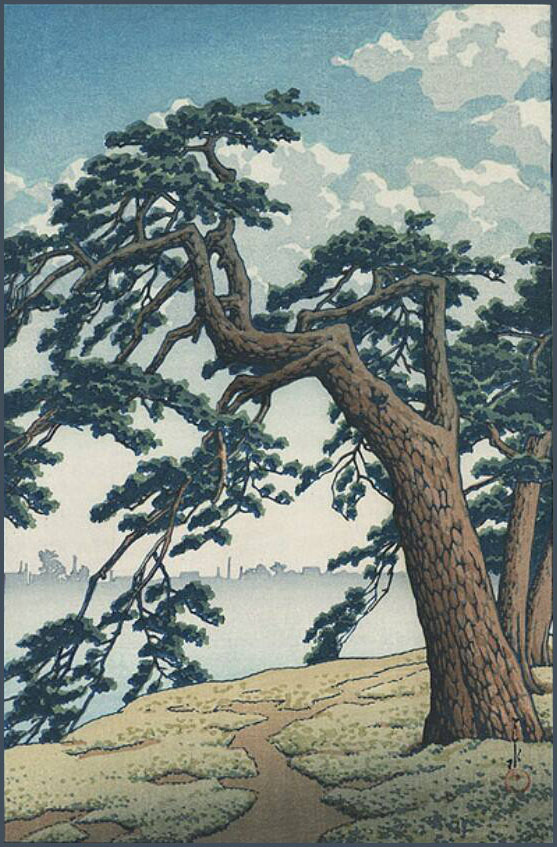 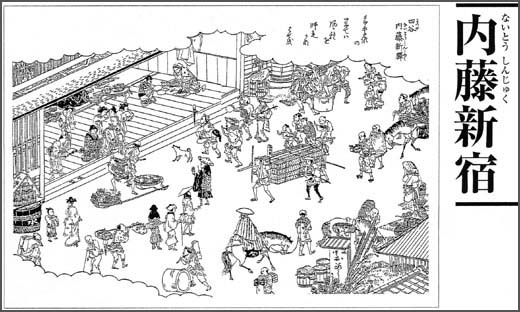 The town of Shinjuku dates from the late 17th century, when a post-station was set up there
on the Koshu-kaido on the northwestern edge of Edo (present-day Tokyo).
To the south, Yoyogi was then mainly sparsely populated hills that rolled on as far as the eye could see. 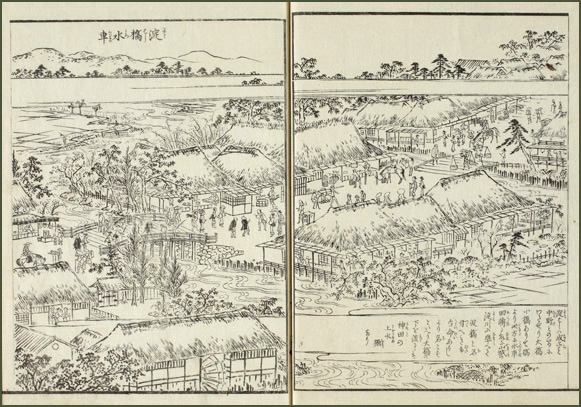 Yodobashi is said to be the oldest bridge built across Kanda aqueduct.
It is said that when the third shogun Tokugawa Iemitsu performed falcon hunting in this place, the surrounding scenery reminded him of the place called Yodo in Yamashiro (Kyoto) and so ordered that the place be called Yodobashi.
There was a water wheel (Mizuguruma) nearby for hulling the rice and wheat from neighboring farming villages.
source : library.metro.tokyo.jp...

- quote -
in the Edo Period this area of the Ōmekaidō west of the Kanda river was part of
Yodobashi Mura 淀橋村 (Yodobashi Village).
Supposedly, the 3rd Tokugawa shōgun, Iemitsu named this area.
The bridge used to be called Sugata-mizu no Hashi 姿見ずの橋 (Invisible Figures Bridge).
The reason was that in this area there was a legend that a certain Suzuki Kūrō (1371-1440) – the so-called “Tycoon of Nakano” – who hid his vast fortunes underground here. While burying his treasure, he became paranoid that the people helping him dig and carry the money might try to come back to steal his money. So, he killed the dudes who helped him bury it and threw their corpses into the river. People in the town saw a group of figures (姿) go over the bridge, but only one figure (姿) came back. So they named it the “Invisible Figures Bridge".
The Tokugawa shōguns used to make a long journey from Edo Castle to Mitaka for falconry. One time, Iemitsu and his entourage rested their horses by the bridge and heard the local story about the bridge’s inauspicious name. He thought it was an unlucky name for the bridge. The view of the river crossing reminded him of the Yodogawa 淀川 (Yodo River) in Kyōto and so he commanded the people to name the bridge Yodobashi 淀橋 (Yodo Bridge).
Of course, it was a great honor for the people to have the shōgun rename their bridge, so they started to call their town Yodobashi. The famous electronics store, Yodobashi Camera began in the area that is now Shinjuku Nishiguchi. The name of the store and area comes from this bridge.
Actually this area made up a ward called 淀橋区 Yodobashi-ku, but was merged with 四谷区 Yotsuya-ku in the 1947 restructuring into the 23 Special Wards. The merged area became present day 新宿区 Shinjuku-ku.
- source : japanthis.com/2011... - 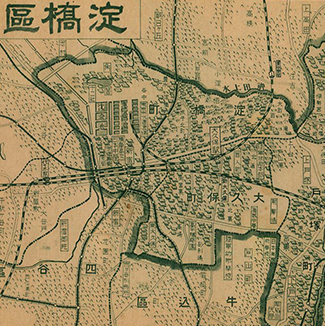 . Legends from Shinjuku ward .
Yotsuya Kaidan and many more

Email ThisBlogThis!Share to TwitterShare to FacebookShare to Pinterest
Labels: - - - Haiku and Hokku, - - - Places and power spots