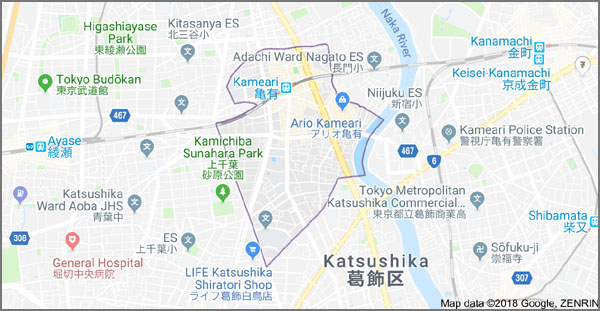 kame 亀 turtle / ari 有 there is
During the Muromachi period, this area was called Kamenashi （亀無、亀梨) "no turtle".
At the confluence of the former river 隅田川 Sumidagawa and 葛西川 Katsushikagawa there was a small island in the form of a turtle.
In 1644 the people living there did not like the name NASHI and changed it to ARI.

In 1889, 青戸村 Aoto village was merged with 亀有村 Kameari village、砂原村（西亀有付近）、上千葉村 as the village 東京府南葛飾郡亀青村 Kameao mura.
In 1918, 青砥駅 Aoto station was built.
In 1932, when the ward of Katsushika was created, 青戸町1 - 4丁 Aoto cho was allocated from the first to the fourth sub-district.
. Aoto 青砥 / 青戸 Aoto district, Katsushika .

- quote
The area is perhaps best known for being the location of the long-running manga and anime series
こちら葛飾区亀有公園前派出所 Kochira Katsushika-ku Kameari Kōen-mae Hashutsujo
about the misadventures of a cranky middle-aged policeman working in a police box next to Kameari Park.
- source : tokyocheapo.com... 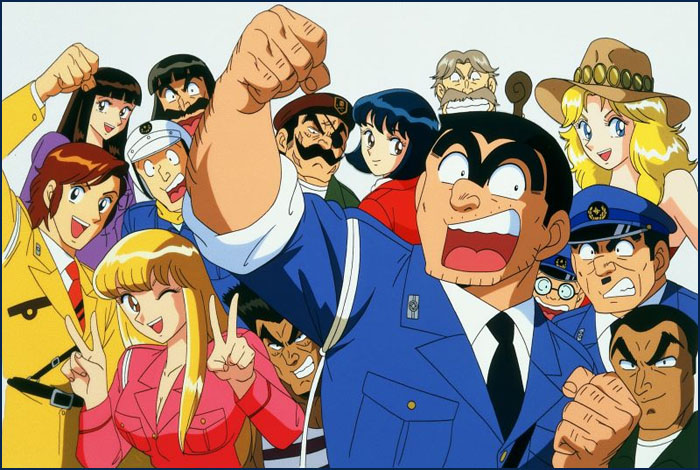 - quote -
Kochira Katsushika-ku Kameari Kōen Mae Hashutsujo (こちら葛飾区亀有公園前派出所,
lit. "This is the Police Station in Front of Kameari Park in Katsushika Ward"),
often shortened to KochiKame (こち亀), is a Japanese comedy manga series written and illustrated by Osamu Akimoto. It takes place in the present day, in and around a neighborhood police station (kōban) in the downtown part of Tokyo, and revolves around the misadventures of middle-aged cop Kankichi Ryotsu. The official English title is KochiKame: Tokyo Beat Cops.

It was continuously serialized in Weekly Shōnen Jump for 40 years, from September 1976 to September 2016. Its 1,960 chapters were collected into 200 tankōbon volumes, making it the manga series with the highest number of volumes. The manga has been adapted into an anime television series, produced by Studio Gallop and broadcast in Japan by Fuji TV, three theatrical animated films (by Tatsunoko and Gallop, respectively), two live-action movies, several stage adaptations, and a live-action television series. As of 2014, the series had sold over 157 million tankōbon copies, making KochiKame one of the best-selling manga series in history. In 2005, TV Asahi named the anime number 36 on its list of the Top 100 Anime. The series was awarded a Guinness World Record for "Most volumes published for a single manga series."
... snip ...
Real-life KochiKame
The real neighborhood police station on which the manga one is based.
Kameari Koen is an actual park in Tokyo's Katsushika ward. The police station is fictional, but it is modeled after a real one located on the north side of Kameari railway station. The manga has brought considerable fame to the neighborhood, and it draws sightseers from all over Japan to a (usually vacant) station in a nondescript residential neighborhood. There is only a vacant lot where the police station is actually supposed to be located.
In February 2006, two life-size bronze statues of Ryo-san were erected at the north and south gates of Kameari Station. There is currently a trail of 14 statues in the area.
- - - More in the WIKIPEDIA ! 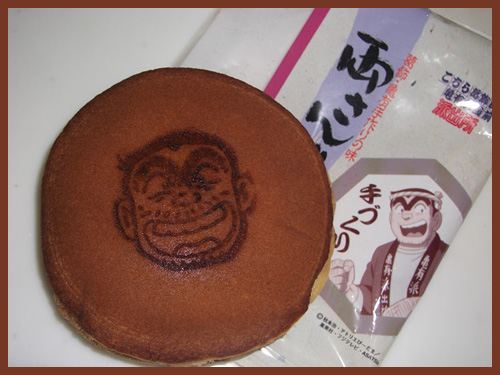 As the popularity of this district was falling, the local merchants thought of using KochiKame for their revitalization programs.
They asked the publisher of the manga for agreement, but he refused. Then they asked the author of "KochiKame" and he was quite pleased.
They begun to make Kochikame dorayaki sweets and statues of Kochikame at the station, at benches in the park and other places. Now visitors could take photos and as Instagram flourished, so florished Kameari.
Now a KochiKame character walks along the shopping street on Saturday and Sunday and they have popular drum concerts at the station. 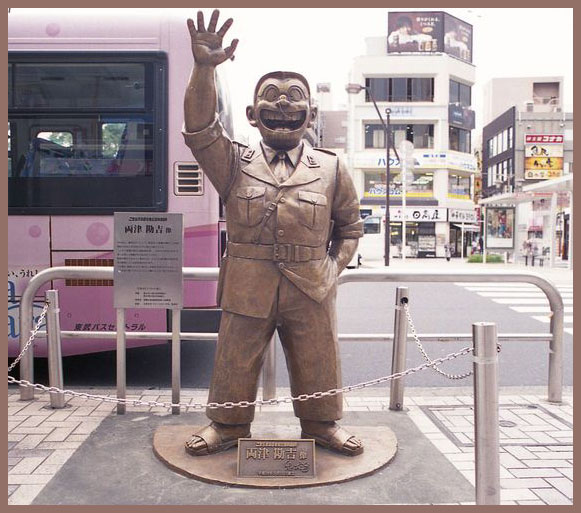 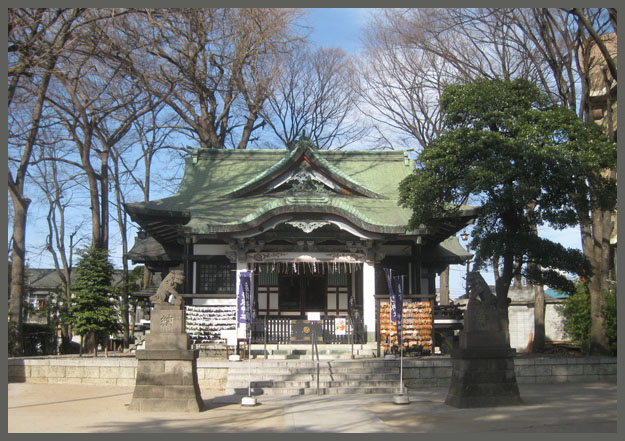 This shrine has two large turtles instead of Komainu guardian dogs at its entrance. 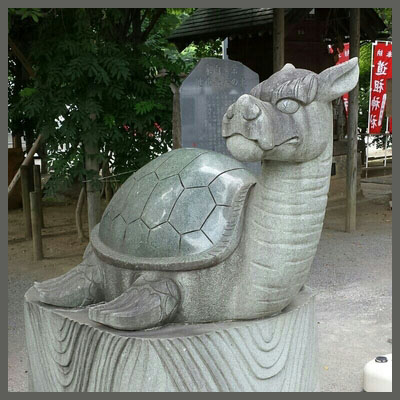 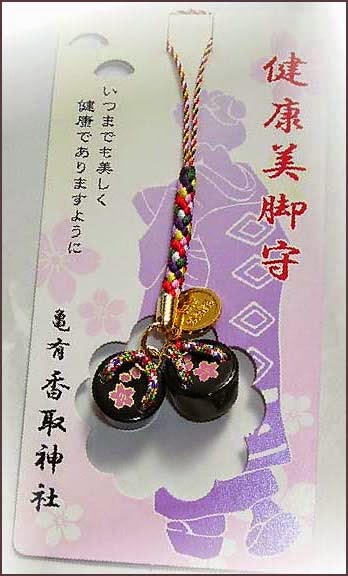 The patron Shrine of the village 砂原村 Sawaramura in the Edo period.
The main deity is Dairokuten.
Re-named Takagi Shrine in the Meiji period. 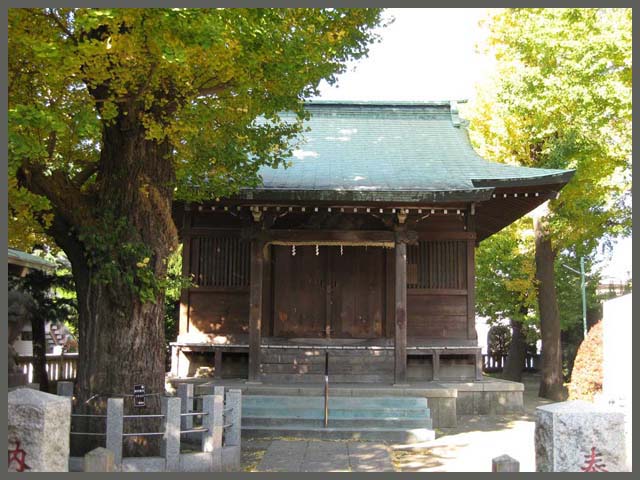