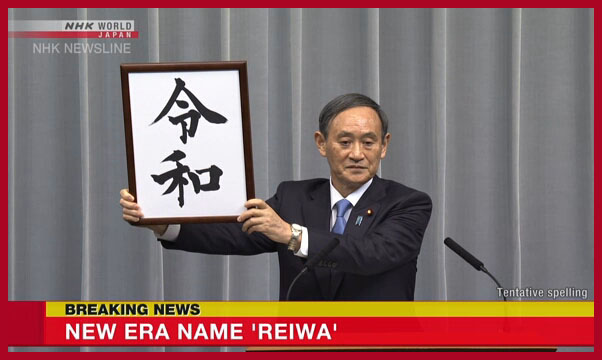 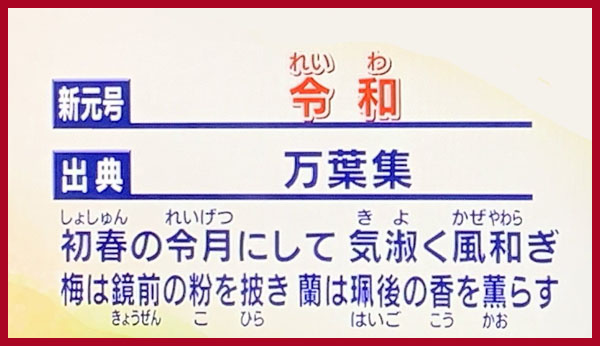 - quote -
"On a moon-lit night in early spring, the air is fresh and the wind is calm,
the plum flowers are blooming like a beautiful woman
applying white powder in front of the mirror,
and the fragrance of the flowers are like that of robes scented with incense."


It is during the month of good fortune ("rei"), when the air is auspicious, the winds are gentle/harmonious ("wa"),
and the plum flowers blossoming like makeup applied to a beauty resplendent before a mirror, and the orchids adorning themselves in their scent.

The above is not a poem in the Manyo-Shu, but the title of a collection of 16 poems about plum blossoms.


Government announces new era name: 'Reiwa'
'Reiwa' -- tentative spelling -- is a name that will be on the lips of most Japanese today and it will be for years to come.
It's the name the Japanese government selected for the new era, which is set to start when Crown Prince Naruhito becomes the new Emperor on May 1.
The announcement was highly anticipated here because it will define the years ahead, as well as play a daily role in people's lives.
Chief Cabinet Secretary Yoshihide Suga revealed the name saying, " The new era name is 'Reiwa'," and how it's written in Kanji characters.
Those letters come from Manyoshu, the oldest existing anthology of Japanese poetry.
The Cabinet chose the name from a list of proposals made by experts. The government is refraining from disclosing their identities of the experts.
Emperor Akihito is set to abdicate on April 30, which will end the current Heisei era.
The government is announcing the new name in advance, so companies and the general public can prepare for the change.
The era name is used on numerous occasions and official papers, including drivers' licenses, health insurance cards, and calendars.
- reference source : NHK world news -


- quote -
... TV commentators struggled to offer a direct translation, but the two characters, taken from Man’yoshu, the oldest existing anthology of Japanese poetry, mean “decree” and “peace.” It is unusual for a gengo to be taken from a Japanese, rather than Chinese, work of classical literature.
Earlier,
the prime minister, Shinzo Abe, told reporters he believed the process would produce a new era name that
“would lead to a new era brimming with hope”.
- source : theguardian.com... -


- quote -
The Reiwa period (Japanese: 令和時代 Reiwa jidai)
will be the next era of Japan. The period is expected to start on 1 May 2019, the day when Emperor Akihito's son, Naruhito, will ascend to the throne as the 126th Emperor.
Emperor Akihito is expected to abdicate the Chrysanthemum Throne on 30 April 2019, marking the end of Heisei period.
Thus, 2019 corresponds to Heisei 31 until 30 April, and Reiwa 1 (令和元年 Reiwa gannen, "first year of Reiwa") from 1 May.
It is the first Japanese era name of which the characters were taken from Japanese classical literature instead of Chinese literature
..... the name marks the 248th era name designated in Japanese history. While the "wa" character 和 has been used in 19 previous era names, the "rei" character 令 has never appeared before.
- source : wikipedia -

- quote -
Five other era name candidates identified
NHK has learned the five proposed names that were not selected to represent Japan's next Imperial era.
The government announced on Monday that the next era, set to begin on May 1 when Crown Prince Naruhito ascends to the throne, will be known as "Reiwa."

The government selected the six candidates from expert submissions. After discussing them with a special panel and the heads of both houses of the Diet on Monday, the government decided on "Reiwa" at a Cabinet meeting.
The six candidates were selected because the characters were easy to read and write, a criteria considered in Imperial era names.
"Eiko" was sourced from classical Japanese literature, while "Koshi" was derived from both Japanese and Chinese classics. They are "The Chronicles of Japan" and "The Classic of Poetry" from "The Four Books and Five Classics," a collection that contains the basic teachings of Confucius.
Chinese classics are included in the sources for "Kyuka," "Banna" and "Banpo."

The government says it will not disclose the name of the person who proposed "Reiwa," but it is believed to be Japanese literary scholar Susumu Nakanishi.
He specializes in "Manyoshu," the oldest existing anthology of Japanese poetry and source of the selected name.
Nakanishi is a Professor Emeritus at the International Research Center for Japanese Studies.
- reference source : NHK news-


Changing the Calendar
Ross Bender
... the Nara Japan is conspicuous for its peculiar chelonian nengō :
Reiki 霊亀 (715– 717), Jinki 神亀 (724–729), and Hōki 宝亀 (770–781) — all inspired by the appearance of sacred tortoises.
The Tenpyō 天平 era name was inspired by characters engraved on the carapace of an unusual tortoise.
Both the Keiun 慶雲 (704–708) and Jingo Keiun 神護景雲 (767–770) eras acquired their names from the awesome manifestation of unusually colored clouds.
In the case of the change from Tenpyō Shōhō 天平勝宝 (749–756) to Tenpyō Hōji 天平宝字 (757–765) during the reign of Kōken Tennō, the auspicious event was a fantastic oracle woven on the cocoon of a silkworm—sixteen “jeweled characters” interpreted by court officials as prophesying long life for the empress and peace in the realm after the tumultuous events of the Naramaro conspiracy.
But Shoku Nihongi describes not only this pivotal miraculous omen, it also records a number of imperial edicts highlighting the political theology of the court. The content of these edicts evidences the various theological strands— native, Buddhist, and Confucian—woven into the intellectual tapestry of the emerging ideology of the Nara state as the court weighed the significance of the intervention of the gods into human affairs and continued to articulate theories of divine legitimation for imperial power.
- source : Japanese Journal of Religious Studies -

The Three Palace Sanctuaries (宮中三殿 Kyūchū sanden) are a group of structures in the precincts of the Imperial Palace in Tokyo, Japan. They are used in imperial religious ceremonies, including weddings and enthronements.

• Kashiko-dokoro (賢所) – the central shrine, enshrining a replica of the mirror Yata no Kagami, representing the mythological ancestress of the Imperial Family, Amaterasu. (For the enthronements in Kyoto of Emperor Taishō in 1915 and of Emperor Shōwa in 1928, the mirror was transported by special rolling stock known as the Kashiko-dokoro Jōgyosha (賢所乗御車) from the name of this sanctuary.) The Yasakani no magatama or Sacred Jewel, one of the Imperial Regalia of Japan, is also said to be housed in the Kashiko-dokoro.
• Kōrei-den (皇霊殿) – the Ancestral Spirits Sanctuary, enshrining the departed spirits of the Imperial Family from one year after their death.
• Shin-den (神殿) – the Sanctuary of the Kami, enshrining the Amatsukami (天津神) from Takamagahara and the Kunitsukami (国津神) from Japanese mythology.

the "Ama-tsu-kami" and "Kuni-tsu-kami" that in combination make up the "Yaoyorozu no kami" or countless/myrade deities) in a broad and general way, but it also and more specifically houses the so-called "Hasshin 八神" or eight guardian deities of the emperor, which are:
Kami-musubi no kami 神産日神, Taka-mimusubi no kami 高御産日神, Tamatsume-musubi no kami 玉積産日神, Iku-musubi no kami 生産日神, Taru-musubi no kami 足産日神, Ômiya-no-me no kami 大宮売神, Miketsu no kami 御食津神, and Kotoshiro-nushi no kami 事代主神.
Traditionally, the deities of heaven and earth had been placed under the care of the Yoshida family while the emperor’s eight guardian deities were under the custody of the Shirakawa family (worshiped at Jingikan's Hasshin-den 八神殿).
From 1872 onward, they were worshiped together at this new shrine within the imperial court.

More articles about the translation of REIWA appear here and there.
The most precise seems to be

- quote Michael Kanke
Not too late to choose a new era name
Like many others, I awaited with excitement the unveiling of Japan’s new era name on April 1. Sadly, upon learning the new name (Reiwa), I was shocked and deeply disappointed. While kanji can have diverse meanings, to me the first character is strongly associated with the meaning “rule; command,” which seems too intimidating to belong in an era name. In fact, that character hasn’t been used once in any of the 247 preceding era names.
Looking into the cited source,
I was surprised yet again. The characters were reported to come from “Manyoshu,” Japan’s oldest surviving poetry collection. While I was happy to see that Japan was, apparently for the first time, using one of its own ancient documents to compose an era name, upon researching the specific passage cited as the source, I discovered that, curiously, it is not a poem. Rather, it is the prefatory text that precedes a collection of 32 poems composed during a plum-blossom viewing banquet. This text describes the site of the banquet, and the conditions under which the banquet guests composed their poems.
A poetry collection was used as the source, but not any of the thousands of poems within it?
Furthermore,
the two characters chosen from that passage do not have the same degree of balance and relationship with each other as did, say, those chosen to form the previous era name: Heisei.
These factors make this name choice highly suspect. Taken together, they give the impression that the desired era name was chosen first, and then a passage was found to provide a justification for the choice. Furthermore, as the second character is sometimes used to represent “Japan,” this name allows for an alternate, menacing interpretation: “Rule Japan.”
For recent eras,
the new name was not announced until the time of enthronement of a new emperor. As that event is still a few weeks away, it is certainly not too late to change the name. I strongly urge the Japanese people to understand how this choice was made, and to question its validity. There is still time to replace this flawed era name before it takes effect.
MICHAEL KANKE
- source : Japan Times April 05 -