quote
Edo (江戸, Edo, literally "bay-entrance" or "estuary"),
also romanized as Yedo or Yeddo, is the former name of the Japanese capital Tokyo. It was the seat of power for the Tokugawa shogunate, which ruled Japan from 1603 to 1868. During this period it grew to become one of the largest cities in the world and home to an urban culture centered on the notion of a "floating world".

From the establishment of the Tokugawa bakufu's headquarters at Edo, although Kyoto remained the formal capital of the country the de facto capital was now Edo; it was the center of political power. Edo grew from what had been a small, little-known fishing village in 1457 to a metropolis with an estimated population of 1,000,000 by 1721 (the largest city in the world at the time).

Edo was repeatedly devastated by fires, with the Great Fire of Meireki in 1657 (in which an estimated 100,000 people died) the most disastrous. During the Edo period there were about 100 fires (most begun by accident, often quickly escalating and spreading through neighbourhoods of wooden machiya which were heated with charcoal fires. Between 1600 and 1945, Edo/Tokyo was leveled every 25–50 years or so by fire, earthquakes, tsunami, volcanic eruptions or war.

In 1868, when the shogunate came to an end, the city was renamed Tokyo ("eastern capital"). The emperor moved his residence to Tokyo, making the city the formal capital of Japan:

Government
During the Edo period, the shogunate appointed administrators (machi bugyō) with jurisdiction over the police and (beginning with the rule of Tokugawa Yoshimune) the fire department (machibikeshi).
The machi bugyō, machi bugyooheard criminal and civil suits, and performed other administrative functions. 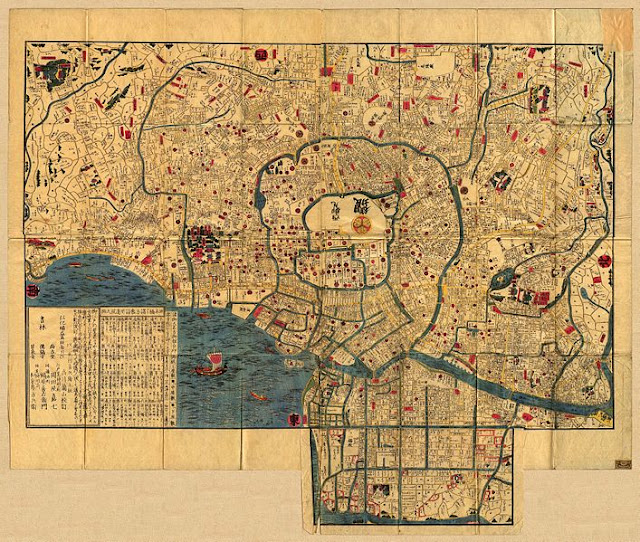 The city was laid out as a castle town around Edo Castle.
The area surrounding the castle (known as the Yamanote) consisted largely of daimyō (feudal lords') mansions, whose families lived in Edo as part of the sankin kōtai system; the daimyō made journeys in alternating years to Edo, and used the mansions for their entourages. It was this extensive samurai (noble warrior class) population which defined the character of Edo, particularly in contrast to the two major cities of Kyoto and Osaka (neither of which were ruled by a daimyō or had a significant samurai population).
Kyoto's character was defined by the Imperial Court, the court nobles, its Buddhist temples and its history; Osaka was the country's commercial center, dominated by the chōnin (merchant class).

Areas further from the center were the domain of the chōnin (町人, literally "townsfolk"). The area known as Shitamachi (下町, lit. "lower town" or "downtown"), northeast of the castle, was a center of urban culture. The ancient Buddhist temple of Sensō-ji still stands in Asakusa, marking the center of an area of traditional Shitamachi culture. Some shops in the streets near the temple have existed continuously in the same location since the Edo period.

The Sumida River (then called the Great River, 大川), ran along the eastern edge of the city. The shogunate's official rice-storage warehouses, other official buildings and some of the city's best-known restaurants were located here.


The "Japan Bridge" (日本橋, Nihon-bashi) marked the center of the city's commercial center, an area also known as Kuramae (蔵前, "in front of the storehouses"). Fishermen, craftsmen and other producers and retailers operated here. Shippers managed ships to and from Osaka (known as tarubune) and other cities, bringing goods into the city or transferring them from sea routes to river barges or land routes such as the Tōkaidō (which began there). This area remains the center of Tokyo's financial and business district.

The northeastern corner of the city, considered a dangerous direction in traditional onmyōdō (cosmology), is guarded from evil by a number of temples (including Sensō-ji and Kan'ei-ji). Beyond this were the districts of the eta (outcasts), who performed "unclean" work and were separated from the main parts of the city. A long dirt path extended west from the riverbank (a short distance north of the eta districts), leading along the northern edge of the city to the Yoshiwara pleasure districts. Previously located within the city proper (near Asakusa), the districts were rebuilt in this more-remote location after the Meireki Fire of 1657.

© More in the WIKIPEDIA ! 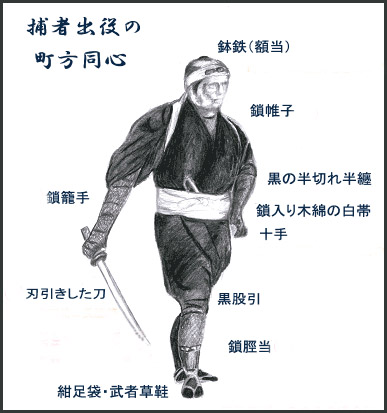