Issa uses quite a lot of them.

. Onomatopoetic Words in Haiku and Kigo .


This warm-hearted autumn hokku was written in the 7th month (August), when Issa was traveling around the area just east of Edo. It's about one or more convolvulus flowers, which are members of the morning glory family, though they differ slightly from morning glories in the narrow sense, which in Japanese are called "morning faces." Convolvulus open at the same time as morning glories but stay open a little longer, until about 1 p.m., when they begin to close, and they are literally called "noon faces." Another close relation, moonflowers, are literally "evening faces" in Japanese. The English names don't do justice to noontime morning glories, so I thought of using "noonflower," but "noon morning glory" seems a little better.

The words gitcho, gitchon, giitsu, gittsu, giricho, kitcho, kiitcho are onomatopoetic colloquial words meaning "insect" that are still heard in many local dialects around Japan, including local dialects in and around greater Tokyo, called Edo in Issa's time, and in areas ringing Tokyo, including the area Issa is visiting when he writes this hokku. It's quite likely that Issa is using giitcho in this hokku to express the pronunciation of the people he speaks with on his trip, and I take that to be his meaning. Issa uses katakana syllabary symbols to write this word, indicating that he is trying to reproduce a special sound, apparently the pronunciation of the local word for insect/bug, as opposed to the standard word for insect, mushi, which he uses in the second line. The local word has a long consonant in it, indicated by -tsu-, that is Romanized as -tch-.

The key to this hokku seems to be mo, or "too." For an insect to be making this sound is normal, but Issa says that someone or something else is also making the sound. Since the sound is very close to words for "insect" in many local dialects, I take Issa to be implying that a speaker of the local dialect is looking at an insect perched in or on a noon-blooming morning glory and is either imitating its cry or addressing it. Since the person is simply crying out geetcho! geetcho! I take it to be a child or a group of children who have spotted an insect in or on the trumpet-shaped flower. To the child who cries "Bug, bug!" (geetcho! geetcho!), the repetition of the local word word for "bug" is simply an exclamation or a vigorous address, "Hey bug, hey bug!" To the insect, however, geetcho-geetcho is an onomatopoetic rendering of the sound it naturally makes. What seems to attract Issa is that for a moment both the child and the insect are saying the same thing to each other -- sharing exactly the same words -- as if they were having a heartfelt dialog and communicating with each other. Could this be a momentary glimpse of the Pure Land on earth? 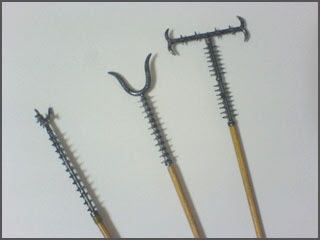 The sound of a guard walking around the neighborhood -- or perhaps around a temple where Issa is staying -- and hitting his long, six-foot pole on stone sections of streets or temple walkways was a sound that projected strength. The guards, usually armed night watchmen, were a supplement sent by samurai officials to local areas of a city or town if there was an emergency or a desire to reassert authority. Homeowners were required to belong to groups of five and take responsibility for the block they lived on in terms of fire and crime prevention, and they generally acted as mediators between the authorities and those on the block who were just renting space. In some cases, however, these block-level groups were not sufficient, and the guards with long poles were sent. In addition to city streets, the guards also regularly patrolled Buddhist temples, Shinto shrines, and various kinds of mines.

The guards hit stone areas or rocks as they walked along as a warning to the people in the area and as an expression of power and authority. They would strike their long poles hard against stone surfaces, making a short, sharp, low sound that must have reverberated strongly if not menacingly to the people living nearby. The sound of pounding stakes into the ground would perhaps have been a somewhat similar though even stronger banging sound. Issa uses an onomatopoetic reduplicated phrase, kan-kan, an expression for two hard objects hitting together, to express this sharp yet dull and reverberating sound. He also uses another kan ('the cold winter season') to begin the third line, creating a series: kan-kan-kan.

By giving the third kan two meanings, and by overlapping the sound of hitting (-tsuki) with the moon (tsuki), Issa captures the way the hard banging sounds of the pole against stone go on and on, and at the same time he extends this strong, reverberating sound to the moon: viewing it while hearing the pole sounds (-tsuki) makes the moon (tsuki) seem even sharper and more piercing than usual as it transforms the sound and hits (-tsuki) back, as it were, at the viewer through the clear winter sky. This word-overlapping gives the whole hokku a double sense. On the one hand, the ominous sounds of samurai authority made by the long pole seem to hit and threaten not only the sensibility of commoners in Edo but even the moon above. On the other hand, the sharp, clearly visible crescent moon seems to respond in kind, looking unbearably piercing and moving tonight as its light resonates synesthetically with the sharp, hard sounds of the pole, thereby allowing moonlight to physically strike or hit the bodies as well as the minds of those who view the moon. I think Issa feels physically hit and reverberated by this moon, slender though it is. Or perhaps its slender arc makes it seem even more piercing.

hey, it's cold!
you there in the eaves....
cicada, red peppers
Tr. Chris Drake

This kind of cicada sings just before dawn, right after sundown, or when it's darkly overcast, and its name is similar to a phrase in Japanese meaning "live day to day" or "live hand to mouth." It's said to easily stir human emotions, creating a melancholy or lonely mood of time passing. According to one folk etymology, higurashi means "cicada that ends the day." These autumn cicadas tend to stay away from humans, so in this hokku a single cicada might be the image Issa is thinking of.

In the highlands of Shinano fall is short and winter comes early and decisively. In the hokku, red peppers are hanging from the eaves, drying and turning color on strings before being ground up. An autumn cicada happens to visit the same eaves. Is the exclamation in the form of an address in the first line Issa speaking to the cicada and the dangling cayenne peppers? He could be asking them if they realize that fall is ending and their time is almost up -- and reminding himself of the same thing. That's the way I've translated the hokku. Or are the cicada and peppers the subject of the address and Issa the addressee? Grammatically it isn't clear. For example, does the cicada song sound as if the cicada feels cold, thus making the listener Issa feel even colder as the day and autumn come to an end? In this case the second line of the translation would be "you there down below" or "you there on the porch," etc.

The similarity of the sounds higurashi and tougarashi and the similarity of the locations of the actual objects are a bit uncanny, creating synesthesia between the biting cold, the sound of the cicada, and the sharp implied taste of peppers, as if it were possible to hear and taste winter before it arrives and to feel a kinship between cicadas and peppers and the humans who name them. The cicada sings, the human sings in a goofy way by composing a hokku, and so the implied question seems to be: what exactly is the silent-sounding song of the peppers?

This is a revised translation of the provisional translation of Issa's hokku I posted on 2/22/2013. The words in Issa's text that I put in brackets then, [kadode] or "leaving," are clearly wrong and not what Issa intended.

This hokku is from the 2nd month (March) of 1819, the year described in Issa's Year of My Life (Oraga haru). The hokku was written while Issa was traveling around in an area not far from his hometown. The first line implies that the house fading into mist is the last house Issa leaves, which suggests that he's stopped at one or more other houses earlier to say goodbye. Issa actually has several students in the area around Zenkoji Temple, where he's been since late in the 1st month, so he may be saying farewell to some of them. After he finishes his farewells at the last house he visits, he leaves town, and the spring mist gradually comes between him and those he has just been with. Now, just when he thinks he's alone with the mist, something strange happens.

Earlier I was unsure how to read the repeated word 逆逆, but I was able to contact the Issa scholar Maruyama Kazuhiko, who reads the repeated words saka saka. This isn't a known phrase, so Issa must be repeating the word saka, 'in reverse, backwards, opposite' to strengthen its effect. As the last house in the village fades into the mist, the sounds coming from it begin to grow stronger and clearer, distorting Issa's normal sense of perspective and perhaps creating momentary disorientation, as if walking forward were the same as walking backwards. Using "in reverse" also makes sight and sound equal but opposite here, thus giving a lot of existential weight to sounds, as if they could recreate the house that has been lost from sight. Perhaps the sounds grow clearer because there are fewer visible images to distract Issa's attention, or perhaps the sounds of people at the house are getting louder. Perhaps Issa or his persona in the hokku is lonely and now, for a short time, feels as if he's returning back to the house, where he can hear people talking about his leaving. The third line is almost onomatopoetic, and the repetition of 'a' and 'k' gives readers a feel for how clear the sounds are to Issa. The six syllables in the last line seem intentional, since they create a physical suggestion of how strong the sounds are becoming.

Issa uses a similar image in one other hokku, also from the 2nd month of 1819:

houseboats
fade into the mist
unlike their sounds

Issa uses mist, though a bit differently, in an early hokku about love from 1794, when he was traveling around Kyushu and far-western Honshu. This hokku, apparently in the third person, depicts a man leaving his lover at dawn. It uses a word from classical waka, kinu-ginu, to evoke a man secretly visiting his lover's house and then leaving as soon as the birds begin singing the next morning in order to avoid being detected, and it refers to the woman with the classical word imo. It seems to have been written on a topic, since it has a classical phrase placed before it:

The man tries to leave quickly and inconspicuously, yet he walks slowly and keeps looking back until the woman's house is no longer visible in the mist. And the mist allows his mind to return back and linger even longer. Here, however, the images are visual, and his lover's voice does not grow stronger as the mist grows thicker.