they try to lend me
fancy New Year's clothes
to show off at dawn
Tr. Chris Drake

This humorous hokku was written on the first of the 9th month (October) of 1803, four months before New Year's, so Issa is apparently talking about the future and what he'll do or won't do at dawn on the first day of the coming new year. There is no tense in the hokku, so in English it could be either in the present or the future tense. The hokku as a whole is a reply to an ancient Chinese poem, and my translation is of the whole reply.

The headnote of the hokku is the title of poem 133 (see translation below) in the ancient Chinese Book of Poems or Book of Odes (詩経), which Issa began studying five months before he wrote this hokku. If you read the Chinese poem, it's clear that "clothes" means the proper clothes, that is, military or fighting clothes and equipment. The poem is written from the point of view of the king of the aggressive Qin (or Ch'in) kingdom, which later gained control of China for a short time. Putting aside possible allegorical layers of meaning and reading the poem straightforwardly, as Issa probably did, one of the Qin king's officials is trying to persuade former war heroes ("you") to once again put on fighting clothes and equipment and help the king carry out a new military campaign. Many of the former warriors seem to be resisting the idea of going back to war, however, claiming they no longer have any fighting clothes or equipment and therefore can't join in. Not having the proper clothes is of course an indirect expression that allows the warriors to avoid going to war without having to say so.

By placing the title of the ironic Chinese poem next to his hokku, Issa puts himself in the position of the former warriors in the poem who want to avoid going to war again. The Qin king's point of view is represented by people around Issa who want him to get the proper nice robes to wear at New Year's so he can go around saying formal New Year's greetings to all sorts of people. When Issa was the assistant and scribe for the haikai master of the Katsushika school while he was in his twenties, he surely borrowed nice robes from the master to wear at formal meetings and on holidays, especially at New Year's, but after that Issa traveled like a vagabond around western Japan for several years, and even after his return to the Edo area he has barely been able to support himself.

Buying a samurai-style formal thick robe together with a two-part kami-shimo outer vest and trousers to wear at New Year's would have been out of the question at the time Issa wrote this hokku, and his friends may have been kidding him about his informal clothing, asking him how he intends to become an established haikai master. Many merchants imitated samurai fashions and had at least one set of nice robes, and some of Issa's merchant students may also have suggested he "level up" his wardrobe.

Issa's hokku is apparently a humorous reply to his fashion critics. Thanks but no thanks, the hokku suggests. Issa no doubt likes formal duds about as much as he likes samurai armor and war, and, following the strategy of the resisting former warriors addressed in the Chinese poem, the hokku seems to be a roundabout way of saying there's no possible way anyone's going to get him to wear stiff, formal robes at New Year's. And in fact Issa's one hokku written on the next New Year's Day, four months after this hokku, says he's been lying around inside.

How shall it be said that you have no clothes ?
I will share my long robes with you.
The king is raising his forces ;
I will prepare my lance and spear,
And will be your comrade.

How shall it be said that you have no clothes ?
I will share my under clothes with you.
The king is raising his forces ;
I will prepare my spear and lance,
And will take the field with you.

How shall it be said that you have no clothes ?
I will share my lower garments with you.
The king is raising his forces ;
I will prepare my buffcoat and sharp weapons,
And will march along with you.
Tr. James Legge 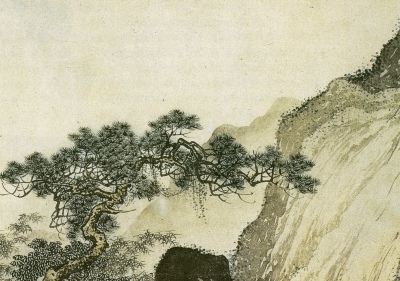