- part of the entry about
. Interior Design - The Japanese Home . 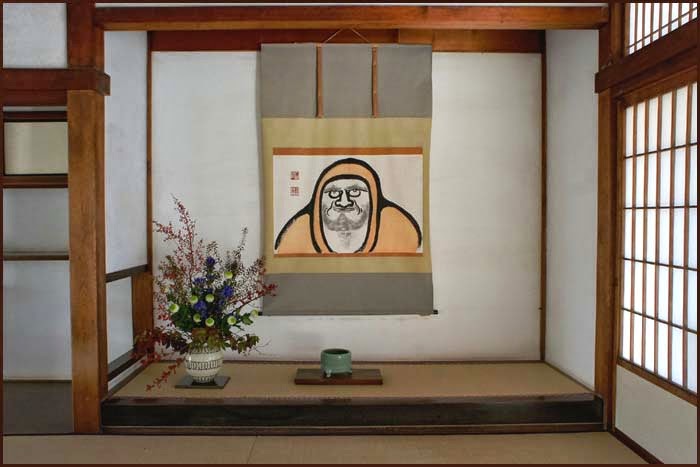 - - - More in the Japanese WIKIPEDIA !
tokonoma with a scroll of Daruma だるま

- quote
tokonoma 床の間 lit. alcove room.
A *tatami 畳 mat room with a small alcove. There are various theories about the origin of the alcove. It may have been a sleeping alcove, built just large enough for bedding. Later the alcove floor was raised above the level of the floor. The alcove was then enlarged to the size of two mats, and then it contracted again to one raised mat. The alcove thus became the honored seat for a guest of high rank. The other mat was placed at floor level. On occasion, a cozy alcove was formed by screens surrounding this type of arrangement. In the Kamakura period, to the latter part of the Muromachi period, the alcove had a raised floor and could be used as a seat or a platform.

By the end of the Kamakura period, a Buddhist picture was hung on the wall and was the focal point of the tokonoma. A board to display objects *oshi-ita 押板, was set before the wall hanging, on which were exhibited a vase of flowers, an incense burner and a candlestick. These three things are important to Buddhism and are referred to as the three implements, mitsugusoku 三具足.

In the Muromachi period, it became customary to hang a scroll with a Zen priest's calligraphic inscription, along with the vase of flowers and the incense burner. The candlestick was omitted then. By the Momoyama period, the alcove took on its familiar form and was used principally for displaying treasured art objects.

The size and arrangement of the alcove varied according to the diversified tastes of the tea masters. An old record, for instance, mentions an alcove 180cm long attached to a tea ceremony room *chashitsu 茶室 used by Murata Jukou 村田珠光 (1423-1502). This alcove was pasted with white Japanese paper called *torinokogami 鳥の子紙 and had frames that were covered with black laquer. Takeno Jouou 武野紹鴎 (1502-55) preferred a smaller alcove and tea ceremony room. Sen Rikyuu 千利休 (1522-91) used alcoves with styles familiar today.

Characteristics from both the *shoin 書院 style alcoves and the styles of alcoves found in tea architecture were fused to produce the alcove common to ordinary dwellings. Tokonoma are called a great variety of names such as
kamizadoko上座床 (lit. upper seat alcove), and
shimozadoko下座床 (lit. lower seat alcove).

Sometimes tokonoma are named after the tea master who designed them, for example *oribedoko 織部床,
or for the particular width of the alcove, such as *daimedoko 台目床. 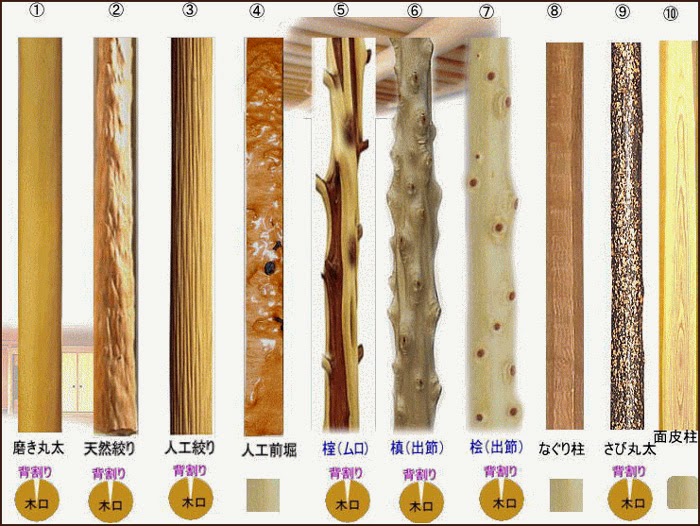 - quote
Tokobashira 床柱 alcove post
Also called nihonbashira 二本柱, because originally both the pillars to the left and right of the alcove, *tokonoma 床の間, were considered as central pillars.

The pillar closest to the center of the tea ceremony room, and the second of two pillars dictate the width of the alcove. As in formal shoin style *shoin-zukuri 書院造 tea ceremony rooms, tokobashira are chamfered. They are made of cypress or rarer woods. In semi-formal rustic type tea ceremony rooms, pine, maple, mulberry, sandalwood and ebony are employed. In the simplest, most unpretentious style tea ceremony rooms, polished logs of Japanese cedar, chestnut, bamboo and other unusual kinds of timber are used.

The diary MATSUO NIKKI 松尾日記, mid. 19c, states that the alcove post which retained the bark was first used by Furuta Oribe 古田織部 (1554-1615). Even material from old historical buildings was sometimes used. Since the alcove pillar is an important part of the interior design, in *sukiya 数奇屋 style tea houses it occasionally bears the marks of having been scraped by an adze to give it a rough finish.

Chamfered posts were used to produce a dignified appearance in *shoin 書院 rooms. There are many extant examples of alcove pillars in tea ceremony rooms dating from the late 16c-early 17c that were made of chestnut wood with an adze finish.
- source : JAANUS 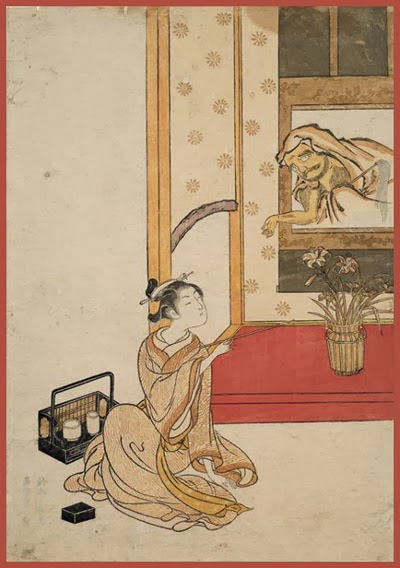 Giving Daruma a smoke.
Present only as a painting on a hanging scroll in the tokonoma, Daruma is stirred to life by a courtesan. As he leans toward her, she turns and offers him her pipe.
Ink Sketch. Farland Collection
http://wwar.com/masters/s/suzuki_harunobu.html

. Daruma and the Courtesans 芸者,花魁とだるま、女だるま .


Noto Peninsula 能登半島 Noto Hantoo
ae no koto, aenokoto あえのこと / アエノコト / 饗事
Entertaining the God of the Fields
Nowadays there are few families who continue this ritual, which is passed on from father to son. It is an intangible cultural property of Japan and the UNESCO.

On November 5 of the old lunar calendar, now December 5, the God of the Fields is invited into the home by the elder of the family, clad in formal hakama trousers and a robe with the family crest. He gets a great offering from the harvest. The elder sits in front of the tokonoma, where a scroll with the blind deity is hung. He tells him all the things. One important item is a two-pronged large radish, to symbolize fertility. All food offerings are given in two portions, for the God of the Fields and his Wife. There are two sets of chopsticks for the deities.

. Ta no Kami, God of the Rice Fields 田の神さま .

Tsushima is an island between Japan and Korea, and was an important trade stop-over for the sea trade since olden times. Rice from the mainland came via this island to Japan.

In the "fields of the Gods" at Takuzutama Shrine (た くずたまじんじゃ 多久虫玉神社) there are 15 farmer families who keep the tradition. They cultivate the rice for offerings. Each family is leading the ceremonies for one year. After the harvest they prepare a large tawara straw bag with seed rice of the first harvest, called the "tanemomidawara 種籾俵" and hang it high in the tokonoma space for prayers.
They add some special seaweed, nezumi mo ねずみ藻, to the decoration to appease the god of the sea.
The deity in residence at the shrine is Takamimusubi no mikoto 高皇産霊尊 at a special shrine, Takamimusubi jinja 高御魂神社.

"Waiting for the moon" is an occasion when people gather on particular evenings of a lunar cycle (e.g. the seventeenth, nineteenth, twenty second, and twenty third) to eat, drink, and pay homage to the moon as they wait for it to appear. The gatherings are often organized by religious organizations known as kō, whose members assemble at their established meeting place (tōya, usually the organizer's home), hang a scroll of the moon god, Tsukuyomi no Mikoto 月讀尊, in the tokonoma alcove, light (a) votive candle(s), and wait for the moon to appear.
source : Iwai Hiroshi . Kokugakuin University 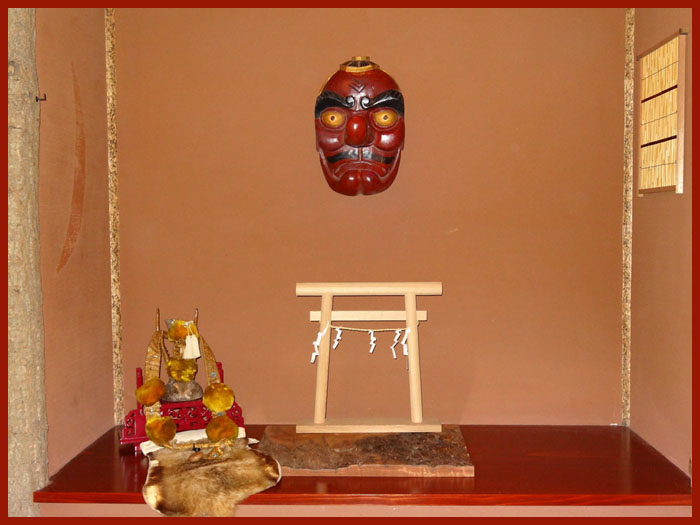 tokobashira 床柱 alcove post
Once a man went 奥道後 deep in the forest of Dogo and cut a tree to make an alcove post for his home.
But the man developed a high fever and died shortly after.
A diviner told the family that this was a divine tree and the man had been thrown around by a Tengu as punishment. 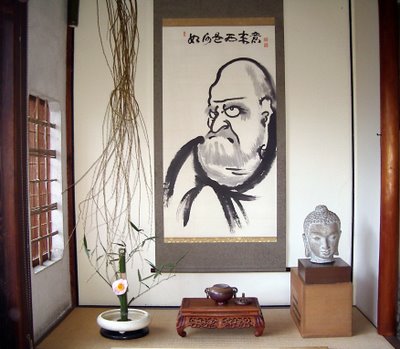 From a Japanese Meditating Room
Shared by a Daruma friend

. Kakejiku 掛け軸 Scroll and the Tokonoma .

double nine day -
we decorate Lladro-dolls
in the tokonoma 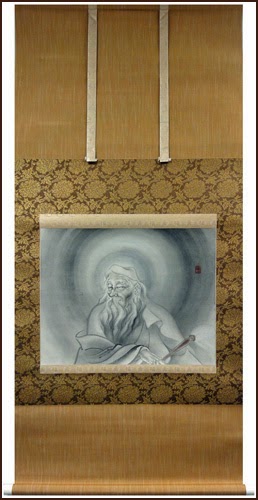 leaks from melted ice
make patterns on the wall
of the tokonoma . . . 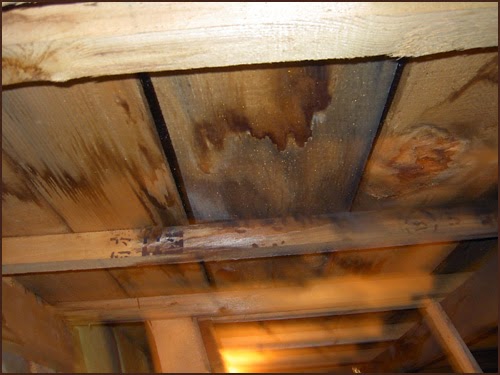 suga is dialect of Northern Japan. Snow and ice around the home begin to melt and leek through the apertures in the roof or windows or below doors. 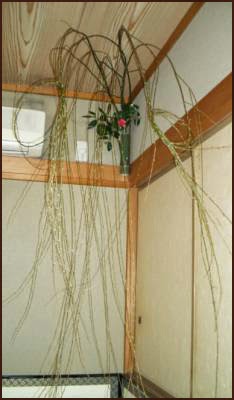 Willow branches are hung out of a freshly cut bamboo vase in the tokonoma or over the hearth before making the first fire. The longer the branches hang down, the better. Sometimes even up to 5 meters long ! Long branches are also wound together to a ring, as a celebration to the sun gaining new strength for the coming year.

. yanagi 柳 the willow and its kigo .

Legend from Shimane, Izumo
To the North-West of the Shrine 佐太神社 Sada Jinja there is a small inlay, 恵曇湾 the Etomo wan.
A priest named 板橋 Itabashi was on duty to get 竜蛇 a Ryuja white serpent from there.
Recently the fishermen from Etomo and Shimane find it from September till November.
Fishermen place it on sea weed and make an offering at the tokonoma 床の間 alcove in their home.
After that they bring it to the Shrine 佐太神社 Sada Jinja. Sometimes some sacred letters can be seen as a pattern on its find.
To catch such a fish will bring good luck and good business to the community.
.
https://heianperiodjapan.blogspot.com/2021/04/ryuja-dragon-serpent-legends.html
.